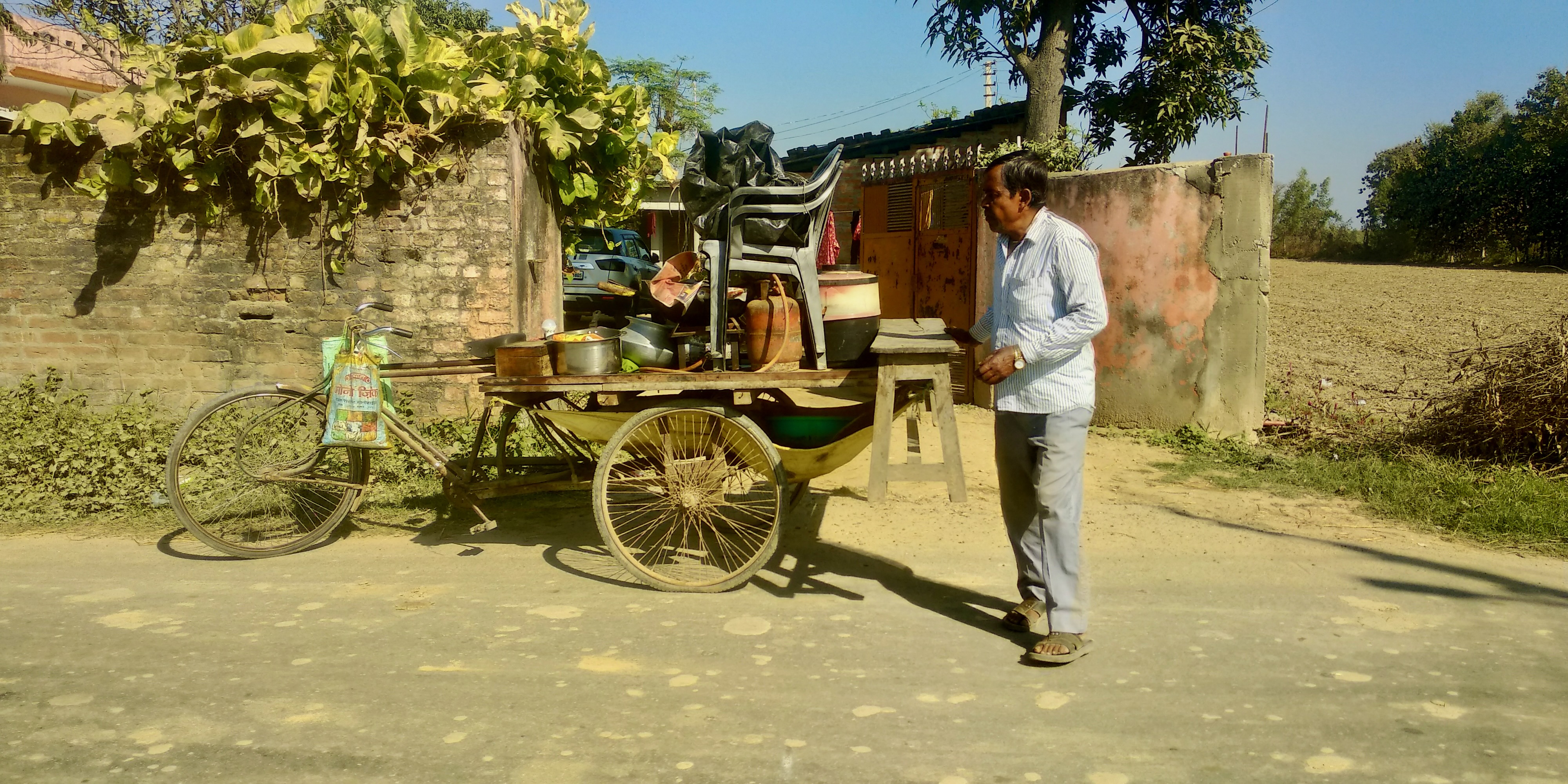 This story was originally reported and written in Hindi. PARI Education works with students, research scholars and educators across India who report, write and illustrate  for us in a language of their choice.

It is a sunny afternoon in Nanakmatta village and Manendar Majhumdar is busy frying chop pakoras in his shop. “For years, this has been my only source of income. Without it, I wouldn’t get my daily bread and you wouldn’t get your chop,” says the 60-year-old street vendor from Bengali Colony in Udham Singh Nagar district of Uttarakhand.

Manendar’s day begins at 5 a.m. After finishing household chores, Manendar steps out to shop for tamarind, gram flour and other everyday groceries. “I buy seven crates of eggs, which costs Rs. 1,200. I also spend  on cumin, coriander and chickpea flour.” On returning home, Manendar gets busy preparing for the food he sells, including making the chutney. He leaves for his shop around noon and works there till 8 p.m.

Manendar has been running his shop for eight years and his wife, Meenu Majhumdar, helps with shop-related work while handling  their domestic chores. “Without my wife’s help, I would not be able to run my shop,” he said. He has three daughters, all of whom are married, and two grandchildren. He does not wish to speak about his two sons, one of whom passed away.

A page in history books

Bengali Colony in Nanakmatta village where Manendar now lives, has a page in history books, but he and his family haven’t always lived here. When he was 11 years old, he used to live in a small village in Khulna district of East Pakistan (now Bangladesh), the name of which he does not remember anymore. He recalls an incident from 1964 when Bangladesh hadn’t yet separated from Pakistan but the freedom struggle was in progress. That year rioters had attacked Manendar’s predominantly Bengali neighbourhood and set fire to multiple houses including Manendar’s.

“I was at home and it must have been about four in the evening. My parents packed up all our clothes, utensils and food in bags, and we left our home,” says Manendar. On that cold September evening, the entire Majhumdar family and hundreds of others from their village fled their homes. Describing the scene, now five decades later, Manendar says, “Some places were on fire and there was fighting all around us. People were crying, fleeing their homes. Some were fleeing to the homes of their relatives, others to their acquaintances’ homes, and we came to India.”

Reaching the village of Gabhiya, some kilometres short of Pilibhit, the Majhumdar family started working as daily wage labourers. Only 11 years old, Manendar also worked as an agricultural labourer, earning two and a half rupees a day.

Potato chop or egg chop is a Bengali dish in which eggs or mashed potatoes are dipped in a batter of gram flour, corn flour, baking soda and assorted spices and fried like pakoras. Manendar’s food-cart offers piping hot chops, green chutney and eggs.

Business has slowed down because of the pandemic and lockdowns.  “Nowadays, I get very few customers and it has been difficult to earn even a 100 rupees a day. I don’t earn enough money for the work I put in and running my household is getting increasingly difficult,” says Manendar, adding that “sometimes I feel like quitting this work but this is all I know. At 60 years of age, what else can I do to provide food for my family?”

Manendar does not know why his family decided to emigrate to India, going through many struggles and journeying across hundreds of kilometres to reach the Indian border. They crossed  the Ichamati river in a small boat and arrived at Bongaon, in West Bengal, from where they travelled to Kolkata.

Manendar had never been to school and no one in his family was educated. “All of us were scared. We reached Kolkata under cover. We were afraid of being found out by the police and of being recognized.” The family decided to go to an uncle in Pilibhit district of Uttar Pradesh. “We left for Pilibhit in a truck,” he says.

In a few years, his family had  successfully settled in the village. However, in the 1972 monsoon, the flooding of the Sharda river served a devastating blow to his family once again. They lost their house and fields in the floods.

Manendar has attached a trolley to his bicycle and this becomes his shop. This trolley carries the egg-trays, tamarind chutney, gram flour, gas, stove, and the chop. He says he built this trolley himself when he started the business eight years ago; his earnings were fairly good . When he fractured his ribs in an accident at work and had to stay in bed, he felt dejected. He says, “I lost everything then. All my hard work was ruined and all of my savings were spent on my treatment.” After a long time spent recuperating, he decided to resume work.

Manendar, 24, started travelling to other districts and states in search of daily wage labour. He  travelled to Nanakmatta to work in someone’s fields, “In those days I used to earn a daily wage of two and half rupees in Pilibhit, whereas in Nanakmatta I could earn five rupees. Working here had more benefits.”

While working in Nanakmatta, Manender became aware of some Bengali residents who had also migrated from Bangladesh, what was then East Pakistan. “I found that a few people from my village had settled here and I wanted to settle here too. We also didn’t want to trouble our uncle any further and soon we moved here and built our [kuccha] home. Later, I bought land around here and built a brick house,” he said.

Today, Manendar has a ration card and other identity papers to prove that he is an Indian citizen. However, he doesn’t have a birth certificate, the lack of which has caused him problems many times. He says, “I was born in [East] Pakistan. How do I bring my birth certificate from there? These documents are of no use to me since I don’t do anything that necessitates having such documents. I just stayed focused on what I have been doing.”

Manendar, who brings smiles to people’s faces with his Rs. 15 chop, says about life, “In this busy life full of hard work, where are we to find happiness? All my time is taken up with worry about employment.”

Prakash Chand is a Class 10 student of Nanakmatta Public School in Uttarakhand. After a PARI session in his school, he was keen to document people and stories around him. He says: “While working on this story with PARI Education I realised how little I knew about the people in my village. I understood that the history of a community stays alive in its anecdotes and stories. It was challenging for me to put Manendar’s story into words. Writing this story not only allowed me to learn about displaced people but also gave me the opportunity to understand their struggles and pains.”