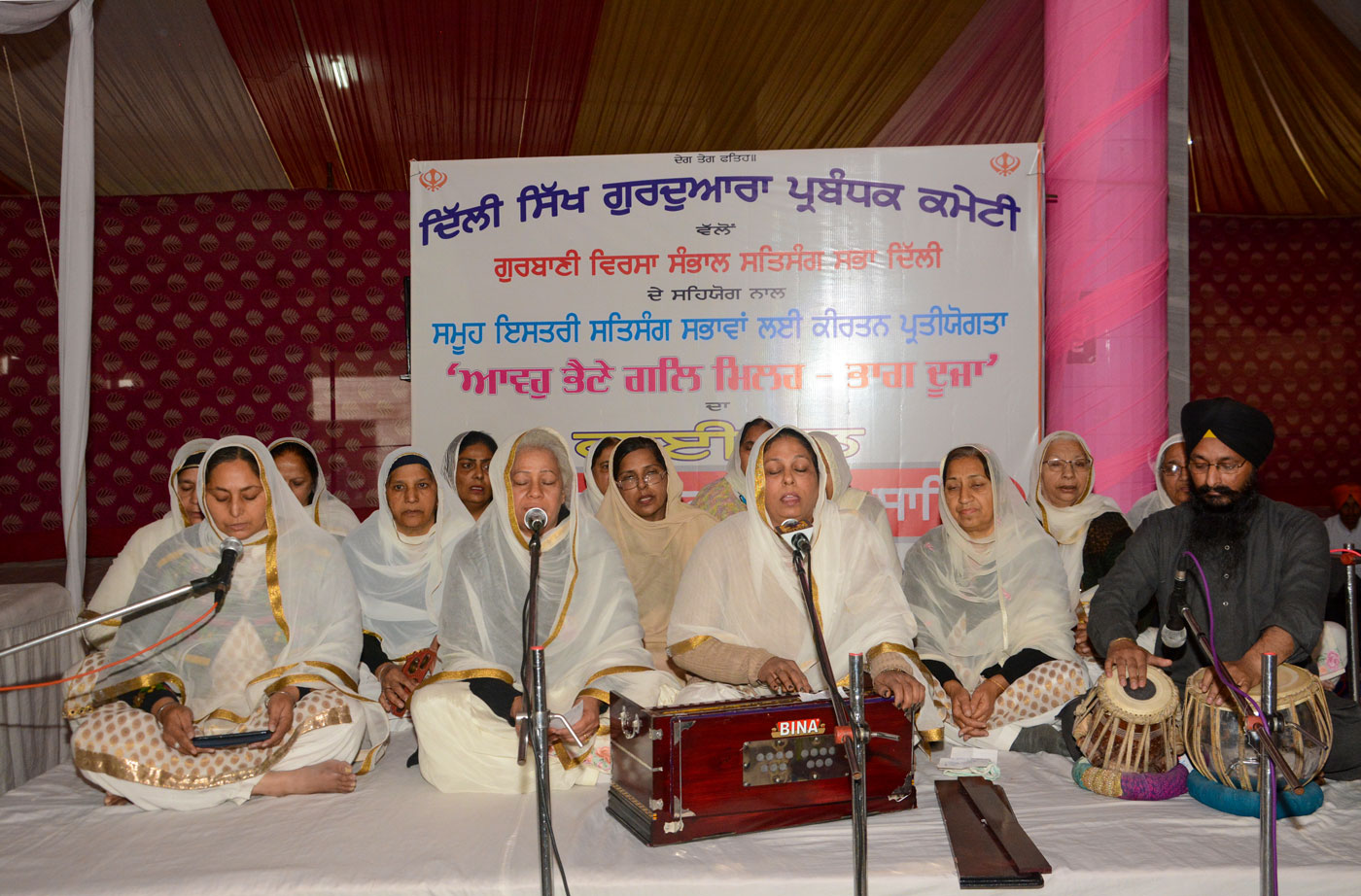 November 2, 2022
New Delhi
Gender, Things we do
Women from the Sikh community are slowly being recognised and accepted as singers in gurdwaras. This passage, however, has not been without its trials
Student reporter: Harman Khurana

“Women told me how the management would turn off the speakers in the gurdwara when they performed. Their dholki [two-headed hand drum] would be kept outside the campus,” says Narinder Kaur who has been living in Delhi for 41 years after migrating from Kahnuwan in Gurdaspur district.

The 63-year-old is a well regarded kirtaniya in New Delhi. She sings and trains Sikh women in religious music from the Guru Granth Sahib – the holy book for Sikhs. This music is referred to as shabad kirtans and is sung in and around gurdwaras.

Despite her expertise, Kaur says that like many other Sikh women, she too has struggled to be recognised for her musical skill in Sikh places of worship.

The 2022 Directory of the Delhi Sikh Gurdwara Management Committee lists the appointees who will sing, play accompanying musical instruments and recite from the holy book in the gurdwaras managed by the committee. Reflecting Narinder’s experience, no women are listed as singers among the 62 ragis and dhadis; the situation for kavis (poets) is better with eight out of 20 posts going to women.

“It will be one year next month since I was given any duties to perform in the gurdwaras in Delhi,” says Bibi Rajinder Kaur, a kavi (poet) appointed in early 2022.

The Sikh religion’s official code of conduct and conventions – Sikh Rehat Maryada – says any baptised Sikh can perform kirtan inside a gurdwara and gender is not a bar. Even the Shiromani Gurdwara Parbandhak Committee (SGPC) which is considered the highest authority managing historic gurdwaras, has signed off on including women. Their diktat runs across gurdwaras in Punjab, Haryana, Himachal Pradesh and Chandigarh.

Despite such powerful backing, many Sikhs do not agree that women should be allowed into religious practices in the gurdwara, and so women singers remain on the sidelines.

Speaking out against the gender divide, kirtankar Jaswinder Kaur asks, “Why can’t a devoted, disciplined and musically-trained woman be allowed to perform kirtan in the main hall of the Golden Temple, when they have been able to perform in the [other] gurdwaras on the same campus?” The 69-year-old is also a professor in Gurmat Sangeet at Mata Sundari College in New Delhi. She trains students in Gurmat Sangeet, a musical tradition as old as the religion itself.

Women do not sing inside the innermost sanctum of the Golden Temple – the holiest place of worship for Sikhs. Leaders have often remained silent on the issue even when SGPC had a woman, Bibi Jagir Kaur, as its president. She raised the issue in 2004-05 and has been quoted saying that she extended an invitation for women to perform kirtan. She says none of the applications she received were good enough and the matter ended there.

Her move was also opposed by the orthodox Sikh seminary Damdami Taksal, founded by Guru Gobind Singh, the tenth Sikh Guru. He was also the first Guru to lay out a formalised code of conduct for Sikhs. The Taksal believes if women are allowed to sing inside the (Golden) temple, it disrespects the tradition which has been followed since the times of the Gurus where only men have been allowed to sing.

Multiple attempts have been made in the past to change this, starting with a 1940 decision by SGPC’s to grant baptised Sikh women the right to  perform kirtan. This was reiterated in a more recent hukamnama (diktat) by Akal Takht in 1996, but the gender divide continues.

In November 2019, the Punjab Vidhan Sabha passed a resolution requesting Akal Takht (the temporal Sikh body) and SGPC to allow women to perform kirtan inside the innermost sanctum of the Golden Temple. It met a lot of resistance from members of the Assembly on grounds of religious interference by the State before it was passed.

Before getting married, Simran Kaur used to sing kirtans for an hour or more with her other female cousins at Gurdwara Guru Ravidas ji, Sohian village in Hoshiarpur district. The 27-year-old would visit the small local gurdwara, Sant Baba Meehan Singh Ji everyday. She observed ladies singing there and it was not considered unusual. Smaller gurdwaras are not affiliated to SGPC and hence the management and function is less rigid, she feels.

“In the villages, it’s mostly the women who maintain the gurdwara. The men usually leave for work in the morning. Whoever reaches the gurdwara first begins the practice,” points out Simran.

This may not be the case across all villages but things are changing as Harmanpreet Kaur’s experience shows. The 19-year-old is a young kirtankar from Patti in Tarn Taran district and she says she had not seen women perform at her local gurdwara – Bibi Rajni Ji. Her father, who reads the Guru Granth Sahib during public worship in the gurdwara, introduced her to kirtan. She now performs there on special occasions.

Left: Simran Kaur’s aunt singing kirtan with her daughter in 2006 on the occasion of Guru Ravidas’s birthday. courtesy: Jaswinder Kaur. Right: Simran’s kirtan practice came to a halt when she got married, but she is looking to resume her practice at a nearby gurudwara. Photo by Jaswinder Kaur

A 100 kilometres away in Pathankot city, Dilbagh Singh, 54, says ladies in the city perform kirtan and prayers for a few hours every Saturday at Gurdwara Guru Singh Sabha here. They also have women-led private music groups who visit festivals to perform.

Sukhdeep Kaur is a 25-year-old with a double Masters in Sikh Studies and in Religious Studies from Punjabi University, Patiala. She lives in Lasoi village in Sangrur district of Punjab and feels that blaming men for the gender hierarchy is unfair. Her argument is that it becomes harder for women to take up full time roles in a gurdwara and she feels that a woman would “rather manage her kids and the household than sing prayers.”

Narinder Kaur believes that women can manage it all. In 2012, she started Gurbani Virsa Sambhal Satsang Jatha to bring together women who could devote a few hours to the practice and were keen on performing in gurdwaras. “They manage their children and households. Their seva [service] is double that of a Singh [Sikh man],” she adds.

The divinity societies in Sikh minority colleges are training grounds for Sikh students to be trained in Gurmat Sangeet. Kajal Chawla who now goes by the name Kirpa Kaur, graduated in Economics Honours in 2018 from Guru Gobind Singh College in Delhi University (DU). While in college, the 24-year-old was an active member of Vismaad – the college divinity society. She continues to be associated with the society and says, “Our members come from all backgrounds and are groomed for kirtan, poetry and declamation competitions. College festivals prepare us and build confidence.”

“Jo zyaada riyaaz karega wo raaj karega [Whoever practises more, rules the stage],” says Bakshand Singh, 24, who played the tabla for the divinity society at SGTB Khalsa College in Delhi University. The students from here perform at gurdwaras and events all over Delhi and even go on tours to other states.

But the enthusiasm of young Sikhs is not translating into better position and recognition for them. “Even though many women perform kirtan in gurdwaras, I haven’t seen a woman appointed as a ragi or a granthi,” says Chaman Singh, 54, former member of the Delhi  Sikh Gurdwara Management Committee (DSGMC). He says women are employed in either clerical and accounting jobs or to cook meals in the langar. The salaries for kirtankars range from Rs. 9,000 to 16,000 per month.

“The power lies with the management committees of gurdwaras. When they organise a gurpurab [festival] or a samagam [a private religious event], why do they still prefer established ragis instead of encouraging young students and females to come and perform?,” asks Parampreet Kaur from Delhi.

The 32-year-old is trained in Hindustani music and has an MA in Gurmat Sangeet from Punjabi University, Patiala. Her voice, like those of other young women, is gaining ground and it appears to be only a matter of time before gurdwaras, without exception, allow women’s voices to echo through their places of worship.

From a woman, a woman is born;

without a woman, there would be no one at all.

This verse is from Mėhlā 1 of the Guru Granth Sahib, sung in Raag Asa.

Harman Khurana is a recent graduate in Social Communications Media, Sophia College for Women, Mumbai. She saw this project as a tool to explore the role of women in Sikh religious institutions.

She says: “The reporting experience gave me nuanced insight into how gender discrimination seeps into institutions which have an egalitarian foundation. I enjoyed working at the intersection of journalism and filmmaking. A solo reporter doubling up as a cameraperson, I had many heartfelt conversations with women who felt strongly about the issue. It’s their belief that I carried throughout.”