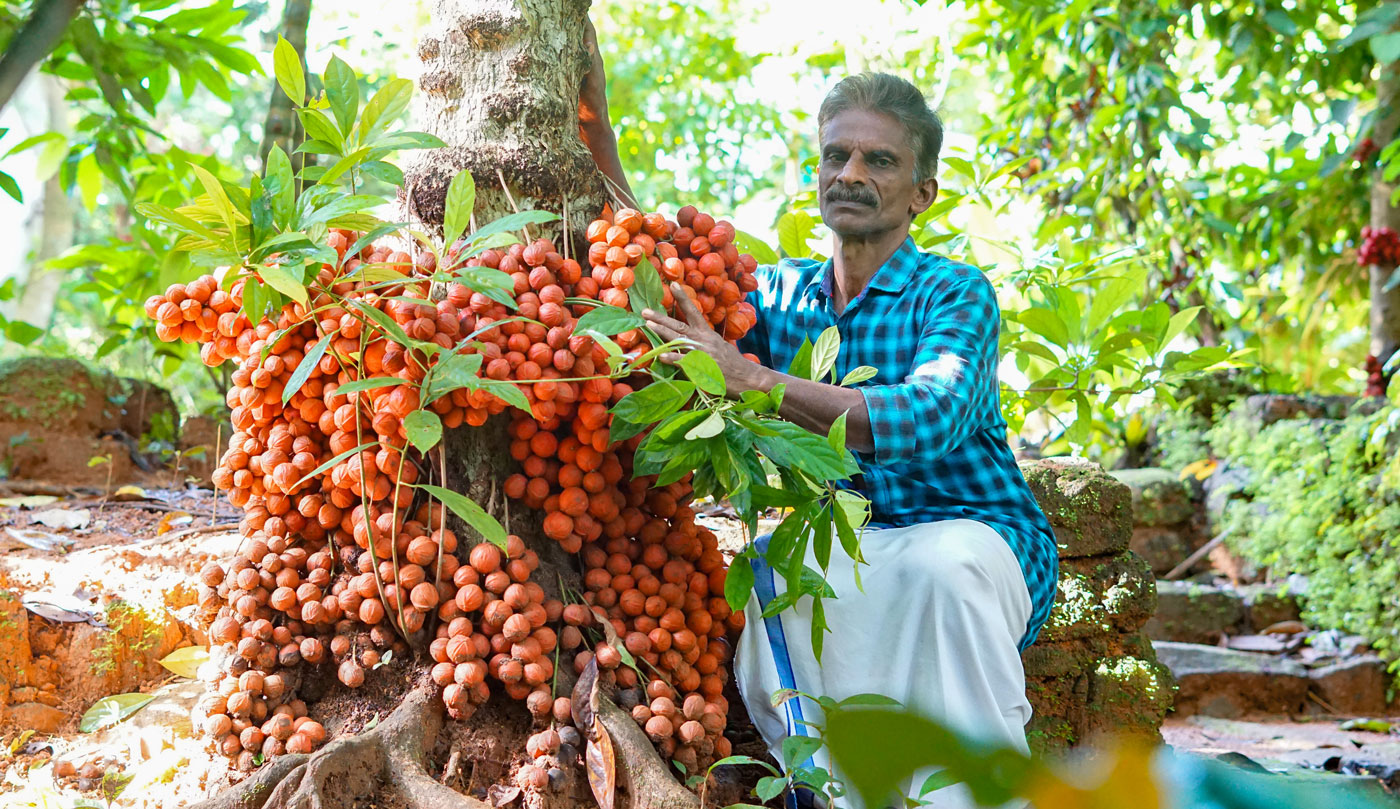 “It comes in rose, red and yellow. The rose-coloured mooti pazham is bitter, the red is sweeter and the yellow is sweet and sour,” said Baby Abraham, a farmer from Vannappuram in Kerala’s Idukki district. “The one with more bitterness and sourness has the best medicinal value. It is good for people with diabetic conditions. Adivasi communities use it for stomach and throat-related illnesses,” he adds.

The fruit’s name – mooti pazham – is derived from ‘mooti’ (below) and ‘pazham’ (fruit) and fruit appears on both trunk and branches. The bright colours attract wild animals. Baby tells us that in the forests, mooti pazham will never be left on the tree – it is eaten by bears, monkeys, elephants and even tortoises.

The 67-year-old Abraham was first gifted two saplings 36 years ago by his brother who got it from a mupan, a tribal elder in the forests of the Western Ghats. Today he has over 200 trees and saplings. The first pair was sown so close that their stumps have merged into one. Abraham recommends planting the seed two feet deep, at a  distance of five metres between saplings, for the best yield. It can be sown in any season, though the period after the monsoon is preferred. “After three to four years all of them will flower. A fully grown tree yields around 50 kilos while a smaller tree gives 15 kilos,” he told us.

In his one acre of land, Abraham has planted cash crops like rubber and indigo, fruits trees of mooti pazham, mangosteen, rambutan, lemon and Indian gooseberry, edible roots like tapioca, turmeric and arrowroot and spices like nutmeg. “My family, my wife and both my son Jerin and daughter Jentina help me with farming,” he said. “We don’t hire labourers. From making a shed for the nursery to removing rocks, it’s all done by us.”

Since mooti trees have medicinal value, Abraham prefers to use organic manure that he applies twice a year, usually in September. “We use mostly cow dung, vermicompost and kadalapinaku – a byproduct of groundnut oil. Mooti trees have to be irrigated more often once flowering starts, so during summer we water them once in three days,” he said, adding that they also put a net around the trees to protect them from bats.

At his nursery, Abraham sells a pair of saplings for 250 rupees. The mooti pazham (Latin name baccaurea courtallensis) is also known by other local names: mooti kaypan, mooti puli and merataka. Once plucked, mooti lasts for two months, although the pulp inside shrinks in volume. Locals make pickle with the pulp, wine with the outer covering and Adivasis add honey to it to make thean mooti – a sweet concoction.

“Mooti has a peculiarity. The presence of the male plant near the female plant is necessary for pollination otherwise the fruit that appears, is just an outer covering and there is no pulp inside. Pollination happens through wind and small bees,” said Abraham. In roughly four years, the male tree is covered in flowers and in no time the female tree is covered in the red fruit, cascading like a bunch of grapes. Fruits appear in late January and continue till late August.

“People [other growers] often call me telling me the fruits they get are just shells and no pulp inside. This is because there is no male tree around. I can identify from the seed whether it is going to be male or female. Once it becomes a sapling, it is hard to distinguish,” said Abraham who is often consulted by other growers.

The height of a mooti pazham tree varies. The yellow variety, found in the wild, grows to a height of 10 to 15 metres and in Abraham’s home, it reaches a height of seven metres. The tree is found in Arakkulam village in Idukki district and Pathanapuram taluk in Kollam district. “People started to notice mooti pazham after the visit of the minister for agriculture V.S Sunil Kumar in 2019,” he pointed out. The minister’s visit was followed by researchers who wanted to learn more about the fruit. Subsequently, the local media too picked up the story.

“Adivasi people sell this fruit on the roadside [in Kerala]. You won’t find it in the market,” said Abraham, who is sought out by eager customers who buy “a kilo of mooti pazham for Rs. 100 to 150 and tell him they find its flavour similar to rambutan, dragon fruit and other foreign tropical fruits.” He sends couriers of fruits to neighbouring states.

As mooti does not require a lot of sunlight and space to grow, it is suitable for people with small landholding as well as those living in towns, and Abraham hopes that more farmers will come forward to start growing the brightly coloured fruit trees.

Joe Paul CS is a final year student of Journalism and Mass Communication at the English and Foreign Languages University, Shillong. He first came across an article about mooti pazham in a regional farmer’s magazine and wanted to know more. He says, “Working with PARI Education, I realised that stories we often overlook have a great number of details and complexities in them. Pursuing this story gave me insight into many things.”