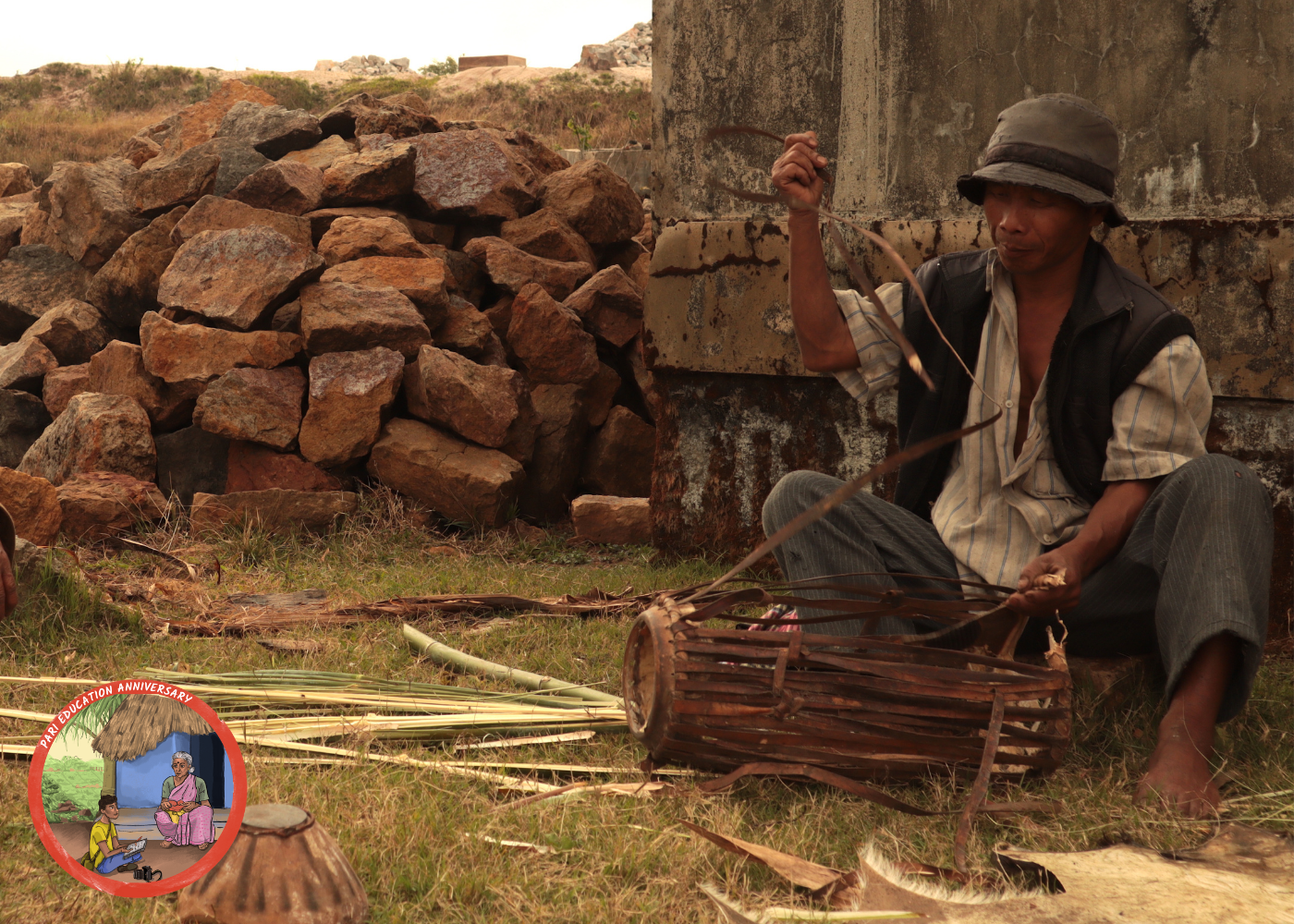 September 3, 2021
East Khasi Hills District, Meghalaya
Adivasis, Things we make
Botsing Malngiang (Bah Bot) is an artisan who makes musical instruments prized by Meghalaya’s Khasi community, but he has to rely on other jobs to supplement his livelihood
Student reporter: M.V. Srikanth

Botsing Malngiang was 14 years old when he first made a ksing kynthei – a percussion instrument used by people from the Khasi community in Meghalaya. Now, at 60, he is a master craftsman and can make one wind, one string and four types of percussion instruments using local material such as jackfruit wood, Muga silk thread and the hide of goats and cows.

Botsing is known as Bah Bot in his village Nongblai, located in Meghalaya’s Pynursla block. His mother passed away when he was eight years old; his late father was a farmer who grew oranges and made brooms. Bah Bot was the first in his family to learn the craft. He first began by observing other artisans and then tried his hand at making a percussion instrument. It took him a while to get it right, and he hasn’t stopped since then because as he tells us: “For me, it’s more like a responsibility to keep the music alive.”

Bah Bot is working on a ksing kynthei drum as he talks to us in his workplace – the open ground in front of his home. Around him are pieces of cleaned hide, his tools, blocks of jackfruit wood; strips of hide and wood shavings merge into the brown grass. “I was never taught how to play. In fact, I had hardly seen many of them except at village festivals, events, and in photos. It was out of curiosity I started to make one on my own,” he says.

Bah Bot’s youngest son Pynaplang Khongsni, 29, helps him in the craft and when he has bulk orders he hires helpers. Around three years ago, he got a large order from the state government’s Department of Arts and Culture for 200 pieces of percussion instruments. At that time he hired 11 people who worked with him for three months to complete the order.

A self-taught musician, he can play the drums he makes and performs with his group of five to six players. He says they are invited to play for about four festivals a year in nearby villages and are collectively paid around Rs. 15,000 for a performance. “Not many people can make this traditional music, so they hire us,” says Bah Bot.

E. Pyndapbor Khongjirem, a 36-year-old Tangmuri player and assistant professor of music at the Martin Luther Christian University, Shillong, says the sounds of traditional Khasi instruments imitate the sounds in a forest: “When our people were living in forests, they observed and tried to imitate the sounds in nature such as different insects, birds and so on. The instruments then evolved as society evolved.”

The Khasi, listed as scheduled tribe, have festivals through the year which call for the drums that Bah Bot crafts. At the thanksgiving festival held in April, people gather to perform the shad dance to the music of percussion instruments – ka bom, ka ksing shynrang, ka ksing kynthei and ka tangmuri – and a pair of cymbals.

In November, it’s the Shad Nongkrem – a five-day festival where the villagers offer prayers to the Goddess Ka Blei Synshar for good harvest and prosperity. The drums are beaten in rhythmic cycles called skit in Khasi, explains Bah Bot.

Among his usual clients are village committees known as Dorbar Shnong who purchase the instruments used at festivals. Bah Bot receives occasional orders from a few music colleges and the Meghalaya government’s arts and culture department. The prices range from Rs. 12,000 for a ka bom to Rs. 2,500 for a ka padiah. His customers found it difficult to reach him when he lived in Nongblai village – 4,000 steps down in a valley with no road access. So a few years ago he built a house in Wahlyngkhat village in Pynursla block in East Khasi Hills district, which is better connected. “I shuffle between these two places depending upon the work I have. If I have work in the fields, I go to Nongblai, if I have orders for instruments, I stay at Wahlyngkhat,” he explains.

Bah Bot begins by cleaning the fur on the goat and cow skin, then leaves it to soak overnight in water. Meanwhile, he shapes the wood using a special foldable knife called tari, in Khasi.

As the drum begins to take shape, he makes a circular attachment with bamboo wood that will hold the skin on the side of the drum. Using a chisel, he fixes the skin onto the sides of the drum. The last step is adding metal rings onto the long plastic threads which tie both sides of the skins together. These rings will be used for tuning the drums. He uses a gimlet (tool) to drill small holes and sandpaper to smoothen and shape a hollow in the wood.

The tangmuri – a wind instrument with seven holes – has more steps and must be done very precisely. Here he uses a heated metallic rod to make holes – there are seven holes carefully drilled with well calculated measurements. Making these instruments takes a long time – anything from two days to 15 days depending on which one is being crafted.

Demand for these instruments has been declining and in a year Bah Bot may get orders for around four to five sets. The state government has been pushing workshops and programmes to promote Khasi music through its department of arts and culture. The result is academic courses and performances at various educational institutions such as St. Anthony’s College, the Martin Luther Christian University and North-Eastern Hill University in Meghalaya.

Despite the cultural significance of his craft, Bah Bot cannot depend on it as his sole livelihood. He also gathers forest produce like betel nut, makes brooms (20 to 25 quintals a year), harvests oranges from his 3000 tree orchard and rears pigs and chickens. “I can make up to 16,000 rupees a month from all this,” says Bah Bot.

Every evening, his friends from the village and other young folk musicians visit Bah Bot after their daily work to sit and chat about music and Khasi culture. This is the time when Bah Bot sings. “He sings songs that do not have any lyrics, songs that are older than him, that remind one of the forests,” says Shibor Mawkon, a friend of Bah Bot’s and a folk musician from a neighbouring village Pynter.

“I cannot say what will happen to this craft in the future. When people converted to Christianity, they did not value this traditional music anymore. But nowadays they have begun to recognise and value their roots, and even in some churches they use [Khasi] musical instruments. So, there is some hope,” says Bah Bot as he picks up ka bom and begins to jam along with his friend.

In Khasi tradition, the ksing kynthei and ksing shynrang are never played together as they represent a mother and father and when both the instruments are played together it signifies a fight between them. So they are always played separately – when one speaks, the other listens.

M.V. Srikanth has just completed a bachelor's degree in journalism and mass communication at the English and Foreign Languages University, Shillong. He is interested in musical instruments and wanted to explore the diversity of music in rural India. As a student in Shillong, he heard about Khasi traditional music and wanted to find out more. He says: “Working with PARI Education opened a new perspective for me – looking at lives of people from different backgrounds and giving importance to the details of their everyday lives.”