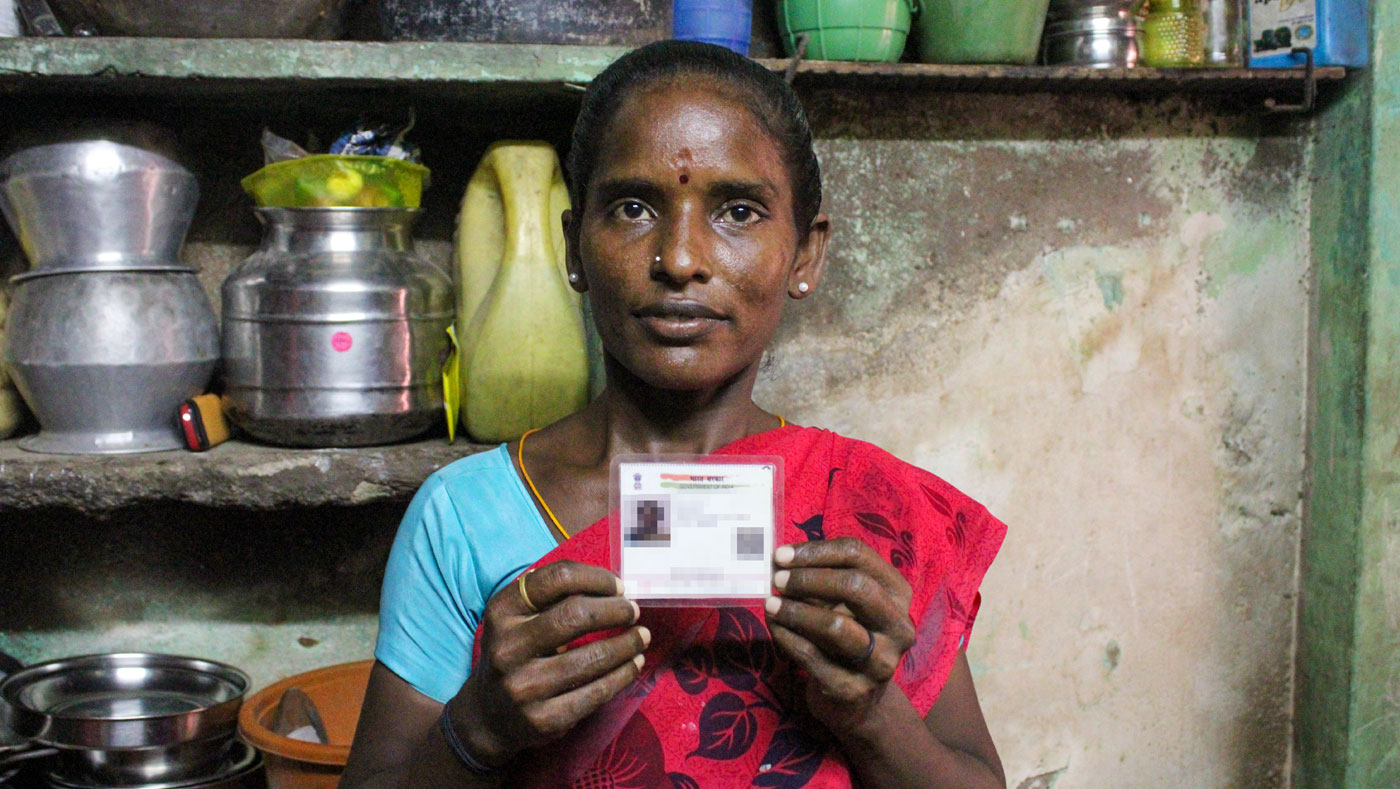 October 10, 2022
Korukkupet, Tondiarpet taluk, Chennai district
Dalits, Gender, Things we do
In Chennai district, daily wage workers, Koteeshwari and Shanmugam are unable to access either a ration card or a caste certificate despite having an Aadhaar card
Student reporter: Aadhithyaa Srihari

“The hunt to get government documents has been endless.”

Koteeshwari S. is speaking about a ration card that she says would help feed her family of five. Right now, the daily wage worker relies on the lunch her children get at school to supplement a meagre dinner that is the only meal the family can afford.

She lives with her husband, Shanmugam in Korukkupet in Tondiarpet taluk of Chennai district and their three children – Arun, 12, Lakshmi, 10 and Nethra who is a year old.

During the pandemic when schools were shut, their situation was even worse. “The hunger was terrible,” says Koteeshwari who was expecting Nethra  at this time. With no ration card, the family were not eligible for the free rations and groceries that were being distributed during the pandemic. “We had to struggle more,” she adds.

The couple received their Aadhaar card a few years ago and tried using that to get a ration card using the Aadhaar for proof of address. But she says officials at the Tondiarpet taluk office want to see a gas bill as proof of address. “We don’t have a gas connection. We only use a firewood stove. It would cost thousands to get a new gas connection. With the 100-200 rupees we get everyday, it’s not possible to afford a new connection,” Koteeshwari points out.

Meanwhile, Shanmugam M., 39, has been trying for a certificate that identifies the family as belonging to the scheduled caste (SC). He hopes that it will make their children eligible for state benefits due to SCs. “They [officials] are asking for my school leaving certificate in order to get the caste certificate,” he says. “They are asking for documents that we don’t have.”

The caste certificate will allow them to apply for a scheme that entitles them to Rs. 5,000 per child every year. This is issued under the Adi Dravidar and Tribal Welfare Department of Tamil Nadu. With this, “the government will put some money in my children’s bank account for their future,” she says.

But there is a catch: “Neither my husband nor I went to school. How will I produce this document?” asks the 35-year-old who has been working since the age of seven in a steel factory. She did other jobs after that – as a daily wage labourer on farms, at a brick kiln, on construction sites and more before settling into a job at the limestone factory.

“I couldn’t go to school. My husband also didn’t get an education. The situation we were in, that wasn’t really our fault, but it’s affecting us now,” she says.

Before the pandemic, Koteeshwari and her family tried to process the community certificate for her children using Shanmugam’s elder brother’s school transfer certificate. During the lockdown they couldn’t follow up and after that when Koteeshwari approached the Tondiarpet taluk office to inquire about it, she learnt to her dismay that the certificate had been processed but was returned since no one had come to take it.

In the meantime, the rules have changed and her husband’s brother’s papers are no longer valid for her family. Instead, she has been asked to bring her husband’s school documents to get a caste certificate.

But Koteeshwari is not giving up yet. “I just want my kids to get proper education and do well in life. I am ready to do anything for that,” she says.

The couple were married in 2009 and they worked together as daily wage labour in a limestone factory for a decade after that. When the first lockdown happened in 2020, the factory shut and they lost their daily earnings of Rs. 250-300 each. “We weren’t able to find any other jobs but we didn’t beg. We managed with the little relief material given out,” she says.

Initially, Shanmugam tried to find work loading material, but it was not regular. “I don’t get work everyday, hardly twice a week,” he says. On the days he could find work, he would manage to bring in Rs. 300-500.

Ten months after the couple lost their jobs, Koteeshwari switched to working at the JMHI market in an area called West Kavangarai in Puzhal, an area in Chennai. Also known as the Puzhal fish market, she works here dressing and cutting fish that customers purchase from the fish vendors. She says she learnt on the job.

The daily wager’s day begins at 4:30 a.m. when she gets the house going for her children – the older kids go to school and she must get their uniforms ready. The family drinks mostly tea for breakfast. Her youngest child, Nethra who is a year-old is left with neighbours or Shanmugam’s mother until Koteeshwari returns at 2 p.m.

By 6 a.m. Koteeshwari boards a public bus from the Korukkupet bus stand along with her neighbour and friend, Rajeshwari. They reach by 7 a.m. and together take a spot at the place where others like them are waiting to clean fish. Customers who have purchased fish, head towards them to have their fish purchases cleaned and cut for a small fee.

This job has not been without its challenges: “People in the fish market shoo us away and do not allow us to cut fish since we charge less than what they charge. They suddenly come and snatch our knives away. They have even taken our [two] mobile phones from us,” says Koteeshwari.

The women use special knives and a new one can cost around Rs. 100-200. That’s a day’s earning, points out Koteeshwari. Both women split their earnings of roughly Rs. 300 a day; weekends they may earn twice that amount.

“We manage to eat the day’s meal with the money we earn that day. We eat only one meal a day. We drink only tea for breakfast and lunch,” says Rajeswari. Koteeshwari is grateful that her kids get to eat lunch at the government school in Korukkupet. In what she says is a common arrangement, Koteeshwari sometimes buys the lower prices ration rice and pulses from those who are not using it. The irony is not lost on the couple who are chasing a ration card that should legitimately be theirs.

“We don’t understand the proceedings nor do we understand what they expect,” says Shanmugam, summing up the confusion and uncertainty they face.

Aadhithyaa Srihari was in his final year of undergraduate studies at the Madras Christian College, Chennai when he was interning with PARI in 2022. He wanted to profile Koteeshwari because he felt that her struggle to get basic documents in the new age of digital literacy needed to be told.