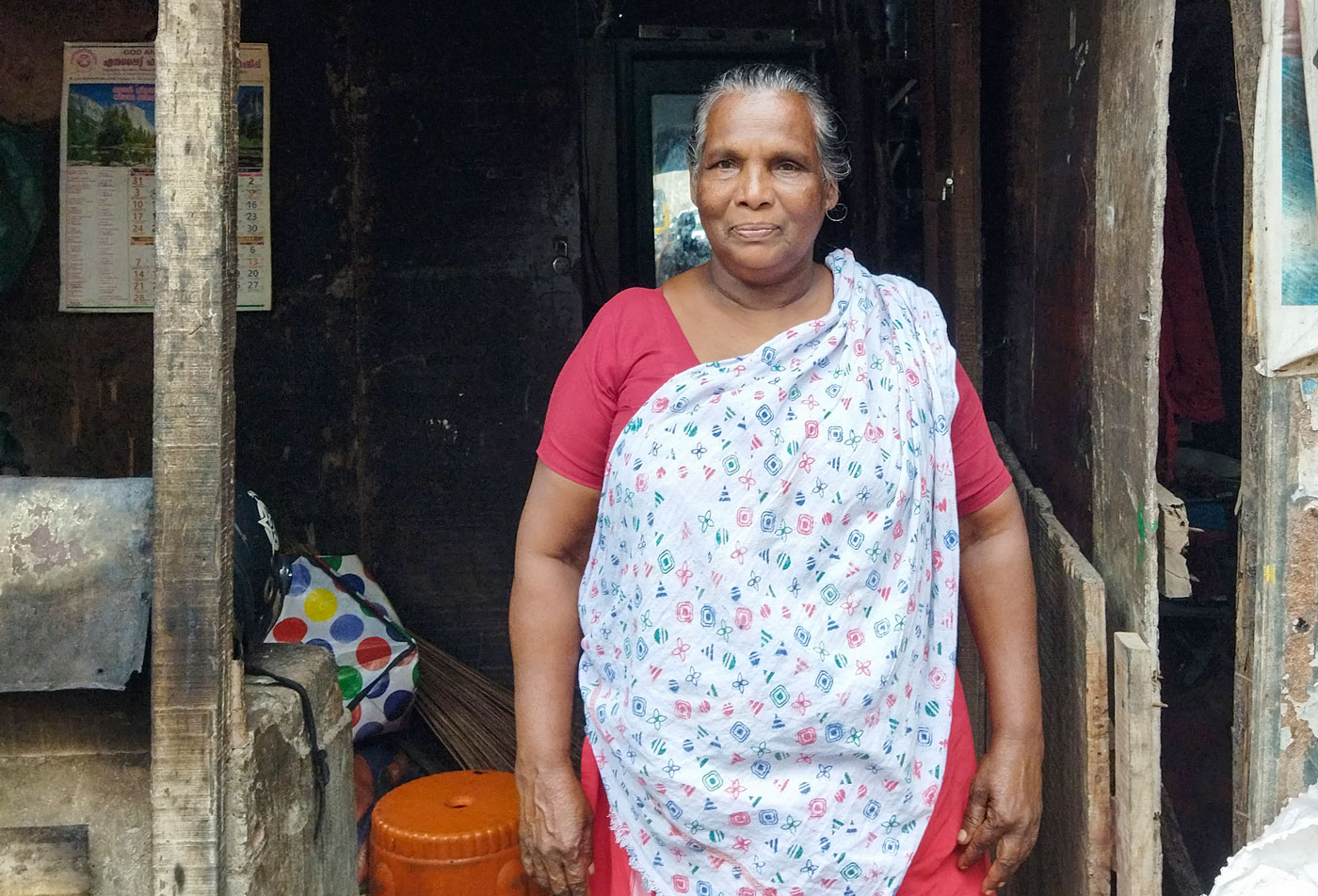 November 10, 2022
Thiruvananthapuram, Kerala
Dalits, Gender, Health, Things we do
Despite her meagre earnings as a wastepicker in Thiruvananthapuram, Saramma runs a free kitchen and keeps an open house in the slum where she lives
Student reporter: Aysha Joyce

Small, white maggots wriggle around amongst wet hairbands and ready-to-eat food packets. Saramma doesn’t hesitate and with her bare hands she picks up the waste and shoves it into a large and strong plastic bag.

As a chvaru parukkunna aal (waste picker) for over 20 years, N. Saramma routinely deals with rotten food and broken glass among other hazardous waste in Peroorkada ward in Thiruvananthapuram where she works.

She recalls numerous occasions on which she has been hurt by broken glass pieces incorrectly disposed with plastic waste. Once she had to go to a private hospital to get stitches after her hand was cut by broken glass. “The money was taken from me for the hospital expenses,” she says and points to her leg saying, “I have a rash on both my legs. It got infected and became septic and turned black. After that, I went to the hospital. I knew it was caused by the wastewater.”

With no protective gloves or masks, Saramma’s job puts her in harm’s way everyday but she doesn’t really fight it. “You’re supposed to wash the plastic waste before throwing it, but I don’t insist on that,” says Saramma as she knows households usually don’t have time to wash and dry used plastic packets.

Saramma collects waste every morning from a 105 houses. Photos by Aysha Joyce

Sixty-two-year old Saramma’s work day starts at 6:00 a.m. as she begins her daily tour of the 105 houses she covers. These houses lie across more than five housing colonies –Sree Nagar, Aishwarya Gardens, Durga Nagar, Ulyanadu and Journalist Colony in this capital city of Kerala. Each household here gives Rs. 500 a month to collect their waste directly from their homes.

Those who don’t pay are the ones who discard waste late at night. This invites the attention of stray dogs who tear through the plastic as they scavenge for food. The dogs often bite through the sacks and the sacks must be replaced frequently. In a month, Saramma uses around 10-16 sacks and the money for it goes from her earnings. “It is a struggle for me; if only they could spend 500 rupees a month [and get her to collect it],” she says.

The distance between the houses and the sorting area is roughly three kilometres and Saramma has hired an auto rickshaw for the job. Together with the driver, she shuttles multiple times between houses and the waste sorting area from where it is handed over to a private company that takes it to pig farms and recycling centres.

Waste pickers like Saramma pay these companies to collect the waste from the sorting area. By the time she has accounted for their fees, the money for sacks and the auto hire, she usually gets Rs. 5,000 to take home every month.

Saramma has lived all her life in Rajaji Nagar (also known as Chengalchoola colony), a large slum area in Thiruvananthapuram. When she was a year old, her family had moved here from another slum called Gundukaad colony, four kilometres away. They moved looking for better wage labour work. The young Saramma started working as a domestic servant when she was around seven years old in a home in Kollam, a town 66 kilometres from here.

“I didn’t know anything at that time. I used to wet my clothes in my sleep. I worked for one and half years in that house and was later taken back by my father because he felt guilty for sending me away,” Saramma recalls. However, back home she continued working in different houses and began construction labour work by the time she was 12. “It was so different back then, there was no child labour law. I looked a little older [than my age],” she says and adds that for Dalit families like hers, such hardships were common.

Saramma’s parents were unskilled labourers and she was the fourth child. Her labour was needed to supplement the family’s earnings and she was pulled out of school in Class 2 but her siblings stayed on till Class 8 and even 10.

“I can’t read or write. My signature is just three lines. With great difficulty, I can read big print characters in Malayalam. My children studied,” she says. Her children studied in the nearby government school.

Saramma has no bank account, health insurance or any of the benefits of social welfare schemes in Kerala, such as the widow pension; the health insurance given to people below the poverty line and the old age pension. According to the state’s widow pension scheme, she should receive 1,400 rupees per month but she says she has not applied for it.

“To get 1,400 rupees per month, you have to run behind government officials for many days. If I don’t work for one day, I’ll lose money,” says Saramma. Despite having an Aadhaar card, ration card and voter ID, she says she can’t find the time to finish the paperwork to open a bank account. And then if she misses a day, “the waste will rot and it will affect everybody,” she adds.

Saramma leaves home early and her first meal of the day is when she returns at 2 p.m. or later. It’s usually rice and leftover curry from the previous day. “I have only black tea in the morning. I eat when I get home after a bath,” she says. When she does grab breakfast, it’s a cup of tea and a vada from the local tea shop as she cannot properly wash her hands before she eats. While working she only drinks water.

The area she lives in used to be referred to as a place for illegal alcohol, drugs, goons and crimes. But Saramma says in the last 20 years there have been changes and the colony has become a refuge for those in need of food, a place to sleep, clothes to wear and even money.

“I have experienced a lot of hardships, with no place to sleep, no food, no clothes. I used to sleep on verandas, get up in the morning, go to marriage auditoriums and get free food from there. I have suffered a lot in life,” she says. Not wishing anyone to experience what she went through, the doors of Saramma’s house are open till 11 p.m. for people to help themselves to food. She cooks for these unknown guests who could be in need of a night’s stay or just children from the slum.

“I strictly adhere to the rule that nobody should be hungry because I faced severe poverty during my childhood. My family also practises this,” she says speaking of her daughter and daughter-in-law. The family cooks around 2.5 kilograms of rice every day and uses up a gas cylinder in 15 days.

Dhanuja Kumari S. is Saramma’s second child and is the author of Chengalchoolayile Ente Jeevitham, (My life in Chengalchoola) published in 2014. An autobiographical story, it is about Dhanuja’s experience growing up in the slum. She shares the caste discrimination her family faced, the struggle to educate her two children and the difficulties of being in a marginalised community. Although she finished Class 10 and is an established writer with a book in its third edition, she too works with her mother as a waste picker.

“Who will give a job to a Dalit?” says Saramma when asked why her daughter does the same work. “People always check who you are in relation to other people. No matter how smartly we do things, whatever we do, there is no escape. Our lives are like this only,” she adds.

I have been living by picking up waste. I’m proud of that. I think it is a good thing,” she says with pride. “But the coming generation shouldn’t be doing this,” she adds.

Aysha Joyce is pursuing an undergraduate degree at Ashoka University, Sonepat. She interned with PARI in 2022 and chose to profile Saramma.

She says, “It is Dhanuja’s life which is often reported and broadcast. I wanted to know about the person who made Dhanuja who she is - her mother, Saramma. The PARI approach helped me in asking the right questions and the ways in which to think about journalism without the lens of personal opinion hindering the narrative too much.”