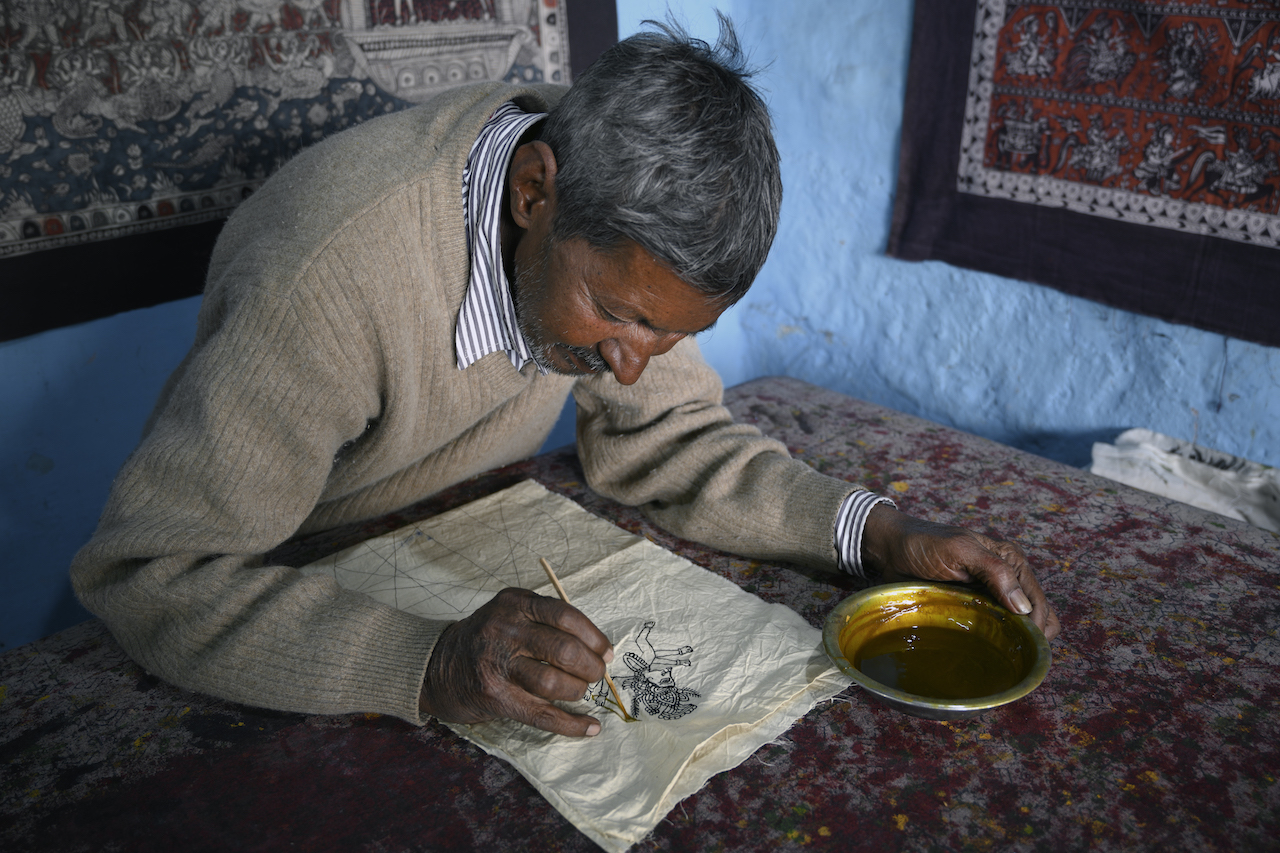 September 12, 2020
Gandhinagar, Gujarat
Photo stories, Things we do, Things we make
The Chitara family have kept this art form alive with new designs and techniques. As interest in handcrafted processes picks up, they are reverting to traditional practices
Student reporter: Devansh Sagar and Hriday Mistry

“My family has been practising this art for at least 400 years,” says Satish Bhanubhai Chitara. He is referring to the craft of Mata ni pachedi – painting with natural colours on cotton cloth. “We recently discovered a 300-year-old pachedi (painting) made by my ancestors. We keep it very safe and take it out only on special occasions like Navratri and Laxmi Puja. These paintings will remain as they are for years. If you preserve them, they will stay for generations,” he adds.

29-year-old Satish learnt the craft as a young boy from his father, Bhanubhai Chunnilal Chitara, 65, who in turn learnt it from his father the late Chunnilal Chotalal Chitara. The craft is mainly practised by men; the women in the family help out between their household chores and taking care of the children. The Chitaras can name up to six generations before Bhanubhai Chunnilal who practised the art – a tradition of making stone memorials of their ancestors, with names and the years of their births and deaths, has provided them with a complete family tree.

The Chitara family trace their roots to Viramgam taluka of Ahmedabad district. “Mughal rule, the British Raj, nothing affected our craft. My forefathers practised for many generations in this region. A drought forced us to migrate to nearby towns and so we came to Khanpur, Ahmedabad, where we have lived and practised our art for two centuries. People are attracted to our work because of this unbroken heritage,” explains Satish. His father Bhanubhai Chitara won a national award in 2012 and travelled to Delhi to receive it from the then President, the late Pranab Mukherjee.

Each type of painting has a name, e.g. Panihari is a painting with a story that could be inspired by mythological epics such as the Mahabharata and Ramayana. Images in paintings include instrument players, Hindu deities, firewood gatherers, astrologers, priests and more. Mythological stories as well as folk tales are depicted in these paintings. “In a traditional art like ours, it is important not to change too much,” responds Satish, when asked if they introduce new images to their craft. The artists don’t sketch and doodle concepts on paper, instead they imagine the figures before drawing them on cloth. The outlines are done using bamboo twigs and then natural colours, made using iron rust, jaggery, tamarind seeds, indigo or mehendi, are filled in.

The proportions and size of each painting depend on the size of the cloth. Earlier paintings were only made on large pieces of cloth. Collectors now come hunting for those ancient pachedis that are hard to find as they were usually offered to temples. This craft originated as an offering to the kul devi (resident goddess) of the Maa Setrojia temple near their home. “While the painting is being done, anyone can handle it, but once it is offered to the devi, only the high priests can touch it,” said Satish. Once a pachedi becomes too old, it is dropped into a holy river.

The craft of Mata ni pachedi underwent a few variations over the last century. The Chitara family remembers a time when the work was done using blocks – both mud and wooden blocks – to make it more affordable. Even when using blocks, the colours must be filled manually.

“The value of handwork is once more being appreciated and so these paintings are in demand again now,” says Satish. Since people are willing to pay for the effort of painting by hand, the artists have reverted to also making completely handmade products.

The other change has come in expanding from the sacred to the everyday – this art is also being done on saris, dupattas, bedsheets and other garments as the market for wall paintings is limited. When Mata ni pachedi is done on clothes and accessories, deities are replaced by nature and everyday life. These days, there is a demand for the ‘tree of life’ illustrations, explains Satish.

He sells his products at exhibitions where the saris and bedsheets, made using the more affordable block print technique, are in demand. The blocks are made in Pethapur, near Gandhinagar. He makes paintings and products on clients’ orders and keeps aside a few extra for unexpected buyers.

The Mata ni pachedi process starts when the cloth is dyed with harde powder (leaves of the terminalia species of tree). To get a natural black, iron rust and jaggery are mixed and left to ferment for 15-20 days. Then tamarind seed powder (known as kachka) is added and the mixture is boiled. The solution is kept viscous so that it does not bleed on the cloth. “The black made of iron rust causes the cloth to start crumbling after a hundred years or so; the painting becomes fragile, but the colours remain unaltered,” says Satish.

Precious metals like gold and silver were once used, but have now been discontinued. Red is made using alum, orange is kattha (catechu), green is with mehendi leaves and indigo is used for blue. After the colouring process, the cloth is washed in the local Sabarmati river to get rid of the excess colour and then boiled with the thawli flower (Anogeissus latifolia) to ‘fix’ the colours to the cloth. “No matter how many times you wash it, the colours won’t fade,” said Satish. While filling in the colours, the artist has to be careful, lest they spread and bleed into the drawing.

Bamboo twigs were preferred for drawings and outlines, but today paint brushes are also used. Earlier, brushes were made from twigs of date trees. The twigs were chewed to split them into fibres and then used as a brush.

For centuries, only cotton cloth was used, but now they have begun to work on cotton silk too. All fabric is purchased from the local markets of Ahmedabad, a textile hub. Satish told us that cotton holds colours firmly, and after washing, the pigments adhere to the cloth even better.

“I will teach my children to carry forward this craft just like their father,” says Satish. He feels he earns enough to make a decent living and support his family. His work can be seen in many temples in and around Gujarat, and he is confident that demand will never diminish. “There will still be people asking for these pachedis even after 50 years as the puja is not complete without this,” he said.

The reporters for this story are students at the National Institute of Design, Gandhinagar: Devansh Sagar is studying Photography Design and Hriday Mistry is a student of Transport and Automobile Design. This article came from a shared interest in traditional arts and crafts and a desire to spend time with the artisans, see how they use their tools, colours and their design skills. Speaking about the experience, both held that, “through PARI we started to acknowledge the life of ordinary people, people around us we tend to ignore. We became more empathetic towards them. The most fun part of the process was to go into those undiscovered niches of the same city we live in and find the real heroes of our traditional culture.”

All photos in this story are taken by Devansh.