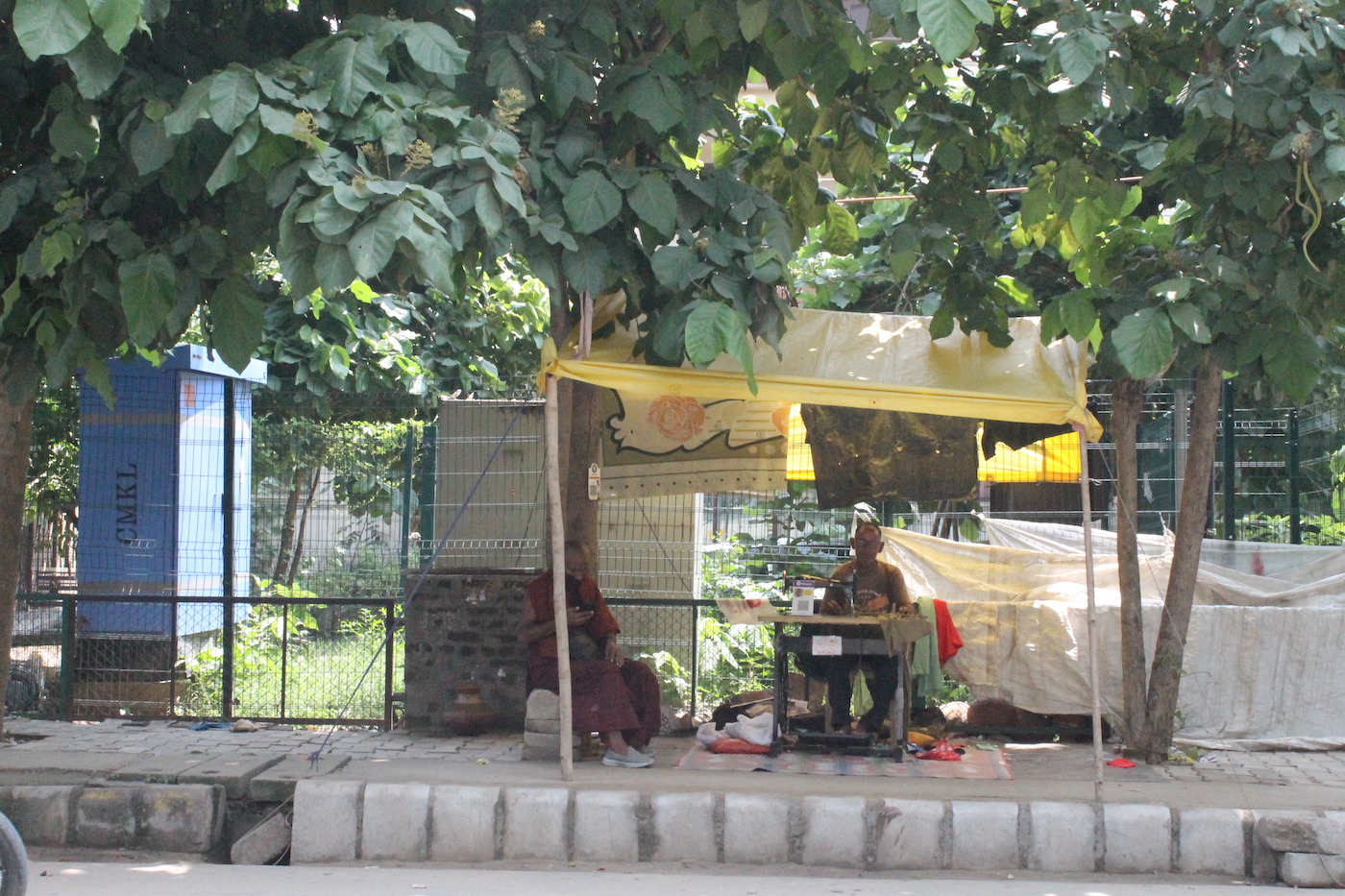 April 3, 2022
Gurugram, Haryana
Covid 19, Migrants, Things we do
The lockdowns of the last two years impacted daily wage workers like small tailors who do alteration work in city neighbourhoods. Many had to return to their villages
Student reporter: Amaaya Bhalotra

“I carry my sewing machine, table, canopy and other equipment, and bring it to this spot every day… even when it rains,” says Daulat Ram, a tailor who has set up his sewing machine under a large tree. His spot is marked by a yellow, makeshift canopy on the pavement of a busy road in Gurugram’s Sector 40, roughly a kilometre away from the main market. “There’s not much business in my village nor do I have any land, so I moved out [to the city],” explains the 50-year-old from Ramgarh tehsil of Rajasthan’s Alwar district.

Not too far from Daulat Ram is Ramesh who moved to Gurugram in 2011 from Maharajganj district, Uttar Pradesh. He can’t afford to rent a space for the going rate of Rs. 40,000 a month in the HUDA market – home to banks, eating joints and provision stores and more. Instead, this 38-year-old places his sewing table under a spreading jamun tree on the pavement. “Before Covid, I would make 500 rupees on a good day. Now, it has become much harder,” he shared. In the evening, Ramesh (this is the name he chose to share) heads home to a rented room two kilometres away and chains his sewing table to the tree to prevent a theft. Like Daulat Ram, he deposits his sewing machine and other tools in the nearby compound of a loyal customer’s house.

“I set up my table, machine, tools and clothes by 9:30 a.m. and stay here till 7:30 p.m.,” says Mohammad Ansari, 32, another migrant tailor from Purnia district of Bihar. Mohammad came to Gurugram in 2011, in search of a better life. When his work stopped during the first lockdown in March 2019, he went back to his village, Banmankhi and did farming till he returned a year and half later in August 2021.

After two years apprenticing with an experienced tailor, Kamaal bought his own sewing machine for Rs. 6,000 and found his spot under a neem tree, not far from Daulat Ram and Ramesh. He had moved to Gurugram in 2006 from Araria district in Bihar.

These four tailors – migrants from Rajasthan, Uttar Pradesh and Bihar – have set up shop, each choosing a shady spot under a tree in Gurugram, catering to a particular locality, doing alterations and repairs, and sometimes making the complete piece. Reducing the length of a pair of trousers would fetch them around Rs. 20-40, depending on the fabric; more, if it’s done by hand.

‘… On most days I sit here till 10 p.m. Customers have increased to about five a day, and so I don’t like to leave until I’ve sewn all their clothes,’ says Kamaal, who saves money every month to send to his family in the village

The lockdown had an immediate impact on their daily earnings. “I had no work here in the first lockdown. I didn’t know what to do,” said Kamaal who left for his village and returned to the city only after nine months. “Even after I came back, I barely had any customers. Now, I get ready at 8:30 a.m. and cycle to get here by 9 a.m. On most days I sit here till 10 p.m. Customers have increased to about five a day, and so I don’t like to leave until I’ve sewn all their clothes,” he added.

Kamaal has a wife and two children. His older child is five years old and is enrolled in a government preschool in his village, Duba; the younger one is two years old. He saves money every month to send to his family in the village, and visits them from time to time.

Ramesh too saw his clients reduce in number and found it difficult to make a living. He went back to his village Chainpur. When he returned to Gurugram a few months later he said, “I would come here every day in the hope of finding customers. I work from 8 a.m. to 8 p.m., taking off [only] on rainy days as there is no proper shelter for me here.” Their children – one 16 and one 13 (he did not wish to share their names) – go to a small private school in the village. During the lockdown, they had no means to attend online classes, as required by the school, and so they have stopped attending classes. He has only been working intermittently since the first lockdown, having to step back from work due to Covid and other health issues. “My wife and two children are back in the village waiting for me to send them money,” he says.

“Mai vapas gao gaya tha, yaha khane ke liye kuch nahi tha [I went back to the village as there was no food for me here]. I came back after three months,” said Daulat Ram, who returned to his village in Alwar at the first lockdown. When he returned to Gurugram, he found that his customers had reduced to less than half, although they have started to pick up again recently. Before Covid, he would easily earn about Rs. 8,000-10,000 a month. Now, he earns about Rs. 6,000-7,000. “Some days I earn 30 rupees, other days 50 rupees; yesterday, I got 200 rupees. Still… how am I supposed to make ends meet?” he asks.

Daulat Ram began stitching 35 years ago. “I came here five years ago and have been sitting here everyday,” he says, referring to his ‘spot’. He came in the hope of better income opportunities and a more stable livelihood to support himself, his wife and four children. His wife sometimes assists him in his tailoring work. His sons, aged 18 and 15, study in a local government school in Class 11 and 8. His daughters, aged 24 and 22, have completed their graduation. There is not much work for tailors in the village, says Daulat Ram. “Most customers would give clothes for alteration but would insist on paying later and say ‘it’s not like we’re going to leave the village!’ I find that going to the village has its problems and staying here too has its problems,” he said.

Amaaya Bhalotra is a second-year student of Journalism and Media Studies at O.P. Jindal Global University in Sonipat, Haryana. She interned with PARI Education in 2021 and wanted to examine the difficulties faced by the open market workers such as tailors who have no shop. "I cross these workers often all over the city and I was curious about their lives. Working with PARI, I learnt the importance of not speaking for them, instead making sure that they are heard."