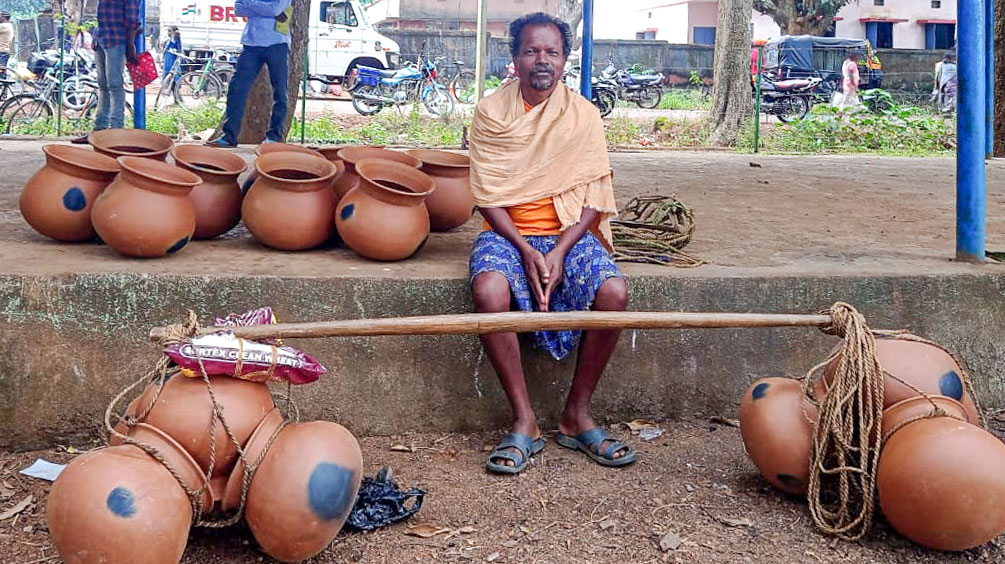 January 19, 2022
Banspal block, Kendujhar district, Odisha
Adivasis, Agriculture, Photo stories, Things we do, Things we make
This weekly market is both a source of essential provisions and entertainment for the people who live in Banspal block of central Odisha
Student reporter: Ankit Behera, Shankar Behera, Lija Behera and Pabitra Behera

This story was originally reported and written in Odia. PARI Education works with students, research scholars and educators across India who report, write and illustrate  for us in a language of their choice.

It’s ‘winner takes all’ at the bird fights in Kadakala haat.

Raju Munda has paid Rs. 500 to enter his rooster in a fight. If he wins, he will get his money back and become the owner of the other bird too. If he had bigger roosters to fight with, he would pay upto Rs. 2,000, earn that back along with a bigger bird!

Roosters are fair game at this haat in Banspal block of Kendujhar district (also spelt Keonjhar). Almost half the people in this block belong to the Bhuiya, Munda and Juang Adivasi communities. The elders here tell us that the haat has been functioning since 1960 or earlier.

Fights are usually held from October to February which is also a busy season for agriculture in the area.  The rice that is sown in July is harvested around this time, along with  moong, urad (locally known as biri) and toor (local name harad). Agricultural workers and cultivators make up almost the entire population of 1,02,527 of the district (Census 2011).

We are four students from nearby hamlets in and around village Vejidihi who have accompanied our teacher Deeptirekha Patra to document this weekly market, held every Friday from dawn to dusk. The 2021 season fights have started picking up now; They were not held for a few years for fear of police crackdowns. According to the Prevention of Cruelty to Animals Act 1960 Chapter 3, Section 11, (m), (ii),  (n), ‘…incite any animal to fight…’ is punishable with a fine ranging from Rs. 10 to Rs. 100.

No one allows us to take pictures, worried about their faces being recognised. They are also so intent on watching the sport that no one has the time to answer our questions or look at us.

Left: The competitors are getting ready. A fight is on at the Kadakal haat (middle). Photos by Pabitra Behera. Right: Two friends are preparing for the rooster fight. Photo by Ankit Behera

The Kadakala (also spelt Kodakala) haat held in Talakadakal panchayat, is only 26 kms from the famous Khandadhar waterfalls. Buyers and sellers travel up to 30 kilometers to come to this haat, from places like Nayakote and Singhpur in the same block and from Kalanda in Keonjhar Sadar block.

Vasanta Nayak, 58, has come to sell spices. She recollects what the haat was like in her childhood. “Earlier, only a few people would come to this market to buy essentials for the home ranging from handmade bamboo pots to black gram and mustard seeds. They would carry their food in tiffins as no food was available here. There were no vehicles to travel by, so people would come in large groups and would avoid walking back through the forests after [the market was done]. Instead they would stay at a relative’s house nearby and return the next morning.”

The cock and rooster fights bring a lot of people to the haat, as can be seen from the crowds around the event. A large area – designated as the ring – is cleared and cordoned off with bamboo poles.  Fights are held in this circular ground and a haat day could witness upto 30 fights. The game organisers who get the ground ready, can expect around Rs. 100-200 for their role from each fight.

People stand and watch with their weekly purchases of food, utensils, spices, vegetables, chickens, goats, meat, fish, forest produce like honey, amla, saal ka ras (sap from the bamboo tree), pots and other crafts made from bamboo. You can also get your cycle repaired and eat ice cream, savoury mixtures, samosas and other eatables.

During the lockdowns for Covid, motor vehicles were seen on the roads but cyclists were absent. This fact hurt cycle mechanic Sukuru Giri, 58 who has been repairing cycles for the last 30 years. A resident of Narasinghapur in Kendujhar Sadar, he says he can earn around  five to eight hundred on market day. “I never went to school and learnt from my uncle how to repair cycles. I also do puncture work for two-wheelers,” he said.

Dhubuli Behera, 64 , is from Kusakala is 15 kilometers away where she cultivates rain-fed rice on her acre of land for her own consumption. She has been selling  bangles for the last six years and earns Rs. 300 to 400 on an average market day. “I was selling handia [liquor made from mahua flowers] earlier. But once at the meeting of a self help group in my village I was advised to sell bangles instead. Now I earn less but I have more respect in my community,” she said. A dozen bangles sell for Rs. 30.

Rash is the local name for the sap of sal (Shorea robusta)tree and Ramani Dehuri comes walking from hamlet Sundura, five kilometres away to sell it in this market. “Earlier, there were more trees so it was easy to collect the milk of the sal tree and make rash used in puja. Now with the cutting of trees in the forest it’s difficult to get sal milk. I also bring bamboo from the forest and make bamboo pots and jars. I can earn around 700-800 rupees at the market,” she said.

When we meet Dharmu Behera, he tells us, “Eat less bread but educate your children.” Now 52 years old, he dropped out of school as his parents could not afford it, and instead learnt how to make clay pots from his father who used a potter’s wheel. He wants his children to study and take up other professions.

He travels from the village Vejidihi that is roughly five kilometres away. “I carry these pots on my shoulder. If I travel in a van, my pots will be destroyed,” he says in answer to our question.

“People used these pots a lot earlier to keep the water cold, but now the demand has gone down so I earn around 1,000 to 1,200 rupees a week,” he says. Dharmu mausa travels to 32 haats in locations such as Narasinghapur in Kendujhar Sadar block and Sudanga in Banspal block to sell his wares and remembers doing this with his father when he was a young boy.

Selling different types of spices, potatoes, onion, garlic, oil, dry fish and more is Yamini Giri, 55 from Kusakala village in Banspal block. She has been coming to the haat for the last 20 years and more. She spends upto Rs. 300 as fare for the  van she must use to come from 10 kilometres away. “My husband passed away after 10 years of marriage and I found it difficult to manage – I could not find two meals a day,” she said when referring to how she started selling at the haat.

The middle school students who reported this piece are in the learning enhancement programme of non-governmental organisation ASPIRE (a society for promotion of inclusive and relevant education) and the Thousand School Project of Tata Steel Foundation. They did this story as part of a project to learn about their surroundings.

The PARI Education Team would like to extend a heartfelt ‘thank you’ to Sudeepa Senapati, Diptirekha Patra and Smita Agarwal for their help in coordinating this piece.

Ankit says: “I often went to  this market  before to buy clothes but this time when I went with my teacher, I saw many  things which I had missed like roosters fighting. I also interacted  with the sellers and learnt about their struggles.”

Sanviti Iyer is an intern with PARI Education and worked closely with the writers of this piece. You can read her original report on How lockdowns impact a raddiwalla published in September 2021.