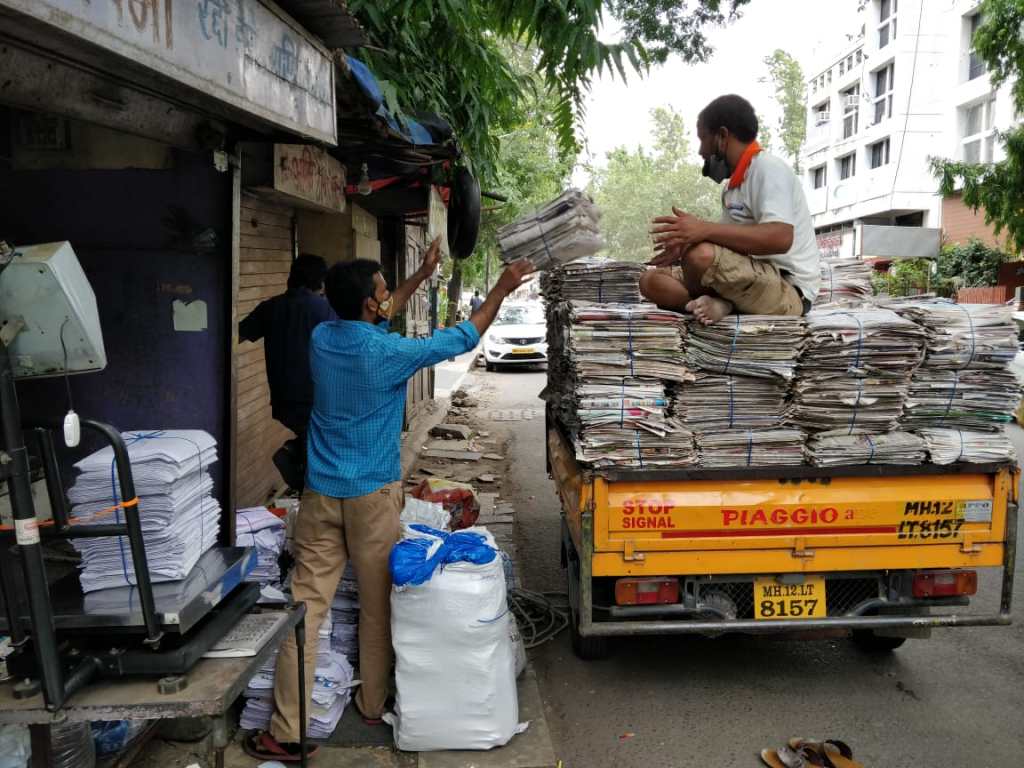 Tushar Manohar Chavan may have left school more than 25 years ago, but every May he eagerly awaits the end of the academic year.

“Around this time [May] a lot of school and college students sell their old textbooks and notebooks from the previous academic year,” says Chavan, 42, a raddiwala in Pune city. “With education having gone online [2020-21], hardly any students came this year,” he said, when I met him at the end of June 2021.

His 10 by 10 feet stall made of metal sheets on Gokhale road in central Pune is neatly stacked with newspapers and old copies of books. The thick books and the older newspapers are piled at the back and the newer ones in small bundles lie outside the shop. In a small shelf-like space below the stall is a large plastic sack with discarded plastic milk packets, next to a small bundle of magazines.

A large industrial size steel weighing scale is placed at the front of the shop where customers can easily access it. “I like to keep it [the weighing scale] in the front so that my customers can also see how much their raddi weighs. It builds trust,” he says. The scale can weigh up to 150 kilograms and is partially balanced on an old stool.

Chavan sits at the front of the stall so that he can talk to his customers. “We collect raddi – old newspapers, books and milk [plastic] packets. Currently, I give 20 rupees per kilogram for old newspapers and milk packets, and 10 rupees for a kilogram of old books,” he says. His purchase rate depends on what he can get for them when he sells them at big markets in the older parts of the city – like Market Yard and Bhawani Peth. He uses the services of a small tempo to transport the raddi to these areas once a week.

“I get five rupees per kilogram more than what I pay my customers for the raddi,” he says, when I asked him how much profit he makes.

During the first lockdown in March 2020, the daily newspapers in Pune had stopped printing as there were rumours about the virus spreading through newspapers. “People were talking about how it would affect journalists and other staff, but no one thought of how it would impact us raddiwalas,” says Chavan.

A few weeks later printed newspapers were back in circulation, but the fear of newspapers transmitting the virus still persisted. “The amount of old newspapers I get has gone down by almost 70 per cent,” he says. He can now get around 50 customers on a good day now, but the number was higher in pre-Covid times.

Two men arrive at the shop on a scooter with a moderate-sized bundle of old newspapers. Chavan takes the bundle and weighs it on the machine and calculates the dues he has to pay – Rs. 60 for three kilograms of old newspapers.

Chavan remembers growing up watching his father manage the shop and then working alongside him for the last 20-25 years. His father succumbed to Covid a few months ago. Chavan has already tested positive for coronavirus twice in the last year. “I was in a critical condition the second time; I felt very hopeless,” he said, adding, “I was lucky that I did not have to incur any charges for treatment as I was admitted in a government hospital both times.” He lives with his mother, wife, brother and a young son in a housing society nearby.

Talking about his late father, who set up this shop almost 40 years ago, is difficult for him. “My father came to this house almost 60 years ago, and I’ve spent my entire childhood in this house [where he lives now]. I studied till Class 10 before I started helping my father with the raddi business full-time,” says Chavan, speaking as he bundles up the newly acquired stack of old papers.

A few years later, while still a teenager, Chavan took up his second job – as the driver of a garbage collection truck operated by the Pune Municipal Corporation (PMC). His area for collecting waste is around the Model Colony in Shivajinagar, Pune.

His younger brother helps out managing the shop when Chavan is working at his second job. “I do garbage collection in the morning hours. I work at the raddi shop from 2 p.m. till night, sometimes until 10 p.m.,” he said.

Chavan is convinced his job with the PMC exposed him to the virus both times. “The work sometimes involves handling hazardous waste,” he says, adding that while the PMC does provide some safety gear like rubber gloves and sanitisers, “they were not adequate in quality or quantity.”

Although Chavan has recovered, he says people still eye him with caution. “They are still scared to come near me; they think I will transmit the virus. I just wish things would go back to what they were,” he says as another customer arrives with a visibly small stack of newspapers.

Sanviti Iyer is a third-year journalism student from FLAME University, Pune. She wrote this story as a part of her internship with PARI Education. She chose to ‘highlight the human cost of Covid on the news cycle beyond newsrooms’. She says: “Working with PARI Education allowed me to view the whole process through an empathetic lens. I also understood the importance of documenting different professions, and furthermore how good photographs help do this.”