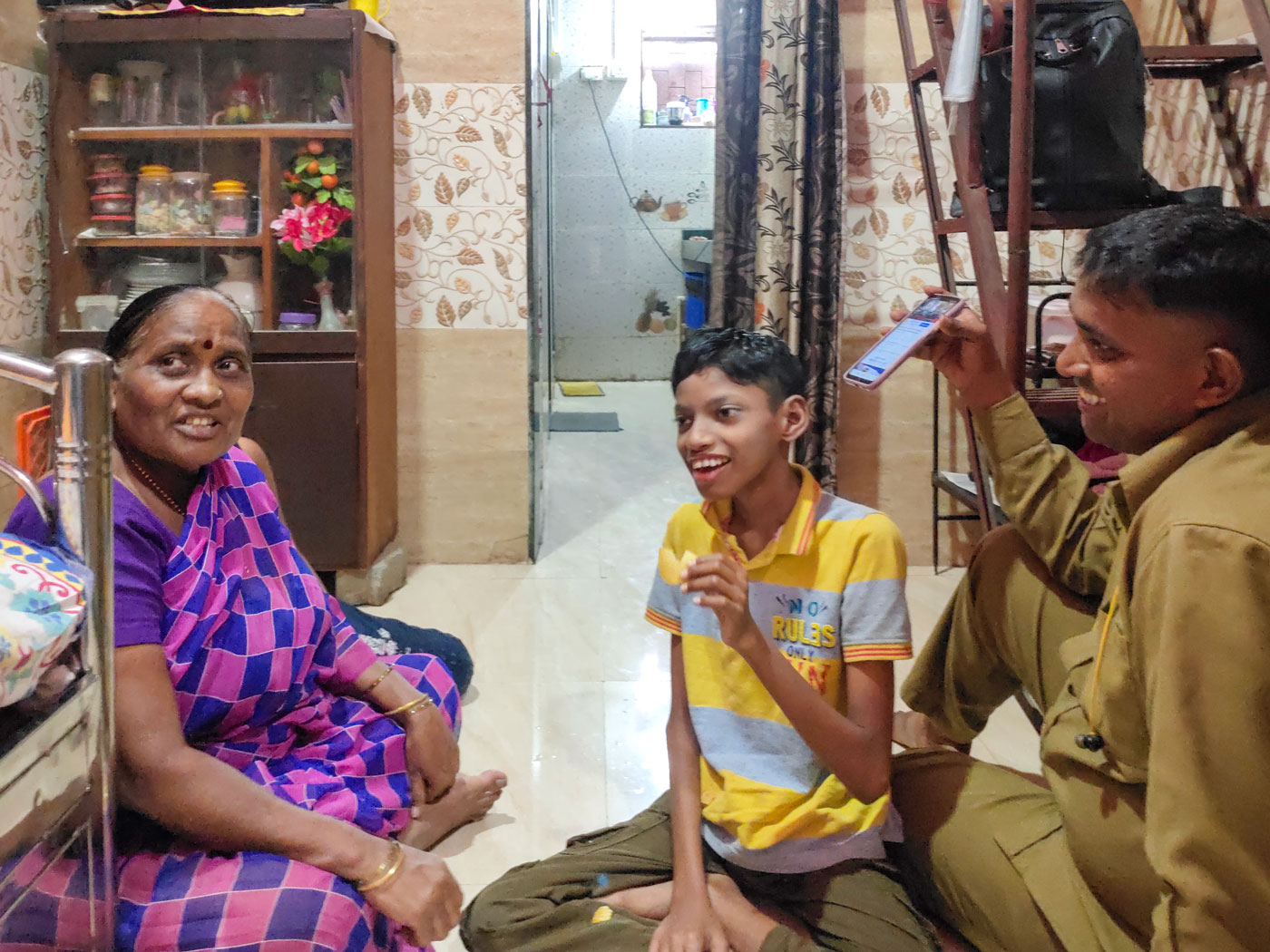 October 27, 2022
Mumbai, Maharashtra
Covid 19, Education, Health, Things we do
Multiple disabilities are a challenge for Yash Balmiki. The 12-year-old's family try their best to support and educate him
Student reporter: Siddhita Sonavane

The Balmiki residence is always buzzing with old and new Hindi film music. The family of five live in a one-room kitchen in Malvani, an area in Malad West in northern Mumbai. “I drive an autorickshaw, and when I take Yash out for a ride, we both enjoy listening to songs on the [audio] system,” says his father, Vijay Balmiki. Yash’s mother Anju works as a cook and Anju’s mother, Sunanda Ugle, is a domestic worker and lives with them.

Music of all sorts is welcomed by Yash and sometimes even produced by him. “Taali bajao [clap for me],” exclaims the 12-year-old as he bangs out beats on a stool then quickly switches to banging utensils. The near cacophony of multiple sounds doesn’t bother him, in fact it soothes and comforts the little boy who has complete blindness and a mild degree of intellectual impairment.

Yash’s favourite person is his twin sister, Khushi, who is also his playmate. When she returns from school they spend time listening and humming along to popular songs on the television. “He grasps things very quickly and likes to play a lot,” she says.

It’s 4 p.m. and as if on cue someone knocks. Yash moves towards the front door and greets his best friend, five-year old Samartha Sable. Arms linked together they head out for their afternoon walk in the neighbourhood, calling out to the puppies and cats they encounter on the way.

Sunanda steps out with them saying, “Somebody has to accompany him at all times. We cannot leave him alone.”

Anju recalls that when she gave birth to the twins, Yash was very weak. He spent four days in a neonatal intensive care unit in the hospital at Malad. A few months later his parents noticed that while Khushi comfortably identified the toy trucks and drums, “Yash’s eyes would not look towards the toys.” The worried parents were advised to do a magnetic resonance imaging (MRI) test when he turned two years old. It showed 100 percent visual impairment and mild mental retardation. “The MRI test results changed our life,” adds Vijay, showing the medical certificates and reports.

One day when he was eight years old and playing, Yash tripped on a rock and fell. Blood gushed from his head and nose; a few days later he had his first seizure. After this, he would experience 10 to 12 seizures every day. The family consulted a neurologist who diagnosed Yash as having epilepsy. “Although his seizures would last only one or two seconds, during that time he would often fall and injure himself,” says Vijay. Seizures could strike at any time, even when he was asleep.

Epilepsy is a neurological condition in which a person experiences seizures or fits. More than 1.2 crore people in India have epilepsy – almost equal to the total population of Mumbai.

The 12-year-old Yash must take 12 tablets every day. “When we bring him pills, he shuts his eyes, resisting them,” says Sunanda. But the parents have pinned their hopes on their doctor’s words: “Barobar aushadh dilyavar jaanar fits [Regular medication will stop the seizures].”

When Covid-19 hit and subsequent lockdowns followed, “There was no work [and no income]. We had to take Yash off medicines for six months during the lockdown,” explains Vijay.  With no medication, Yash’s condition worsened – the seizures would last longer and occur more frequently. He had many more falls and injuries. “Yash became even more frustrated and a little aggressive,” says Vijay about that period.

Frequent hospital visits for Yash meant taking days off at the call centre where he worked; Vijay eventually lost that job in 2020 and was unemployed for four months. In 2021, he began driving an autorickshaw which he has rented for Rs. 6,000 a month. He says he is able to earn around Rs. 600 a day driving it. “People go to office between 8 and 11 a.m. But I go to work after 3 o’clock in the afternoon. So when I start my day at work, the people who go to the office have already gone. How do I get any business?” he says.

The family’s combined earnings are often not sufficient for Yash’s monthly medical expenses, which range between Rs. 6,000-7,000. “Most of our income is spent on his medicines and medical tests. Many times, we fall short of money for his medicines,” shares Anju. She earns Rs. 10,000 a month working multiple shifts, leaving at 10 a.m. and returning by 9 p.m. Sunanda also pitches in with Rs. 5,000 that she earns from domestic work.

Yash is being treated regularly for his condition at a private hospital in Kandivali, close to their home in north Mumbai. His family has noticed improvement in his seizures and hope to do an electroencephalogram (EEG) brain scan to determine the extent of this improvement, but, “Ye sab test ke liye abhi tak paise nahi jod paye hain [We have not been able to save up for these tests yet],” says Vijay.

The family considered putting Yash into a special school after he began having seizures. When he was 9, Yash first stepped into the Santosh Institute for Mentally Challenged Children, a private institute for children with disabilities in Kandivali. The school’s monthly fees of Rs. 10,000 in 2019 were halved as the family could not afford it.

Anju said that going  to school helped Yash learn how to walk, get dressed, tie his shoe-laces and eat on his own. Yash received speech and occupational therapy at school and his parents were delighted to see him doing physical exercises and learning the language. “He was excited to go to school everyday,” says Vijay.

All that stopped in 2020 during the pandemic; Yash didn’t go to school for two years and is still not back in school. “Around 25 per cent of our students dropped out after the lockdown, mostly for financial reasons,” says Dattaram Fonde, founder of the school Yash attended.

“How could we pay his school fees? When my work picks up we will have the money,” says Vijay. The family’s situation is reflected in a report on Persons with Disabilities that shows financial difficulties as a primary cause for children with disabilities not attending school.

“Yash himself likes studying,” says Khushi, who teaches him English and Maths. She has ensured that Yash continues with his school exercises by playing videos of alphabets, numbers and objects on Vijay’s phone until he can return to school.

“It is important for him to go to school. As his family we are looking after Yash, but after us who will take care of him?” asks Anju worried that his multiple conditions have made him completely dependent on others. “A good education would help him stand on his feet,” she adds hopefully.

Siddhita Sonavane has just completed her master’s degree in English Literature from SNDT Women’s University, Mumbai. She says, “PARI, I believe, is a rewriting project -  retrieving the representation of rural India. Working on my story helped me understand the importance of plurality of voices and also appreciate the story-telling aspect of journalism. Interning at PARI opened up a whole new set of possibilities for me to participate in rejecting the notion of ‘one’ truth.”