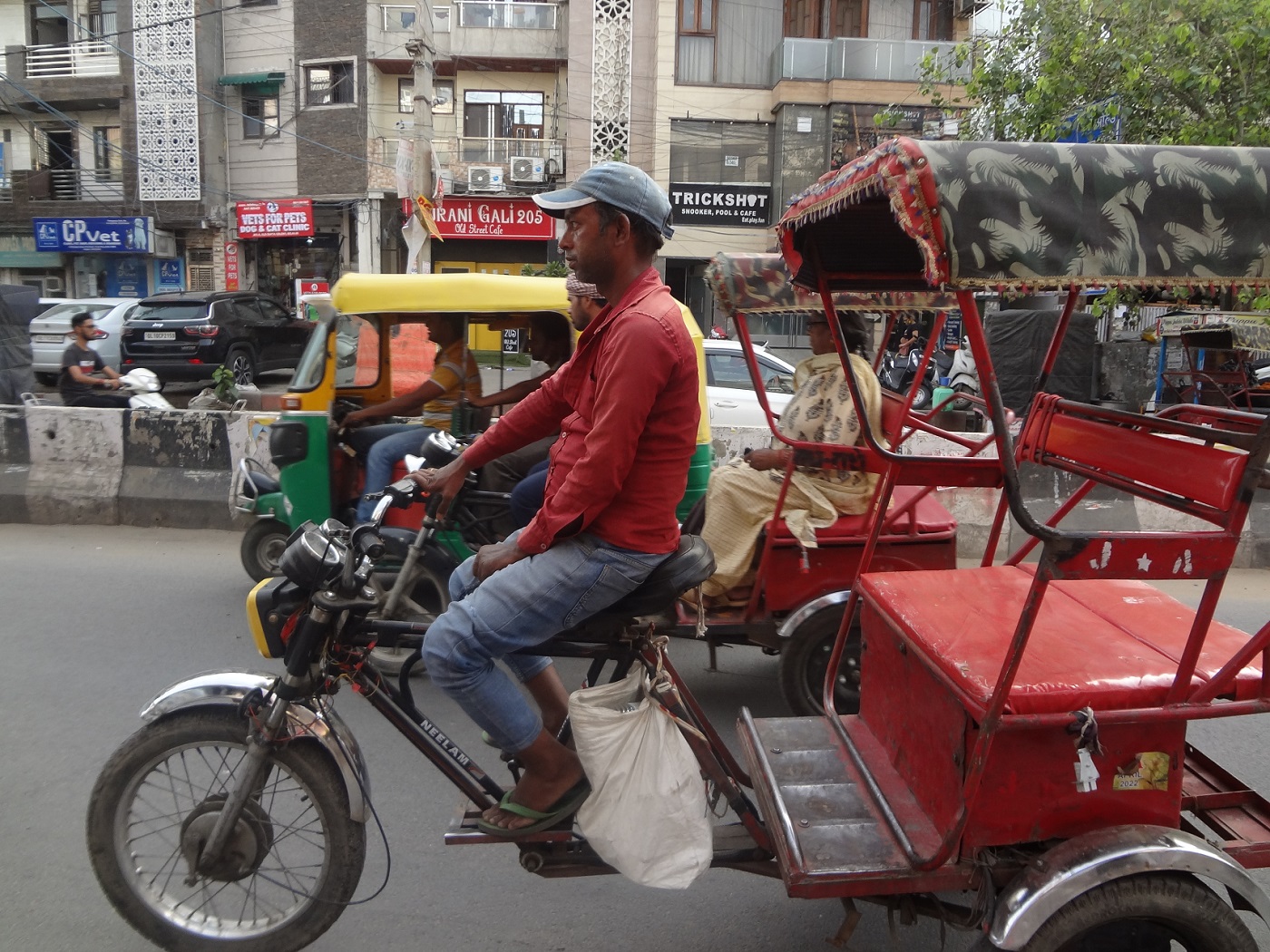 August 4, 2022
New Delhi
Migrants, Shorts, Things we do
Rinku Yadav is a young migrant from Uttar Pradesh in the capital. He drives a rickshaw here in the hope that his toddler son will have a better life back home in his village
Student reporter: Palkin Lohia

It has been more than an hour since Rinku Yadav dropped off his last savari (customer).

The afternoon temperature in New Delhi is hovering around 46 degrees Celsius. Few people are out and about, a fact that makes Yadav nervous. “On such days we barely get any customers,” he says, seated on his battery-operated rickshaw. Next to him, 10 other rickshaw drivers are lined up and waiting for passengers at a crossing in New Gupta Colony.

“In the afternoon, it is very difficult to go out and work. People also do not go out much,” says the 26-year-old worriedly. “If I stop working because of too much heat or cold, who will take care of the family?” he asks.

Yadav came to Delhi 11 years ago from Fatehpur village in Bara Banki (also spelt Barabanki) district of Uttar Pradesh. He had attended a government school there but dropped out in Class 9, after his father passed away. As the eldest child, he felt he should support his mother, Rukmini Devi, and younger sister, Jyoti. “That was a difficult time. It was necessary for me to leave my village and come to the city to work and take care of my family,” he says. Migrating to a big city with job opportunities was the only option.

So Yadav moved to Delhi at the age of 15 and began work as a delivery assistant for a grocery store, where he was paid around Rs. 1,000 a month. He switched jobs when he found work at a dairy company for a monthly salary of Rs. 1,600. He stayed there for the next six years, struggling to make ends meet: “I could not earn much money from my job. It was becoming difficult to sustain the family.”

He decided to switch professions when, as he says, “I spoke to a few rickshaw drivers and found that I could earn more driving a rickshaw.”

On a good day, he pulls in around Rs. 600; more than half of it goes towards the daily rent for his rickshaw. “There are times when I don’t make enough to pay the rent,” he says. The only relief is that because I drive a battery-operated rickshaw I don’t worry about rising petrol prices.” Any expense on the battery is taken care of by the rent he pays.

He says he would rather drive a rickshaw than do an office job. “I prefer the open air than sitting in one place in a formal job.”

Yadav’s day begins at 7 a.m. and he only returns to his room, in a basti near New Gupta Colony, by 9 p.m. Once back in his room he looks forward to phone calls with his wife, Nazmunnisa, and their one-year-old son, Anas. “We barely survived the pandemic,” he says, referring to his desperate efforts to earn during the Covid-19 lockdowns in 2020.

During the first two lockdowns in 2020, when no public transport was allowed on Delhi’s roads, Yadav stayed home in his village, in Fatehpur. Here he did small jobs such as delivering rations and farming. “We have some land behind our home where we grow radish and cabbage for sale,” he said. The earnings barely sustained them. After getting back to Delhi to earn, he returned home only in January 2022, and saw his son for the first time when the child was three months old. Bringing his family live with him in Delhi is not an option, he says. “The rents are too high.”

Not having finished school, Yadav is keen that his son should get the chance to complete his education. He wants life to be different for Anas and says that he is working away from home to save for his education.

“If things were better I wouldn’t have come here [to Delhi] in the first place,” he says.

Palkin Lohia is a final year undergraduate student of Economics and Political Science at Ramjas College, Delhi. She says, “This internship with PARI Education pushed me beyond my comfort zone. I witnessed the struggles, and different perspectives, of migrant workers that are usually never represented in mainstream media.”