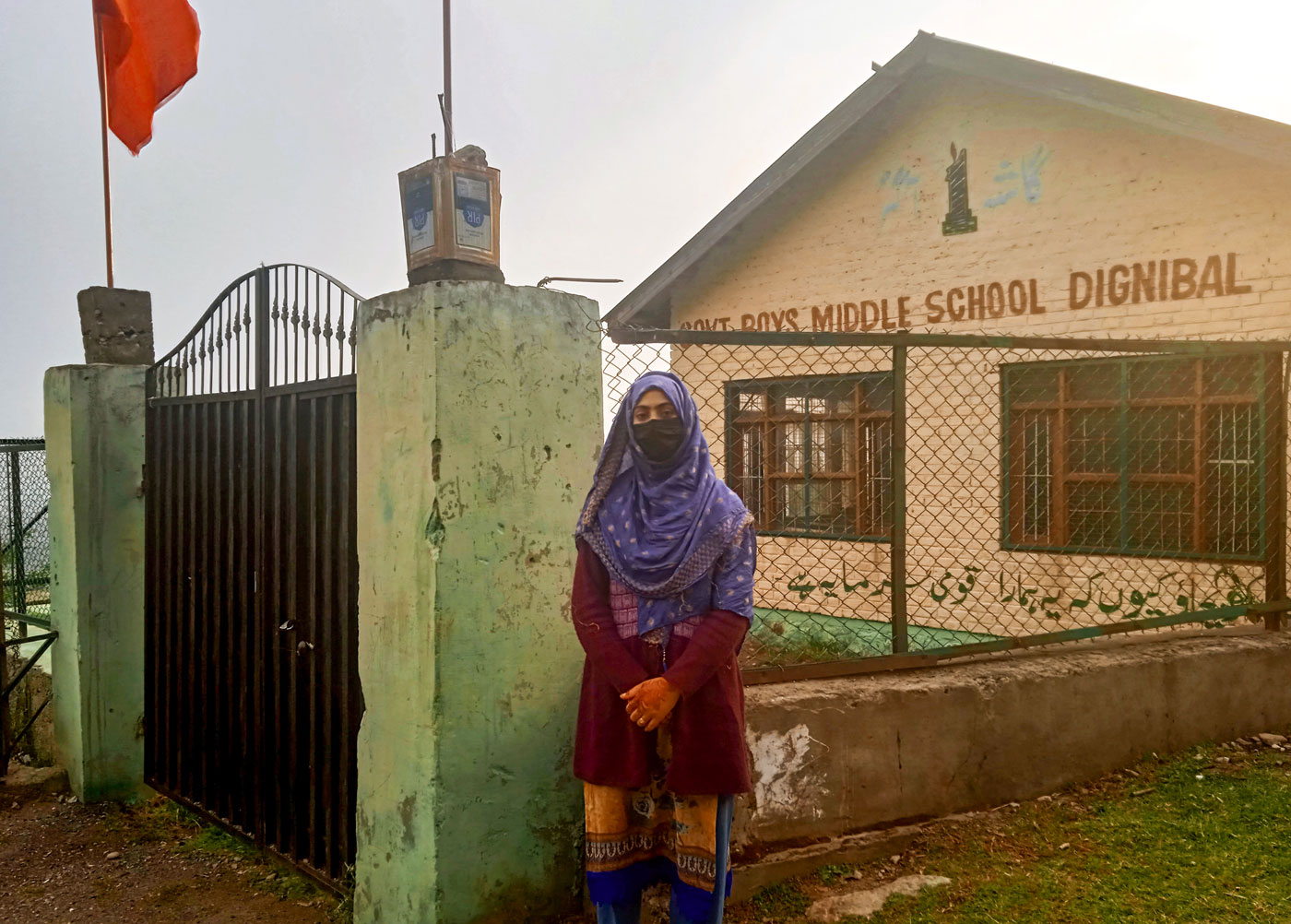 August 19, 2022
Dignibal hamlet, Warpoh village, Ganderbal block, Ganderbal District, Kashmir
Education, Gender, Things we do
Shazeya Akhtar is the first and only girl from Dignibal in Kashmir to pass her Class 10 exams, but the rest of her academic journey is in peril
Student reporter: Sabzara Ali

In September 2020, Shazeya Akhtar became the first girl in her village to pass Class 10. “I had told myself that ‘I will do it’.”

She had attended the state-run Boys High School in Shuhama. The round trip of 10 kilometres from her home in Dignibal was a steep and arduous walk. “I was often exhausted and couldn’t concentrate and study after returning from school. I would close my books,” the 19-year-old says.

Abdul Ganei Hajam, 65, and Taja Begum, 60, Shazeya’s parents, never went to school, and neither did her siblings. Her two brothers, Tariq, 30, and Mushtaq, 27, became daily wage workers like their father. “They had to earn,” she says, to help with the family’s finances.

When Shazeya’s older brothers were growing up, the closest primary school was a steep uphill climb, roughly four kilometres away. Members of the village were keen to have a school closer to their hamlet. “We put a lot of effort into [starting] this school. In 2001, we visited the Directorate [of School Education] and asked them to build us a school here,” says Tariq, who embroiders shawls for daily wages. Their efforts paid off and the Government Boys Primary School, Dignibal was established in 2002. “The next challenge was to find teachers,” he adds.

Shazeya joined kindergarten 2008 and was among the first girls to be enrolled here. The same year, the school was upgraded from primary and became the Government Boys Middle School, and offered education till Class 8. Bilal Wani was Shazeya’s teacher at the school and remembers her as a very good student.

Dignibal hamlet in Kashmir’s Ganderbal district is marked by single-storeyed tin-roofed dwellings; the winding road to the nearest city – state capital Srinagar – is mostly deserted. Shazeya lives with her family of six at the end of Malik Mohalla. Their two-bedroom home is fenced with broken tin sheets and surrounded by walnut and kikar trees.

When Shazeya finished Class 8 in her village, she left along with two other girls to join the Boys High School in Shuhama, five kilometres away; she finished Class 10 from here. She happily recalls receiving an award for being the most disciplined student.

Before leaving for school, Shazeya would wake up at 6 a.m. to clean and cook for the family. Her mother’s health is not good and so the responsibility of running the house is left to her and Hajra, her brother Tariq’s wife. “Sometimes I had to look after our cows as well. When bhabhi [sister-in-law] was away, I had to do everything. Sometimes I missed the morning assembly,” she says, recalling her high school days. On occasion, she would also have to take leave from school to take care of household work.

It helped that teachers at the high school were encouraging. “I had never seen a female teacher till Class 8, but in this school, we had many. They used to guide and counsel us,” she says. To help students who could not afford the Rs. 150 needed for school supplies and were in danger of dropping out, “our teacher used to leave our class notes with a local shopkeeper and we could make copies there,” she says.

When Shazeya was preparing for her Class 10 exams in 2019, the Covid-induced lockdown was announced and schools closed. Attending classes online was not an option as no internet service was available in her village (it came later that year). “I could not attend any class online,” she says. Determined to clear the examination, she sought out her neighbour Showkat Ahmed to help with preparation. Showkat was one of only three boys in their village who had finished school. He generously helped out – he would teach her at his home after finishing daily wage work at a construction site nearby.

“When the results came out in 2020, and I passed, my happiness knew no bounds. If I  hadn’t qualified, I would have tried again,” she says, smiling as she recalled how her parents, teachers and neighbours congratulated her – the only girl to have passed.

“We felt she had done something. We felt respected,” says Tariq.

A bridge too far

However, being the only girl to have passed came at a cost: Shazeya didn’t have anyone to accompany her for Class 11 to attend the nearest higher secondary school, roughly five kilometres away, in Khimber.

“They [her family] ordered me to discontinue my studies because the school was far and I had to go alone,” she says. In remote areas like Dignibal, accessing an education still remains a challenge. Between 2019-2020, the Ministry of Education found that 16.7 per cent of girls in Jammu and Kashmir dropped out of secondary school – the all-India figure is 15.1 per cent.

Speaking about his family’s reluctance to send their youngest member to the far-off school, Tariq explains, “It was very far and there was no transport, so we were afraid. If there was public transport, we would have had no problem.” Shazeya remembers her acute disappointment at having to drop out.

She hoped the situation was temporary and that her friends would qualify for Class 11 the next year, and they could travel together. While waiting, she learned the Kashmiri craft of sozni (embroidery) from her brother Tariq. She began doing embroidery on pashmina shawls for daily wages.

In the following year, 2021, when her friend did not qualify, Shazeya insisted she be allowed to go. “My friends don’t have any aspirations like me. They know they have to stay at home and have no other option. But I wept and asked my family to enrol me in school. I had a strong desire to study,” says Shazeya.

Manzoor Ahmed Mir, whose daughter also dropped out of school after Class 8, says Shazeya’s situation is not unusual. “I could have dropped my daughter off at the school in Khimber or Bakoora village and then left for work. But when school would be done for the day, I would still be at work and unable to pick her up. That is how she ended up at home,” he says.

In March 2021, Shazeya was finally admitted to Class 11 at the Boys Higher Secondary School in Khimber. Either her brothers or father would walk four kilometres with her to Bakoora, where she would join other girls going to the same school. They would take a bus or walk the remaining three kilometres to school from there. “We had to leave our work and go with her,” says Tariq.

Shazeya opted for Physical Education, English, Political Science and Urdu as her subjects. “I took Physical Education because I love sports,” she says. It was her first time playing sports. “The only thing that bothered me was I was the only one [from my village],” she adds.

Two months after she joined the school, the school withdrew Shazeya’s admission in May 2021. When Tariq and Abdul enquired, they were told that since Shazeya had dropped a year she was not eligible for the class. “Orders had come that those students who had dropped a year were not allowed to join regular school,” says Abdul, unsure of why this happened and what to do next.

Tariq says the men were working in the season of harud [autumn] when they were summoned by the school authorities Shazeya’s father went with her and they brought the fee [Rs. 1,500] back. “I was distressed for months after it happened,” says Shazeya. She was also given a discharge certificate recently.

The school recommended that Shazeya study at home and appear for exams as a private candidate. This required filing an application at the Jammu and Kashmir Board of School Education office in Srinagar. When this reporter checked in June 2022, the family had not gone to this office or tried for admission at any other school.

Meanwhile, Shazeya is busy learning and producing needlework, which brings in an income of roughly Rs. 1,500 a month. “If the teachers had given her regular admission she would have continued her education in Khimber. We want her to study till Class 12. We don’t want her to do a job,” says Tariq.

Despite these setbacks, Shazeya hasn’t given up on her dreams. She wants to go to art school, become a teacher and help other girls around her to complete their education. “I have many problems, but I have dreams too,” she says, aware that she must complete Class 12 to realise them.

Sabzara Ali is a Class 12 student at the Government Girls Higher Secondary School in Soura, Srinagar. She covered this story over seven months, during her internship with PARI Education.

She says: “Being an introvert, I never thought I could connect with people. The past few months have made me a better listener and made me reconsider many assumptions. For example, I thought that the main reason girls don’t pursue education is social stigma. Reporting this story, and asking for minute details, changed my perspective. It pushed me to observe small things around me, like how most government schools in my area are named ‘Boys’ School’.”