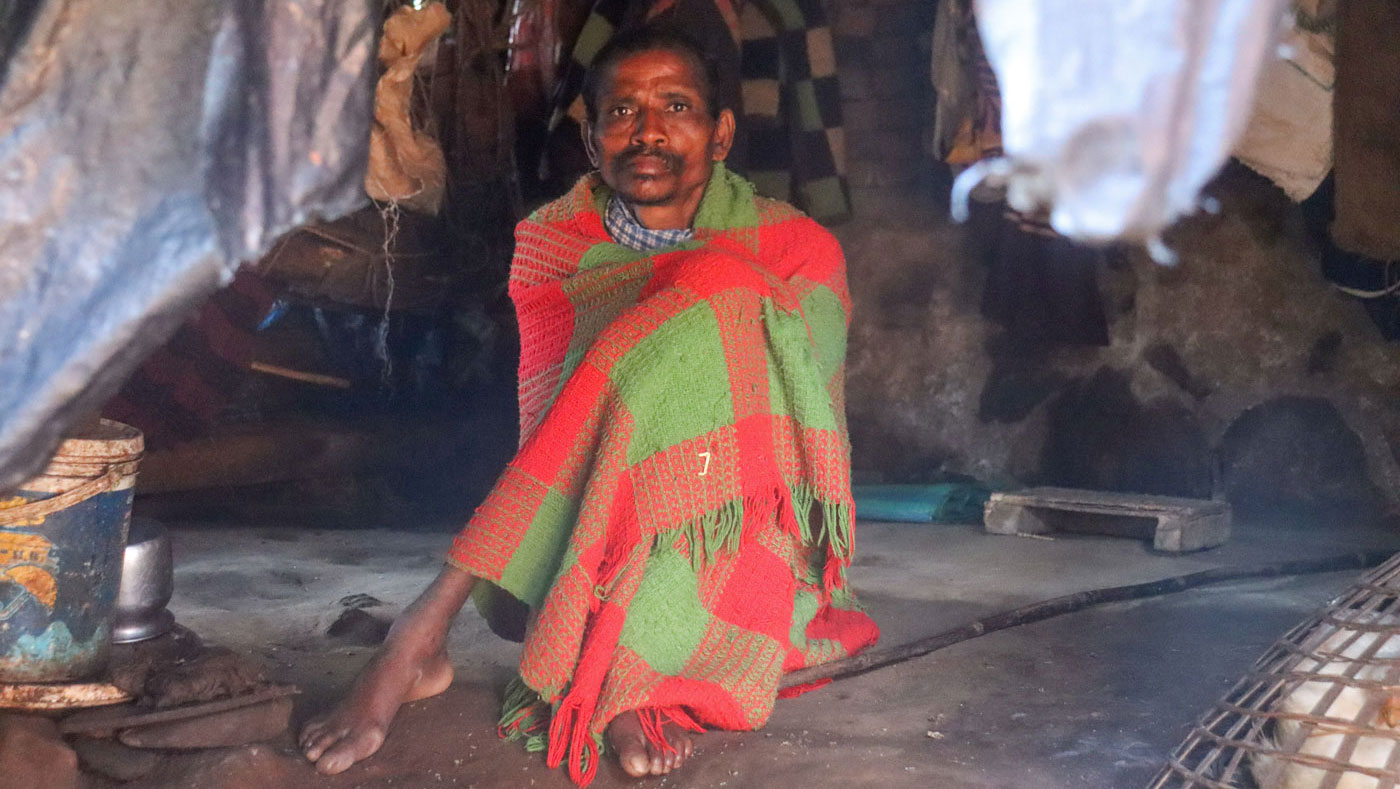 July 15, 2022
Koraput block, Koraput district, Odisha
Health
For adult siblings Sadhaba and Parbati, accessing any form of state aid for persons with disability like them, is fraught with difficulties of travel and red tape
Student reporter: Subhashree Mohapatra

Sadhaba Gouda lives in Tala Pakhandola hamlet, a distance of 16 kilometres from Koraput town. Every metre counts for his parents Goura and Jagannath Gouda who must carry Sadhaba, their disabled adult child, on their shoulders from their home to the panchayat office here; it is here they come to collect his monthly Rs. 500 disability allowance, handed out under the Odisha government’s scheme Bhima Bhoi Bhinnakshyama Samarthya Abhiyan (BBSA).

The State’s scheme loses some of its value by the time it reaches the family. “More than half of it goes into the fare for transportation there and back. The fare ranges from 300-500 rupees for a round trip from our auto stand,” explains Goura. “They [District Social Security Office] provide a wheelchair but our village has only a small stretch of pucca road and the wheelchair can’t go on the stony and muddy kutcha roads,” she adds.

The 33-year-old Sadhaba has locomotor disability and can neither stand nor walk. He uses his hands to move from one place to another and requires help with all his activities. His parents, Goura and Jagannath Gouda are his primary caregivers. “I used to get an old-age monthly pension of 500 rupees per month but it’s been stopped for the last three months. Sometimes my other sons give us 500 to 600 rupees for our daily needs,” says Goura.

Tala Pakhandola is a small hamlet attached to Padmapur gram panchayat in Koraputblock. Goura and family belong to the Gouda community, listed as Other Backward Class (OBC) in the state. The primary occupation is dairy farming, but in the last few decades, many have switched to working in mining and railway line construction. For this daily wage work, they travel to nearby areas such as Koraput and Damanjodi.

Sadhaba’s father Jagannath is seated close by but prefers to let his wife do the talking. The couple are landless folk who rely on daily wage labour at nearby brick kilns or construction sites to feed their family. “We have two bullocks and three goats. But we don’t get anything [to sell] from them. I have a ration card that gives 15 kilos of rice every month,” she added.

Loss of mobility; loss of independence

“Sadhaba used to take our cattle to the forest for gazing with his father. When he was 5 years old, he would get very bad cramps sometimes. His muscles would become stiff and he would not be able to move,” said his mother, recalling the early indications of his illness. His parents had taken him in an auto to the Koraput District Hospital, 16 km from their home. The doctor there informed them that their child would never walk again. “Henti aka heichi. Doctor kahila bhal hebar nai. Goda nahi ase [It will be like this only. The doctor said he will not get healed. His legs won’t work],” Goura added, recalling the conversation.

Sadhaba’s locomotor disability is caused by myopathy. According to Prema Kindo,  physiotherapist at the District Disability Hospital and Rehabilitation Centre in Koraput, this condition can be fatal, giving the patient 17-18 years to live after its first signs start to show. “Myopathy is a genetic disorder. The patient’s muscles stiffen and become dysfunctional. It affects their voluntary as well as involuntary movement,” she said.

History repeated itself five years later when their daughter Parbati Gouda complained of muscle pain and had a high fever. They rushed her to the government hospital at the district headquarters in Koraput and waited there to show the then six-year-old to a doctor. “My daughter was lying on a bed and we were helpless. The next morning we ran here and there to get several medical tests done,” said Goura, her voice trembling as she recalled the moment.

After a long and anxious night, the doctor finally arrived in the morning, and told them that Parbati, too, would never walk again. Sadhaba’s sister Parbati’s condition is caused by Parkinsons. “This too is a genetic disease that can be seen at birth or grows over time. It is a deformation of the central nervous system and can gradually affect the movement of a person causing muscle rigidity, fatigue, jaw stiffness and so on,” explained Kindo.

Although the union government’s Unique Disability ID project came into effect in 2016. It was only in 2021 that Goura’s family learnt about it and its benefits at a State-organised camp. The camp was hosted by the Social Security and Empowerment of Persons with Disability Department to address the issue of pending UDID cards, and also encourage participation in the project.

The Social Security Officer in Koraput, Simanchala Mohapatra, said, “Under the BBSA yojana we provide pensions. For a disability percentage of more than 70, the government provides Rs. 700 to beneficiaries. If the percentage is less than 70 per cent, then they get Rs. 500.”

“Last November [2021], the ASHA worker told me that getting a card would help my children,” remembered Goura. “From the main road, I carried Parbati on my back to the camp near the Handicap Hospital in Koraput. We waited in the queue for two hours. An officer examined Parbati and gave us this [disability] certificate,” she shared. A disability certificate, also known as PwD (person with disabilities) certificate is a document that certifies the type and extent of the holder’s disability. At the same camp, Parbati issued her UDID card. “Sadhaba refused to join us as the disability list didn’t include his name,” said Goura.

Sadhaba also has a disability certificate, showing that he has 45 per cent locomotor disability.

But there is a catch: Sadhaba’s certificate is dated 2013 and needs to be revised. According to Kindo, by age 33 a person suffering from myopathy should have a higher disability percentage of 80. “To do this [update his certificate], Sadhaba will need to go to the district headquarters on the 1st or 15th of any month to get his certificate updated,” said Lipika Batra, Block Welfare Officer. An Aadhaar card is needed for all such applications, and “Sadhaba doesn’t have a ration card nor an Aadhaar card,” points out Goura. Not for lack of trying. The family had applied for Sadhaba’s Aadhaar card five times at a Jana Seva Kendra in Koraput, carrying him there each time. Besides the physically arduous journey to Koraput, there was the expense of travel and loss of the daily wage.

“The babu [official] at Jana Seva Kendra said he can’t do anything about it. When we asked him repeatedly about the status of our [Aadhaar] application, he said that we would get it by next month. It’s been more than two months and we are still waiting for it,” said Goura. The family has stopped asking about the Aadhaar card now.

“Sadhaba has become more quiet [than earlier] and keeps to himself these days. He wants to remain in a dark room for most of the day. He stays away even from our family members, apart from me,” she shared.

Goura and Jagannath have seven children, three of whom – Ugra, Padma and Bibishen – are married and live nearby with their wives and children. They all work at brick factories and construction sites in and around Koraput and Damanjodi town.

“My eldest son, Sadhaba, daughters, Parbati and Rama, and youngest son Uday stay with me and my husband,” said Goura. The financial burden of providing medicines and other support to the disabled Sadhaba and Parbati, has strained relationships within the family. Goura worries that soon Rama and Uday will get married and leave home, ending their financial and caregiving contribution.

Both Goura and Jagannath have understood little of the medical terms for their childrens’ physical condition, but they have picked up that their children “won’t get better.” Nobody from Tala Pakhandola seems to have ever heard or seen similar ailments.

“There is no doctor [in the hamlet], no facilities. We have to run to Koraput and back. The hamlet has seen so many deaths due to this situation. We have asked the sarkari babus [government officials] who came during elections and surveys, and they say, ‘your work will be done soon’,” said the elderly Sumati Gouda who has been living in Tala Pakhandola for several decades.

Parbati now finds it difficult to speak clearly as her teeth broke after a fall. “My mother helps me with everything, but I can’t help her with anything,” she said. With Parkinson’s advancing, she had to drop out of school and she misses the social interaction with girls her age. “I don’t have any friends. All the girls from my village are now married. I am not married as I can’t walk. I can’t even speak clearly these days,” she said.

Subhashree Mohapatra is a student of Journalism at the Indian Institute of Journalism and New Media, Bengaluru. She belongs to Koraput, Odisha and wants to cover stories on human rights, social deprivation and inequality. She says: “When I first saw Goura carrying Parbati on her shoulders, I wondered what lack of governance had put Goura in so much emotional and physical strain.  While covering this story for PARI, I developed my fact checking skills and because I spent time on this piece, I was able to analyse the facts better, and learn how to narrate.”