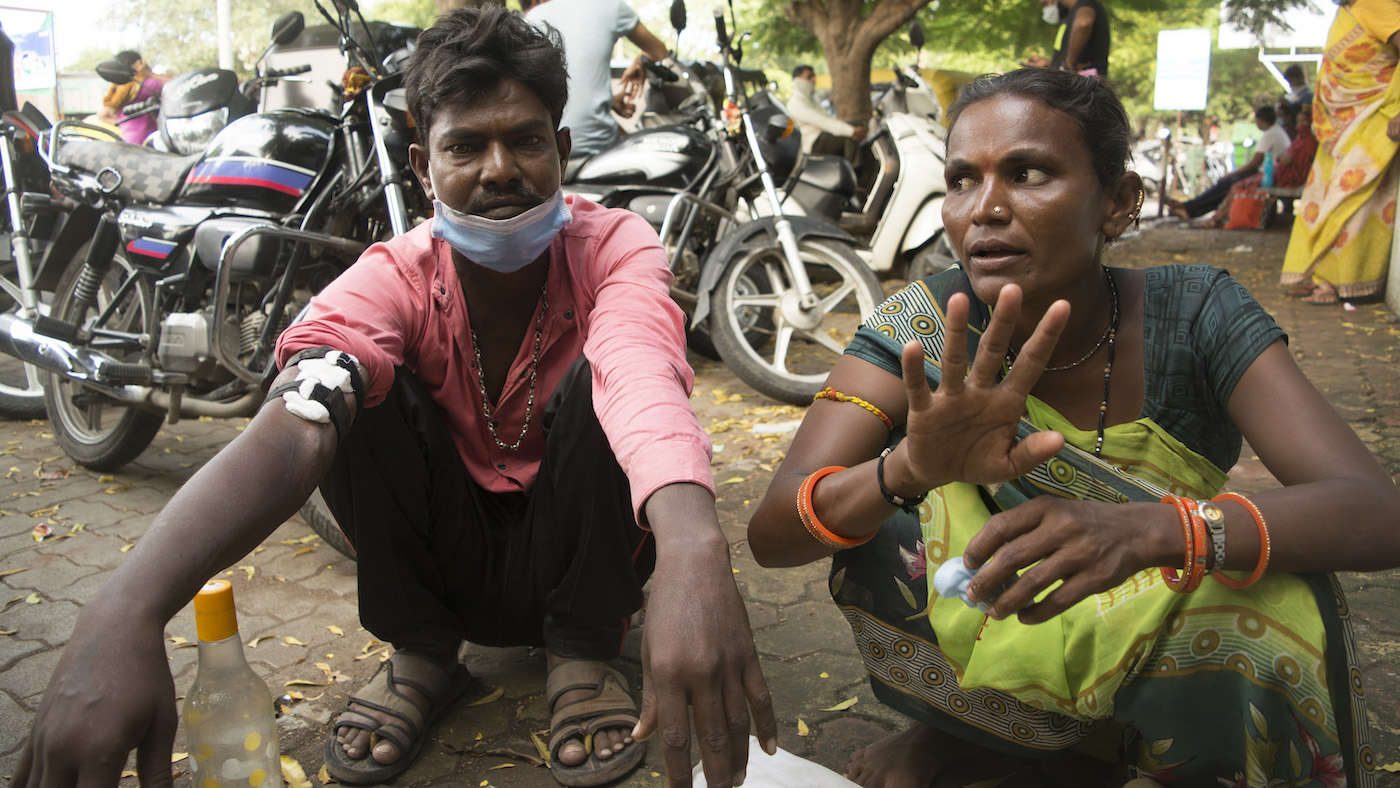 December 9, 2020
Rajkot, Gujarat
Agriculture, Health, Migrants
Manishaben and Virambhai were tenant farmers before his kidneys began failing; they are now deep in debt and their day-long trips to the hospital have left their young children home alone
Student reporter: Meet Kakadiya

He’s had 14 operations. Seven at this hospital, four at Dev hospital also in Rajkot, and three at the civil hospital in Ahmedabad.

But kidney patient 30-year-old Virambhai’s ordeal is not over yet.

The doctors here at B.T. Savani Kidney Hospital in Rajkot have informed Virambhai Adhariya that he needs a kidney transplant. Just the operation will cost Rs. 4.5 lakh. The kidney will come from his wife, Manishaben, 28. However, this solution is not without its problems.

As the only able-bodied adult in the family, Manishaben has to provide for their three children and the household. She says, “If I am operated on for a kidney, I will have to rest for at least six months. Who will look after us during that time?” she points out, adding “It is like the sky is too high and the land is too far below; we belong nowhere.”

Each time Virambhai enters a hospital, it’s an emergency and Manishaben has to rustle up Rs. 20,000-30,000 for his admission. One time, the couple had to wait a month to gather the money, and in that time Virambhai’s condition deteriorated rapidly. When they did arrive at the hospital in Rajkot – two hours from their home in Dhrol city – they were denied emergency treatment as the money they had put together would not cover the expenses for his deteriorated condition. That was when they travelled to Ahmedabad, over 200 kilometres away. At the civil hospital, they were told to wait two months as there was a long waiting list ahead of them.

They returned to Rajkot and borrowed more money. “I don’t have an account of money spent on each operation. I’m illiterate. I pay whatever and whenever they ask me to pay. I have paid by taking money from village people, our relatives, and from whoever I think can help us pay these bills,” says Manishaben, who does most of the talking as Virambhai gets tired after a few sentences. “We have files and files of hospital documents and bills at home,” she adds.

Cut to five years ago, and the scene was very different. The couple were tenant farmers on a 12-acre farm in Jamnagar district’s Keshiya village; the land in Jodiya taluk was owned by a landlord from the Bharwad community. Manishaben says: “We grew cotton and could earn 50,000 to 60,000 rupees every season.” They also grew wheat for their own consumption on the same land.

Four years ago, the failing health of Virambhai forced them to give up tenant farming and move from Keshiya to Dhrol city where they live in an oyidi (a small room, around 10 by 10 feet) gifted to them by Manishaben’s uncle.

They live here with their three children – daughter Ashmita, 10, and two sons, Amit, 8 and Rohit, 6. Virambhai is frail and weak and cannot be left on his own and so Manishaben is unable to go out and find wage work. “I’m fit. I can do wage labour and earn at least 200 rupees daily in Keshiya. But how will I work when I’m in Rajkot one day and in Dhrol the next day? Who will give me work and what work will they give me?” she says.

On the days they have to come to the hospital, their children are at home, alone. The couple leave for Dhrol at around 7 a.m. to reach Rajkot by 9 a.m. They will return only 14 hours later. The kids remain hungry until then. “We have no choice. We have to leave them like orphans as there is no one to look after them,” says Manishaben.

For the last 14 months, they have been traveling every alternate day from their home in Dhrol to the hospital in Rajkot, 50 kilometres away. “Both my kidneys don’t work anymore, so liquid gets accumulated in my body; at the hospital they draw out the waste through this arm,” explains Virambhai pointing to his right arm. He is sitting on the pavement and speaks in a soft tone, his voice weak and frail, barely audible above the noise of traffic.

The tree-lined pavement outside the B.T. Savani Kidney Hospital has many patients like Virambhai and their accompanying family members. They eat, sleep and spend the day here waiting for their regular hemodialysis treatment. “We have started looking like old people,” says Manishaben as she serves her husband his food on the footpath outside the hospital. “We are still young, but travelling for this treatment has exhausted us. We are tired now.”

To pay for medical expenses and feed their family, the couple have used up their savings of one lakh rupees, sold Manishaben’s gold earrings and borrowed from neighbours and relatives. “Initially, relatives and neighbours helped us with some money, but now they don’t. They think my husband’s health is only going to get worse and they won’t get back their money,” says Manishaben. The debt of Rs. 2 lakh, borrowed from relatives, has been used for medicines. “We don’t know how we will repay our debts,” she says.

‘Manage somehow’ involves begging on the streets and housing societies of Rajkot, while her husband waits his turn for dialysis.

Virambhai’s turn for dialysis comes around noon and ends around four to five hours later. But the couple arrive early so that Manishaben can go around asking for food. She settles in Virambhai, and then starts her walk to nearby housing societies requesting food and money. “Today I was able to get only 70 rupees, some clothes for the children and some [leftover] food. This is all that we have for the next two days,” she said. On a good day, like festivals when people are feeling more generous, she gets around Rs. 300, but most days it varies between Rs. 50-100; sometimes can be as little as Rs. 10.

“Sometimes I bring my youngest son with me, and we both go around asking for help. On seeing him, people give biscuits and packaged food. But I don’t bring him often as he gets tired walking for hours,” said Manishaben. The Jalaram restaurant located in front of the hospital, and people in nearby societies, regularly give food. “It’s enough for us and our three children at home,” she added. The Bharwad community of Keshiya village had donated a quintal (100 kilograms) of wheat which has also helped feed them.

Once the dialysis starts, Manishaben is required to be in the waiting room. She says her thumb impression is taken every time before starting the treatment, and she is aware that this is done to ensure that the hospital is not liable if anything happens to the patient. “Sometimes he needs to be admitted in the intensive care unit, and they [hospital staff] ask for a deposit of 10,000 rupees before starting the treatment,” she said.

As a kidney patient, Virambhai is entitled to Rs. 5 lakh a year under the central government’s Pradhan Mantri Jan Arogya Yojana scheme (PM-JAY) launched in September 2018. Virambhai got the card a year later – end 2019 – and he now uses this for his daily dialysis expenses which are around Rs. 650 per session, a cashless transaction. Recently, Virambhai was informed about the Gujarat state government’s Mukhyamantri Amrutum card, launched in 2012. He applied and got it a year ago. Both the PM-JAY and Amrutum schemes work in tandem and offer a cover of Rs. 5 lakh per annum and travel expenses of upto Rs. 300 per day, reimbursed at the end of the day. “Some of the costs like blood tests for a 1,000 rupees each time, are not covered under the card and we have stopped getting the travel reimbursement in the last few months. We don’t know why,” said Manishaben.

On the days they don’t visit the hospital, Manishaben stays close to her husband. With dialysis every 48 hours, his blood pressure is low and he feels dizzy and has even fallen while walking. During the first phase of the lockdown, Manishaben and Virambhai would borrow their neighbours’ motorbike to come to the hospital. “We would get it on the condition that we would fill petrol of 200-300 rupees on every trip. We had to carry all the documents with us to get past the police. It was very risky because at times he [Virambhai] would feel dizzy, ” says Manishaben.

Their children used to stay with Manisha’s parents in Keshiya village, in Jodiya taluka of Jamnagar district. They were enrolled in the village school there. But with no school during the lockdown, and dwindling work opportunities, Manisha’s mother couldn’t take care of them anymore and sent them back.

The couple get home around 9 p.m. and feed their children with whatever they have managed to gather. The parents worry about them alone without any adult supervision the whole day. Manishaben says there have been recent cases of child kidnapping in the society where they live. Sometimes, when the hospital has a high number of patients, Virambhai’s treatment gets delayed and, “we become desperate with worry for our children, alone at home.”

The couple remember a time when they were able to work and did not have to beg for food. “Five years ago when we were earning well we thought of selling this oyidi, we are glad that we did not. It is of great help to us now. We have decided, no matter what, we will not sell our oyidi, for where else will our children stay?” asks Virambhai.

Meet Kakadiya is a student of Urban Design at the Centre for Environmental Planning and Technology (CEPT) University, Ahmedabad. At home in Rajkot, he noticed Manishaben receiving food and money from some of the houses in the society he lives in. He went on to speak to her and her husband for this story. He says, “Covering this story made me realise how precarious the situation of tenant farmers is in our country. As a student of urban design, it has made me rethink about the link between the urban and the rural when it comes to the availability as well as access to the basic infrastructure facilities such as health care.”