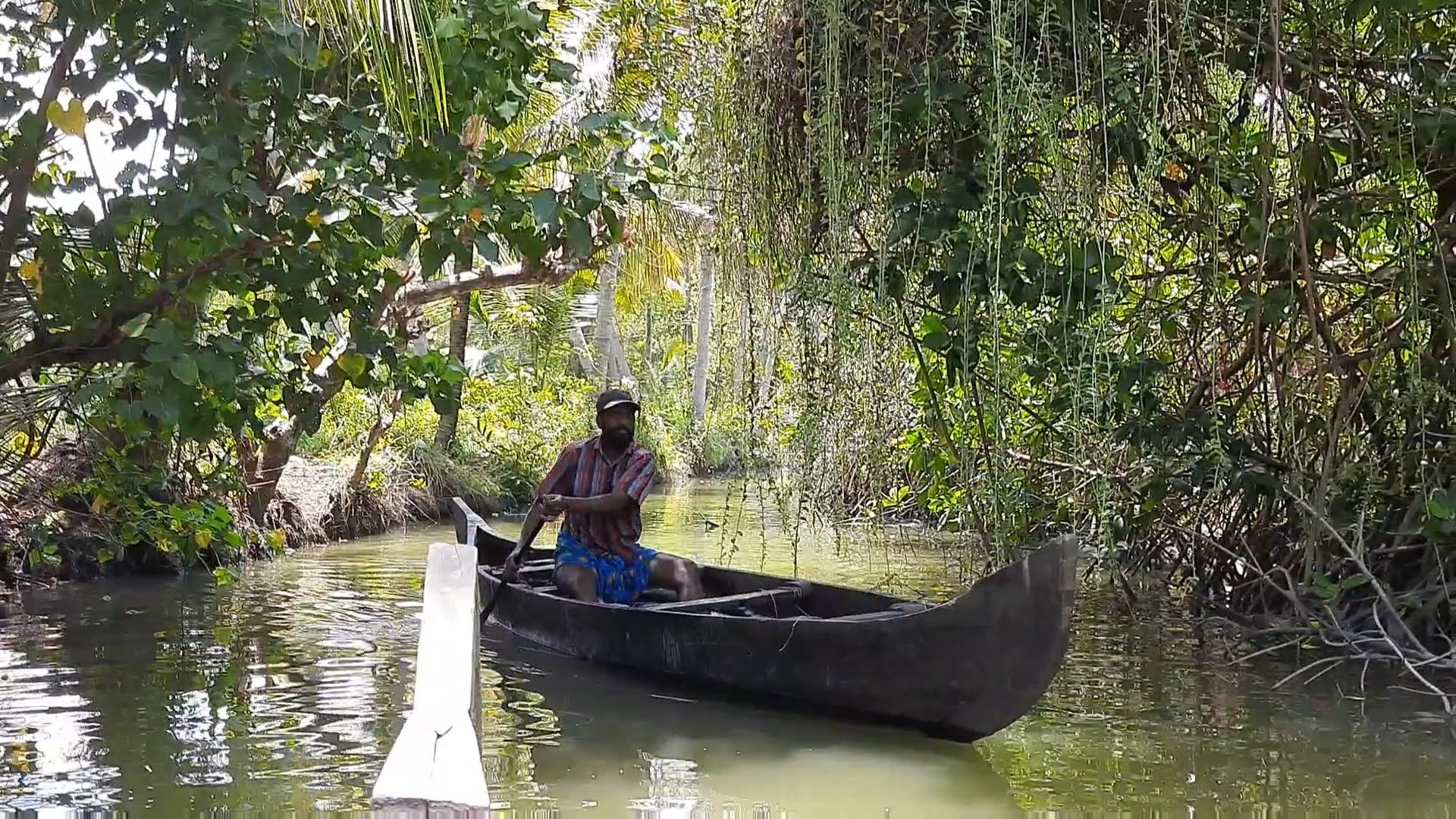 “Most of the catch is gone. We are trying to get the remaining harvest,” said Laiju Sebastian, 52, a fisherman from Kandankadavu, looking at the padashekharam (large fishing fields) around his home. Laiju has an agreement with the owner of the padashekharam: he is allowed to fish here only once the owner has collected his annual share. “They take hundreds of kilos each season, and this coronavirus has not stopped them from taking their usual share. We won’t get much,” he added worriedly.

Usually Laiju supplements his catch here by fishing in nearby lakes and puzhas (water channels of the Laccadive sea). However, the Kerala government’s lockdown that began on March 23, 2020, put paid to his plans. “I can take out my vanji (canoe). But what’s the use,” he said, referring to the government’s decision on May 1 to allow traditional boats like his to operate. He pointed to the vast waters in front of him: “There is no catch left, so I won’t get anything.”

According to the Marine Fisheries Census 2010 for Kerala, there are 1,18,937 fishing families and 55 per cent fall below the poverty line (BPL). As a relief measure for fishing families hurting from the lockdown, the State offered a one-time assistance of Rs. 2,000 as financial aid. Laiju was one amongst the many in his village who received this amount; his family continues to get subsidised PDS rations.

Laiju is a fourth generation fisherman and lives with his family of four in Kandankadavu – a small fishing village with a population of 1,444. Laiju’s wife Jeena is a domestic worker in Kochi and she commutes to work every day. Now, out of work since the lockdown, the family is struggling to make ends meet.

The fishing families of Kandankadavu – located around 35 kilometers from Ernakulam along the backwaters of the Indian Ocean – rely on the brackish waters of the padashekharam for their catch of shrimp, crab and bigger fish like sea bass and pearlspot (karimeen). “These 600 acres of land are owned by one individual and there are more such areas owned by others and watched over by guards,” said Laiju.

Laiju doesn’t work for the owners because that forces him to fish based on a business contract that prescribes the quantity of catch. “One cannot catch fish based on business requirements! You must take note of the monsoon rains, the winds and use the right-sized vessels.” He said that often towards the end of the contract, in a rush to maximise earnings, overfishing is common, and this burden falls on the fishermen working for the owners under such contracts.

Rotation farming: One paddy one fish
The padashekharam has been traditionally used for the cultivation of paddy and aquaculture on a rotation basis. Each cycle lasts four to eight months. Water is pumped from the channels to create kettus (fish farms), annually used for aquaculture from June to November. The rest of the year it is left for paddy cultivation. A variety of rice called Pokkali is sown as its stalks can be used as fish feed after the crop is harvested; additionally, smaller fish and fish matter decompose and act as fertiliser for the crop.

This practice of rotation with paddy has stopped, except in some small pockets, and it has instead become a year-round fish/shrimp business. Krishi Vigyan Kendra, Ernakulam, a research institute under Indian Council of Agricultural Research estimates that integrated paddy-shrimp fish farming fetches around Rs. 1.3 lakh per hectare and is a more profitable option than just growing paddy. The State offers subsidies and grants on seed cost and fishing equipment used in padashekharam. Fish breeders get a hefty 40 per cent discount on the price of seeds used in aquaculture.

Before the lockdown and restrictions on fishing, Laiju would also supplement his income by sailing out into the Indian Ocean in big fishing vessels that went further out and brought in bigger fish and bigger loads. Even that option is no longer available as most of his fellow crew members returned to their homes in Tamil Nadu as soon as the lockdown was announced. “Even if the ship is ready to float, we will have to first pick up our men from Tamil Nadu before going out to catch our fish,” he said.

Finding an adequate amount of fish is only part of the problem; there are challenges with storage and transportation, and demand has not picked up. According to a UNCTAD Report, Indian shrimp consignments to China have already dropped by 10-15 per cent. A visit to the National Fisheries Development Board website shows that annual fish and fish products exports are worth Rs. 45,106.89 crore, which is around 20 per cent of agricultural exports and 10 per cent of all exports in general.

“The fish we catch in the ocean is of higher quality, higher priced and most of this is exported out of the state and to China, Singapore and the Persian gulf; most of the shrimp goes there,” said Laiju. “Now the ships remain anchored in the harbour.”

Selling the catch has its own set of challenges as the old system of sales on credit to middlemen (who often also process the fish) is no longer possible because of social distancing rules mandated by the Fisheries department. “Before corona virus, I would simply take my catch to the market and have an agent to get me a fair price; we all know the price was not fair, but then he would also give us credit,” said Laiju.

The supply chain of fisheries and seafood is quite complex, especially at the local level, and the lockdown impacts every stage. The catch is auctioned at landing centres and then the onus of transporting the fish lies with the buyer.

“Lack of storage is a perennial problem. There is just not enough storage in places where the catch is landed,” said Dr. Nikita Gopal, Principal Scientist at Central Institute of Fisheries Technology.

Banning fish auctions due to fears of Covid-19, the government has instead set a price for the fish. A fixed rate for such uncertain times would have been reassuring before the lockdown, but now it benefits only those who successfully bring in an adequate catch and manage to transport it to the markets in town.

Jessy K., 47 and his wife Shibu K., 44 have a stall in the Kadavanthra Fish Market located in the centre of Kochi where they sell the catch that Jessy brings in. There are three to four other fish sellers in this market along with shops selling other meats, fresh vegetables and daily groceries. Government rules allow the fish markets to function only from 7 a.m. to 11 a.m. These strict timings were imposed after an experiment to reopen the Kozhikode central fish market resulted in overcrowding on April 3, forcing authorities to shut them down completely.

“We have lost so much money not being able to sell for weeks.We don’t have big freezers to preserve the fish, so what we don’t sell is a loss,” said Jessy, who finally managed to get a permit to sell. He also had to get a permit from the police to transport the fish to the market, 12 kilometres away. Their son is an autorickshaw driver and so they have managed to transport the catch.

Prices have almost doubled as the quantity of catch has fallen, causing prices to rise, and sellers like Jessy and Shibu must pass the higher prices on to their buyers. “Not many people will buy at higher prices,” said Shibu, looking around for customers, eager to sell the modest catch before closing time at noon. “This lockdown is sinking us daily; we just hold on every day hoping not to drown,” she said.

‘We eat fish with every meal’
Women like Shibu form the bulk of workers in fishing-allied activities. According to the Kerala Marine Census 2010, the percentage of women in peeling is 96 per cent, in curing and processing it is 84 per cent and and in marketing, 79 per cent. Unable to access fish, women workers and sellers like Shibu have been hit hard. She pointed out how fake news about coronavirus spreading through fish was adding to their woes, saying, “We eat fish with every meal and nothing has happened to anyone around. But people are saying it came from a market in China, so it can come from a market here.”

These chaala [sardines] were caught by fishermen in vanjis and were never as expensive as they are now. Only vanjis can enter the waters now, big boats cannot. The vanjis do not get a lot of fish, but it is fresh

Dr. Gopal of the Central Institute of Fisheries Technology said things will get worse as the monsoon ban on fishing started on June 9 and will continue for the next 52 days. “A majority of fish and seafood comes from big fishing harbours, such as Vypin, Fort Kochi and Munambam. But most of them are shut now.”

Laiju has three sons and only the youngest takes an active interest in fishing, but will soon follow his eldest brother and train to become a fireman; the second son works in an office in Kochi.

“Our lives revolve around our village, and this is the only life I know,” said Laiju. Even when the floods came, we knew how to manage ourselves. But navigating through this Corona is unfamiliar. You know a Malayali can’t do without fish, so I am still hopeful,” he said.

Vedika Pillai is pursuing a bachelor’s in Sociology at the Lady Shri Ram College for Women, Delhi University. As part of a prescribed course – Ethnographic Filmmaking Techniques – she made a film on the fishing community that led to this piece for PARI Education. Vedika says, “the fishing communities have been affected by movement and migration of capital, shifts in policies and social norms. This reveals the larger social structure they are steeped in. Covering this story for PARI has grounded my sociological imagination in something deeper. It has urged me to rethink the idea of our daily lives and fit lived experiences into a larger social fabric.”