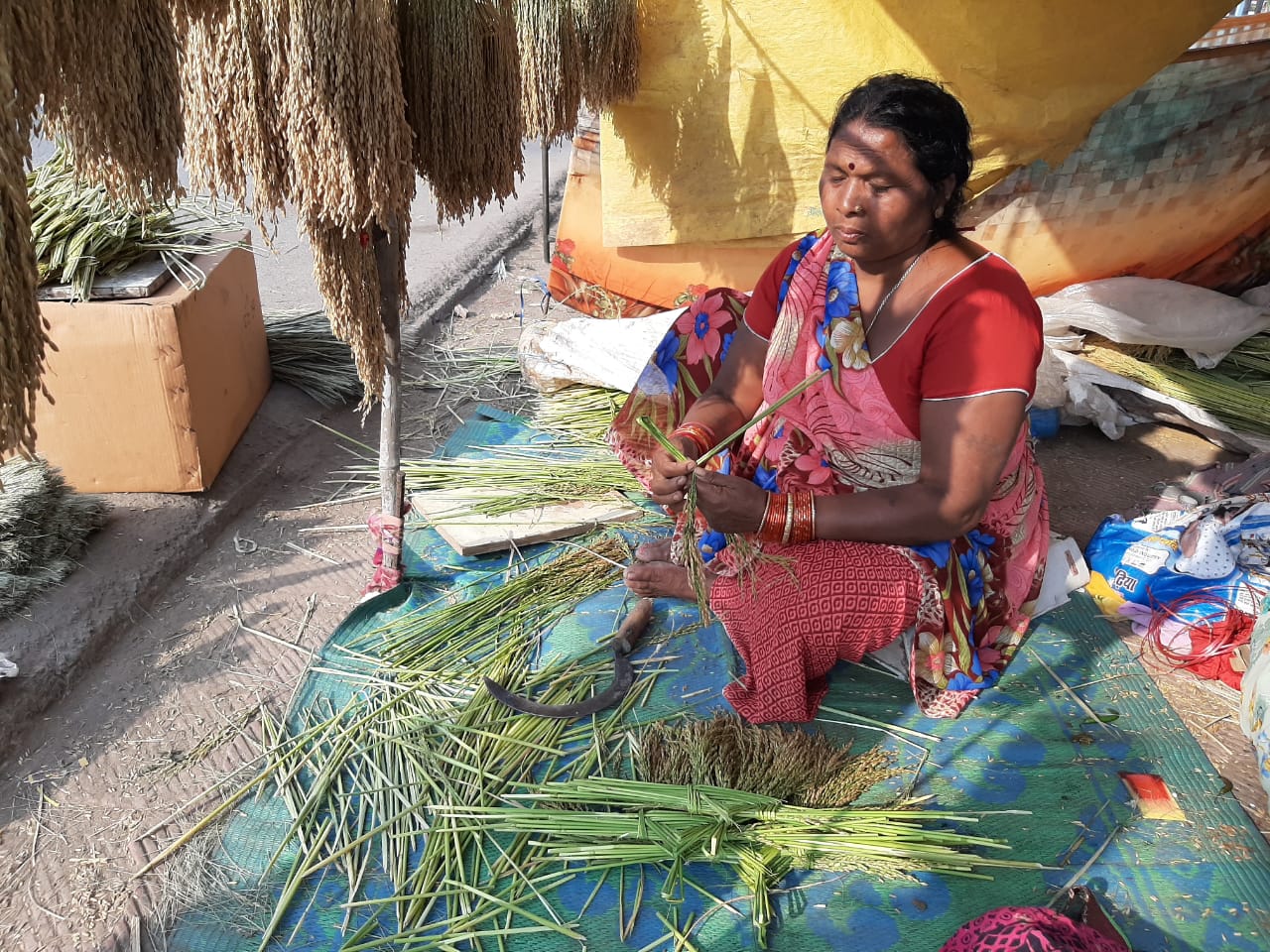 In Chhattisgarh, the harvesting of paddy coincides with the festival of Diwali, and dhaan jhoomer of varying designs are hung at the entrance of homes after Laxmi puja for birds to feed on the new grains. These hanging decorations made with the drying stalks of paddy, speak of the connection between the harvest, the festival and the feeding of birds in this state.

Rice is widely grown in Chhattisgarh – on 3.76 million hectares of land in – a tenth of the national area under rice, says this government report for 2018. A majority of the working population in Kumari Pardhi’s village, Budeni, are involved in agricultural work and farmers like her and members of her family, weave these decorative two and three dimensional pieces to earn an additional income. “Those who don’t own farmland buy it from the market,” says Kumari Pardhi. Her family owns around six acres of land in Magarlod block of Dhamtari district on which they grow rice and other crops. “I have two sons. The younger one is studying and helping us on the farm as well,” she adds.

Another jhoomer maker is Kumari Sonwari who has travelled almost 50 kilometres east from her village in the same district to come here [to capital city Raipur] to sell the dhaan jhoomer. “By selling these, we can earn up to 3-4,000 rupees every year,” says Kumari Sonwari. Last year Kumari Sonwari was unable to sell much due to the pandemic. “The world stopped earning, and so did we,” she said.

Kumari Sonwani is from Maroud village in Kurud (Chormudiya) block. Her village in Dhamtari district is largely made up of farmers and agricultural workers. “Dhaan jhoomer is a part of Diwali celebrations here [in Chhattisgarh],” she said.

In Purani Basti, an open market in Raipur, Milwantin Pardhi, also from Budeni, is selling dhaan jhoomer. She began making these a month ago, and now has brought them to the city to sell. “We get better profits in the city, so we pay to come here to sell,” she says as she continues to weave together the stalks of dried paddy to make another one.

Prajjwal Thakur is a Class 11 student of Delhi Public School in Bhilai. His previous story on PARI, Behind the wheel, at a crossroads, was published on June 18, 2021. He wanted to do this story on dhaan jhoomer. He says, “Reporting this piece made me more conscious about the role of farmers in festivals and the importance of paddy in Chhattisgarh and neighbouring states. Working with PARI Education I got a new perspective of the society in which I live.”