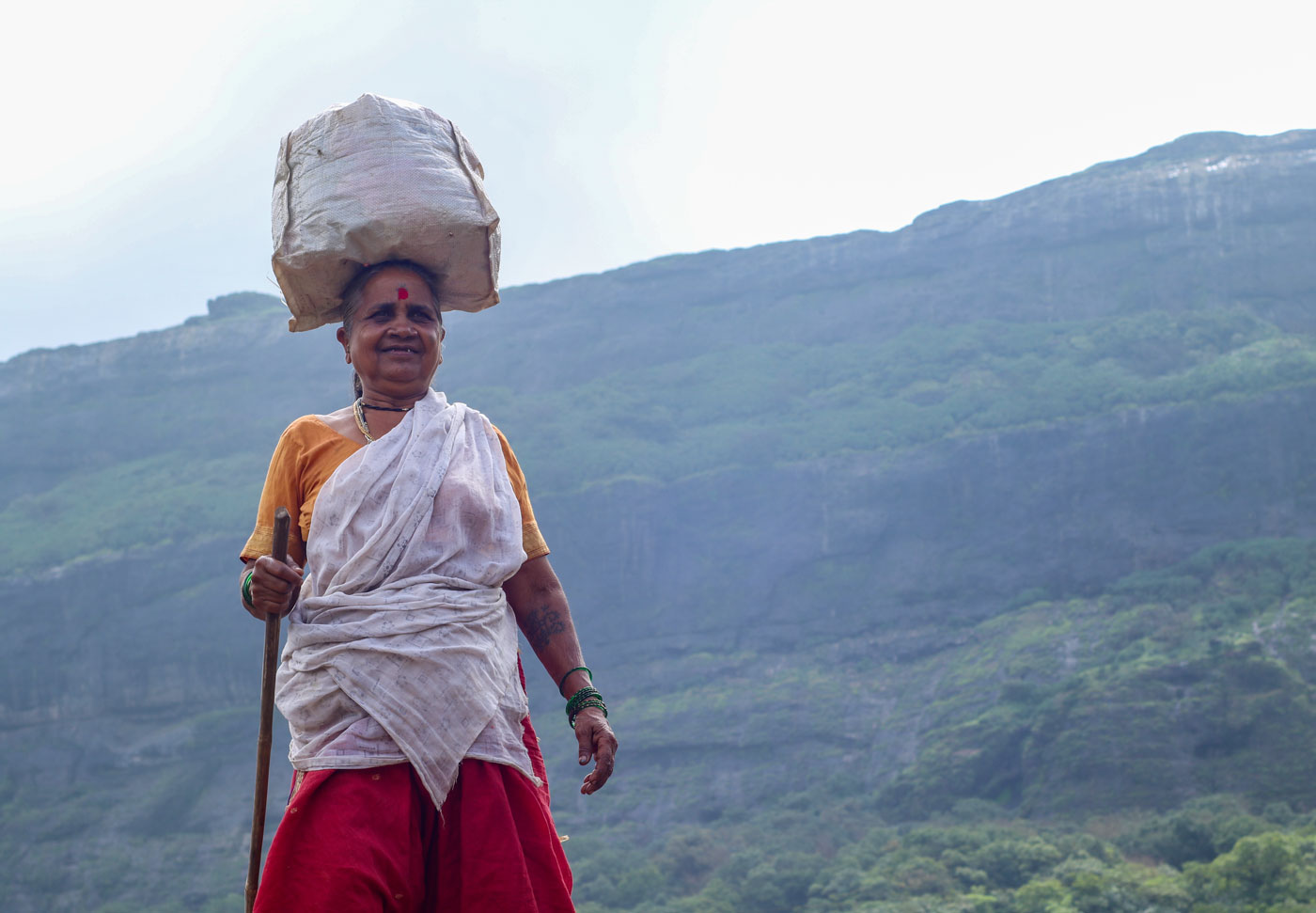 Wearing only a pair of slippers, 72-year-old Anusuyabai leads the way up the rocky path to the Harishchandragad hill fort. For the past decade, she has been climbing this fort located at 4,710 feet in the Western Ghats. Her climbing began when the family decided to set up an eatery on the top in 2012 and the only way up was, well, climbing. The rocky climb has an incline of 60-80 degrees and it takes about three hours to climb the three-kilometre distance each way.

Later on, Anusuyabai’s family also set up a homestay down below in the plains to cash in on the rising tourist traffic. Today, the septuagenarian is well known among the trekking community, both for her climbing skills and the homely food she serves in both places.

“People ask me if I want shoes, but I am most comfortable wearing slippers,” says Anusuya Badad who is dressed in the traditional Maharashtrian nauvari (a nine-yard saree). She usually takes along a helper and they carry food rations for the small eatery she runs on the top of the hill. It’s the only place that serves a full meal on this hill top destination and is a welcome stop for trekkers.

Her popular eatery is a shack made of mud and wooden sticks. This fragile structure requires rebuilding after every heavy downpour. “We know when the rains are going to be destructive. We shut the hotel [eatery] at the top beforehand, so our guests are safe,” Anusuyabai says. The process of rebuilding takes around two weeks.

The family’s other tourist establishment is a homestay at the foot of Harishchandragad hill. This lies in Akola block of Ahmadnagar district in the village Pachanai, bordered by the fort on one side and forest on the other.

The Harishchandragad fort is said to date back to the sixth century and is a major tourist attraction in the area. “We have roughly 100-150 tourists join us for food every weekend during the season from July to December. People come to enjoy adventure sports and then it’s waterfall season [post monsoon],” says Anusuyabai who will trek up on the weekend to serve tourists at the top. “Until March it is a good time to visit the fort. After that, there are barely any visitors,” she adds.

Most houses in the village are made of thatch and brick plastered with cow dung. A single bulb lights the cooking and washing area of the Badad house, also a mud structure. It has a cemented extension where they serve food and guests can nap overnight. Lunch is priced at Rs. 150 and you get as many chapatis as you can eat along with vegetables, rice, dal and pickle. After expenses, the family earns about Rs. 5,000-8,000 a week.

It’s August, and a bus filled with enthusiastic trekkers pulls up into the parking area at the homestay below the hill past midnight. Bhaskar Badad, her older son runs to the door to greet and guide the trekkers through the dark. He tells them where they can park, and where to place their shoes before they enter the house-cum-hotel. Her younger daughter-in-law Asha helps Aai – as Anusuyabai is called by others – to spread mats for the trekkers to sit on, arranges drinking water in one pot and gets hot tea ready for the group. As the trekkers settle in, Nathu Badad, Anusuyabai’s husband, engages them in conversation and answers their queries, while Bhaskar helps serve breakfast, which is usually poha. “The number of tourists has increased since 2011-12,” says Bhaskar.

The weekends are taken up with running their two eateries but during the week, Anusuyabai and her family grow paddy on their 2.5 acres of land. “Earlier we used to get only four to five bags of rice. Today, with increased labour and the use of hybrid seeds, we are able to harvest 20-30 bags of rice from our land. The majority of this [harvest] is used to serve trekkers,” says 40-year-old Bhaskar. The family keeps the rest for their own consumption.

To stock up on supplies for the weekend guests, Anusuyabai travels to Rajur with Bhaskar on Mondays and Thursdays. Rajur is the nearest city to Pachanai and the roads are ridden with potholes. “The distance between the two is barely 25 kilometres but it takes us more than an hour and a half to reach there on a motorbike,” says Bhaskar.

Pachanai village has around 155 households and a population of 700 people, but the residents say civic amenities are lacking, even rations from the PDS (public distribution system) don’t come. “Our village stopped receiving government rations long back,” says Anusuyabai. And so the villagers took matters into their own hands. When water from the local well became unfit to drink, “we collected a small commission of one to two rupees per vehicle that entered the village for trekking and used this money to buy a motor and pipes to fit at the base of a nearby waterfall,” says Nathu. Recently, public washrooms were built by the forest department.

Anusuyabai was born in neighbouring Kothale. At 16 she married Nathu and moved to his home in Pachanai. After a decade, the large family began to split up with some of them moving away to the cities in search of better opportunities. “Aai would work on our fields and also travel to the neighbouring village of Narayangaon to work as a daily wage agricultural labourer, earning 40-50 rupees for 12 hours of work,” recalls Bhaskar, about life before their eateries.

Harishchandragad is considered a difficult climb even among those in the trekking community. It is steep climb with huge boulders and there are no steps; slippery patches under a waterfall add to the danger. Parts of the trail require one to remove their bags and crawl on all fours, but Aai can manage the entire climb upright while balancing a load on her head.

Earlier this year, Anusuyabai rappelled 500 feet down the fort’s Kokankada peak (1,800 feet). She says, “I have wanted to rappel down that peak for a long time, but who takes an old woman seriously.”

The students would like to thank Ganesh Geedh and Bhaskar Badad for their help in reporting this story.

Rutuja Gaidhani is a final year student of Mass Communication and Journalism at St. Xavier's College (Autonomous), Mumbai. Shubham Rasal graduated from Satish Pradhan Dnyansadhna College, Thane in 2021. They say, “This story opened us to a world that we knew about but fail to acknowledge. The villagers [in our story] helped us see their problems in a different light.”