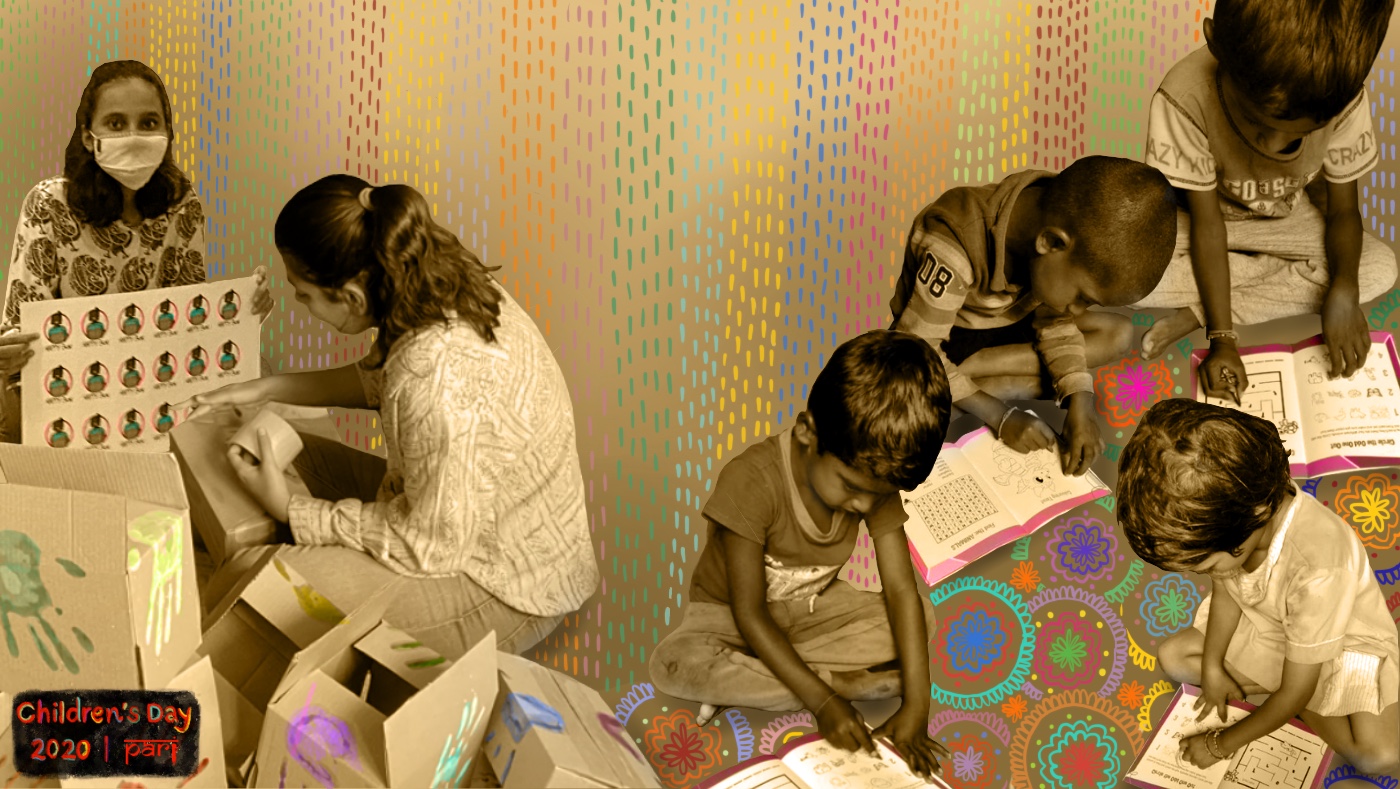 November 14, 2020
Bengaluru, Karnataka
Covid 19, Education, Small world, Things we make
Concerned about school-going children with no internet access during the lockdown, college students came up with an educational storybook-cum-workbook for them. It will soon be translated into eight regional languages
Student reporter: Daya Ambirajan, Tejaswini Nalegave and Tarangini Nalegave

Six-year-old Gokul N. said to us on the phone, “I thought that the box would have textbooks from school but I was so happy to see the fun book inside, and had to fight with my sister to read it first.”

It all began in February when 20 of us students sat around in college thinking of ways to connect with children from marginalised communities. In June, when college began online classes, we wondered how to move forward, and realised the answer, or rather, the question, was right in front of us. ‘What about those students who don’t have access to virtual classrooms?’ A series of spirited online discussions took place with our professor Sharon Lopez and the Happy Box was born. A specially-designed workbook that students could use for interactive learning and play was among the contents of this box.

We named it ‘happy’ for the joy we hoped it would bring and ‘box’ to give it a sense of mystery and excitement. It gave us a chance to be children again. We thought up magical stories that served as both teachers and friends – things that we knew all students missed because of not being able to physically attend class. We added in worksheets to encourage vocabulary building, letter recognition and language comprehension. We had to make sure that the students would be able to work it out without adult supervision as we wanted to be able to reach first generation learners, keen to pick up English language skills. According to our research, it was important that the books could be used by children from Class 1 to Class 6 because fluency in English is not age-specific.

Nishant G., 12 and his sister Vinoda G., 10, got a copy each. “I like the dragon best. I’ve never seen one,” said Nishant, referring to the one he’d come across in the colouring activity section of the book’s first chapter.

Creating the book turned us into overnight writers, artists, package designers and logistics specialists. We aimed to reach less than 100 students in three slums who could not attend online class, would need to be indoors most of the time and were unlikely to have adults around who were familiar with English.

Children like Gokul, Nishant and Vinoda are the ones we wanted to reach with the books we had created. They live in slum colonies of Bengaluru, their parents are away at work all day, and online classes are not an option as they have no access to smartphones and limited or no internet.

Nishant and Vinoda’s mother, Bhavani is a single parent; her husband passed away from tuberculosis a few years ago. She told us, “[With the books] I’m glad they won’t completely forget schoolwork by the time they go back.”

When Supreeti N., a facilitator with Makkala Jagriti, a non-governmental organisation (NGO) working with children in slums, saw the books, she said, “they will be useful for children who attend English medium schools and struggle with the language”. She distributed books to children below Class 6 who live in the Valluvarpuram slum and attend a private English medium school nearby.

We tried to think like teachers and so started with purely educational elements aimed at primary school children, but it didn’t stay that way. We had three main subjects – the solar system, colours and animals. We authored short stories, illustrated them and created activities like puzzles, word searches, colouring, etc. around each subject. We designed it ourselves and made sure that with every page, the student would see something different. We used design tools like Adobe Photoshop, InDesign and Illustrator. We contacted a printer who helped us with packaging.

Finally, the ‘Happy Box’ came together with a ‘Happy Book’ as we titled it, some reusable face masks, crayons and Origami sheets for some of the activities. We ensured stringent hygiene standards while putting the kits together – wearing masks, keeping a distance from each other and using sanitisers.

The chapter based on the solar system was called ‘Sun, Moon and Stars’ and in the story, the sun and the moon were best friends despite not ever being able to meet each other, something we identified with during the pandemic.

We overran the Rs. 2,500-budget given by our college and pooled in some of our own money to cover the difference. Our teachers helped us connect to a few NGOs working with children in government schools. The NGOs took our first set of 75 boxes and invited students to come with their parents and pick them up from school. Many students had gone back to their villages with their parents who were daily wage migrants, as they could no longer stay in the city without an income. The first set of Happy Boxes for students went out to three Kannada-medium government schools in Amruthahalli, Pulikeshinagar and Kempapura in Bengaluru.

When the kits were being distributed, we received videos of the children inspecting the boxes, their faces lighting up as they impatiently pulled out the contents before they had even left the room. Later, we spoke to some of the children and their parents on the phone.

Rajesh, a gardener, said his six-year-old daughter Meghana wanted to start working on the book immediately. Meghana wants to become a teacher when she grows up.

Ramesh M., five, told us he misses his classmates, especially at lunchtime, and his mother said he picks up the Happy Book many times a day.

The daughter of migrants from Tripura, 11-year-old Rupa Nath wants to be an artist or a computer engineer. She said she finished all the activities in a single day, and now returns to the book to read the stories.

A few weeks later, our professor Sahana Das called to say that NGOs from all over India wanted copies of the Happy Book. It was a moment we will never forget. Who would imagine that a first semester college project would grow and reach over 900 students across the country? More was to come.

As more and more orders poured in, and donors of the NGOs helped by covering the cost of printing an additional 1,000 copies of the Happy Book, we asked ourselves – what about children who don’t know English? We decided to get some help with translations. Students from our college came forward to help with this, and we have translated the books into eight Indian languages – Hindi, Kannada, Bangla, Urdu, Marathi, Tamil, Telugu and Malayalam.

Translated versions of the Happy Book will have both English and the regional language it is being translated into, so it can double up as a teaching tool.

We are changing the content as the language changes, so children will now read stories set in their region. For example, in the story ‘Different Together’, the tale begins with the main character (a puppy called Golu) opening his lunch box in school. The contents of this box differ from language to language: the Kannada book has a chakli (a fried gram savoury), the Hindi book has jalebi (fried dumplings soaked in sugar syrup) and so on. Therefore, the story called ‘Hide and Seek’ is Luka Chuppi in Hindi, Kanna Mucchale in Kannada, Lapa Chapi in Marathi, etc. The names also change to make the characters more authentic. Students will illustrate the translated books with traditional folk art forms of the respective states.

The project has grown and now students from other departments are joining us. We are overwhelmed and delighted by the positive response that it has received and it is taking on a life of its own. Even in these strange, challenging times we have found a way to stay connected with each other and the wider community.

The authors would like to thank Aarunya Education Foundation for their help in creating the Happy Book, and Sampark, Swapaksh, Vidya and Makkala Jagriti for increasing its reach.

The Happy Box project was created and developed by students of Mount Carmel College’s Communications Studies department with guidance from their professors. This report on the project was written for PARI Education by Tarangini Nalegave and Tejaswini Nalegave, both second year students, and Daya Ambirajan, a first year student from this department.