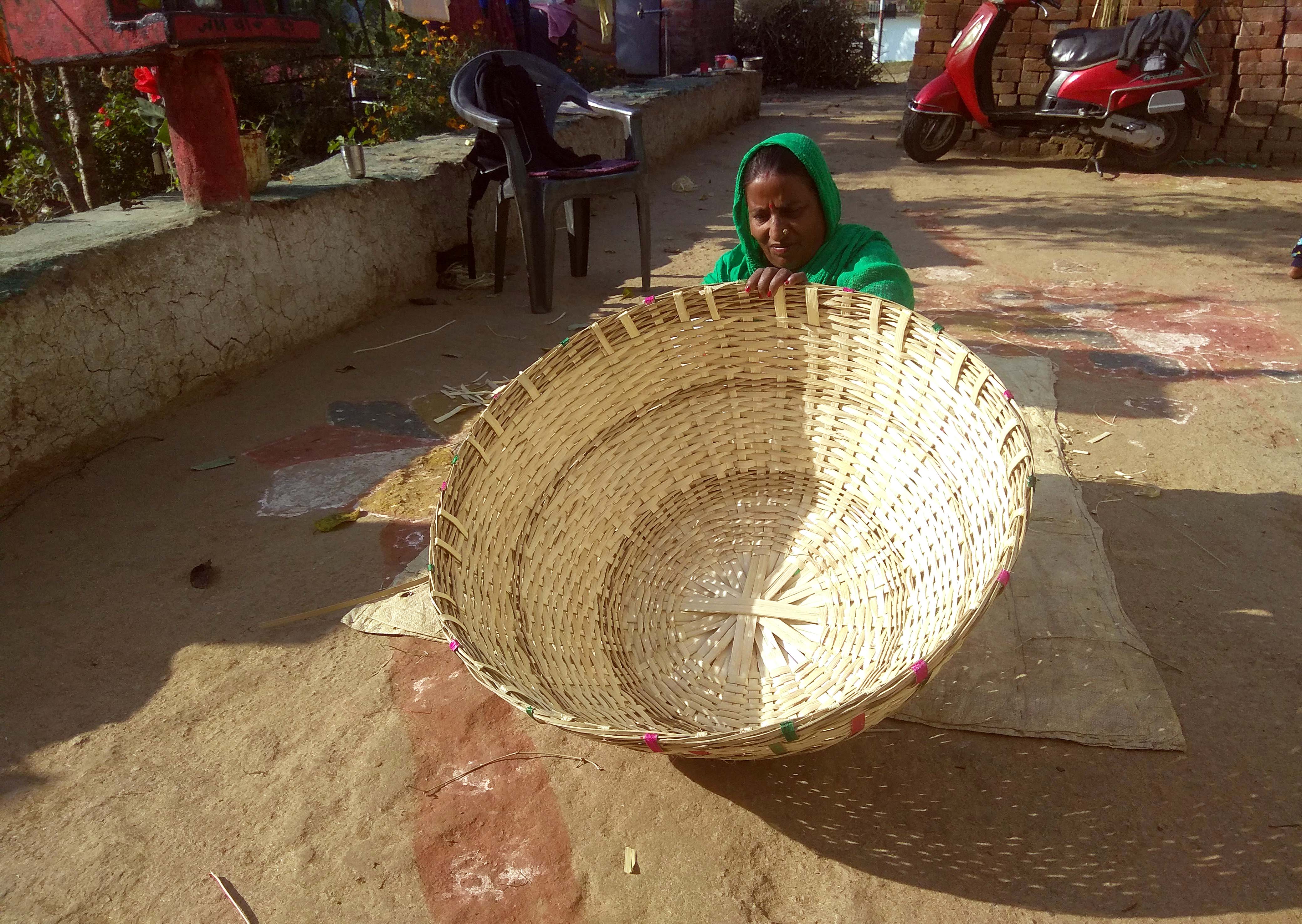 This story was originally reported and written in Hindi. PARI Education works with students, research scholars and educators across India who write, illustrate and report for us in a language of their choice.

“Making and selling these [bamboo] baskets used to be enough to cover our expenses,” says Nirmala Devi, looking around her house. Long and short strips of bamboo along with half-finished baskets are strewn across its two rooms. “Ever since Corona came, people have stopped buying the baskets. So we have stopped making them,” she adds.

Their last sale was in February 2021, during the wedding season. In the year 2020, they say sales were down to almost nothing. “Before Corona, we used to sell [the baskets] by going door-to-door in our village,” says Nirmala’s husband, Gulvansh. “People who had placed orders would come and take it themselves,” he adds.

Nirmala, 50, and her husband, Gulvansh Singh, 58, live in Rachhiyara, a hamlet in Palampur subdistrict, which is almost completely rural – 98 per cent of its 1,89,276 people live in small hamlets and 156 villages. The closest village from Rachhiyara, a few kilometres away, is Dramman, with a population of 662 (Census 2011).

Their kuccha house is surrounded by deodar, orange and pear trees, typical of Kangra district in Himachal Pradesh. The couple belong to the Doomna community (listed as a Scheduled Caste in the state), and they have been weaving bamboo baskets for as long as they can remember.

The Dhauladhar mountain ranges of the Himalayas dominate the landscape of Kangra district, and the Dhauladhar sanctuary is spread over 95,769 hectares of forest land. In the Palampur area where their village lies, tea is an important crop. The tea pickers tie the bamboo baskets on their back and fill them with leaves as they go along plucking them from the bushes. The baskets are also used to store food grains like rice, as dustbins, and even as cradles for children.

“My parents used to do this craft and I learnt it from them,” says Nirmala who never went to school as her family couldn’t afford it. She continued to weave baskets after she was married at 16 to Gulvansh. Her in-laws were also bamboo-craft workers, and the young couple worked along with them. “We would work together and could make upto two baskets a day,” says Gulvansh. The couple have passed on their skills to their two sons, Amarjeet and Ranjeet. The young men’s wives, Manju and Rani, help with basket weaving.

Ranjeet, 32, goes to collect the bamboo with his father from the forests in and around their village. “It’s easy to find,” says Nirmala, as the tree-like grass grows densely in and around Rachhiyara. In Himachal Pradesh, 66 per cent of land area is under forests. The men carry the bamboo on their shoulders and must balance the long poles while walking back home.

Sometimes, they buy bamboo from the village market. One pole/stem costs Rs. 250 – sufficient raw material to weave three small baskets or an entire cradle (or kirda). Often, the people who place orders for baskets also provide the bamboo.

“A cradle and a large basket sell for 500 rupees and we can make upto 150 rupees on that,” says Nirmala, who remembers that when she was very young, her parents would charge two to three rupees for the same items.

The wedding season – from January to May – was usually the busiest time for sales. Relatives attending weddings would use baskets to present their gifts, and the orders would be placed months before the celebrations. However, as weddings and large gatherings came to a halt after March 2020, so did the sale of baskets from their home.

Once the bamboo stems reach their home, Nirmala and Gulvansh dry them and cut them into thin strips. Gulvansh removes the rind with a knife and takes out the inner fibre, a dangerous task sometimes. “Minor injuries happen and it is common for us to get cut,” he says.

Manju and Rani remove the bamboo leaves and paint the stem in pink, green and blue, with paint bought from a local store. For Rs. 100 worth of paint, they can colour eight baskets. “Earlier, we could make four to five [baskets] in a week. Now, as we have aged, we are able to make only two to three,” says Nirmala.

Once the bamboo reaches their home, Nirmala and Gulvansh dry it and cut it into thin strips. “Minor injuries happen and it is common for us to get cut,” says Gulvansh. Photos by Amrita Rajput

During the rainy season, which lasts from June to September, it is difficult to find bamboo and cut the stems, and to transport and dry them in their two-room house. “There isn’t much space inside to store the bamboo, so it has to be kept outside the house, but we don’t have space there either,” says Gulvansh.

To overcome this problem, bamboo is cut and fetched before the rains come.

The influx of plastic items has considerably diminished the sale of baskets, so members of the family have taken up other jobs as well. Since 2015, Nirmala has been working in tea plantations during the harvest season (April to August), earning up to Rs. 200 a day. “But work in the tea gardens slowed down during the lockdowns as not many people were allowed to work together. So I didn’t get much work,” she says.

Gulvansh has been taking up construction jobs, where he earns up to Rs. 500 a day. “It has been a long time since I got work. The last time was before the lockdown. Since then no one is building houses. Where will we get work then?” he points out.

Amarjeet and Manju used to run a tailoring business by renting a shop. “As tailors we used to earn 4,000 to 5,000 rupees a month. But the lockdown has hit tailoring and our earnings have decreased,” says Amarjeet.

Nirmala and Gulvansh’s three grandchildren study in a private English-medium school. Nirmala says she could educate her own children only till Class 5 and 8. She is keen that her grandchildren study further and aim for a better life, as the family’s future as basket weavers is not certain, and they are sceptical about what will happen to their craft. “Only people from our village buy from us and they use our baskets for two to three years. But, with people choosing plastic, we are not hopeful about what comes next,” she said.

We are grateful to PARI’s Hindi Editor, Devesh, who edited and worked on the original Hindi version of piece.

Our thanks to Swadesha Sharma, former PARI intern who helped with the English translation.

Reetu Yadav is a final year undergraduate student of Business Management at Shri Vishwanath P.G. College in Sultanpur, Uttar Pradesh. She interned with PARI as part of a one-year course on rural development and management with Sajhe Sapne, an NGO based out of Kandbari hamlet, near Dramman village in Palampur sub-district that works to empower young girls.

She says: “Before interning with PARI, I thought one only needs a vast imagination to write a good story. But while talking to Nirmalaji and Gulvanshji, I realised that telling a real story needs much more. My focus shifted from imagination to the vocabulary and language we use. I learned that impactful stories come from the words of people who live them.

I also discovered my own strengths – that I am able to observe, converse, articulate and tell a story. I understood how to do field work and to interview people without them getting irritated. My first draft became my third and finally fifth one and I learnt how to spot gaps in my piece.”