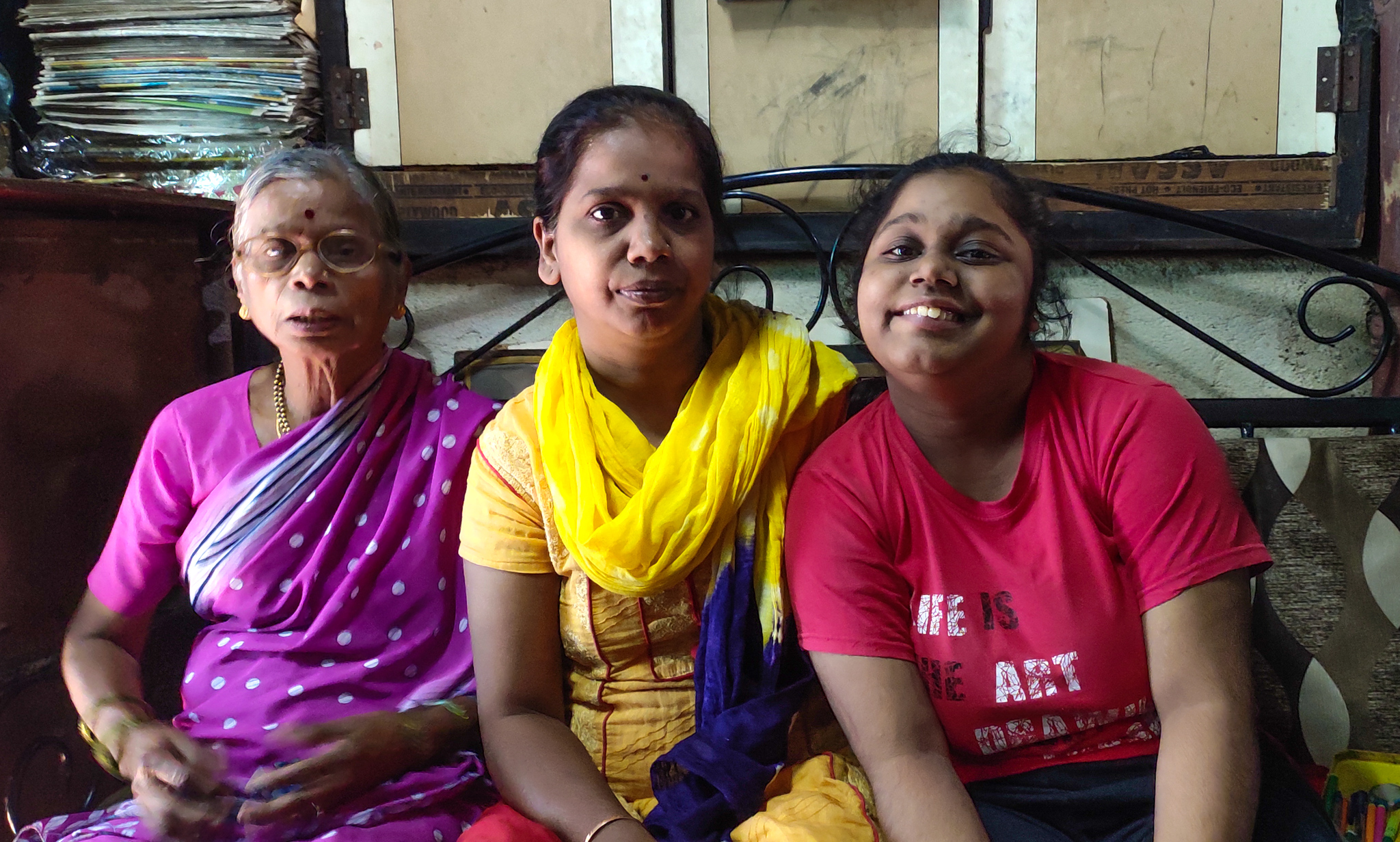 January 29, 2022
Pune, Maharashtra
Covid 19, Education, Gender, Health
A majority of caregivers of differently-abled children are their mothers who must cover day and night nursing, as well as be the primary providers of mental, emotional and social support
Student reporter: Sanviti Iyer

“Tyani mala sangitla nahi ki kay zala hota ani tyacha mala traas hot hota [nobody from the hospital explained what went wrong, and it bothered me],” says Seema Sunil Bhor. Her daughter Swarali was rushed to the intensive care unit (ICU) as soon as she was born. “Doctors at the hospital said there was some sort of injury to her brain,” she says, and so Seema was left wondering if her daughter’s birth via a rushed caesarean section caused her to spend her first 22 days in the hospital.

What Seema does know is when the seizures first began. “I remember it very well. Swarali started getting seizures a day after her first birthday,” she says. An MRI found that the right side of her brain had not been developing at the pace it should be. Fifteen years later, Swarali suffers from seizures, sometimes up to four times a day. The World Health Organisation’s definition contains that epilepsy is characterized by brief episodes of involuntary movement that may involve a part of or the entire body.

“Her fits are sudden and unpredictable,” says Seema. “She can walk and use the bathroom on her own, but we don’t allow her because she can have a seizure at any time,” she added. These seizures are triggered by changes in chemical and electrical activity in the brain. The recurring nature of the seizures means that children with paediatric epilepsy are limited in terms of their movement and the activities they can engage in.

According to this report, epilepsy is one of the most common serious neurological disorders prevalent in childhood, and more than 50 per cent of seizures start in childhood. However, there is a disparity in terms of access to treatment for the condition as Dr. Deepa Bapat, a clinical neuropsychologist and professor at Pune’s FLAME University, points out: “Centres specialising in epilepsy are few and typically located in cities, with rural parts of the country remaining under-serviced.”

Bapat goes on to explain that epilepsy is the most common neurological illness and shows up in many different types of seizures that are often missed. In the case of children, there is a high number of seizure cases that develop into epilepsy, like Swarali.

The number of seizures Swarali has in a day differs from day to day – some days she has none, and on others, she can have over four seizures. “This affects her mobility and independence,” says Seema, who is more worried about the onset of her daughter’s menstrual cycle. “She doesn’t understand what is happening to her, and I do everything for her [including changing her sanitary pad],” says Seema, Swarali’s primary and often sole caregiver.

An overwhelming majority of caregivers of differently-abled children are their mothers who must cover day and night nursing, as well as be the primary providers of mental, emotional and social support.

“She has to take four tablets in the morning and four in the evening. They are very expensive,” says Seema, who has been struggling to fund the bill for her daughter’s and recently took up a part-time job.

Swarali lives with her parents, brother, and paternal grandmother in a one-room house in Sahakarnagar, Pune. Her father, Sunil Bhor, drives a rickshaw for a living. During the lockdown, he had no income for many months. Even after the lockdown ended, people were wary of using rickshaws and public transportation, and he found it difficult to earn a steady wage. “Fortunately, we own the rickshaw, so we didn’t have to dip into our savings,” says Sunil, Swarali’s father.

Medicines are not the only expenses. “We have to go for check-ups once or twice a month because even a slight change in her weight will mean we need to change the dosage of the medicines,” explains Seema. “Some doctors suggest surgery, but it is a very risky one and very expensive as well. We don’t want to risk anything right now,” she adds.

Before the pandemic, Swarali used to attend Jeevan Jyot, a school for children with disabilities on Karve road, Pune. She used to engage in a lot of activities, and she especially enjoyed activities with colour. “Swarali can walk and talk, but she can’t comprehend and understand things like you and me. In school, she could relate to the other children her age with disabilities,” says Seema.

The onset of the Covid-19 pandemic and the subsequent lockdown meant that she couldn’t go to her school anymore. Jeevan Jyot conducts online classes for students, but “Swarali is very restless and can’t sit in one place and follow instructions. She can’t concentrate on what her teacher is saying, even if she’s explaining what the activity is,” says Seema. Swarali also found it difficult to follow the teacher online, and without meeting her friends, she didn’t enjoy the online activities. The family’s precarious financial situation also makes it difficult for her to attend virtual classes.

Schools and colleges have reopened in Maharashtra, and although Swarali’s school is open, there are new challenges of Covid protocols to be followed by students. “Swarali doesn’t understand why she needs to wear a mask and how Covid could affect her. If she were to go to school, it would be difficult to ensure that she keeps her mask on throughout,” says Seema. Hearing her, Swarali interrupts saying, “I want to go back someday.”

Currently, Swarali attends another school, the PRA Foundation, which is also closer home. Here there are fewer children, so it feels like a safer choice. Besides, the foundation has waived her fees.

Swarali is woken up every day at 8 a.m. and given a breakfast of tea and biscuits, before being dropped off at the foundation. Although she can feed herself, since “She can’t recognise or communicate when she feels hungry or thirsty, her caregivers have to remind her to drink water and eat her lunch,” says Seema. By 5 p.m., Swarali is back home.

“She doesn’t go to the foundation every day. It really depends on her mood,” says Seema and the family doesn’t force her to go if she doesn’t feel like going. “I’ll go next Monday only now,” Swarali quickly interjects. On the days she doesn’t go to the foundation, she spends time scribbling in her notebook. “I really like doing this,” she says, showing me the lines and circles she has drawn.

Children with epilepsy like Swarali can get fits even in their sleep and caregivers have to remain alert even at night. “It’s been a few years since I have slept deeply,” says Seema. “So many things changed the day she was born.”

Sanviti Iyer is finishing an undergraduate degree in journalism at FLAME University, Pune. She chose to write about Swarali because, “I wanted to better understand the discrimination that women with disabilities face and also learn about their caregivers – most often their mothers and other female members of the family. Working with PARI Education helped me understand how to write their stories sensitively.”