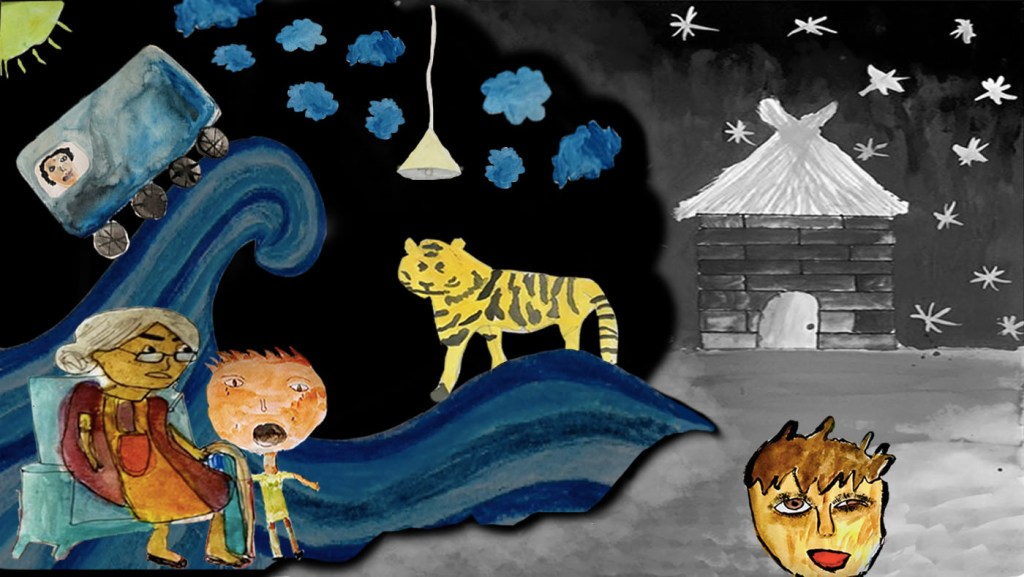 Ten-year-old students of Class 5 in Ascend International School, Mumbai have written and illustrated seven bi-lingual stories based on original PARI articles. This writing project was part of their school work, and is a wonderful addition to our Inspired by PARI section.

In Mumbai’s Ambujwadi slum, Muzafar’s class test is looming ahead and he must juggle selling vegetables with studying. Also in Mumbai, unhappy to shift out of their home in the Aarey forest and into a highrise apartment building are the Gayakwads and their dog Doggy. In an even bigger forest, further away in Yavatmal district of Maharashtra, Adhya plans to save the tigress Avni’s cubs.

Meanwhile, up north in the Himalayas, teens Adesh and Videsh will be hunting caterpillar fungus to help pay their mother’s medical bills. Young protagonists Mounika and her new friend Arav plan to sell the Kondapalli toys. Murthy, a fisherman and the first surfer in his village, opens up opportunities for other young people at a beach near Chennai to learn and love the sport. Finally, Harjeet, armed with a danda (stick), arrives at Delhi’s borders to support farmers.

This bi-lingual story titled The Strong-Willed Man Of Sonipat begins with a striking question: “Imagine trying to walk after falling off the roof?”

The students are writing about farmer Harjeet Singh who is unable to walk after an accident he suffered in 2017. He still makes the journey to the borders of Delhi to join the lakhs of farmers protesting the three farm laws passed in September 2020.

“We choose his story because we think it showcases a single person’s importance in the protest and his struggles throughout the journey,” the authors said.

‘The Gayakwads lived in an undisturbed, untroubled hamlet called Prajapurpada, located in the Aarey forest in Mumbai.’

The story, Caged by change: A happy to sad Adivasi life describes the life of  Laxmi Gayakwad, ‘an old lady in a velvet silk saree’ who lives with her daughter Sangeeta, her two sons Ladak and Janu and their families, and ‘Doggy the dog’.

The students read ‘Caged in concrete: an Adivasi urban nightmare’, by Jyoti Shinoli, published in PARI on March 6, 2018. The students cover the journey of Laxmi Gayakwad and her family after their home was razed to make way for a Metro car depot, and they were forced to shift into a matchbox-sized flat in a Slum Rehabilitation Authority building. They write: “The next morning Doggy the dog wanted to go for his morning walk but there was no space. He whimpered. He was used to running around in the forest with its plants and trees. He missed herding the farm sheep. He wanted to go back home. They all did.”

Surfers of Kovalam is a story that follows Murthy, a fisherman and the first surfer of Kovalam village, near Chennai. The students trace Murthy’s journey of learning how to surf, finding friends to surf with and eventually, co-founding ‘Covelong Point Surf School’ in Kovalam.

The students based their story on Waves of change, written by musician T.M. Krishna and published in PARI on December 18, 2014. “There was so much passion shown in each and every person in this story, and it shows us that we need to make changes and stop following old traditions that do not work well any more,” said the authors.

Muzzafar Sheikh, a student living in the Ambujwadi slum in north Mumbai is the hero of the story Story of Muzaffar’s Online School. When Muzzafar’s parents’ income is hit by the Covid-19 lockdown, he needs to find daily wage work to support his family. However, he still wants to continue school. Read this inspired and fictionalized account of his struggles to access devices for online classes and manage schoolwork while selling vegetables.

“So many people take the fact that they have an education for granted. This story opened our eyes and taught us to appreciate what we have. Everyone should have the opportunity to learn,” the authors said.

This illustrated bi-lingual story is inspired by Online classes, offline class divisions, a story by Jyoti Shinoli, published in PARI on December 24, 2020.

“Tigers are beautiful creatures, trying to mind their own business,” observe the authors of Avni and her cubs as they set about re-constructing the story of T1, the tigress Avni.

On November 2, 2018, T1, was believed to have killed at least 13 people in Yavatmal district and was shot. In this piece, the students follow what happened in Yavatmal and add their fictionalised future for Avni’s cubs. “Adhya…wished for the cubs Zara and Bone to be safe. She wished they were in a place where no hunter could harm them, no one could get rid of their habitat and they didn’t have to kill a human for food and water. We humans have taken over such places from tigers due to poaching, deforestation and more.”

They were inspired to write this after reading In tigress T1 territory: chronicle of a killing a story by Jaideep Hardikar published in PARI on November 5, 2018.

Shenanigans of the famous fungus is set in a village located in the icy cold Himalayas. It follows the journey of Adesh and Videsh, who must hunt for caterpillar fungus hunting to pay their mother’s medical bills. In this inspired  version, our student artists try to imagine the kinds of people and the circumstances that drive them to engage in the illegal cross-border trade of this fungus. The story is replete with realistic details that include thick woollen sweaters, icy cold baths in the early mornings, long walks under a sharp sun and the blue tarpaulin sheets that shield the boys at night.

Their story was inspired by A fungus is financing families in Pithoragarh, a story by Arpita Chakrabarty published in PARI on May 18, 2018.  “It was a huge inspiration for us. We want to thank the writer of this piece,” the authors said.

A story about toys offers a possible solution to the toy-makers of Kondapalli. Toy Trouble is about toy-makers from Andhra Pradesh’s Krishna district who have made wooden toys for generations, but now fear that their signature craft may not survive beyond the decade.

The students say: “We felt the story would let others learn about the hard work that toymakers put in to supply kids with their toy[s]. This story makes us appreciate with these toymakers who are not able to earn much money despite working very hard.”

Students re-imagine this future and introduce modern details in this fictionalised version of ‘No longer a toy story’ by Rahul Maganti and published in PARI on May 18, 2017.

Ascend International School, Mumbai reached out to PARI Education for support with their Grade 5 writing project they were designing around ‘rights and responsibilities’ – a part of their IB (International Baccalaureate) curriculum on realistic fiction. The themes were conflict resolution and social justice and they felt PARI stories covered these.

The students went through the PARI site and chose a story that inspired them to begin their task of writing realistic fiction – bi-lingual books replete with illustrations.

Their teachers: Prachi Dalal, Emily Nicolson, Archana Palan and Lavanya Vadavalli wrote to us saying: “The PARI project was a wonderful learning experience for our students. It was challenging and introduced our students to diverse perspectives from rural India. Most importantly, it helped them build bridges of understanding between the rural and urban.”

The PARI Translations Team helped with the Hindi translation of the students' writing.