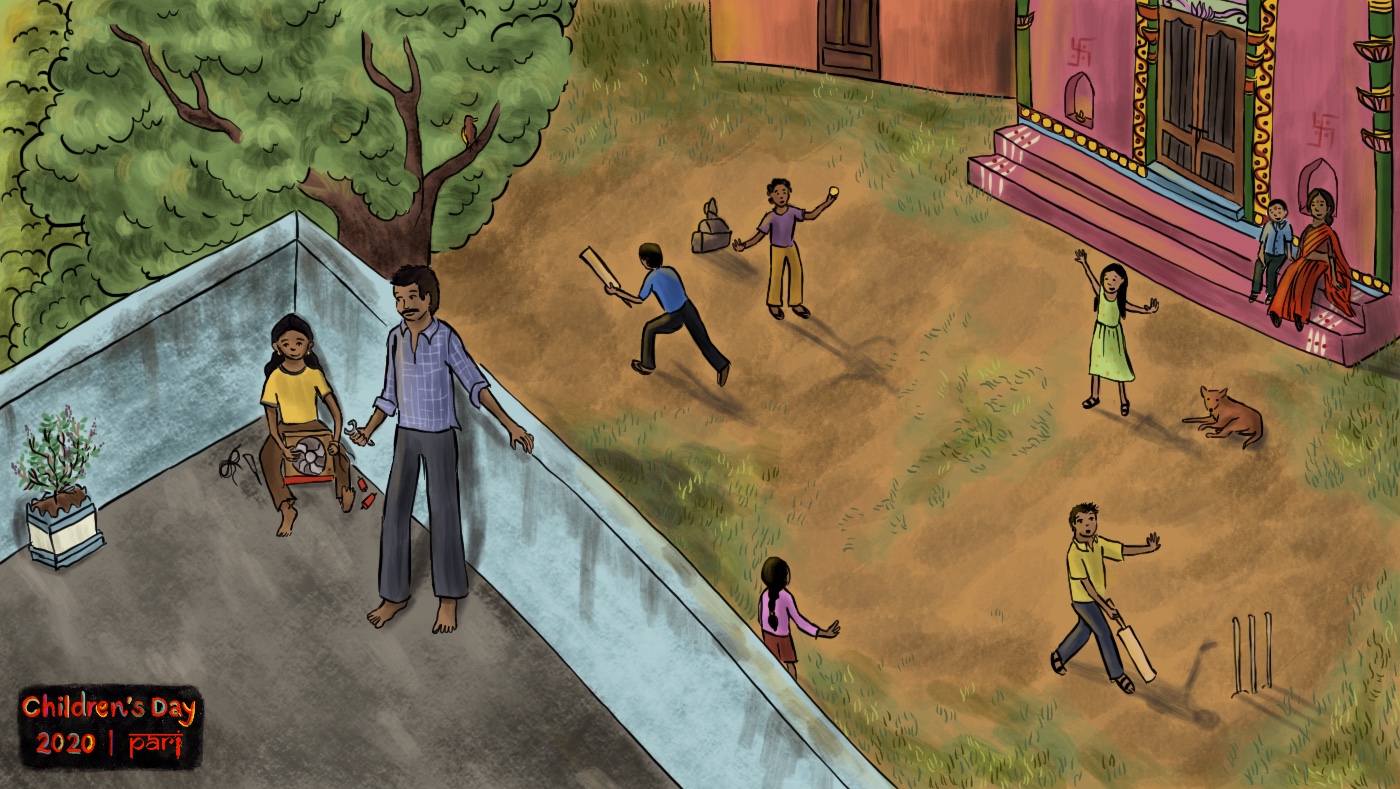 Student volunteers from CRY – Child Rights and You – worked with PARI Education on documenting the lives of the children of migrants in urban India and how the lockdown has impacted their lives.

In ‘My dream is to become an airhostess‘ we meet Ridhima. Her parents moved from Uttar Pradesh to Mumbai in search of work, and are keen to see their children educated. Reduced earnings during the lockdown have forced her family to cut down expenses, but young Ridhima’s dreams for the future remain intact.

Lavnee’s parents similarly moved from Bihar to Delhi in search of employment opportunities. A tragic death in the family and mounting medical expenses put a strain on their finances; the lockdown has only added to it.  Lavnee wants to become an artist but she thinks it may not be a practical or affordable option for her future. She shares her story with ‘I like all mechanical things‘

‘My dream is to become an airhostess’

It was 4 a.m. and I woke up to the sound of screaming outside our house. When I got up to see what had happened, I saw my father shouting at some people. They were government officials and they had come to demolish bamboo huts in the neighbourhood like ours. We were forced to move. Now we have a small pucca house near Kadeshwari temple in Bandra, Mumbai.

I am Ridhima Rajesh Pafi. I am 12 years old. My parents, Pratima and Rajesh came to Mumbai from Uttar Pradesh in search of work in 2011. My mother is a domestic worker. She sweeps, mops, washes dishes, cleans bathrooms and sometimes takes care of the children in her employers’ houses. My father drives a rented taxi. My parents are keen that my siblings and I get an education – they believe it’s the best gift parents can give us.

My sister Rajnandini is 21 years old and in college. When she graduates, she wants to be an English teacher. My brother, Rahul is 19 years old. He failed Class 9, and ever since then he has been out of school. He works at an electronics shop in the afternoon on weekdays.

Before the coronavirus, my mother used to earn 8,000 rupees a month by working in five to six houses and my father earned around 14,000 rupees a month. Since the lockdown, their income has reduced – my mother only works in one house now and my father has not been able to get as many rides as he did earlier. We have had to cut down our expenses; one of the consequences is that we don’t get to eat chicken or eggs that often anymore.

I start my day with tea and roti for breakfast with my family. My father leaves for work in the morning. Sometimes, he leaves at odd times like 2 a.m. or 3 a.m. as he needs to go whenever his boss needs him. My sister and I have the responsibility of cleaning the house after both my parents leave for work. I am usually alone at home till my mom comes back late in the evening.

I go to St. Joseph’s Girls School. I love my school; I enjoy studying mathematics. These days, I am attending online classes using my smartphone. Often, the internet connection fluctuates in our area because of which I can’t hear the teacher clearly, so it’s difficult to understand what she is saying. I also study on my own and if I don’t understand something, my sister helps me whenever she is free.

Later in the evening I go and play in the garden near the temple. My friends and I like playing football and cricket. Playing outside is fun, but when it rains, I can’t go because there are many snakes in the bushes next to the temple.

In my free time I like to watch movies on TV or YouTube videos on my mother’s phone. While watching a movie one day, I realised that I wanted to be an airhostess. I want to fly and have the experience of sitting in an aeroplane. I spend countless hours on YouTube watching videos of air hostesses. I love the idea of dressing up in beautiful clothes and wearing makeup. I would like to give people food and be hospitable to the passengers, just like the women in the videos do. I get new clothes once a year on Christmas. Christmas and Holi are my favourite times of the year.

At night, I help my mom serve dinner. Our dinner is basically the leftovers of our lunch which is usually dal-chawal and egg fry. On occasions, we get to eat chicken curry. My father was a cook earlier and he often helps my mother cook. He used to come home late at night, but now, he returns home earlier because he doesn’t have as much work as he did before.

We are five people living in a 10 x12 feet house; we have a bathing stall in our house but no toilet. My father, brother and mother sleep on the floor and my sister and I sleep on a mattress. It has been raining so to prevent water from seeping into the house, my father used cement to seal the cracks. Sometimes when we are sleeping, rats bite us. We have many rats and insects inside our home but I am not scared of them.

Seven months ago, the government installed eight washroom stalls for women in our neighbourhood. There are many families that live in my area, and all the women and girls have to share these stalls. There are no stalls for the men and they usually go to the nearby beach to relieve themselves.

I am Lavnee Thakur and I’m 13 years old. My family is from Gangtol in Bihar’s Darbhanga district, but my parents moved to Delhi before their first child, my elder sister, was born.

My father Rampravesh Thakur comes from a family of goldsmiths but he wanted to become an electrician, for which he went to Shimla for a few months of training. After their marriage in 1998, my parents shifted to Delhi in 2000 and my sister was a baby then. My brother was born in 2002 and I followed in 2008. When I was born, my parents were very happy, but back in Bihar, people had wished for a boy. Luckily we didn’t have to face that as we were far away.

My parents moved to Delhi because employment opportunities are better here. The burden of setting up a new home with a baby on the way put my parents into a lot of debt [around 10,000-12,000 rupees]. Apart from his work as an electrician, my father also tried his hand at a couple of other jobs like working in a field, helping with harvesting and working as a daily wage worker at a construction site.

I like all mechanical things. I made my first science project when I was in Class 3. It was a simple table fan, but it operated with electrical power. My father helped me make it. It was an easy project. My teacher was so impressed that she kept the fan in the science lab so that everyone could see. After that, I got more curious and even use YouTube now to learn. My parents give me money to buy the stuff needed for this; I buy what I need from a second-hand shop.

I have started observing my father when he fixes things around the house. Initially, he didn’t let me help him because I was very young, but during the lockdown, we both fixed a fan whose regulator had stopped working. He doesn’t let me fix things alone, without his supervision.

In our family, everything was going well until 2015 when my older brother, Rajeev started having seizures. My parents took him to the best government hospitals in Delhi but nothing helped. My mother Rani Devi had studied till Class 9 and was able to communicate with the doctors and understand the treatment my brother was advised. She was the one who used to stay with my brother in the hospital. She rarely came home; my father worked and took care of my sister and me.

In a year, they had exhausted their savings on his treatment in Delhi so they decided to take him back to our hometown. In Gangtol, he underwent ayurvedic and homeopathic treatments but that didn’t work either. They brought him back to Delhi and admitted him to the All India Institute of Medical Sciences here. Sadly, he passed away in 2017.

When my brother passed away, my father had to borrow money from his employer to conduct his cremation. My parents are still repaying the loan.

My sister is in her second year of college and got married in January this year. My parents had to borrow money again from relatives, friends, and my father’s boss for her wedding. They are repaying this loan as well.

I love drawing. All I want to do everyday is draw, but I don’t want to make it my career because it won’t pay much and people don’t seem to take it seriously. I want to do something that astonishes everyone, which makes people say, ‘Wow, Lavnee really did it.’ I want to become an engineer and create an app to help people who cannot draw. I tried to join a course a few weeks ago to make apps but the fees were too high – we cannot afford 32,000 rupees for a course. Maybe someday my parents will be able to.

I miss my school and friends, but staying at home I am able to rest a lot, play, draw, make more science-related projects, and learn how to fix gadgets from my father. My school is a government school. It doesn’t host online classes, but we get homework everyday, which I complete on time with the help of my tuition teacher.

My father hasn’t received his entire salary because of the pandemic. We are living off my mother’s savings. I hope to help make our financial situation better some day.

About the reporters
Tavisha Jain is a student of Class 11 at the Neev Academy, Bengaluru and a volunteer with CRY. She says: “The process of documenting the story of a young girl, not much younger than me, deepened my empathy and understanding of migrants.”
Areeba Khan is a Psychology honours student at the university of Jamia Millia Islamia, New Delhi and a CRY volunteer. She says, “Getting to know Lavnee and forming a bond with her that too virtually, was a challenge, but I’m glad I could document her story.”