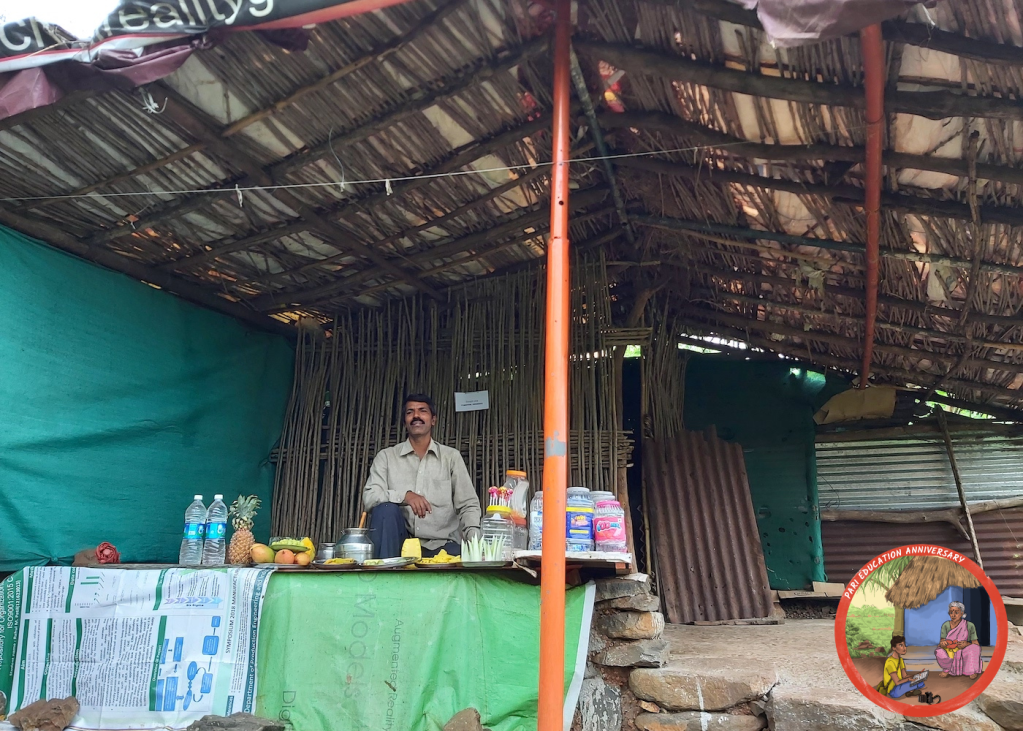 August 15, 2021
Pune district, Maharashtra
Covid 19, Environment, Things we do
Dattatreya Nailkar has an encyclopedic knowledge of trees and their uses, and he generously dishes out this information to trekkers climbing Sinhagad fort who stop at his stall enroute
Student reporter: Aditi Dindorkar

Dattatreya Nailkar, 53, reels off the benefits of lime juice over the sound of Bollywood songs playing on his Nokia phone. He stops when people line up at his stall, en route to Sinhagad fort in the Sahyadri hills of the western ghats, switching to a chant of medicinal trivia and anecdotes about different plants found in and around the area.

“Once, a group of students came to camp at the [Sinhagad] fort. They didn’t have a spoon to stir their food and thought they would use a bark instead. The next day all their teeth started shaking. They had used the bark of dat padi (Gnidia glauca), which literally means ‘teeth dropper’!”

Dattatreya, now has our attention and a crowd gathers around him as he hands out lime juice, slices of cucumber, raw mango and candy.

“I’ve planted Adusa here. When you have a cough, you can make kadha (decoction) from its leaves,” Dattatreya says, pointing to the Justicia adhatoda tree beside his stall.

Nailkar has been climbing the Sinhagad mountain for the last 16 years – ever since he put up his stall. He even has sound advice for the forest department: “Jungle trees should be planted in the jungle. They are trying to plant farm trees like mango, lemon, guava and custard apple [here]. Those won’t grow here because of the fog and cold. They are making a mistake in their planning.”

He points to a tall tree in the distance and says, “It’s not indigenous. It’s foreign. Planted by a forester many years ago.” He then points to the bright orange flowers at the base of that tree. “These are tantani (Lantana camara) flowers from whose center you can suck honey. Their leaves are a potent cure to loose motions.”

As I listen to him, I bite into slices of sour raw mango similar to those he has on an inviting display. He goes on to tell us about medicinal plants found on the mountains – gooseberry (Phyllanthus emblica), hirda (Terminalia chebula), and gulvel (Tinospora cordifolia) “are all good for building immunity”. Nailkar points to the trees around the stall that he planted himself: jamun (Syzygium cumini), karvanda (Carissa carandas), anjai (Clematis triloba) and gooseberry, the smaller and wild rai (mustard seeds) variety found locally.

How does he know so much about trees and plants?  “I learnt about them from my ancestors, and now I pass it on to whoever stops by,” says this fifth generation resident of Sinhagad mountain. Dattatreya is referred to as ‘Datta’ by regular trekkers who greet him with a “Ram Ram” as they pass him.

Visitors going from Pune to Sinhagad fort can choose one of two routes – a six-kilometre drive or a two-hour walk through the Sahyadri hills. The latter will bring you to Nailkar. Trekkers coming up the hills can stop for a quick refreshment here, around the halfway mark, before finishing a climb of roughly 1,440 metres above sea level to reach the hill fortress of Sinhagad in Pune district’s Haveli taluka. The area is lush with trees, plants and flowing rivers.

Nailkar  dropped out of school after Class 7, but says he’s gained a lot of practical knowledge and does his bit to maintain the natural beauty of Sinhagad. He refuses to sell Kurkure and potato chips, even though they are in high demand from his younger customers, “People will eat, throw plastic and litter around. All the other vendors and I don’t even sell cigarettes and tobacco as it will pass on from one group to another and ruin the prakruti aani sanskruti (nature and culture) of the fort. [Instead], people can enjoy one peaceful day,” he adds. He keeps a limited variety of hydrating stuff that is small and sure to sell. His stall has cucumber, amla, raw mango (with masala) and pineapple (all freshly cut) as well as kokum juice and lemon juice. He also keeps a few types of candies (such as Mango Bite and some lollipops).

Nailkar has two homes – one which his sister owns in Ghera Sinhagad village at the base of the mountain, and his own home on the mountain. Ghera Sinhagad is a small village with a population of 655 people (Census 2011). Off season, Nailkar stays here with his family – wife Rukmini and their three children Dipali, 22, Lokesh, 18, and Bunty, 16. During peak season, they visit her in the village every week, but return home to the mountains. On the mountain, Nailkar stays in his pucca house with his wife and children. Their house is right behind the stall and they stay here every weekend as the route gets busy with trekkers who stop at their stall. “We prefer staying on the mountain,” Dipali adds, “Everyone in our house loves nature.”

The mountains are familiar to Nailkar who has also moved around here with his herd of cattle. “We owned about 10 to 15 cows and buffaloes and we used to make khoya in the furnace, wrap it in banana leaves and sell it in the village,” he says. Eight years ago they sold their cattle because, “there isn’t enough grass for them to graze on and there is a shortage of water in the summer. You also have to protect the calves from leopards that prowl the hills sometimes. It’s a big headache,” he explains.

When he was younger, Nailkar worked as a daily wage labourer in Pune. “I didn’t like the work. Fights would break out between the contractors and me. Since, there was no job guarantee they used to remove me from work. So I thought it’s better to start my own business,” he says.

Now he only visits Pune to restock monthly supplies for the stall. It takes him an hour and half on his Honda Activa scooter to cover the 25 kilometres to reach the Market Yard area. His stall earned him around Rs. 8,000 a month before the lockdown put a halt to tourists and trekkers. “During the lockdown, I had to go down to Ghera Sinhagad and work on the fields for a month or two,” he says.

Now he’s back at his stall from 6:30 a.m. to 5:00 p.m. everyday. He’s happy that things are opening up and that he is back on his beloved mountain. “I feel suffocated in the city [Pune]. I’m restless to come back to Sinhagad,” he says.

The path up to the mountain fort is dotted with other families who run similar stalls to make a living. “We don’t feel any competition,” Nailkar says. “In fact, we help each other. Since we sit at different points on the trekking route, we form a chain of communication. For example, if someone is injured, a message for help travels from the top to me. I have a cloth stretcher and first aid box.”

“People go trekking to the Himalayas and come and tell me all about it. So, sitting here I can see the whole world,” he says, smiling into the misty mountain air.

Aditi Dindorkar is a third-year English and creative writing student at Ashoka University. She loves to go trekking around her hometown of Pune. She says: “I’ve always been proud of the greenery surrounding my city but never stopped to talk to the people living in it. Speaking to Nailkar has given me a newfound respect for the jungle. I will always be in awe of his knowledge and love for nature.”