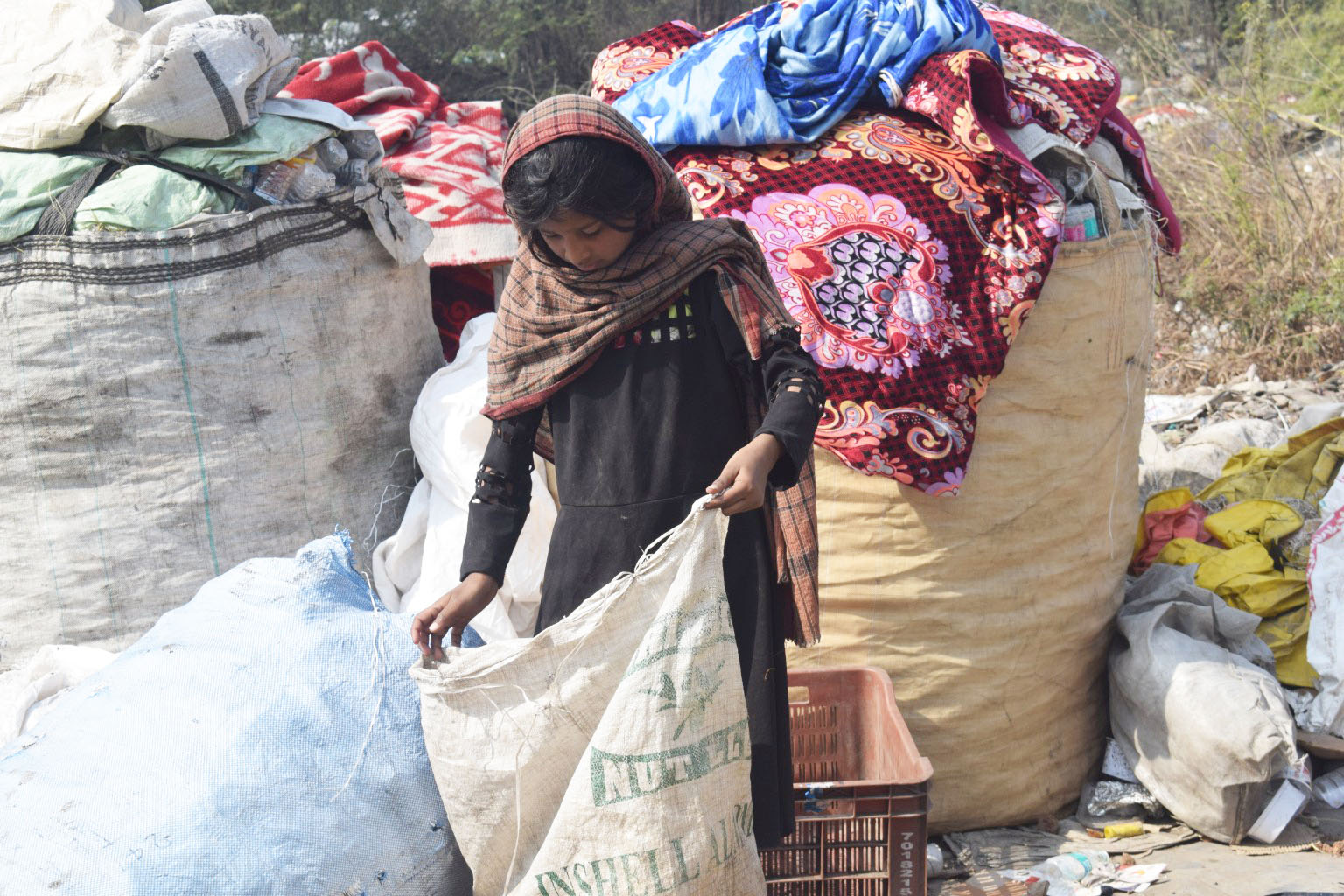 July 30, 2021
Singhu, Haryana-Delhi border, Haryana
Agriculture, Covid 19, Education, Migrants, Small world, Things we do
Muskaan is at the Singhu protest site everyday; happy with the free food, the storytelling sessions at the library and the footwear she received as a gift
Student reporter: Soumya Thakur

Muskaan is only 10 years old but she knows the ins and outs of the Singhu protest site.

“This is the place where they [farmers] give us food and tea. They even pack it for us to take home, putting the tea in bottles,” she says, pointing to the langar tent where food is served free throughout the day. Pointing in another direction she says, “And here is where we got chappals because they saw us walking barefoot, picking through the rubbish,” says the young ragpicker.

“This is where a didi teaches and gives us notebooks and pencils,” adds nine-year-old Chandni, Muskaan’s sister, referring to the Saanjhi Sath and Shaheed Bhagat Singh libraries pitched in tents at the site. Here, college students have been volunteering their time to teach the local children. “They tell us stories from books with pictures. We also make drawings,” she says happily. Both girls dropped out of school because of the Covid lockdown.

Farmers have gathered at Singhu, on the Delhi-Haryana border, since November 26, 2020 to protest the new farm laws. Muskaan and Chandni have been coming to the protest site around 8 a.m. and staying on till around 4 p.m. They take back empty bottles and other recyclable waste that they fill in a large flexi plastic bag; these items will be later sold by their parents, who are also ragpickers.

“We live closeby,” they say, pointing towards an open drain. “Go straight along the naali towards the jungle,” Muskaan says when asked about their settlement. “We are not very far from our basti. Come! We’ll show you,” she says excitedly, walking and running the almost two-kilometre distance from their basti (settlement) to the protest site.

Muskaan and Chandni’s home is a one-room shack with tin walls and plastic sheets for roofing. Their family and the community around them are all ragpickers who have migrated from West Bengal and settled in makeshift tenements on the outskirts of the Narela tehsil, near the once iconic Grand Trunk Road, now National Highway 1,  running through Delhi.

Stopping every now and then, they introduce me to people we come across in their basti – all of whom collect rags and scraps from in and around the protest site for their livelihood. “This is our friend. Will you click a picture of her please?” they ask.

Showing me the stage, the central space at the Singhu protest site at the of the Singhu border, Muskaan says, “Two days ago a man was beaten up very badly here. His turban came off and his head was bleeding.” This frightened the children and they stayed away from the protest site for three days after that.

The girls usually accompany their neighbour Asmina Bibi, 28, who has been doing this work for over 17 years now. “I was born into a kabadiwala [a person who earns a living by buying and selling junk] family, and then married into one too,” she says. “We are all from West Bengal and not from Bangladesh. But how will we prove this and show documents of our forefathers?” she asks, adding that their entire basti supports the farmers (in reference to the 2019 Citizen Amendment Act – CAA. “During the agitations against the CAA, the Punjabi community here supported us with langars (free community kitchens). Now we support them: we are helping by sweeping near their trolleys, cleaning out the garbage and collecting recyclable waste,” says Asmina.

Asmina studied till class 2 in a Bangla medium school in Murshidabad, West Bengal: “The girls [Muskaan and Chandni] have not had a proper formal education. They went to a government school nearby for some time, but after the lockdown they stopped going to school.”

Now nearing their home, Muskaan shows me an abandoned auto and says, “This is where we keep the waste we collect. Everyone puts their collections here and a tempo comes from Sonipat [Haryana] to buy it.” The area in front of their homes is piled with sacks of waste – plastic scraps, bottles, rags and so on.

The lakhs of people filing in and out of the protest site have generated a lot of waste for ragpickers like Asmina and her nieces. So they go from langar to langar, filling large, towering  sacks with  recyclable waste, including plastic bottles, plastic boxes, thermocol plates, foil food wraps, cardboard, old papers and used notebooks. Some ragpickers have switched from picking scraps to collecting plastic water bottles that they can sell at Rs. 20 a kilogram. “I can make 600 to 800 rupees a day selling plastic bottles,” says Asmina. This amount is around three to four times more than what she made earlier.

The increased profits from the protest site have not blinded them to the farmers’ problems. “We want their issues to get resolved as soon as possible so that they can go back to their homes. Farmers grow the food we eat; we can’t eat money,” Asmina says, adding, “If we had land, we wouldn’t be working as kabadiwalas, usually making less than 200 rupees per day. It is important for the farm laws to be taken back or their [farmers] condition will become the same as ours.”

Soumya Thakur is a fourth-year student of BBA-LLB at Chandigarh University.  She comes from a farming family and has been involved in student activism - in areas of gender sensitization. She says: “I came to Singhu from my home in Chhattisgarh to document the protests. At a meeting for the Punjab Kisan Union in Singhu, I saw these children and wanted to write about them."