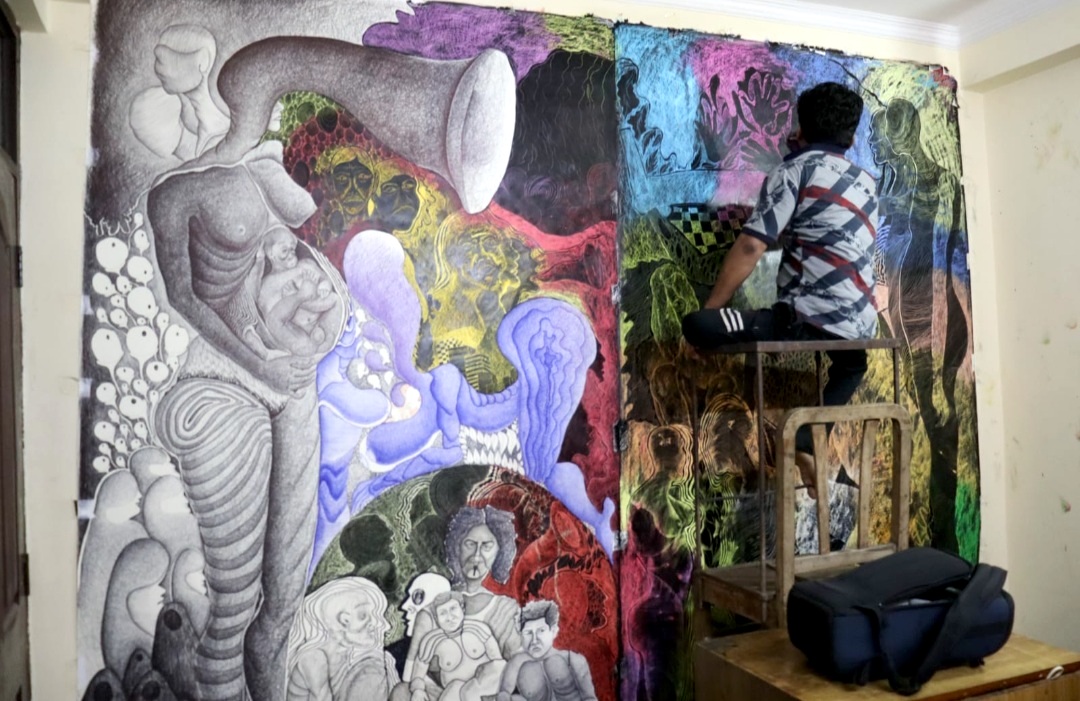 Niyaz Hussain tapes an incomplete painting of a newborn child on his bedroom wall.

As he is doing this, his wife, Sameera (name changed) goes to bring him his paint brushes and palette. This 29-year-old, however, is supported by more than just his doting wife. He stands and walks with the help of rubber callipers and an elbow crutch; the latter he slowly removes, so he can paint with ease. Once Niyaz is comfortable, Sameera leaves the room.

He needs this kind of support because for much of his life he has lived with polio (or Poliomyelitis, which is the medical term).

Niyaz is an artist based out of Jamia Nagar in Delhi, and despite his disability, paints larger than life murals that he says are inspired by the works of Salvador Dali and Madhubani painters.

“I made a 15-foot-tall painting once. To reach the top of the canvas, I removed my callipers and sat on a stool which was fixed over a chair. I didn’t fear falling,” recalls Niyaz. “Although there are times when the callipers bruise my knees, I forget about the wounds when I paint,” he says.

It was a fateful night in the year 1993 when the two-year-old Niyaz developed a high fever. A few days later, his left foot started to bend inwards. A lack of timely and proper medical care caused Niyaz to suffer partial paralysis as well. This is not unusual as one in 200 children under the age of 5 who get infected by the polio virus will end up with irreversible paralysis, says a 2021 World Health Organisation (WHO) report.

In 1995, India accounted for 60 per cent of polio cases in the world. Oral vaccines had been introduced in the sixties but cases remained high due to the low efficacy rate of such inoculation, says this report. It was only by 2014, two decades after introducing the oral polio vaccine, that India managed to eradicate the disease.

In Jaunpur city, Uttar Pradesh where Niyaz was born and then lived, the Pulse Polio Immunisation Programme of the central government had been rolled out. His mother Shehnaaz Begum tried several times to convince her husband Zafar Khan and her in-laws to have Niyaz vaccinated. “His father ignored me because a baby in the neighbourhood had died days after getting the [oral] vaccination. Back then, in Jaunpur, nobody allowed women to travel alone,” she explains.

The night when Niyaz developed a fever (1993), Shehnaaz and her husband rushed him to Jaunpur’s district hospital, five kilometres from their home. “The doctors diagnosed it as polio and said, ‘Nothing can be done here to treat him, please take him to Delhi’,” recalls Shehnaaz. So the family moved to Delhi from Jaunpur in 1993, in the hope that he would be able to access better treatment.

In Delhi, Niyaz was taken to various government hospitals but nothing helped. By then, the family had no money to return to Jaunpur as planned, so they stayed on in Delhi and found work there. “My husband and I worked in a tailor’s workshop at Delhi’s Govindpuri. We were paid by the piece and together we would manage to earn 2,500 rupees a month,” says Shehnaz.

As Niyaz grew older, his mother did not give up on treating him and switched to home remedies that she hoped would heal him. “Amma used to tie bricks to my feet with a rope. As I slept, she used to make sure the bricks hung by the edge of my charpoy [bed]. The weight of the bricks kept my legs straight all night,” says Niyaaz, even now remembering the acute pain. While his paralysis improved, the condition of his left leg remained unchanged.

Today Niyaz lives with the condition and has a 90 per cent disability certificate issued by the Ministry of Social Justice and Empowerment.

The first time Niyaz wore a pair of callipers was when he was five years old. “In those days, callipers were made of iron rods that were very heavy. They weighed a total of two kilos and the kneecaps on the callipers often tore through my clothes, hurting my knees,”  he says.

Due to his painful condition and time spent in visiting various hospitals, Niyaz was seven years old when he was finally enrolled into Class 1 at Sriniwaspuri Government Primary School. At the time, he could not walk and had to be carried to school by his mother. He struggled to use the school washroom like the rest of the children; his mother was often summoned from home to help him.

Despite these difficulties, school was where Niyaz developed an interest in art. Looking back on his school days, he says, “I would often doodle sitting in the last bench.” In Class 4 he applied to take part in an art competition but wasn’t selected. “I knew I had to improve my art,” he says.

At home, his art got him into trouble with his father who used to beat Niyaz because his paintings were representational, considered haram or strictly forbidden in Islam.

Polio didn’t absolve Niyaz of his responsibilities as the eldest of four children, and once he finished school, he began working to support his family. He sold vegetables at the Okhla mandi with his uncle and earned Rs. 200-250 a day. He gave his family the money he made in the morning at the mandi and the rest of the day’s earnings would go towards art supplies. “I enjoyed drawing portraits of workers who took afternoon naps in the mandi,” says Niyaz. At 19, he also worked briefly as a mehendi and tattoo artist and carved designs at a furniture shop, the latter teaching him some sculpting skills. “Whatever I did, I made sure it was related to my art,” he explains.

In 2015, when Niyaz was 23-years-old, he enrolled at Delhi’s prestigious Jamia Millia Islamia University for a fine arts course. After completing the four-year course, he did freelance painting of murals in and around India Gate, Bahadur Shah Zafar Marg and the Delhi Golf Course for a private company.

Niyaz first met Sameera when he visited her house to help her family get a disability certificate for her sister Mamta. He often did this for the people who lived in neighbouring slums. “I used to help people in Sriniwaspuri and that’s when I met her,” says Niyaaz. In 2020, the couple who had been together for seven years, decided to get married. “Propose kia tha… phool dia tha Ansal Plaza mein ki, ‘aap pasand ho… aapse shaadi karna chahta hoon’ [he proposed to me with flowers at Ansal Plaza, confessing that  he likes me and wants to marry me],” says Sameera.

Niyaz now lives with his wife, parents and three younger siblings in a rented flat in Jamia Nagar. On an average, he sells three to four paintings a year and his paintings are priced anywhere between 30,000 and 2.8 lakh rupees. He also has a full time job at a non-governmental organisation (he did not wish to name) where he works as a graphic designer and makes physical art installations. “The pandemic year was surprisingly good for my art. I worked from home and got a lot of time to draw. I sold six paintings in three months,” he says adding that “my goal is not money. I want to earn a name. People must know ‘Niyaz Hussain’.”

Vandana Bansal is a final year student of journalism and mass communication at Vivekananda Institute of Professional Studies, New Delhi. She says, “It was a challenge to write Niyaz’s story as the family had erased many of the painful memories and I had to tread sensitively. The editorial process made me appreciate the minute details that go into the journalistic process. I learnt how to approach stories of people who have disabilities, with dignity." Her previous story on PARI ‘I want to live my truth as a trans man’ was published on November 27, 2021.