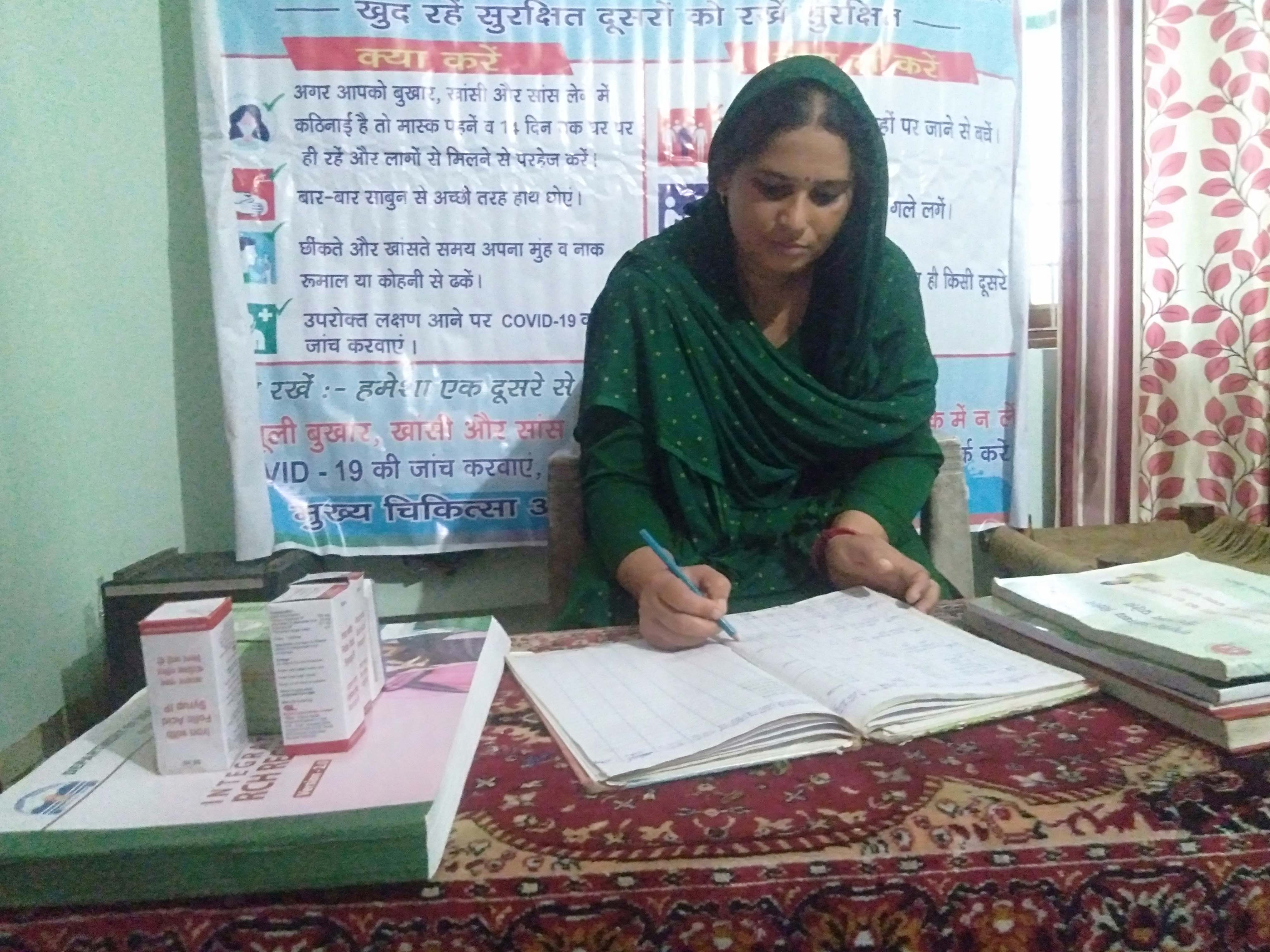 When I was young, I imagined my name ‘Mora Devi’ on the official ID card of an ASHA (accredited social health activist) worker. I even got the uniform – a white salwar kameez with a green dupatta – sewn for one hundred and fifty rupees!

I live in Nain village of Himachal Pradesh’s Kangra district. My father worked as a daily wage labourer at construction sites in and around our village. He was a violent man and often hit all of us, especially my mother when he needed money to buy alcohol. He took his own life when I was ten years old. Soon after that I started working as an agricultural labourer, alongside my mother, who was paid roughly 250 rupees a day. I would join her after I came back from school.

The men who worked with us began to harass my mother and so she moved to work in nearby tea plantations along with other women from our village. The pay there was less – 150 rupees a day.

When I was 15, I remember working for three hours before heading out to school. My brothers also did work like this and together we brought home 200 rupees a day. I would wake up at 5:30 a.m. to make rotis for everyone and then my mother and I would set off for work. We had to reach the field by 8 a.m. and we couldn’t be late or someone else would get hired instead. The landlord had five bighas of land [roughly 2.5 acres] and only five to ten women were given work here. When I got back home I would sweep our house and finish up some household chores.

I dropped out of school after failing two subjects in my Class 10 exams. My brother also abandoned his studies after Class 12. We belong to the Chamar community, which is listed as a Scheduled Caste in Himachal Pradesh; we don’t own any land. When we would visit our maternal grandparents’ home in Palampur, we would work on their farm too and in return, my grandmother used to give us half her harvest.

The first time I saw an ASHA worker was on television. She was armed with a heavy bag and was going door to door giving polio drops to children and simultaneously explaining its importance to their parents. I dreamt of being her.

I got married at 19 and began living in Nain village with my husband, Roshan Lal and his parents, Shakti Chand and Bimla Devi. Roshan works as a carpenter and earns around five thousand rupees a month. I worked with my father-in-law on our one bigha land where we grow rice, maize, wheat and a few vegetables for our own consumption. The paddy we grew would last us a year.

Roshan and I have two sons – Rajeshwar and Amit. My elder son, Rajeshwar is studying for his Bachelor in Arts and wants to join the army. His brother, Amit is in Class 12 and isn’t sure what he would like to do next.

Life went on and I never really spoke about my dream. Then in 2014, a few people from Nain suggested I contest in the ward elections. I had drawn attention to myself when I spoke up about a broken bridge in a recent meeting with the Nain village sarpanch, something no one else had done. The bridge was not entirely broken, but long periods of melting snow had caused a part to crumble and water would leak onto the road making it difficult to walk. Two women from my village contested the election, and I won!

I remember my first ward meeting where I had to speak to more than 200 people. The whole village and my family were sitting in front of me and I felt a bit shy to speak.

Nain has a population of 249 people and as the ward councillor, I looked after 45 households. We installed taps for families who did not have one in their house, and tried to support villagers through various government schemes. My husband, Roshan, supported me a lot in my work.

At the time my children were young, so I used to leave for work only after they left for school. I worked from 10 a.m. till 4 p.m. One year we ran short of money for our children’s school fees and I was able to spend my first stipend of 800 rupees to pay it. I felt happy about it.

In 2018, my five-year term as ward councillor was coming to an end. On enquiring at the Anganwadi I found out that there was a need for an ASHA worker for our village. Without wasting any time, I asked the Anganwadi teacher for a form, went home and discussed this with my husband.

A week after filling the form I received a call for the interview. Three other women from my village had filled this form with me and all of us were selected. Our training took place at a health centre half an hour from Nain. We learnt how to give medicines to pregnant women and take them for pre and antenatal checks. We were taught how to identify tuberculosis patients and when to give them medicines. Just as I had first watched on TV, we were also taught when and how to give children polio drops.

The month of training overlapped with the end of my tenure as a ward councillor. So when I had ward meetings, I would take an hour or two off from training.

As I didn’t have a Class 10 certificate, I was worried about passing the exam post training. However, all the questions were based on what we had been taught during our training and of the 12 women in our class, three of us (from different gram panchayats) passed.

I donned my white salwar with a green dupatta and have been wearing it ever since then.

My work starts at 6 a.m. I cook food for my family, clean my house and feed the cow. Then I collect grass for our cow’s next meal from behind our home, so that my elderly mother-in-law does not have any problem and can feed the cow if she  gets hungry. Then I take two rotis with me, wear my uniform, and leave to start my work visits in the whole village.

Sometimes I don’t get enough time to breathe. I am already thinking about the next day before I sleep at night, what I need to do as soon as I wake up. I can’t remember the last time I was able to rest.

When I return home from work, I wash my hands and feet outside before coming in. I fear that something might happen to my family members because of me. They tell me, “do whatever you want to do, but take care of yourself.” They feel I don’t take care of myself enough. I earn four thousand rupees a month, but the happiness I get from this work is priceless.

Simpal Kumari is a student of business management at Panno Devi Shikshan Sansthan College in Gaya district of Bihar. She was chosen by the non-governmental organisation, Sahje Sapne, for a year-long mentorship and skilling programme that included a short course on documentation with PARI Education. She says: “Before interning with PARI, I used to think that for writing a good story, one just needed a bit of imagination. After meeting Mora Devi I realised that imagination is not the only source of a story for every human being. There is some kind of struggle hidden in their life. I also learned that one has to spend time to get to know people before they will share their story with you. I no longer hesitate to talk in front of people.”