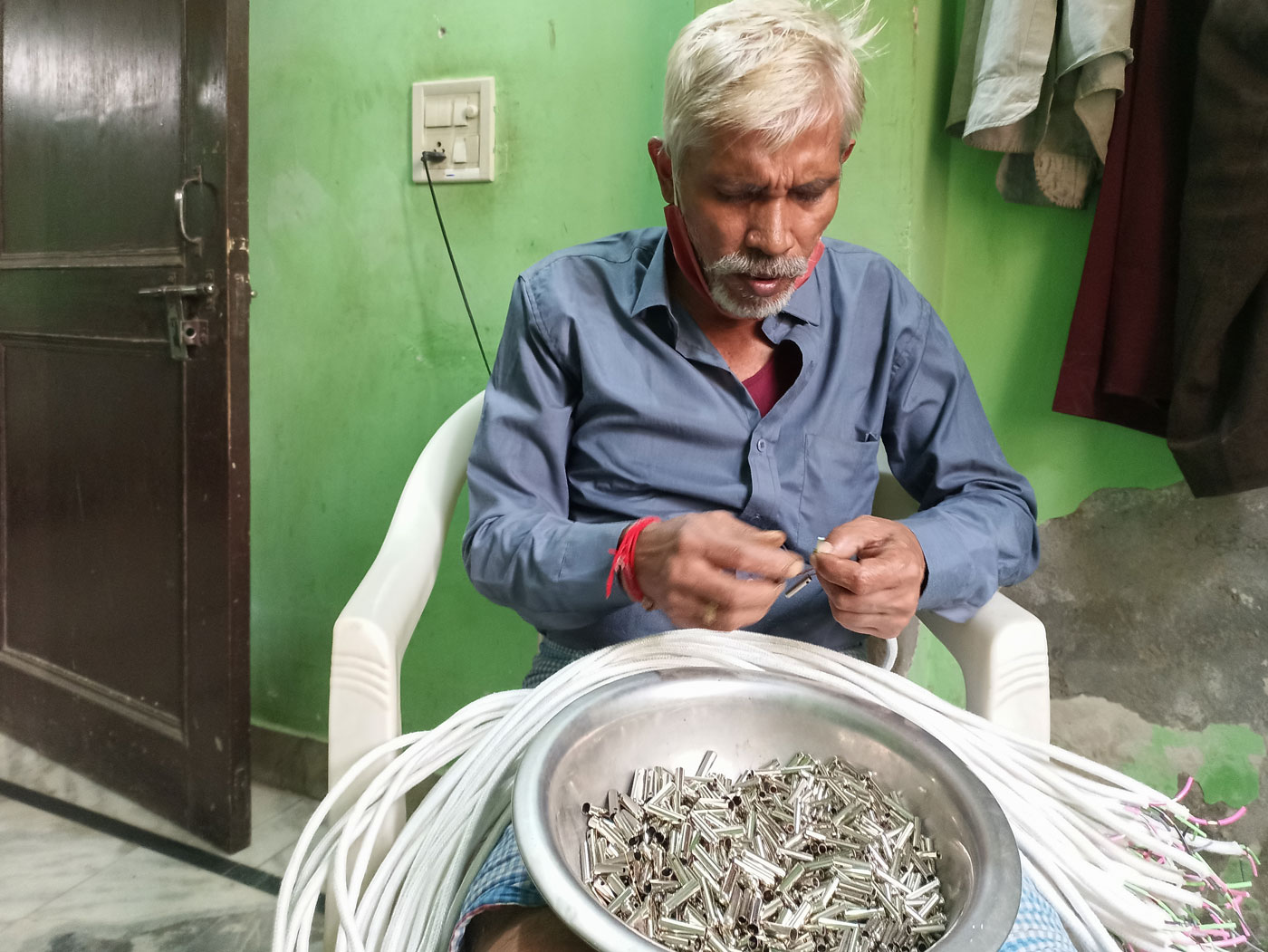 September 12, 2022
New Delhi
Migrants, Things we do
Ram Singh and Satyam Kumar are migrants from Bihar who work in small factories in the capital. These are their stories
Student reporter: Parveen Kumar

“I have been working in Delhi for 40 odd years but I still cannot afford to buy a cycle. On the other hand, the owner of the factory who once used to drive a two-wheeler, now drives a car to work,” says Ram Singh, wondering why he has not managed that kind of success.

Ram came from Purba Champaran district in Bihar 43 years ago. He has been working in and around Anand Parbat in Delhi’s industrial area since then. Most of his work has been in the manufacture of chargers, and moulding wires and cables for television sets and coolers.

“It is as if my entire day is spent within those four walls,” he says as he lives above the factory where he works. The owner of the factory deducts Rs. 2,000 as rent for the room from his monthly wages of Rs. 7,000. The room contains all his possessions – a set of utensils, clothes and a mattress.

This factory worker is drinking his evening cup of tea at a paan stall near the factory where he lives and works. The makeshift shop provides a bit of quiet space amidst the jumble of two and three-storeyed factory units emitting a constant hum.  “Andar khul ke bol nahi paate [We cannot speak freely inside],” says Ram Singh as he motions this reporter to sit next to him.

Running a hand through his hair, he says, “In this busy Delhi life, I did not realise how these past 40 years passed by. When I first arrived here, I did not have a single grey hair on my head. Now, I don’t have a single black hair.”

Ram was 17 when he left his home at Jihuli village in Patahi tehsil of Bihar; the journey of 1,200 kilometres took him about 30 hours by train. The oldest of four children, his family belongs to the Bhumihar community, a dominant caste in the state.

“Living in the city, I am distanced from my family and my village,” he said. Over seven lakh people migrated out of Bihar in 1999-2000 – around the same time as Ram Singh. The number rose to 12 lakh in 2007-2008, says a 2020 report on internal migration in India by the Institute on Human Development.

“I didn’t have a mobile phone and would visit home once every two years. During one visit back home, I found out that Anita [my youngest sister] had gotten married. I hadn’t even received the news,” he added.

Ram says he hardly goes back home now. There is the cost of travel expenses – roughly Rs. 2,000, and then, “You can’t go to the village empty handed. So I visit very rarely,” he explained.

Ram Singh’s working hours are 9 a.m. to 5:30 p.m. and he says that workers like him do not get a fair or minimum wage.  He says his younger colleagues are paid Rs. 10,000 a month but as he is older he is paid less – Rs. 7,000. “The labour is not organised nor is there any trade union in this area. Even if there is a labour union, the workers do not trust them,” he added.

His earnings from working at a factory were not enough, so the 60-year-old took up a job as a night security guard in 2021 and would cycle a distance of 37 kilometres every day. His daily commute from Anand Parbat to Faridabad – on a cycle he borrowed from his sister’s husband – would take him two hours one way. The Rs. 5,000 he earned as a guard was needed to supplement the roughly Rs. 7,000 he earned at the factory. “I am old now but I have never begged for a living. People show pity but I don’t need it. As long as I can earn, I will earn,” says Ram Singh.

This state-approved industrial area is assigned to labour inspector Prashant Kumar Kiran in November 2021. His job involves resolving grievances filed by workers, usually with regard to delays in payment of wages. Kiran doesn’t see too much of a problem, saying, “The number of complaints against the factory owners is very low. If we look at the figures of 2022, till 4th August, a total of 30 complaints have been received, of which 21 have been resolved and 9 are still under process.”

Ram Singh does not have a voter card or Aadhar so he is not eligible for healthcare funds under the Delhi Arogya Kosh. Nor can he access Bihar’s social security pension scheme – Mukhyamantri Vridhjan Pension Yojna that gives people like him Rs. 400 every month.

“It is easier to survive in Delhi as expenses are less than that in my village, despite the fact that people in Bihar are poorer,” says Ram Singh, pointing out that one can at least eat cheaply if not healthily in the national capital.

“From the parts of an aeroplane to those of a tiny pin – everything is made here.”

Satyam Kumar is speaking about the factories that make up the Anand Parbat Industrial Area in central Delhi where he works. These are largely small scale units that process metal, plastic and electrical components for larger industries. Thousands of workers in settlements closeby and even faraway, come to work in these factories.

Satyam was 14 and in Class 9 when he left Bihar to find work in the capital – making chargers at a factory here. “I would have finished school and college if my family’s [economic] situation had been better,” he said, and added, “Nowadays, well-educated people don’t find jobs – who is going to give me one?”

When he started in Delhi, Satyam would attach pins to wires, a job for which he earned Rs. 1,800 a month. Now 21, Satyam earns 10,000 a month making bundles of wire cables. “The machine wraps the wires into circular bundles. At times the wire breaks and the machine keeps spinning, striking the broken piece onto the worker’s hands. It’s difficult work,” he said.

He works six days a week with a weekly holiday on Monday and lives in a room provided by his employer, and cooks his own meals. On the days he returns late from work and doesn’t feel like cooking, Satyam  makes a few rotis and eats them with a packet of curd bought for Rs. 10 from the local shop.

His first few nights in the capital were difficult, away from his home in Chakmahila village in Dumra tehsil of Sitamarhi district in Bihar. “My parents would call on my co-worker’s mobile phone and I used to cry while talking to them,” said the 21-year-old, adding, “Sometimes, I felt like leaving the city and running away back to my village.”

Back in his village, Satyam’s mother, Sindu Devi works in a school kitchen for which she is paid Rs. 4,000 a month. The family belongs to the Kanu community, listed as an Other Backward Class (OBC) in the state. Satyam’s father, Parasnath Gupta used to run a dhaba in Sitamarhi but in  2021, a number of  new dhabas and hotels opened in the area. The family’s income of roughly Rs. 14,000 a month (before Covid) was hit and they eventually had to shut shop.

“Corona used up a big part of our family’s savings. We hardly had any money left. When another lockdown was imposed in 2021, we had to borrow from our relatives to survive,” said Satyam. The family live in a semi kuccha 450 square foot house that he says is crumbling and they have been trying to rebuild, section by section. For this, they have taken a Rs.1.5 lakh loan and are paying it back at four per cent per month. “Once I pay off my loan then I’ll think of building a [proper] house. Doing daily wage work is not much of a life. I want to have a small business of my own,” he said.

Satyam worries about the neighbourhood he lives in and says, “I see young kids using drugs like smack, charas, ganja and drinking alcohol in the park where a lot of violent fights break out; it’s increased after lockdown. If I find a good job somewhere else, I’ll be happy to leave this place.”

Parveen Kumar is a graduate of the Indira Gandhi National Open University (IGNOU) and recently received a Diploma in Journalism from Jamia Millia Islamia, New Delhi.

Parveen says, “While working on this story with PARI, I came to realise that people’s problems are never simply personal or isolated, but are in fact deeply connected to the rest of society. That a person has to leave his village and move to the city for work is of concern for the entire community, state and country.”