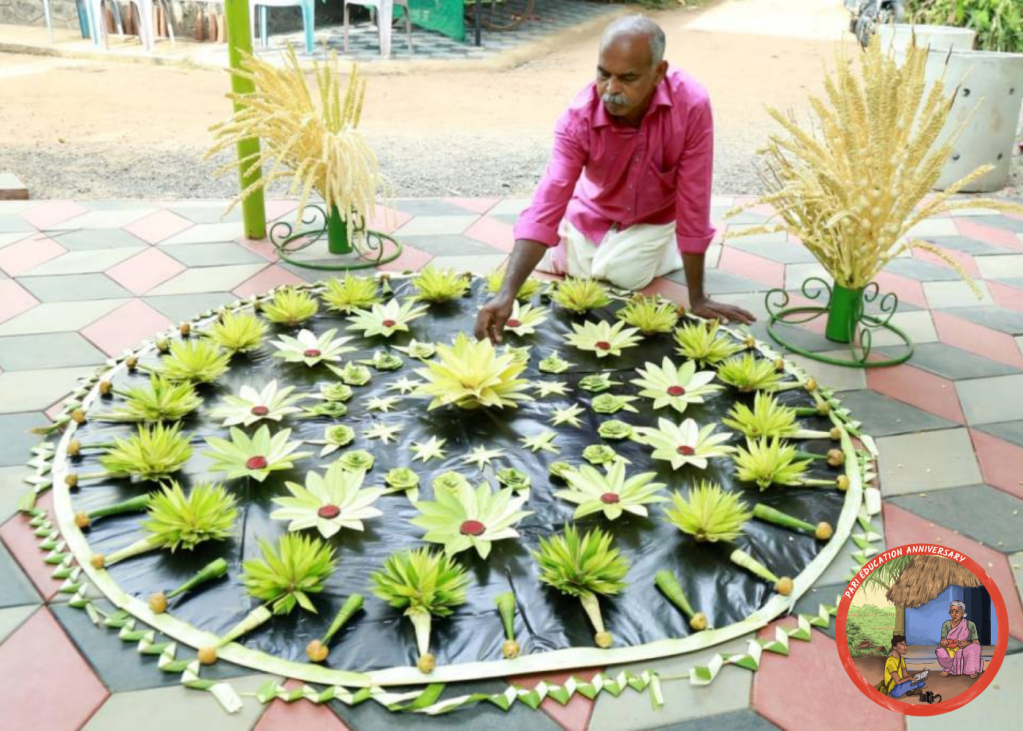 Narayanankutty can weave a fish from a coconut frond in less than five minutes; a flower pot takes him upto an hour and he needs even longer to make a lamp.

“In kuruthola, the most important part is shaving the coconut leaves and cutting them correctly. I use knives and scissors as my tools. Once the leaves are cut, it becomes easier to fold them into decorative pieces,” explains Narayanankutty. Using fresh, green coconut leaves, this 60-year-old artisan can create not just fish and flowerpots, but trumpets, stars, hats, snakes, decorative thorans, flowers, lamps and much more. “I have done decoration work for weddings, festivals and many cultural programmes, including the Kerala State Kalolsavam and the annual Thrissur temple festival,” he adds, speaking to us in his home in Cheroor in Kerala’s Thrissur district.

The intricate work required for a sunflower, pineapple or jackfruit model takes time and care, and Narayanankutty charges around Rs. 800 for each; for small parrots, he charges Rs. 50.

“To make a sunflower, first fold the coconut leaf along the eerkili (midrib) and cut the folded leaf into four-inch pieces. Cut a two centimeter circle from the midrib to make the stalk of the flower, then cut a slanting line from the bottom of the leaf to make the shape of a folded petal. Now unfold the leaf and the petal is ready.”

“To make a medium sized sunflower, you need to have 12 to 13 such petals. Insert these petals into the stem of a banana plant to get the complete look of the flower,” explains Narayanankutty, his hands deftly fashioning the fresh, malleable leaves.

Decoration projects are based on the customer’s budget. “These kuruthola items are eco-friendly and have a very short shelf-life – the freshly cut leaves start wilting and drying out in a few days, so I have to work fast,” he says.

“When I entered the field [in 1998], there was no one I knew that I could learn from. I just had memories of my childhood days when my friends and I used to make kuruthola toys. I didn’t have to invest a lot of money [starting out] as coconut leaves are readily available,” says Naryanankutty, weaving a fish as we speak.

“These kuruthola items are eco-friendly and have a very short shelf-life – the freshly cut leaves start wilting and drying out in a few days, so I have to work fast,” he says. Photos by Varsha Nair

Coconut trees dominate the cultural and geographical landscape of Kerala and it is referred to as ‘kalpavriksham’ in  Malayalam – meaning tree of heaven in English. All parts of the coconut tree – including its leaves, fruit, husk and trunk – are used. According to the Coconut Development Board (2011-12 statistics), the total area under coconut cultivation in India is around 20.39 lakh hectares, of which Kerala accounts for 7.66 lakh hectares.

“Almost everyone in Kerala knew how to make a figurine or a toy out of coconut leaves. But when other toys came [mostly plastic], people forgot about the kuruthola toys,” says Kanakam Gopinath, 74, an elder who has lived all her life in Villadom, Thrissur.

Narayanankuttty turned to kuruthola as a profession when he was around 40 years old. “I used to do electrical wiring work, but I was alone in the field after a few years; there were no helpers available. By the late 1990s, I quit my job as an electrician and decided to be self-employed,” he explains.

It took time and effort to establish himself and his art. Now at 61, Narayanankutty works under his own label – Navaneeth Kuruthola Alangaram  at home, which doubles up as his workshop. To popularise the craft, he teaches workshops on demand for children. He stays with his wife Vasantha Kumari and their sons, Vineeth and Naveen, who sometimes help out. “My sons are employed [elsewhere], and they don’t want to build their career in this field,” he says.

Narayanankutty has travelled to places as far off as Andhra Pradesh and closer to Coimbatore. “I looked for opportunities to display my craft. One of my first kuruthola decoration works was done at the Thenkulangara Kali temple in Mannumkad, Thrissur during the annual festival. It helped me gain recognition,” he says and points out photos of his work as he flips the pages of old albums. “More people started knowing me through my work, and I started to get more work. Wherever I would go, I would make kuruthola toys and give them to the children. I always made sure I had my tools on me,” he says.

Lockdowns and the ban on large gatherings has put a crimp in his kuruthola. “I hardly receive any orders now. [After Covid] there are no festivals or celebrations, and even if events are happening they are on a smaller scale,” says Narayanankutty.

Apart from the decline in orders, he is also finding it challenging to procure material due to lockdown restrictions. “Tender coconut leaves wilt quickly, so it is not possible to store my raw material. I buy based on the demand. Due to the lockdown restrictions, there is a lot of difficulty in procuring leaves,” he says. Sometimes Narayanankutty asks his customers to supply the coconut leaves. “If they can’t provide it, I get in touch with coconut tree climbers and cutters to find out where tender leaves are available,” he says.

When he has big decoration projects, Narayanankutty stays overnight at the venue. “Stage decoration for weddings takes a long time. I go to the venue the previous day and stay up all night to finish my work. On such days, I barely get two or three hours of sleep,” he says. The lack of sleep doesn’t bother him but, “my hands become stiff if I don’t have any work,” he adds, referring to the current situation.

Narayanankutty is part of the National Association for Malayalee Artists (NANMA), a state wide organisation headquartered in Kunnamkulam, Thrissur, “I heard that they were giving a thousand rupees to artists during the first  Covid wave. I haven’t received any monetary support yet. Everyone, including the government, wants artists, but no one helps us when we need it,” he says.

“I enjoy doing this work. I hope the pandemic gets over by this chingam (the first month of the Malayalam year that is considered a propitious month for weddings and coincides with August this year) and there is more demand for my work,” he signs off.

Varsha Nair is pursuing a Masters in media studies at the University of Hyderabad. She is interested in the handicrafts of Kerala and during her internship with PARI Education she chose to profile kuruthola.

She says: “I first met Narayanankutty at a temple festival in 2017. Talking to him for this story I was able to understand the nuances of the craft, the time and effort he puts into making each item. While reporting I saw up close the impact of the pandemic on artisans like him.”