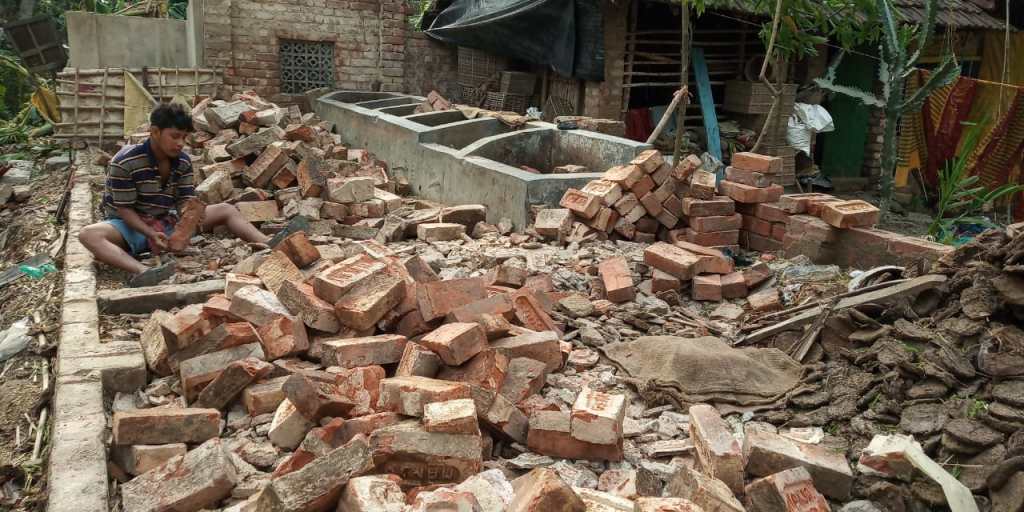 July 8, 2020
South 24 Paraganas, West Bengal
Agriculture, Climate crisis, Covid 19, Dalits, Things we do
Kankura village in the South 24 Parganas was completely destroyed by cyclone Amphan. Its residents, made up of subsistence farmers and daily wage labourers, already badly hit by the lockdown, are struggling to rebuild their homes and lives
Student reporter: Nikita Chatterjee

“From 5:30 p.m. to 6:00 p.m. there was a calm in our village Kankura. The wind and rain had stopped. I thought maybe the cyclone was over, but then the wind started up and it seemed to shift direction and gain speed,” says Sajal Kayal, 41, adding “The wind sounded very frightening – like high-pitched screaming. All the windows and doors started shaking and rattling as though someone was trying to break into our home. It went on for nine hours, through the night; we were very scared.

“My brother Kajil and I tried to keep our roof from flying away; my wife, mother and sister-in-law were trying to hold on to the windows, my 75-year-old father was trying to hold onto the door. We told the children [a five-year-old boy and a three-year-old girl] to hide inside. If we left the house we knew we would be killed in the cyclone.”

Despite Sajal and his family’s best efforts, the roof of their home blew away, the windows broke and rain flooded the house, bringing branches and insects inside. Amphan, categorised as a ‘Very Severe Cyclonic Storm’ made landfall in the coastal areas of West Bengal on May 20, 2020 with a wind speed of 140-150 kms and gusts up to 165 kms. The damage caused by Amphan in rural areas, particularly such regions as the Sundarbans, is hard to even estimate. Both North and South 24 Parganas took a heavy beating. State-wide, the death toll was at 98 as of May 29, 2020.

Eye of the Storm

Kankura is located in the South 24 Parganas district of West Bengal and was in the eye of cyclone Amphan, experiencing strong winds and torrential rains in its aftermath. “We have experienced cyclones in the past but nothing like this. In 2009, Cyclone Aila caused some trees to fall, but it was gone in three hours. The South 24 Parganas have never been in the eye of the storm. We generally expect the cyclone to go through Midnapore district and pass the Sundarbans into Bangladesh,” says Sajal.

Sajal was born in Kankura village and has lived here all his life. He says even his 75-year-old father, Sudarshan Kayal, doesn’t remember anything like Amphan, which raged through West Bengal on May 20, 2020 and is estimated (by the state) to have caused damage of over Rs. 1 lakh crore.

Every house in Kankura bears testimony to the ferocity of the cyclone that stormed through the village of  357 households and a population of 1,456 people. Most of Kankura’s residents – of whom 491 are listed as Dalits – own less than an acre of land and do subsistence farming. All their standing crops have been destroyed by the cyclone. Coconut, mango and palm trees that bring in additional income for the villagers, have been uprooted, adding to the overall losses.

The village is a source of labour for the pen, plastics and garment factories in the nearby Falta block. After the lockdown two months ago, the factories shut and the workers were back home in Kankura, completely dependent on their farming income.

“My moong dal (green gram) crop was destroyed. The plants had reached two feet and were ready for harvest. Now they are under water,” says Kokan Rai, 49. His entire six bighas (2.4 acres) of crop and farm land is submerged in water. Like others in the village, he also grew cauliflower, cabbage and paddy through the year, earning around Rs. 9,000 a month from their sale. “My mango trees are destroyed, and the roof of my house has collapsed. I do not know how I am going to manage.”

Laxmi Santra, 47, has had to move into a neighbour’s house. “My house is submerged in water and I am living in someone else’s home. My harvest is  ruined.” She cultivates paddy and green gram on her two bighas (0.8 acres) of land, which brings her around Rs. 25,000 a year. Laxmi works in a garment factory in the village where she used to earn around Rs. 7,000 a month before the lockdown shut all factories in the area. “I do not know what is there in the future for me.”

Mud houses with thatched roofs as well as cement houses have been damaged. Electricity lines were down and there was no power in the village when this reporter spoke to its residents on June 1, 2020. Locals estimate the cost of building a mud house will be Rs. 1 lakh and a home could go up to Rs. 4 lakhs.

“My house completely fell apart – the roof flew away and most of the walls are broken,” says Moumita Pramanik, 29, a primary school teacher at Tiyas School in Kankura village. Her  income of Rs. 2,000 per month has had to support her family of five since her husband Bilas Pramanik, 31, lost his job. “My husband worked in a pen factory three kilometers away, but due to the lockdown the factory is shut and he has no work. We were barely managing without his income of Rs. 5,500 per month, but now we have even lost our home.”

Moumita’s place of work – the primary school – has also been hit and a partition wall has come crashing down. She says, “The school had become a centre for ration distribution as part of Covid-19 relief. Luckily we had kept the rations inside so nothing was destroyed.” The teachers would come to the school to work on lesson plans that were then sent to students on WhatsApp. “Now that has stopped because of the cyclone,” she adds.

Factory workers are not the only ones struggling without incomes. “I am a cycle rickshaw puller and sometimes I do daily wage labour, but now I have no work and no income,” says Ganesh Mondal, 49, who was supporting his wife and five-year-old son on a monthly income of Rs. 6,000. Now Amphan has taken his house, “I have no way to pay for repairs,” he adds.

After the cyclone, the government distributed black plastic sheets to those whose homes had no walls or roof left. “I have put plastic sheets around my house so that we at least have some form of shelter. My roof somehow remained but the walls of my home were completely destroyed,” said Jasimuddin Meer, 34, who works in a garment factory.

With just one bigha (0.4 acre) of land now under water, Angur Bala Kayal, 55, is staring at utter ruin and poverty. “I am completely alone, my husband died 12 years ago, and I have nothing of my own. My house has blown away,” she says. Her entire crop of green gram and paddy has been flattened. She is hoping the one cow she owns will see her through the next few months.

People were evacuated to safer structures before the cyclone, but locals say as many 15 people have minor injuries from trying to save their homes. They are currently receiving treatment at the district hospital at Diamond Harbour, located around 13 kilometres from Kankura.

On May 23, after an aerial survey of the devastation, the central government announced a Rs. 1,000-crore relief package for the state. Sajal says, “We are trying to rebuild our village. It’s good that the Centre is providing these funds to the people of West Bengal. We are waiting for the funds to reach us.”

Nikita Chatterjee is a master's student of Development Studies at Azim Premji University, Bengaluru, where she attended a PARI session on 'Lives and Livelihoods in Rural India.' At home in Kolkata during the lockdown, she was a firsthand witness to the fury of cyclone Amphan and the devastation in Kankura. Writing about the cyclone allowed her to see the trajectory of a natural disaster and how communities, lives and livelihoods could be completely destroyed and yet carry on.