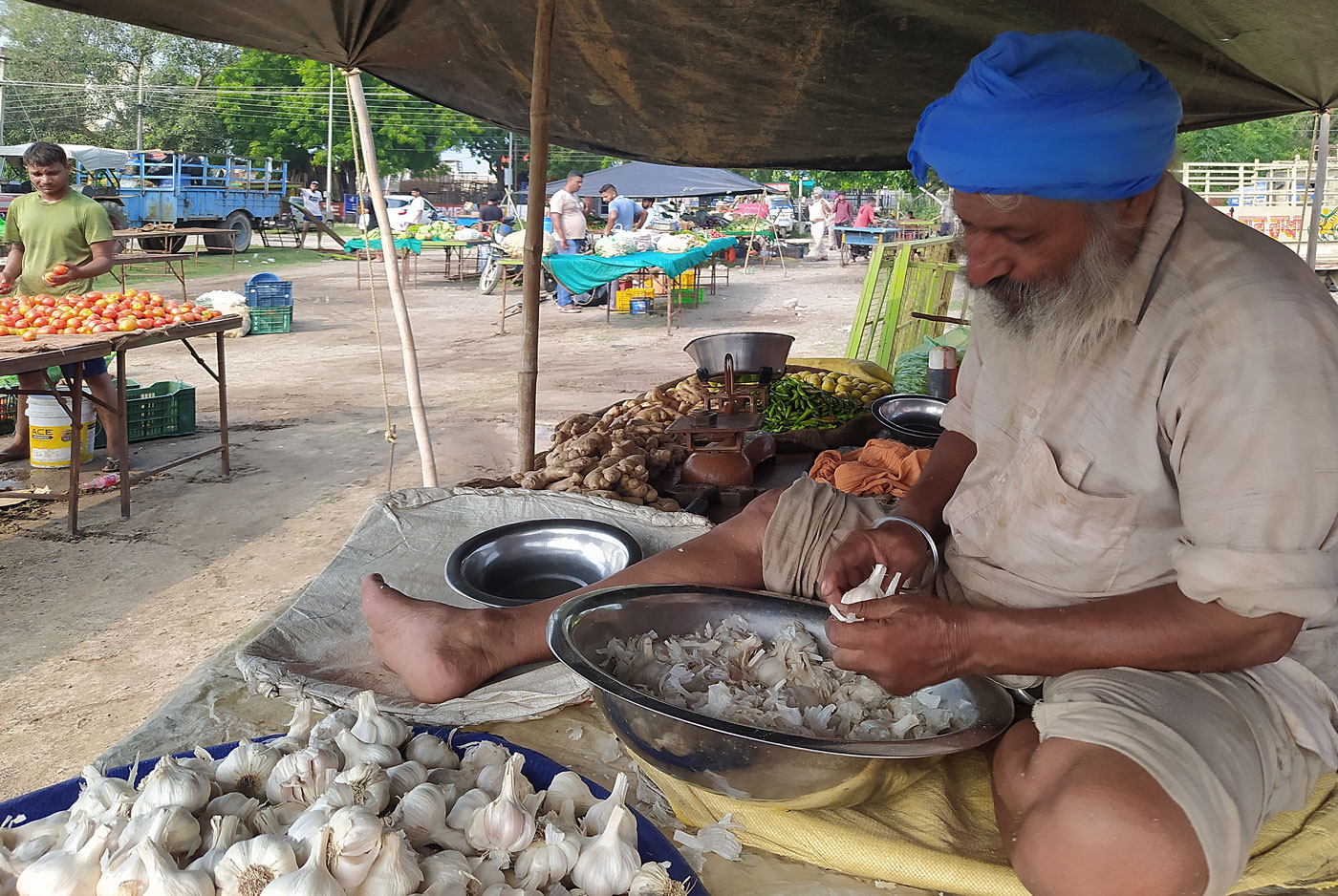 December 24, 2022
Patiala, Punjab
Things we do
A vegetable seller in the weekly markets round Patiala, Jarnail Singh nurtures a modest collection of coins and enjoys his annual pilgrimages in Punjab
Student reporter: Joyce Nalubanja and Balwinder Singh

Motorbikes, bicycles and pedestrian  traffic mingle as sellers and customers arrive and leave the weekly  market here in Patiala, Punjab. Held every Saturday, there are stalls loaded with  fruits, vegetables and spices, kitchen utensils, clothes and other household items. By midday, some are being set up while others are already up and running.

Sitting on a woven sisal mat with a black tarpaulin sheet for shelter from the sun, Jarnail Singh carefully measures out garlic bulbs on his weighing scale, after asking us how much we need. “Teeh rupey [thirty rupees]”, he says as he hands me our purchase of 250 grams as he looks for the next customer.

His stall has three varieties of garlic, each lying in its own heap: big cloves of pahadi garlic, medium-sized bulbs of the regular garlic and small pink cloves of desi (local) garlic. Two plastic bags of green chillies and a small display of limes and ginger take up the remaining space on his cart.

Vegetable seller Jarnail is also fond of collecting old coins and brings them out of an envelope in which he stores below the mats on his cart. “There is no particular reason,” he said when we asked him about his interest. Old one paisa, 10 paise, 25 paise and 50 paise coins, many of them showing their age dating back to the mid-20th to early 21st centuries.  Chief among his finds is a 50 paise coin last issued in 2011. He says it’s not the resale value of the coins but more of the connection they have with the past.

When he began working in the vegetable trade 29 years ago, Jarnail says, “I used to earn around 1,000 rupees a day.” Today it takes him three market days to earn the same amount as the number of sellers in the market has multiplied. When he first started, there were only about 20 to 30 sellers in the market and there are over 200 now.

“I used to lease five acres of land to grow the vegetables that I sold,” explains Jarnail of his early days. He paid an annual rent of Rs. 2,200 for the lease of the land. Together with his wife, they would plant wheat and paddy on one to three acres and vegetables on the rest. They also planted fodder which they sold to those who kept livestock. In 2006 he stopped leasing the land because of the heavy physical work that farming requires, and the rising costs of pesticide.

Jarnail’s children are grown up; his two daughters were married in 2006, and his sons in 2016 and 2018. His younger son stopped attending school after Class 10 and took up an apprenticeship with an electrician. He now has his own business and employs 10 people. Jarnail’s older son has a Masters in Music and teaches music at Mata Gujri College in Devigarh, 24 kilometres from Patiala, Punjab.

Jarnail Singh was born in Sonkra, a village in Nilokheri tehsil of Haryana’s Karnal district.  He does not remember the year of his birth and because he never got any formal education there is no document recording it. He says that according to the government-issued documents, the year of his birth is marked as 1969.

He lost his mother at the age of two and was left in the care of his father and five elder brothers. When he was around age 12 or 13, he started working in the fields with the landlords to help meet the family’s household expenses. When he was 16, Jarnail Singh along with his family migrated to Sanaur, Punjab on the advice of his maternal uncle.

Now in his fifties, Jarnail has done a number of different jobs. He used to change the hooves of black horses and was nicknamed  ‘Kali Ghodi Wala‘ (the one who keeps or takes care of the black mare). He says the name stuck and at that time when customers came to him, he would not charge them but rather ask them to take the money to the place of worship of whichever religion they followed. He felt that this was important. He later went on to drive a mule carriage and do construction work.

In 1978, Jarnail bought 200 square yards of land to build a house for his family.

On market days Jarnail wakes up at 4 a.m. and leaves his home in Sanaur for the market which is almost two hours away. His wife Sukhwinder Kaur helps him get the vegetables ready for the market. She recently slipped in the bathroom and broke her leg and now finds it difficult to walk. The couple, who were married 25 years ago, live with their sons and their wives who also help out.

Carrying roughly 100 kilos of garlic and other vegetables, he arrives at the market at 10 a.m. to prepare his stall. The market starts at 1 p.m. and he likes to be ready well in time. He brings a packed lunch and carries 10 litres of drinking water for the day.
As we are talking, a number of his fellow sellers approach him for a glass of chilled drinking water. He graciously offers us some as well; later he brings us cups of chai which he doesn’t allow us to pay for saying: “ਜਿੱਥੇ ਦਾਣੇ ਉੱਥੇ ਖਾਣੇ”, ਇਹ ਤਾਂ ਚਾਹ ਹੈ ਜੋ ਤੁਹਾਨੂੰ ਇੱਥੇ ਲੈ ਕੇ ਆਈ ਹੈ [Food invites you to places. It is the tea that called you here].”

Left: Jarnail carries medicines like paracetamol for anyone in the market who may need it. Right: He shuts shop at 10 p.m. and packs his goods in a basket to take them home. Photos by Joyce Nalubanja

Jarnail also carries medicines like paracetamol. “I carry with me some medicines in case I or anyone in the market needs them,” he says, showing us the tablets carefully packed in a plastic box.

As the dark of night approaches, Jarnail prepares to connect the three bulbs that light up his stall. He has paid Rs. 50 for the table that works as his stall and these lights. Besides this he must also pay Rs. 20 to access the grounds as a seller.

By 10 p.m. it is closing time and Jarnail packs up whatever is left of the garlic, green chillies, limes and ginger. He also packs up his basket in which he keeps his medicines and other personal effects. His coins are kept in an envelope that he stows among his things. His eldest son then joins to help push the bicycle cart laden with the remaining goods as they head home.

Joyce and Balwinder are pursuing a Masters in Journalism and Mass Communication at Punjabi University, Patiala. They participated in a PARI workshop at the Educational Multimedia Research Centre (EMRC) in the university in August 2022.

Joyce says, “I was drawn to this particular seller in the market because of his age and the fact that he had already set up at that particular time. Later I realised that he has this unique coin collection.”