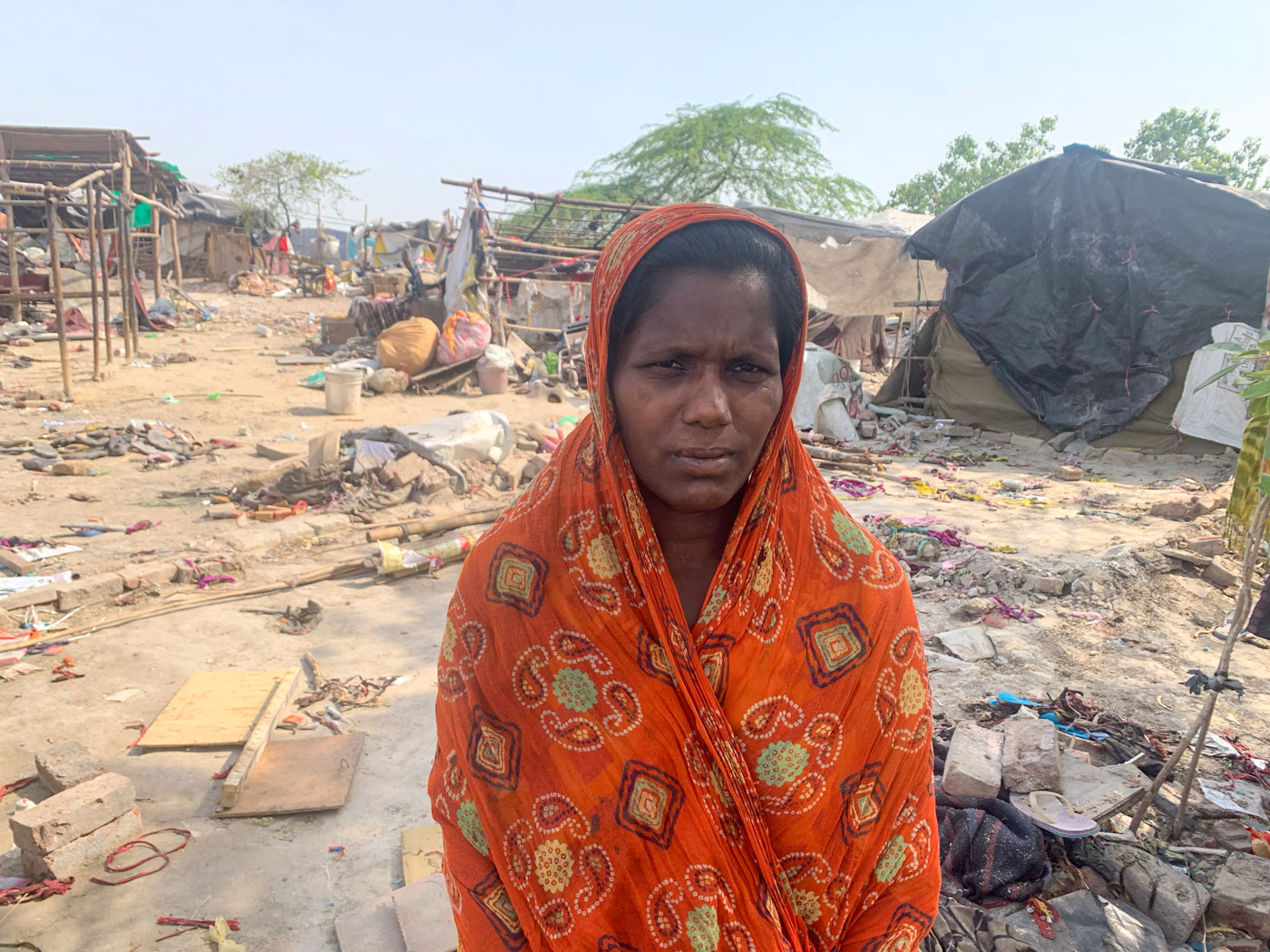 When the residents of Old Usmanpur hear the rumble of a bulldozer, they know it’s a sign they will have to urgently move. The colony of waste pickers, rickshaw drivers, scrap dealers and beggars live under the constant fear of suddenly and without notice, losing their jhuggis (makeshift homes). They say in the last decade they have seen their homes go under multiple times.

“Shifting our jhuggis has become a way of life,” says Raghu (name changed), a member of the Sapera community here. Sapera are a denotified tribe but have not been able to access any welfare schemes.

Mere metres from the banks of the Yamuna river, Old Usmanpur village is part of the river’s floodplain. In 2010, the Delhi Development Authority earmarked the area occupied by this village as  Zone ‘O’ –  for rejuvenation of the highly polluted Yamuna. The river travels 22 kilometres through Delhi and the DDA plan is to create recreational areas on the waterfront.

The  National Green Tribunal (NGT) in 2014 prohibited construction and developmental activities in the floodplain. Since then, civic authorities routinely carry out anti-encroachment drives and demolitions. Often without notice to the people who live there.  “They [civic authorities] don’t say anything. There is no conversation or dialogue. They just come and demolish and tell us that it’s government land,” says Raghu speaking about the frequent demolitions.

The sudden destruction of their homes and belongings could mean days and months with no shelter. “In 2020, when they demolished our jhuggis, we spent months in the cold, unable to stop shivering. Especially the older people among us really suffered. Five families would try and stay warm around one fire,” says Rubeena (she only uses her first name).

A resident of Old Usmanpur, she has spent all her life here in the Bengali section of the settlement. She came here when she was a year old with her parents who migrated from West Bengal. She says every time a demolition happens, “We endure it and [have to ] rebuild our homes.”

As most of the residents work for daily wages, the days spent guarding their possessions and waiting indefinitely for the sweep to begin is a loss of income. “The main occupation of our people is kabaadi [waste picking], begging and pulling rickshaws. There are so many days where we don’t earn anything at all. How will we pay the rent?” asks Rubeena. She says rents in the area can be as high as Rs. 4,000 and there is no state-subsidised housing alternative for the residents.

In May 2022, the residents of Old Usmanpur heard on the local grapevine that there would be a big demolition drive on 6th and 7th June. They say there was no official communication.

“We heard that if we do not move, they [authorities] will destroy everything,” says Rubeena. She worries about her school-going children who study in the nearby government school, Nagar Nigam Pratibha Vidyalaya. Shifting location and getting admission in another school during the school year will be difficult and may cause them to drop out. “How do we raise our children?” she asks.

Nanni Devi has lived in Old Usmanpur village for almost her entire life. She says rebuilding their broken homes uses up money they don’t have. “If people don’t even have food to eat, how can we afford a rented place? Where will we get the money for rent? People are either begging or picking garbage to get food,” she points out.

The 68-year-old resident remembers a time when there were fields all around and wheat was cultivated in plenty. Farmers also sold vegetables grown here. “The land didn’t look like this earlier. You would have found crops all around,” she says.

The NGT ban on farming was followed by anti-encroachment drives which have increased in the last two and a half years.  “Everyone’s land was taken at different times. Our area was demolished in 2021,” she adds.

Nanni Devi rues the loss of carefully cultivated trees saying, “When a demolition happens, it destroys the trees as well. They [demolishers] don’t leave anything. We had many trees of jamun, mango and banana. I had grown them with so much effort.”

Raghu says the Sapera community he belongs to are largely labourers and scrap dealers. “Our ancestors were always on the move. We have no ancestral land.” Like the others here he says if the government gave them some land, they could make permanent homes. Nanni Devi agrees and adds, “They [government] should give us some land so that we can provide for our children here, and have a place to live”. “We are not getting the help we require. They have taken away farming from us, at least let us live.”

Eeshna Gupta has just finished an undergraduate course in Social Studies at Krea University, Sri City, Andhra Pradesh. She wanted to work on this story as she says that the everyday reality of people in slum settlements, unauthorised colonies and jhuggi jhopri clusters are not heard in the context of cities like Delhi in mainstream media.

She says: “My learning with PARI has been that stakeholders speak from different perspectives. However, when a story is grounded in the viewpoint of those who are directly affected, it brings back the focus to a voice which is repeatedly neglected amidst surrounding technicalities. This is a practice that I am taking back with me, regardless of my domain of work.”