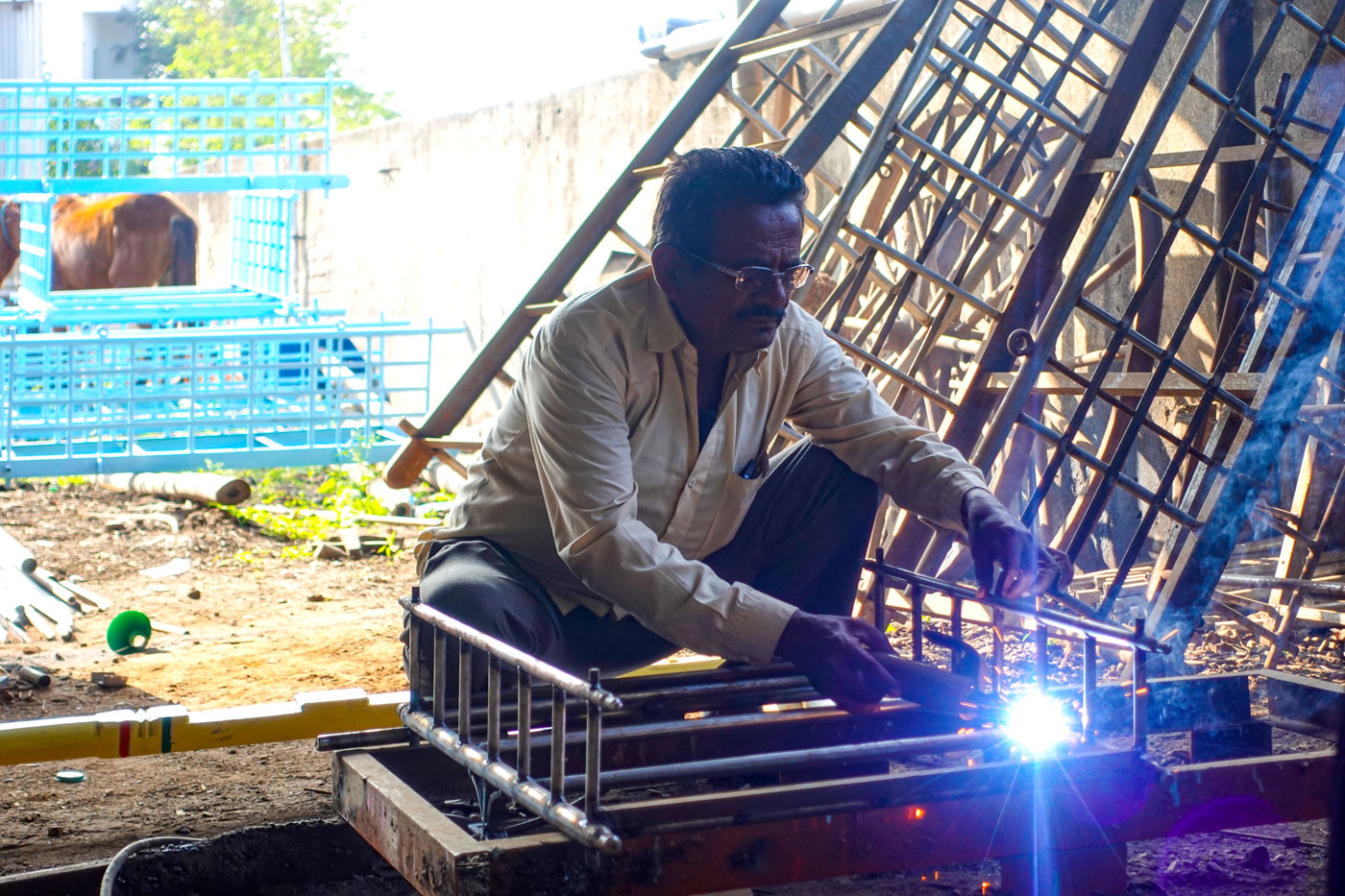 January 19, 2023
Nandre, Sangli district, Maharashtra
Agriculture, Photo stories, Things we do, Things we make
Chandrakant Patil has been making bullock carts with metal wheels for over three decades now. They are used for farming and in bailgada races here in Maharashtra
Student reporter: Atul Ashok Howale

This story was originally reported and written in Marathi. Contributors from across India report, write and illustrate for us in a language of their choice.

“I am known as Chandu mistry.”

Chandrakant Patil says he owes his title to the metal-wheel bullock carts he has been making for over three decades. “In 1985, I was working as a welder in a private company. I thought why not create a metal cart?” he recalls.

Today, he can finish one cart in two days. But earlier, when he had just started, it would take him a minimum of five to seven days to finish one cart. His 35 year-old son Suhas Patil has been helping him since he was sixteen.

Since then, his initial design of a metal cart has also undergone many changes.

The traditional wooden carts used in the 80s were heavier and a lot of weight for the bulls. Chandrakant thought the lighter metal carts would be welcomed by farmers.

Chandrakant stays in Nandre, a village 14 kilometers from Sangli. Initially it was difficult for him to get materials to make a cart.

The building of a bullock cart calls for many parts: metal pipes, metal angles, channel, a wooden ‘joo’ that rests on the neck of the bullocks, wooden poles, shafts, rubber from used tyres and chivtyaa or bamboo. “I could not get the rubber then in Sangli and so used to get it from Katraj in Pune,” he adds.

Now raw materials are available in Sangli but prices have gone up. “The rubber used to cost 12 rupees a  piece. Today it costs 250 rupees. The ‘chivati’ was 35 rupees a piece and it is now 600,” he says. “The rising input prices are a big hurdle. I have to keep the selling price low so that the farmers can afford to buy the carts,” he adds.

Metal carts have become popular in bailgada races. Wooden carts used to injure the animals and sometimes the wheels would break mid-way. This doesn’t happen with metal ones.

In 2021, the Supreme Court lifted the 2017 ban on bailgada races. This was a relief for cart makers like Chandrakant, who says, “I have been making these carts for more than 35 years now, and will continue to serve the farmers in the future.”

PARI Education would like to thank Medha Kale, PARI’s Marathi Translations Editor for her help with this story.

He says that he wanted to document Chandrakant Patil’s work because, “Even now, bullock carts are important for farmers in Maharashtra.”