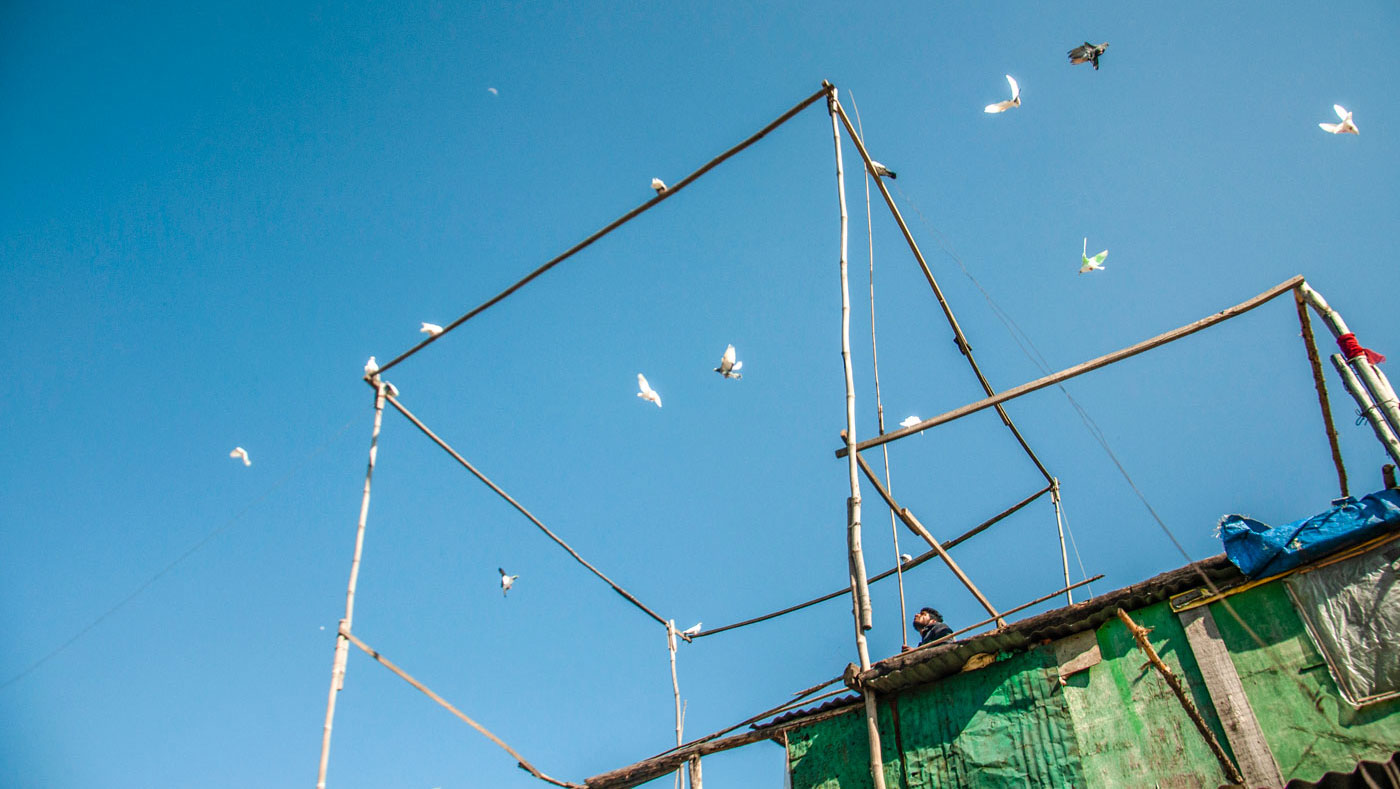 October 14, 2021
Srinagar, Kashmir
Things we do
In Kashmir valley, the arrival of summer marks the season of pigeon racing – a sport that is gaining popularity once again
Student reporter: Mir Yasir Mukhtar

Shabir Ahmad is preparing for a test flight.

It is springtime and light clouds drift across the clear blue April skies in Srinagar – the summer capital of Jammu and Kashmir. The 35-year-old government employee is on the terrace of his three-storeyed house in Srinagar’s Solina locality. Shabir, a pigeon fancier (kotarbaaz in Kashmiri language), is preparing for the flight of the pigeons he has bred.

“They don’t like grey skies. They have been inside since November as the winter here is harsh,” he says. As the birds emerge from the coop, some settle down outside on a network of bamboo rods. Shabir then holds a slender bamboo stick, around 8 to 10 feet in length, and runs it along the horizontal poles. He strikes the pole gently yet swiftly a few times, nearly touching the coral claws of the resting birds who will soon take their first flight of the season.

As Shabir speaks, one of the pigeons flies up towards a silver cloud. A hovering falcon swoops down for a chase. Shabir watches and whistles. The pigeon is far away with the falcon chasing it, but he continues whistling. “The whistle is an alarm that the bird understands. The higher the pigeon flies, the greater the danger of it being attacked by falcons and eagles,” he explains. Quietly, we watch as the pigeon – one of the 400 or more birds that Shabir owns – returns to take its place close to us.

Resting in his wooden loft are pigeons of different hues and varieties. “Some breeds have Kashmiri names and some are names I have given: Kalewozul, Zaag Cheen, Doub, Teddy, Zira, Saharanpuri…” Shabir rattles off the names as he unlocks the door to the loft and opens a sack full of maize. They are fed twice a day, at dawn and at dusk. A bucket of water is kept inside the coop and refilled often.

A kotarbaaz like Shabir could end up spending between Rs. 5,000 and 10,000 a month on the upkeep of his birds. He adds dry fruits, uncooked chickpeas, mustard seed oil and protein-rich supplements to their diet to build up the strength they need to race.

Mohammad Salman is a pigeon fancier and a street vendor in Dalgate area of Srinagar. His family has been keeping birds since the late 1980s. He says that consistent effort is required to raise winners. “It takes about six months to prepare for the season,” says Mohammad. “It starts with pigeons hatching their eggs while they are kept warm in the coop in the peak of winter. Every year, I have nearly 100 baby pigeons but not all of them are suitable for racing.” The pigeons are picked based on the flying tests that precede the season.

Pigeons have the ability to fly for several hours before returning home. The process of familiarising them – known as ‘homing’ – takes around 40 days, says Mohammad. It enables them to safely return to him and not fly away. The use of pigeons as carriers of messages, and their role in the military, are trivia that fanciers like Mohammad know well. In World War I, pigeons were used by the German military on reconnaissance missions, with cameras strapped to their bellies, their ability to fly high, and for hours, giving them an advantage.

Noted Kashmiri poet and historian Zareef Ahmad Zareef, who is in his 70s, has followed pigeon racing culture for decades. He says: “We [Kashmiris] kept pigeons as a hobby and sport. Thirty years ago, there used to be at least three to four fanciers in each mohalla [neighbourhood]. Kashmiris adapted this sport from Punjab.” There was a time when every Friday morning, around 50 pigeon fanciers from all over the valley would come together at Kak Mohalla in the city’s Nowhatta locality, and barter or sell captured pigeons in the market, he says.

Shabir was introduced to the sport by his older brother, Fayaz Ahmad, who stopped visiting the coop once he got married. Zareef explains why: “People hesitate to get young women married to pigeon fanciers as the latter could fall from the roofs of their houses while [excitedly] watching the pigeons in flight. This sport was not always approved by society.”

Glancing up at the sky, Shabir spots a Kalewozul – a red-headed white pigeon, a much sought-after breed. “It belongs to some other fancier,” he says. The pigeon lowers itself a little and, minutes later, tired, it arrives and sits on one of the rods near Shabir’s coop. Shabir is alert to the opportunity, and takes the stick close to the bird. He whirls a loose knot, like a noose, onto its neck and then urges the bird into his coop. Finders keepers! The pigeon now belongs to him. This is considered normal in Kashmir’s pigeon-keeping circles. While some fanciers are open to this practice, there are others who are only interested in the upkeep of their own birds.

There are other ways fanciers could lose their birds. When his pigeons return for the day, Shabir notices that one is missing. “Sometimes, they come back the next day, injured,” he says, hopefully. Some of his best pigeons have been lost to predators. “This is a part of our testing process. The birds must learn to take care of themselves.”

Off to the races: beware a red card!

The earliest races were akin to being a one-bird sport in Kashmir, popular when militancy was at its peak and people were confined to their homes. Fanciers would tame pigeons and there would be rivalry between various breeders and small-time racers. “At dawn, a set of fanciers in a locality would set their pigeons free and note the time of their return. The pigeon with the highest number of flight-hours would be declared the winner,” says Shabir.

Today, pigeon racing is a high-stakes sport and some races have hefty cash awards of up to Rs. 30,000 or even Maruti cars.

It was social media, particularly YouTube videos uploaded by Pakistani fanciers, that led to the recent resurgence of interest in pigeon fancying. “Pakistani fanciers are a source of inspiration, and social media has made their style accessible to us,” observes Shabir, scrolling through the most-watched pigeon fancying videos on YouTube on his phone. In Pakistan, unlike Kashmir, the weather permits racing all year round and videos of tournaments are posted online.

“This way [with videos], the race is not limited to a certain area but can be held between fanciers based in different parts of Kashmir,” says Aftab Ahmad, a Solina-based kotarbaaz who has also been a judge since 2019. “Judges are selected from amongst us fanciers,” he adds. They set dates for the fanciers to each fly their five best pigeons, and go to each coop at dawn, watch the five chosen pigeons soaring in the sky, and record their collective flying time.

Before a flight, the judge attaches stamps on the feathers of the selected pigeons, and then watches the flights through binoculars until the pigeons return. Sometimes, during the races, fanciers fly other pigeons that are not participating in the race. These pigeons are meant to distract predators with their presence, so that the threat to the racer pigeons is reduced. “This is allowed by judges,” says Aftab. “If a racer pigeon gets hunted or wounded, it is terminated from the race and not replaced. It is like a red card in football.”

With new fanciers competing, the pigeon racing culture is expanding every year. Held on multiple rooftops simultaneously, the frequency of races peaks in June. While there is no hard data that tracks these numbers, fanciers indicate it is likely to be in the range of 70 such races every year, with roughly a third of all fanciers taking part in any race.

It has been 17 years since Shabir first held his older brother’s hand to be led to the coop in their house in Srinagar’s Old City. “I got emotionally attached to the birds. It is like parenthood – you feed them, see them hatch eggs and watch young pigeons learn to fly. And when a predator leaves them injured, you nurse them back to health,” says Shabir.

“Real bird lovers raise them as a hobby or for entertainment,” says Mohammad of his brood. “I once won 5,000 rupees as a gift of appreciation from my fancier friends, along with a trophy. But in my case, it has never been about the money.” He carefully latches the door of his coop once the last bird is safely inside. “To me, they are like my children.”

Mir Yasir Mukhtar has just completed his bachelor’s degree in Mass Communication and Journalism at the Government College for Women, Srinagar, Kashmir and aims to become a photojournalist. He says, “While researching this subject, I learnt about everything that goes into making these birds race-ready. I wanted to bring forth this story about the subculture of pigeon-fancying in a place where it was considered taboo not too long ago. I chose this subject because I have a keen interest in exploring how Kashmiris pursue their passions while living through unrest and conflict in the area.”