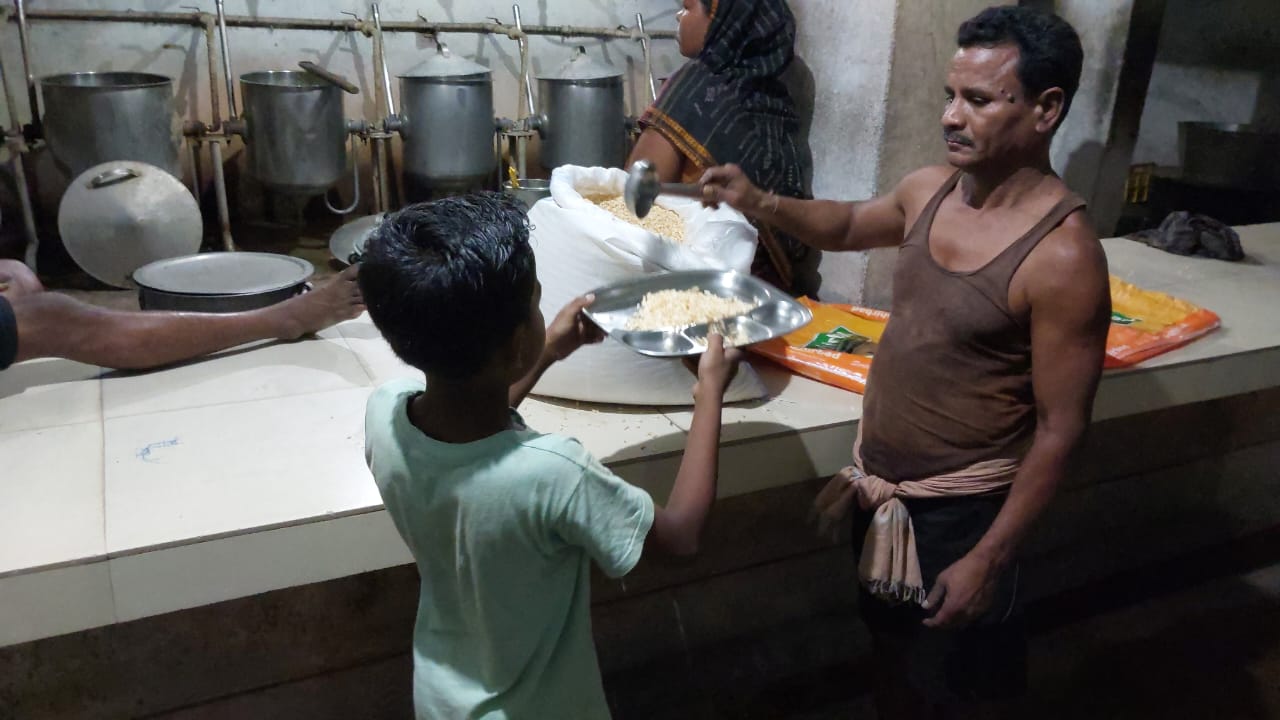 January 5, 2023
Kankia, Kukudakhandi block, Ganjam district, Odisha
Shorts, Things we do
Sahadeba never wanted to go to school. But today he’s back in one – cooking over 500 meals three times a day as the cook at a high school in Ganjam district
Student reporter: Dipti Raita

My name is Sahadeba Kanta and I am 60 years old. I work as a cook at Gram Vikas High School in Kankia. There I manage the kitchen and cook food for over 500 people three times a day. I learned how to cook as a child; whenever anyone around me was cooking, I would sit next to them and watch.

Seeing children at the school makes me happy. During the holidays, seeing no children around makes me feel sad. I love the children as if they were my own, and they reciprocate the same feelings of love and respect.

Some years ago I lost both my adult sons. The elder one was set to marry, but suddenly died of an illness. My younger son got married at the age of 20, but two months later, he also passed away. After his death, my daughter-in-law ran away. I heard that she had sold my infant grandson, Benkat Kanta to a wealthy family. Sometime later, I heard that she had passed away.

I spent 15,000 rupees to find my infant grandson who had been sold off. I was determined to find him and bring him back. He is now five years old and lives with my wife and me. I want him to grow up well and take care of us in our old age.

When I was young, I was put into a local school by my parents in Chhata, Komna taluk which comes under Nuapada district. But I stopped going to school after the first two days because I was scared of getting scolded by my teachers. I used to run away to the jungle when they [teachers] would visit my home to persuade me to come back. I used to hide from them! I was a naughty child; my uncle was the sarpanch so I thought I could get away with anything!

When I stopped going to school, I was beaten up and not given anything to eat for a day. Later I would spend my time with my friends, and we would steal mangoes from the trees, roam the jungle, graze cows and buffaloes and play kabaddi and other games with my friends.

After dropping out, I started grazing our cattle. I was around 15 years old by then.  We also had 20 buffalos, 20 cows and 10 goats. I used to go to graze the cows every single day. Whether it was summer, monsoon or winter, I would spend months inside the jungles with my animals.

Later, I worked in our fields – we had four acres.  There was no electricity at our house and we faced difficulties at night. We had no access to drinking water as we are far away from any big village – Komna is 12 kilometres away.  With a lot of hard work, my father, mother and I dug up a well on our land. We used the water from the well for drinking and cooking purposes.We thought it would help our fields.

My father’s name was Dasuru Kanta and my mother’s name was Tulse Kanta. I have five brothers and three sisters. All of us worked as daily wage agricultural labourers.

At the age of 20, I married my wife, Ratna Kanta. We had two sons and one daughter. The elder son was named Prasanna Kanta, and the younger one was called Pruthviraj Kanta. My daughter’s name is Upasi Kanta and she was married at 20. Her daughter, i.e. my granddaughter, is named Priti Kreti.

I drop my grandson off at my elder brother’s place and go off to work. I have been working at this school for the past seven years now and earn Rs. 10,000 per month. All the money goes into running my house. I helped my brother’s daughter get married and gave  50,000 rupees.

I planned to work for four more years and then stay back at my home to rest for the remaining years of my life. But given the financial needs at home, my sir at the school has suggested I continue working. I will work as a cook for the rest of my days.

PARI Education would like to thank Sharbani Chattoraj, Manager Innovation and Strategy, Gram Vikas Residential Schools, Odisha for her help and support in bringing out this story.

Dipti Raita is a Class 9 student of Gram Vikas High School, Kankia in Kukudakhandi block of Ganjam district in Odisha.

She attended a workshop on journalism in Mohuda, Odisha, conducted in March 2022 by People’s Archive of Rural India (PARI).  She says: “I stay in a residential school and one day I saw Kanta and I was drawn to him and decided to choose him as my subject for my first reporting assignment.”