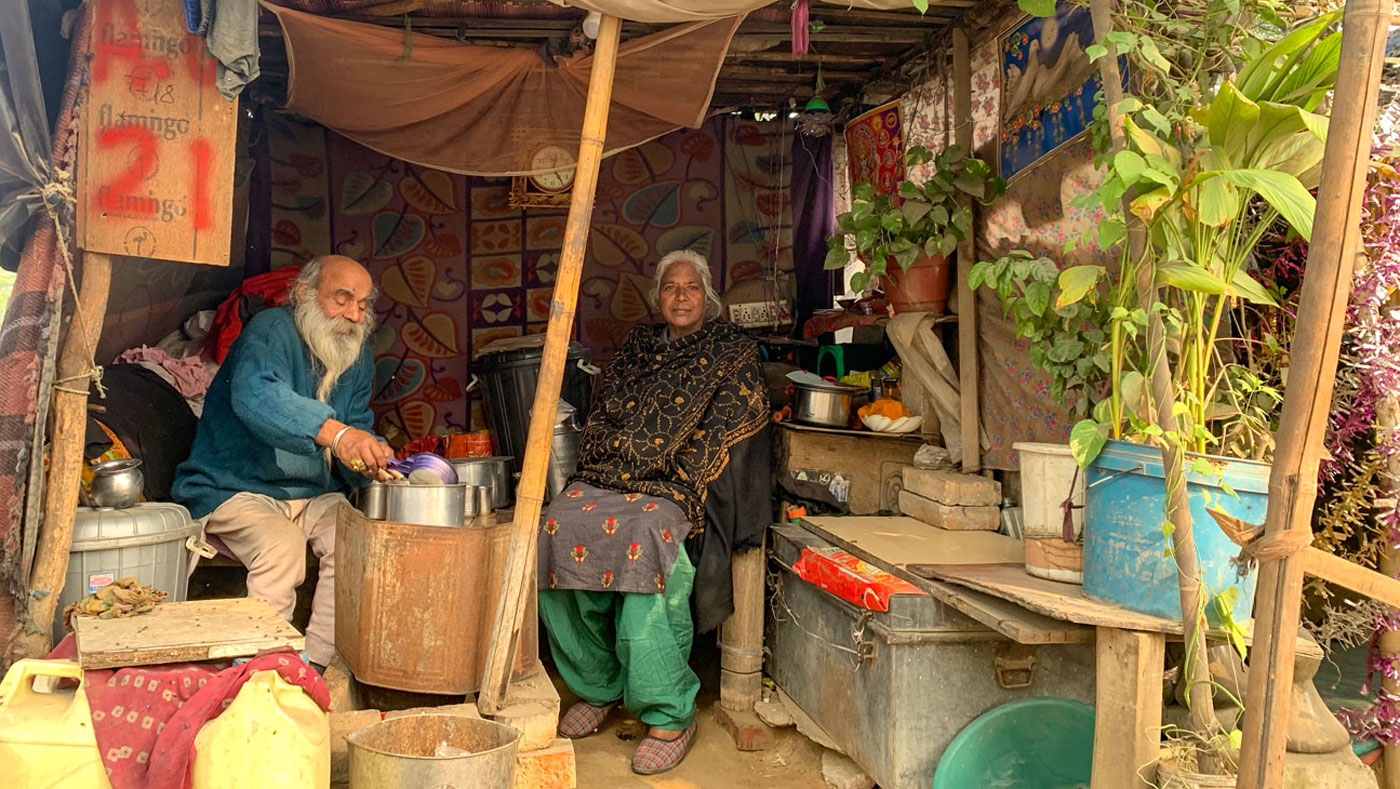 July 21, 2022
New Delhi
Gender, Migrants, Things we do
The story of the elderly couple, Jhanki and Ramkumar, who ended up on the streets of Delhi, gives a closer look at the everyday lives of people on the margins
Student reporter: Geetanjali Sharma

But there is little that is normal about Ramkumar and Jhanki’s married life or life in general.

For more than 10 years now, Jhanki (she uses only this name) has been living in a shelter for the homeless in Lodhi Colony in New Delhi. Her husband, Ramkumar lives 14 kilometres away in a makeshift hut near the Prem Nagar bus stand in Delhi’s Tughlakabad area.

It’s not a marital arrangement of choice for this couple now in their sixties, but one they have been forced to accept and looks unlikely to change.

Jhanki and Ramkumar met in 1993 when she was a medical attendant at the Gujarmal Modi Hospital in Saket, New Delhi. “He [Ramkumar] had a nice, strong character,” she says, recalling what drew her to the man who had migrated from Uttar Pradesh’s Faizabad district (recently renamed Ayodhya district). Her parents were opposed to her marriage as they belonged to a higher caste and Ramkumar was not. The family of eight – two brothers and four sisters – and her parents were then living in Shastri Park in Delhi.

“We got married in an Arya Samaj mandir [temple] and started living in a servants’ quarter on rent; We paid 400 rupees as monthly rent,” she said. Ramkumar ran a tea stall in a parking lot near their home in R.K. Puram’s Sector 8. Their daughter Radha was born two years later, in 1995.

Shortly after, Ramkumar began to get repeated threats from the local municipal committee to shift his stall out of the area. “His tea stall was removed many times by local authorities. They said he was encroaching on public space,” she says.

So in 1997, the couple and their infant daughter shifted to Faridabad’s Mewla Maharajpur area in Sector 31. Ramkumar worked as a kabadiwala (scrap dealer) in industrial godowns in the area. They stayed in a single-room jhuggi (makeshift accommodation), paying around Rs. 600 as monthly rent. Ramkumar’s earnings of roughly Rs. 2,000 a month kept them afloat.

In 2005, Ramkumar fell ill, coughing up blood and unable to do hard labour. He was treated at a government hospital in Faridabad, and switched to the less strenuous job of a watchman at the same factory. Two years later, his health further declined – his vision became blurry and his sugar levels went up. He lost his job, and the meagre income that supported them vanished overnight.

“There was no income. We couldn’t pay the rent. We moved to the footpath and started begging,” she says. A year later, Jhanki was arrested for begging under the Bombay Prevention of Begging Act 1959, also known as the Delhi Prevention of Begging Act 1960, which states that “any police officer or other person authorized in this behalf may arrest without warrant any person who is found begging”.

Recalling the moment in 2008 it happened, she says: “It was a Tuesday, and I had gone to a temple in Connaught Place [in New Delhi] to collect alms. I was picked up [by the police] along with another elderly woman, and we were taken to the home for beggars in Sewa Kutir. For two rupees worth of begging.”

There were around 30-35 women already lodged there, at Kingsway Camp, referred to as a ‘receiving centre’ – one of 11 institutions for detaining beggars, according to the website of Delhi government’s department of social welfare.

At these centres, people like Jhanki must wear uniforms and are required to help out with cleaning, cooking, and even gardening. “[At the centre] you must work as punishment,” she explains about her time there.

Although she was treated well, Jhanki says her stay there did not help her with options to move away from begging and sustain herself. “We were taught nothing. There was no personal progress,” she adds. The website, however, says “…inmates receive vocational training to seek gainful employment in the society after they are released.”

Months later, Jhanki remembers, the magistrate at the Karkardooma district court in Shahdara, east Delhi, asked her, “Why do you beg?”

“No one begs out of choice,” Jhanki replied. “I was doing it to educate my daughter.” Radha, her daughter, was enrolled in a government high school in Faridabad when Jhanki was arrested.

Since Jhanki was a first-time offender, bail was set at Rs. 10,000. She remembers telling the officers, “What is the point of this [high amount]?” as she could not afford it. Even if she could, to avail bail one needs official identification documents like a ration card, Aadhaar and so on, and Jhanki possessed none of those since she had no permanent address.

“I used to cry,” Jhanki says, the pain of that time hurting even today. “Probably that was why I was released early.” On August 15, 2009, after spending almost a year and a half in Sewa Kutir, Jhanki was released and was told by the caretakers, “don’t come again”.

Her detention in the receiving centre caused Jhanki to miss an important event: “When I came out, I learnt that my daughter was married.” Just after Radha had finished Class 8, Ramkumar had arranged her marriage to a much older man. “I was shocked. Despite having a daughter, I wasn’t able to give her away,” she says, in tears at the memory of her underage daughter being married off and missing the occasion.

It’s 6 a.m. and Jhanki gets herself out of her warm bed and rushes to the nearby public toilet at the shelter for homeless people where she now lives. “I have to be very quick. We get lukewarm water, and I haven’t washed my hair in more than a week,” she says.

In 2009, after being released from Sewa Kutir, Jhanki and Ramkumar went back to living on the pavement for some months. They moved to a shelter for homeless people – separate ones for women and men – run by a local non-governmental organisation. The shelters used to be a cloth tent and Ramkumar found it difficult to live there. “When it rained, the cloth-covered shelters would flood and mud would flow inside. Everyone would then shift to the Sai Baba temple nearby,” said Jhanki.

Five years ago, the shelter acquired a tin roof and concrete floor, but Ramkumar had already moved out by then. “For three years [2014-17] I sat outside the Sai Baba temple and begged,” says Ramkumar. He needed around Rs. 2,000 for a cataract operation and only quit begging once he had collected it.

Their desperate financial condition forced Ramkumar to look for work. “What will I do here? [homeless shelter]. We cannot both survive like this,” he told her. Ramkumar returned to Faridabad to look for work. “We thought even if we can’t pay rent, we could at least earn enough to feed ourselves,” Jhanki says.

Work opportunities were not easy to come by for the now older Ramkumar who could no longer do hard labour or work in Faridabad’s factories. He even found the jerks and bumps of public buses hard to bear and so stopped travelling anywhere. Instead, he set up a tea stall again, near his makeshift hut at Prem Nagar bus stand. He says he manages to earn around Rs. 50-100 a day.

Some of those earnings Ramkumar gives Jhanki. Their daughter also helps out and Jhanki manages on Rs. 200-500 a month for her expenses. She uses the money to buy a small gas cylinder that lasts about 20 days. “If I use it every day, it will run out in 10 days,” she says. She depends on the free rotis, tea, and at least one meal from the shelter home to subsidise her living expenses.

Her case is not unusual – only 11 per cent of elderly women (aged 60 and above) in urban India are economically independent, says a report, Elderly in India 2021. In fact, 70 per cent of all elderly people in India are dependent on others for their daily living.

Once a month, Jhanki sets off on a journey to meet her husband. It takes her an hour and she must change at least two buses to reach. When she reaches, Ramkumar dials their daughter Radha from his phone. She gets a 30-minute lunch break at the leather factory where she works. Watching the clock, Jhanki manages to speak to her. “I don’t visit her or interfere in her life. I only go when I am invited [to Radha’s home],” she says.

Ramkumar owns a phone and speaks to Radha almost every day; they even meet occasionally as she both lives and works not too far away. However, Jhanki can only call using the caretaker’s phone at the shelter home. During the lockdown, she didn’t see her daughter for 10 months and the separation from her family has affected her mental health, she says.

A few years ago, Jhanki was among four women who were offered permanent stay at an ashram in Delhi, but she declined the offer. “Those ashrams are for people who have nobody. I have my husband and my daughter, why would I go?” She says going there would take her further away from her family who she is still able to meet from time to time.

Jhanki is acutely aware that she may never live with her husband under the same roof again. “We won’t be able to afford the rent,” she states matter-of-factly. “My husband and I live apart, but our lives are continuing and we are able to take care of ourselves. This is a big deal, to not be dependent on anyone,” she adds.

In December 2021, Jhanki had almost completed the paperwork for an Aadhaar and ration card; she had also received both her Covid vaccinations. Happy that her documentation was underway, she lost no time in helping other women at the shelter get their papers in order. “They don’t know where and how things are done. It is my duty to help,” she says.

As I leave, she tells me she will be going to Delhi Gate to help a resident with her medical documents. “We [women] live together and so we don’t feel lonely. Whatever happens to us, we share it with each other and feel comforted. We are just passing the time here, living out our lives,” she said.

The author would like to thank Pia Kaul for her assistance during the writing of this article.

Geetanjali Sharma has recently completed a postgraduate degree in Sociology, Anthropology and Media Studies at Ashoka University, Sonepat. She was keen to understand the impact of urban poverty on Delhi’s homeless people. This story emerged from her internship with PARI Education in 2021. She says, “I was humbled by Jhanki’s willingness to share her story with me. Through our conversations I understood the lack of recognition given to homeless people in our country. The anti-poor legislation criminalises them for even trying to sustain themselves through begging.”