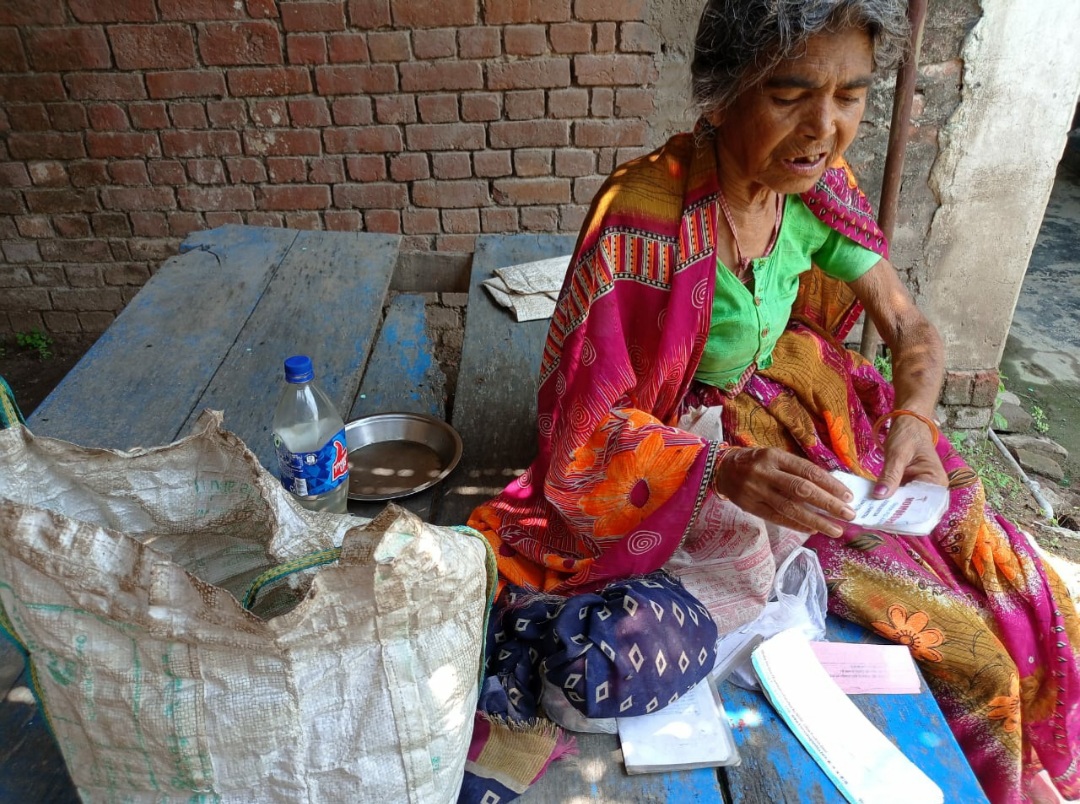 November 8, 2021
Ballia district, Uttar Pradesh
Covid 19, Dalits, Health
In this eastern district of Uttar Pradesh, the elderly Sumitra moves on foot from place to place, seeking alms to feed herself and fund her medical treatment. Her situation is not unusual for elderly rural women
Student reporter: Khushboo Gupta and Jyoti Gupta

Bent over double as she moves house to house, Sumitra dadi is a familiar sight in my village Sahatwar. Thin to the point of emaciation, her angular shadow appears across the threshold before she does, her arms outstretched, begging for food. She has been doing this for the last 12 years – ever since she was abandoned by her family when her health started to fail.

Now over 60 years old, she moves slowly on foot through villages like mine in Uttar Pradesh’s Ballia district and through neighbouring Mau and Fatehpur districts, asking for food and medicines, or money to buy them.

Free rations are of no use to her, as she points out, “I do not have any place to cook.”

Instead, Sumitra (she uses only this name) prefers cooked food or hard cash with which she can buy her medicines. She explains, “I have a painful gaath [lump] in my stomach. A hospital in Varanasi [a 100 kilometres away] said I should get it operated on, but they needed my next of kin to sign some papers. I have no one, so I cannot go ahead with the operation.”

My family and I have recently returned to our home in Sahatwar village from Mumbai where my late father Gopal Gupta, worked and we went to school before the nation-wide lockdown sent migrant families like mine back home. Our family’s battle with Covid and the subsequent financial struggle is recorded here: Seeking Covid care in Kalyan:debt unto death.

Now back in our village in Veruarwari block, we see Sumitra every day. She’s on the move constantly, looking for a safe spot where she can lay herself down, next to her white plastic bag containing all her worldly goods: two sarees, her medicines, her medical reports and a small steel plate which she uses to eat. “Maintaining my medical papers, making sure they don’t get wet or torn, is difficult for me,” she tells us.

Although eligible for state and central government schemes for the elderly, Sumitra has no ration card, Aadhaar card or voter id card which are essential to apply for any schemes. “I tried to get my Aadhaar card made but could never complete the process,” she says.

Insistence on online registration has proved an insurmountable hurdle. ASHA worker, Suranga Verma, says, “We do help with online registration for women to access the pension scheme. But Sumitra keeps moving from place to place. Further she doesn’t have a bank account nor any identity cards, so it’s difficult to register her.”

India has 73 million people in the age group 60 and above (Census 2011). The situation of elderly women like Sumitra in rural areas, is particularly alarming, with 71 per cent of them (in 2017-2018) depending on others for survival, according to a 2021 report, Elderly in India, published by the Ministry of Statistics and Programme Implementation.

Sumitra was born in a Dalit family of landless labourers in Moon Chhupra village of Revati block in UP’s Ballia district.

“My childhood went in gathering wood for the chullah [stove] and in taking care of my younger sister,” said Sumitra. She doesn’t recall how old she was when she got married, saying, “I had little knowledge of these things [marriage]. My grandfather thought marriage would give me a better house, I would be looked after.” Sumitra is referring to the death of her younger sister who succumbed to an illness as the family could not afford treatment.

At a very young age Sumitra was married to Shambhu Gupta, a widower with two young children. Her most enduring memories of her marriage are the physical violence at the hands of her alcoholic husband, an agricultural labourer who rarely sought work. They depended on Shambhu’s father’s earnings of Rs. 100 to 200 a day as an agricultural worker. The family had rented an acre of land, but Sumitra recalls not being allowed to step out of the house to work on it, saying, “I wanted to work but he [her husband] never let me step out of the house.”

A year after Sumitra was married, they had a son, but he died within a few months. “Kuposhan see mar gela mara bachava,” My child died of malnutrition. I never had any more children,” she says and falls silent.

Sumitra remembers a time when her step children were good to her, “but as they grew up, neighbours and relatives would remind them that I am not their mother, and that I would take everything away from them, and so they started distancing themselves from me.” She stayed with her husband for a decade, finally leaving him after a particularly severe beating.

Her cousin Meera, offered her a place to stay, and so she moved into her home, and ended up staying for more than 15 years. Sumitra would do the house work and take care of her cousin’s three children. Her case is not unusual – over 70 per cent of elderly women in rural India are engaged in unpaid domestic labour, says this report.

Two years later, Sumitra’s husband passed away, but she didn’t consider going back to her home, fearing that the violence would continue, this time at her step-son’s hands.

One afternoon Sumitra developed a severe pain in her stomach, and when the pain didn’t subside, she was taken by her cousin to a local doctor. “I don’t know exactly what the doctor said, but I did learn that I needed medical treatment and a small operation. I was asked to take medicines for the next 10 days.”

Initially her cousin covered the expenses, but soon the rest of the family and neighbours began to believe that a spirit had entered her body. “I was in pain most of the day, groaning and walking with difficulty. My cousin threw me out of the house saying that an aatma [spirit] was not leaving my body.”

Other doors shut in her face as Sumitra sought help and shelter from relatives. No one in the family was willing to take her in and she had no option but walking from village to village, begging outside temples and homes, and sleeping in any open shelters.

Some good Samaritans did help. “Over a few months I managed to collect around 200 rupees, so I could make the trip to a government hospital,” says Sumitra. However, the visit would prove futile as without a family to support her, the doctors were unwilling to treat her.

When the pain was unbearable and she had no money to make a trip to the hospital, she would approach Ayurvedic or local healers for pain relieving medicines. “The pain kept coming back, and every year it has grown worse,” she adds.

Under the National Social Assistance Programme, Sumitra is eligible for a number of age-related benefits. These schemes of the union Ministry for Rural Development, offer a Indira Gandhi National Old Age Pension Scheme entitles women over 60 years in age and living below the poverty line to ‘a monthly pension of Rs. 200 up to 79 years of age and Rs.500 thereafter.’ As a widow, Sumitra is also entitled to the Indira Gandhi National Widow Pension Scheme which says that ‘BPL widows aged 40-59 years are entitled to a monthly pension of Rs. 200.’

Sumitra has never heard of these schemes. “I do not know how to get such help. In any case, I don’t have any documents to show,” she points out.

For the past one year Sumitra has been struggling due to the ongoing Covid situation. People don’t let her come close to their homes, “I roam around so they must be scared I will get Covid and pass it on to them.”

Getting up to leave, Sumitra tells us, “This time I am thinking of going to Lucknow hospital [500 kilometres away] as someone told me they can help. I want this unbearable pain to go away.” She then moves towards the village temple where she will sit for alms.

We are leaving the village now, returning to our life in Mumbai and we don’t know when we will see her again.

Jyoti Gupta is a student of Manjunatha College of Commerce, Mumbai, and Khushboo Gupta is registered with GRC Hindi High School, Mumbai, for her Class 10 correspondence exam.

They wrote this story when they returned to their hometown during the lockdown.