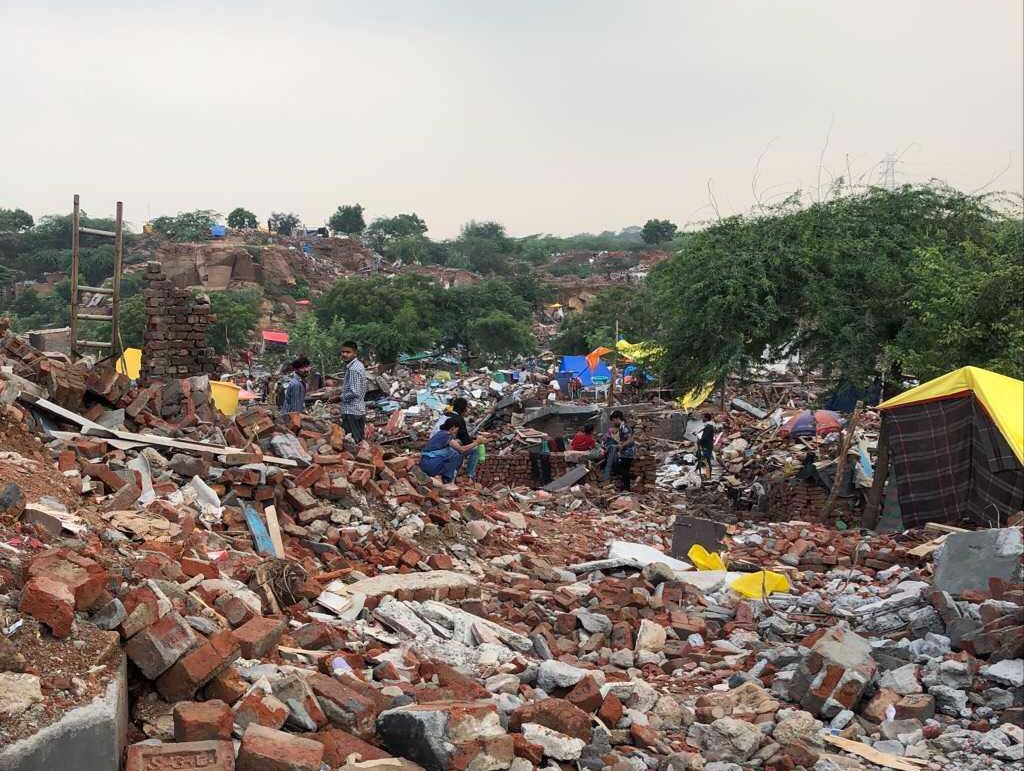 January 24, 2022
Faridabad district, Haryana
Migrants, Videozone
The demolition of houses in Khori came as a shock to the residents of this settlement. Most are daily wage and domestic workers who had invested their life’s savings to build homes here
Student reporter: Priyal Sethi

“Our years of hardwork and memories lay in pieces in front of us,” says Mahesh Rajwada.

He is referring to his brick home in Khori, a settlement of low income homes located in Faridabad district, less than five kilometres east of Delhi, on the capital’s border with Haryana.

Not just Mahesh’s home, but thousands of homes in Khori fell to the might of bulldozers brought in by the Municipal Corporation of Faridabad that was acting on the orders of the Supreme Court. On June 7, 2021, a notice was sent by the SC to the Municipal Corporation to evict the residents and demolish all houses in Khori which had been illegally sold. They were termed ‘illegal encroachments’ on Aravalli forest land. The Court gave the residents six weeks, but that was not enough time for them to move out.

Mahesh, 44, is a daily wage worker, and he says, “I paid one and half lakh rupees for the land to build my house, and another five lakhs to build it. My house is the only thing I own and it has been reduced to rubble by these bulldozers.” At the time of purchase and building, Mahesh says no one warned him about the sale being illegal and is convinced the land mafia here is hand-in- glove with the land and forest departments (an earlier report in Indian Express corroborates this). “Nobody told us anything even when I started construction on the site,” he points out.

Mahesh’s older brother Ramesh, 40, who also found his house reduced to rubble during the recent demolition, says that eviction during the monsoons has hit them particularly hard. “All our household articles were destroyed in the rain as there was no covered space for them,” he said, and speaking of the last few days he adds, “The electricity and water supply were cut off by the officials and there was no food in our house to feed our young children and we cannot charge our phones.” Ramesh used to assist Mahesh in his labour work to earn a living.

Almost a month later, in view of the distress caused by the demolition, the SC on August 4, 2021, ordered the Haryana government to rehabilitate those evictees who were eligible. As Khori lies between Delhi and Faridabad, some of the residents are registered in the voter list of Delhi, making them ineligible for the rehabilitation scheme being offered by the government of Haryana.

Kishan Singh is a member of the Khori Mazdoor Awas Sangharsh Samiti, a union of workers in Khori. He explains: “Since the land here was available at a cheap rate, the people bought it using kaccha [not official] bills. People here also have ration cards and voter cards on these addresses.”

Given only a week to move out was hard for Ashok Lal whose home in Khori is his sole saving. He remembers seeing official looking documents when he handed money over for the land. Now 28 years old, he has been living in this settlement for 10 years. A daily wage construction labourer, he built his house himself, laying the foundation and adding the rest with savings from his earnings of roughly Rs. 3,000 a month. “I took a loan of three lakh from my employer to buy the land on which his house is built. My life’s savings are in this house.” he said.

His brothers, Samar Lal and Raman Lal, were also impacted. Samar, 30, lived with Ashok for the last 10 years while Raman, 33, lived next door. A construction worker like his brother, Raman and his wife Tara bought the neighbouring parcel of land when they got married in 2015. The brothers work for a private contractor who hires them for short projects; they do odd jobs when they can. Tara (uses only this name) was a domestic worker who switched to work with them on construction projects. “They cut off our water supply and so we had to defecate in the open. Is the safety from the coronavirus only meant for the elite and not us?”

“If we protest to gain these basic rights, the police beat us and file cases against us to make us quiet,” adds Raman. Both Ashok and Raman’s families were living on the pavement for a week and then moved to a location close by where they built a temporary shelter.

Samar was meant to get married this year. “We have no future now. Our whole life was demolished and we are left with nothing,” he said. The precarious situation at home is holding the brothers back from going to their work site. “Our boss is not firing us and has promised jobs in the next project, but we do not know when it will happen,” said Raman.

Priyal Sethi is an undergraduate student of Political Science and International Relations at Ashoka University, Sonepat. She lives close to Khori and when she saw a lot of barricades going up around it, she was curious to know what was going on.

She says, “I found it difficult to speak to anyone there.  Police presence in the area had increased and taking photographs was hard. Reporting this story showed me that the voices of people  are powerful.  I learned the importance of listening and being more aware of what is happening in my immediate surroundings. I realized that writing a good story means doing research and asking better, more specific questions.”

Yash Bisht is a undergraduate student of Journalism and Mass Communication at Bennett University, Noida. He worked on the video featured in this story as part of his internship with PARI Education in 2021. Yash says, “There is a responsibility in our hands when we tell people’s stories. It is important to show what is true and try our best in doing so.”