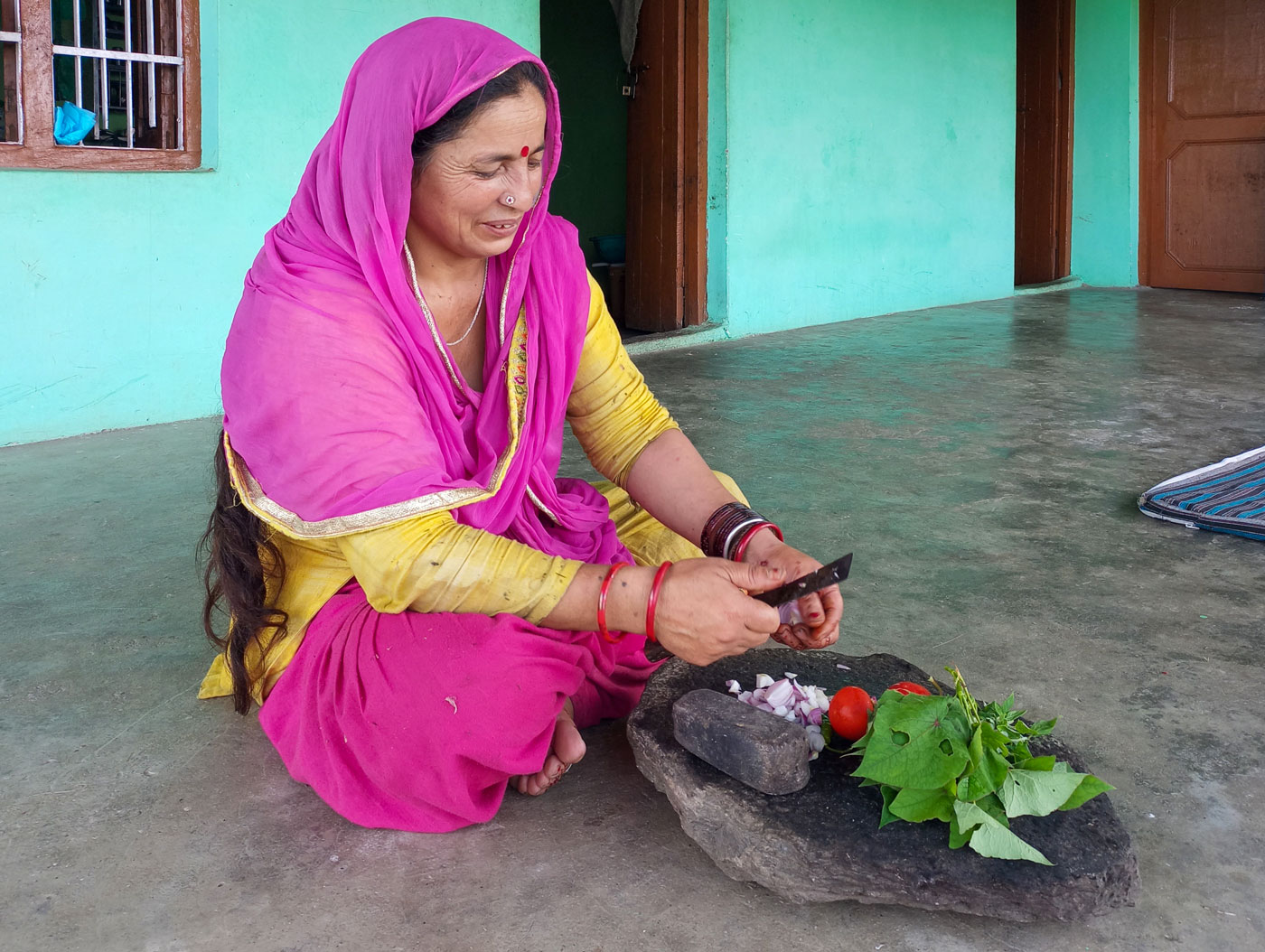 The cool climate and large forest area of hilly Himachal Pradesh supports a great variety of flora. Trees, shrubs and herbs grow in abundance on its mountain slopes, in the valleys, and in the coniferous forests and alpine meadows here. They are a rich source of nutrients and phytochemicals in the local diet. Nearly 360 species of wild edible plants that grow here  – fruits, flowers, seeds, leaves, roots, stems and tubers – make their way into the kitchens, where they are transformed into bhaji, chutney, pickle, seasoning, flavouring, and more. Here are some delectable examples from the kitchens of Kangra district.

Sapna Devi makes a chutney with burans flowers (rhododendron) – the pink blossom of an annually flowering tree found in the mountains of Himachal Pradesh where she lives. To find them she might need to travel up to four kilometres from her home in Kandbari village of Kangra district. Burans grow in the summer and the process of bringing them from the mountains takes an entire day. The petals are used to make a chutney here in Himachal Pradesh.

The flowers must be washed first and dried for two to four hours before being stored in a box. The juice of these flowers is also consumed and it is considered beneficial for the hair. “Most of the items in our kitchen come from the forest and mountains,” she says, adding that “the burans flowers are beautiful in appearance, their chatni (or chutney) is delicious and can be eaten with roti-sabzi. Even children love its sweet and sour taste.”

Sapna’s family are farmers and depend on agriculture and agricultural labour to get by. Her husband used to work in Kashmir before the lockdown, but has returned home now.

Patrode leaves (colocasia) grow wild and are available only in the monsoon months from August to October – their availability ending with the season. Jamuna Devi and Kiran Devi are both residents of Kandbari village in Kangra district. “Patrode are very famous in Himachal Pradesh and aren’t sown, but grow on their own,” says Jamuna Devi. They are not available in the market, but they can be found in most homes.

Jamuna Devi says she loves spicy patrode, which takes a lot of time to prepare.

Thick bengal gram flour and spices are applied to the leaves of patrode, which are then rolled. These rolls are steamed and cut into slices for serving. Sometimes, a seasoning of sesame and coconut is added on top.

“Lungdu is rarely made, maybe once a month,” says Jamuna Devi. The coiled fronds of ostrich fern (Matteuccia struthiopteris) are a rare find; the fern grows only during the rainy season in the forest. It’s not easily available in the market and can be quite expensive – a kilo of lungdu costs around Rs. 150.

Jamuna Devi says that to make radish pickle, one must begin by first grating and drying the muli (radish) in the sun for a week.

Once this is done, the bhabri salt is made by adding red and green chillies, and salt (namak), to ground bhabri (holy basil) leaves. Bhabri ka namak is a popular flavoured salt used in Himachal Pradesh, sprinkled on cucumber, lemon, salad and corn. The leaves of the bhabri plant are washed and mixed with common salt. A few green and red chilies are also added to the mixture. The preparation is slightly spicy and sour in taste since the bhabri leaves are mildly sour. Basil plants thrive here without requiring special attention and are easy to maintain.

Finally, to pickle the radish, the bhabri salt along with oil, cumin and lemon are added. “The radish pickle cannot be stored for longer than a month,” she says. However, it can be made in any season.

Ramesh Rajput belongs to the Gaddi community, and this 60-year-old loves to cook and feed people. A father of four children (two sons and two daughters), Ramesh cooks food for the people of Avishkar and Sajhe Sapne organisations in Kandbari village. He cooks three meals a day for at least 40 people.

He learned his trade from his father, who, like him, used to cook meals for different organisations. “I like watching people enjoy my food,” says Ramesh, a master at making babru, a sweet eaten on auspicious occasions in Himachal Pradesh.

Babru is made with a batter of wheat flour, gram flour, sugar and milk, and is made only for weddings or special occasions.

Ramesh starts by soaking saffron in milk. He heats 1.5 tablespoons of ghee in a pan and adds cashew nuts, almonds and raisins to it. When the raisins start to swell, he pours the contents of the pan onto a plate to cool. He then heats the remaining ghee in a pan and adds cinnamon and cloves to it, after which he adds the rice and fries the mixture for 2 minutes. He then adds sugar and stirs it in. When the sugar starts dissolving, he adds the saffron-infused milk, water, and turmeric to the pan. He stirs this together and when it comes to boil, he covers it, letting it cook on low flame. When the water dries up, he turns off the gas and mixes in the fried cashew nuts, almonds, raisins and cardamom powder. The sweet rice is ready to eat.

Rinky Yadav is from Madhopura village in Datia district of Madhya Pradesh. She is a final-year Bachelor's student at Maharishi Mahesh Yogi Vedic Vishwavidyalaya. She was chosen by the non-governmental organisation, Sahje Sapne, for a year-long mentorship and skilling programme that included a short course on documentation with PARI Education.
She says: “I really enjoyed learning about the food and kitchens of Himachal Pradesh – that too recipes that we don't know very much about. The fact that all their food is grown locally in their gardens and is not from markets is fascinating to me."