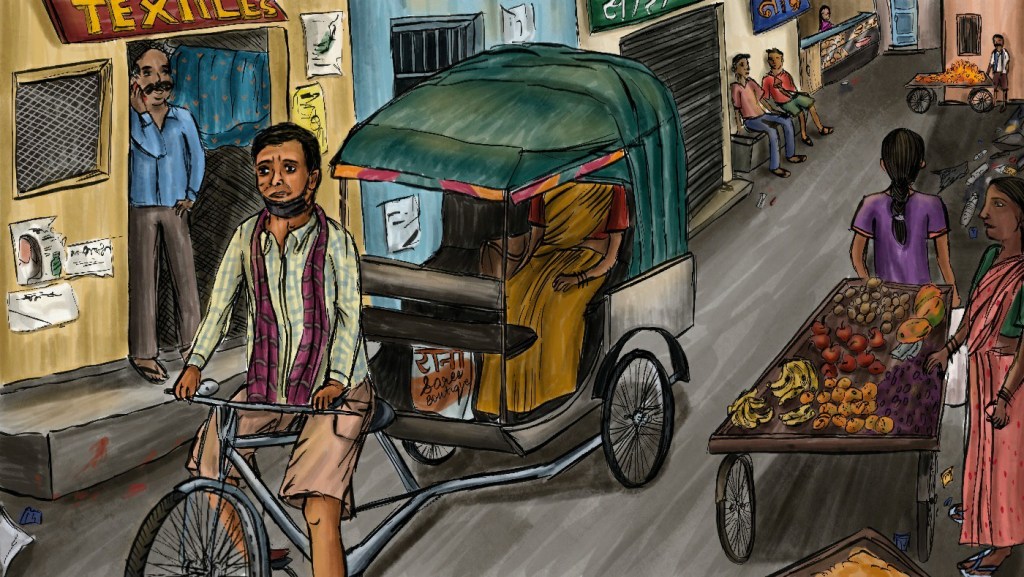 June 15, 2021
Cuttack, Odisha
Covid 19, Things we do
Tukuna Samal hires a cycle rickshaw and plies it through the day. Busy, narrow and potholed roads are the hardest, and he must rest before he can start plying again
Student reporter: Disha Acharya

For 25 years, Tukuna Samal has pulled cycle rickshaws in Cuttack, Odisha. And in all these years 50-year-old Tukuna has never been able to own the rickshaw he operates.

He rents it at Rs. 30 for eight hours and ferries passengers in and around the city.

The rickshaw’s owner, or ‘maalika’ as he refers to him, rents out rickshaws to men like Tukuna who can’t afford to buy one – a rickshaw can cost roughly Rs. 7,000; in addition to this there is the cost of the license that needs to be periodically renewed.

The maalika sits in Jhanjiri Mangala a locality on the eastern side of Cuttack city. Tukuna cycles 20 kilometres from his home in Bayalis Mouza, a hamlet near Jhinkiria in Cuttack Sadar taluka to get here.

Once he rents the rickshaw, he must pull it for two kilometres to get to the heart of the city – Chowdhury Bazar. “From Chowdhury Bazaar, I usually get trips to the High Court, CDA Sector 7, Buxi Bazar, and Mangalabag,” he says, reeling off the busy parts of the city where he ferries his customers.

Each of these trips is a journey of roughly two kilometres and will fetch him anything from Rs. 15 to 40 per trip. “From Chowdhury Bazar if I take them to the High Court, I charge 15 rupees and if it’s CDA I ask for 40 rupees,” he explains.

It’s almost 1 p.m. and Tukuna is waiting at Balu Bazaar for a passenger. “I come here every day at 10 a.m. and wait,” he said. “In the lockdown, everything was shut and my dhanda-paani (livelihood) paused. People are not getting out a lot these days so we’re getting fewer customers than usual,” he says, adding that even after the lockdown was lifted things didn’t improve much. His earnings have come down to between Rs. 150-200 a day.

The ride between College Chhak and Choudhury Bazaar (a distance of four kilometres) has been the farthest he has taken passengers. “It’s very tiring. I had to rest for a while there before I could pull my rickshaw again,” he remembers.

Tukuna’s home is in Bayalis Mouza, a hamlet in Cuttack Sadar taluka. He lives here with his family that includes his wife, daughter and father. “When the responsibility of my family fell on me, I decided to do this. I didn’t want to work in a company because they don’t provide daily wages,” he says.

His day typically starts at 5 a.m and he eats the breakfast his wife has prepared. “I eat pakhala (a traditional Odia dish of  rice soaked in water and curd) with aloo poda (roasted potato), baigana poda (roasted brinjal) or any other vegetable depending on what is affordable. We all sit together and eat,” he said. He finishes a few chores at home before leaving for work.

By 4 p.m., Tukuna is ready to leave for home. “I spend time with my family. My daughter is in Class 10, and I enjoy talking to her about her day in school. We have a television at home so we watch the news and other programmes,” he says, adding, “Swapna [daughter] goes to a government school so we don’t have to pay fees, but we send her to tuition classes in the evening, which costs us 500 rupees. I want my daughter to study well and get a good job so she can have a better life.” Tukuna studied till Class 6.

His wife Arati is part of a self help group (SHG) in their locality and when the family needs a loan they reach out to the SHG as that is the only source to borrow from. “We wish we could get some more help from the government,” says Tukuna, as he turned away, waiting for a customer to turn up.

Disha Acharya completed her Bachelors in media and communication from the Manipal Institute of Communication in 2020. She says: “When I met Tukuna Samal in December, 2020, he was the only rickshaw puller in the area waiting for work. Even though most shops were closed in the intense afternoon heat, he stood on the streets of Cuttack with hope that he would find the odd customer and thereby ensure a better life for his daughter. As an aspiring reporter, working with PARI Education has helped me understand how to look for stories, and I see so many around me that we ignore.”

Antara Raman is an illustrator and graphic designer based in Bangalore. The social sciences and a passion for ecology and conservation are the biggest influences on her work. An avid reader, her illustrations for PARI are defined by their narrative quality and metaphorical use of colour.