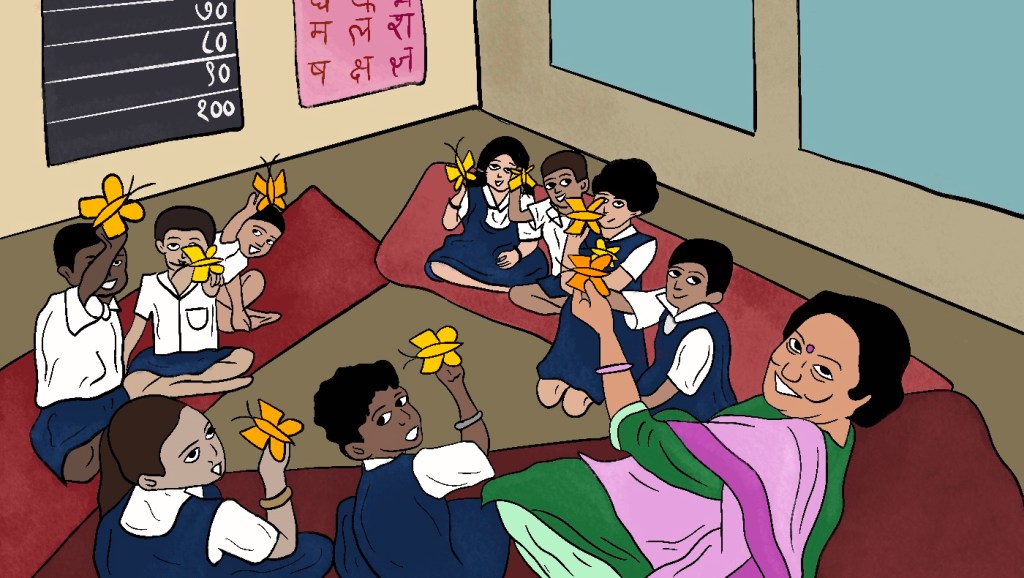 Staffroom stories: in Palghar and Thane districts is an account of four government school teachers who teach at zilla parishad schools in Maharashtra. During the lockdown, they have continued teaching young children of daily wage workers, landless labourers, migrants and children from slums. One of the teachers profiled, Rekha Swami has built a relationship with the parents and that has helped to keep her first generation learners engaged during the lockdown.

Rekha says, “I made a 1-2 minute video of a poem about butterflies from the Class 2 Marathi textbook. It has visuals of butterflies in nature with a child’s voice reciting, which was actually my voice; I used an app called Kinemaster to tweak it to sound like that a child.” Geetanjali Sharma, was inspired to create this artwork based on Rekha’s teaching techniques.

Geetanjali Sharma is an undergraduate student at Ashoka University. She did an internship with PARI Education this summer and was inspired to create this piece after reading Rekha Swami’s story in Staffroom stories: in Palghar and Thane districts. She says, "The teachers made so much effort to keep the students interested in learning, despite logistical issues. Rekha went that extra mile to ensure that her students could continue to access an education."