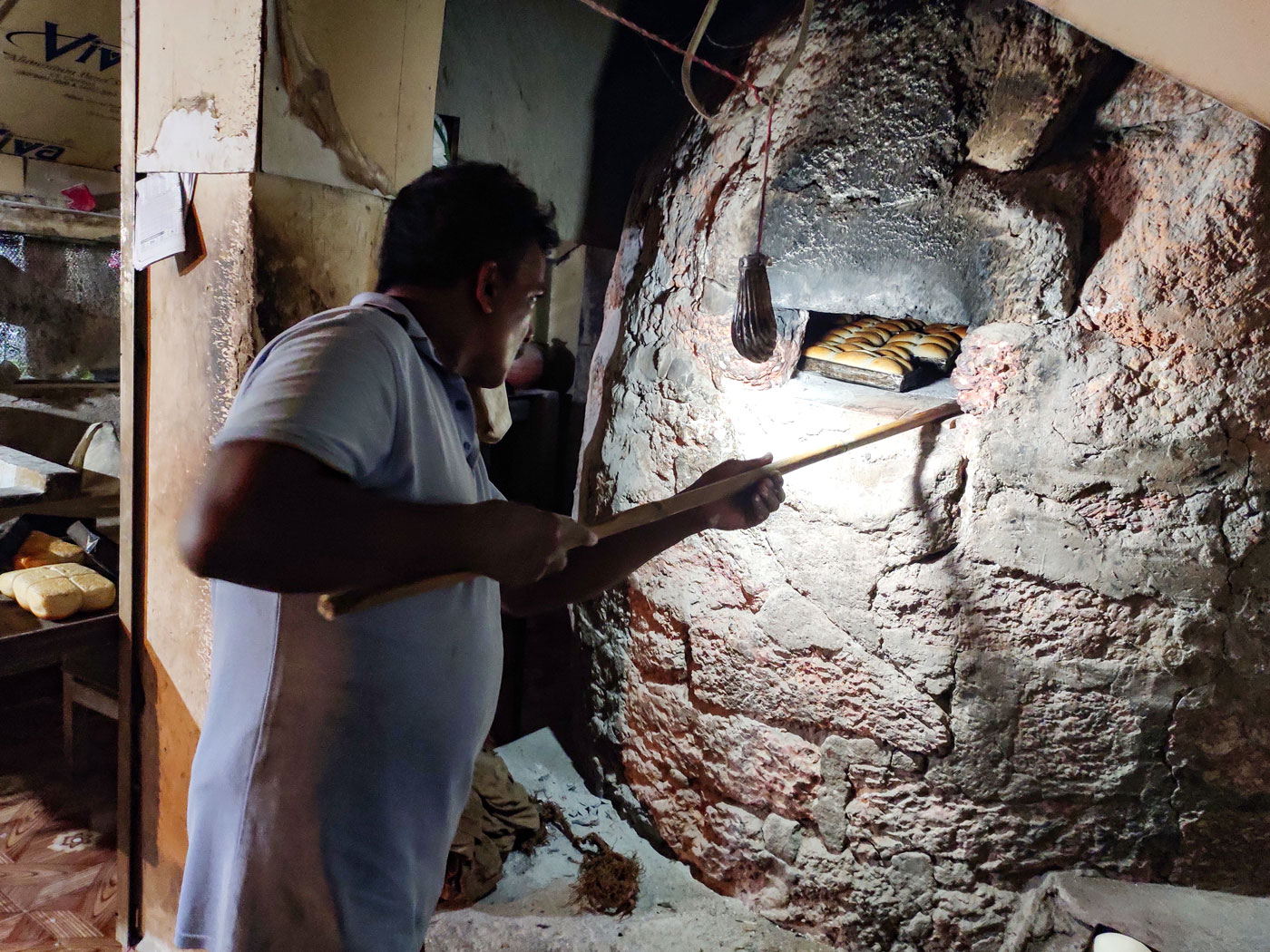 February 24, 2022
Benaulim town, South Goa district
Things we do, Things we make
Running a bakery is a 20-hours-a-day job, seven days a week. To keep from burning out, the Crasto family have an unusual arrangement
Student reporter: Zara Dias

At 4 a.m, long before dawn breaks, Sebastian Crasto is awake and busy at work in his bakery. While darkness shrouds the town of Benaulim, he quietly gathers the ingredients — maida, yeast, salt and water — that will be combined to make the first batch of dough for the day.

In the dim white light of the single bulb illuminating the bakehouse, he swiftly breaks a cake of fresh yeast in half and tosses it into a large mechanical mixer along with bucketfuls of flour and a handful of salt.

“I used to knead the dough by hand for years,” says the 55-year-old baker, pointing to a broad and shallow stone basin. “But as I got older, it became too difficult, so I purchased this mixer to help me.”

As the large bowl spins, clouds of flour rise in the air. He carefully begins to pour in small quantities of water, alternating it with maida. Sebastian is creating pao –  a staple breakfast food in Goa, and his bakery has been making it for over a 100 years. There is no signage, not even a rough nameplate on the door to identify the place, but going by the crowds that line up each day, it’s clearly not needed in this town of 11,919 people.

Sebastian has been involved with the bakery since he was 11 years old and when we asked about measurements, he laughed and says, “No measurements! I just know how much to put. I’ve been doing this for so long that I can tell just by looking.”

“When my father took it over, it had already been in my family for around 70 years,” says Sebastian, who took it over when he was 25 years old. “A friend of the family gifted the bakery to my father. The original owner had been trying to have a child for years but it was only after my father made him my godfather, that his family was blessed with a child. In gratitude, he left the bakery to my father and his brother,” he adds.

It’s early in the morning, and the steady droning of the mixing machine does not rouse his three daughters from their slumber in the adjacent room. Around this time, his wife Sezia wakes to begin the household work for the day.

Scooping the dough out of the mixing bowl, he kneads it briefly before leaving it on the granite counter to rest. He picks up another batch of dough and with quick, practiced movements shapes them into balls that fit into small rectangular metal trays. “This is the dough I made [last] night, after closing the bakery. It rises as we sleep and this way I can make at least three batches per day,” he explains.

Once all the trays are full, he begins sliding them into the deep floor-to-ceiling wood-fired oven that he had lit earlier: “I can only put in one tray at a time because the opening is so small. It was designed decades ago to allow as little heat to escape as possible. The ovens in modern bakeries have a bigger mouth and they can take four to five trays at once.”

The warm and yeasty aroma of baking bread fills the room, and Sezia opens the windows of the front room to attend to customers lined up outside. The golden, crusty fresh warm pao is wrapped in a torn sheet of newspaper and slipped out the window into their waiting hands. The bakery charges Rs. 5 for a single pao and poiee.

“We had to close the bakery for five days when the first nation-wide lockdown was announced, but we are an essential service, we have been able to keep the bakery open since then,” says Sezia. “Sales have actually increased because people are no longer eating out, but consuming [at home] more than before,” she adds.

When the children – Sibany, Rosha and Swizel – wake up, usually around 8 a.m., they take turns manning the counter, scurrying back and forth between the bakehouse and the front room to serve fresh bread. Later in the morning, Sebastian heads out on his bicycle, which is fitted with a large cane basket attached to the back seat and is covered in blue tarpaulin to protect it from sudden showers. Hearing the toot of his familiar rubber horn, the residents of the villages around here in south Goa, respond with  “poder yeta” or “the breadman is coming”.

Meanwhile, back at the bakery, 22-year-old Rosha attends her morning lectures using an old smartphone. “I have a laptop but the wifi rarely works in this area. Mobile data is the only thing I can rely on,” she shares. She is in her second year of a diploma in education at St. Joseph Vaz Institute of Education. She already has a bachelor’s degree in Science. “The fees for a D.Ed are high, around 34,000 rupees per year. I was very worried about it but Papa said we would manage it if I really wanted to be a teacher,” she reveals, uncomfortable about the expenditure.

It’s been two years since her elder sister Sibany, 23, received a bachelor’s degree in Commerce. She would have liked to join a bank, but has not been able to find work and says, “For now I have decided to help out here at the bakery. It’s become almost impossible to find an opening after the lockdown struck.”

At 20, Swizel is the youngest and takes on tailoring work. “I did a tailoring course and started stitching baby clothes. When the pandemic hit Goa, I made and sold many cloth masks as well,” she says. Swizel did not go to college, a sore point with her parents. “They [parents] were very upset at first. We had a big fight about it but I didn’t want to waste time doing something I wasn’t interested in,” she says.

When Sebastian returns from his rounds, he prepares another batch of dough, this time adding powdered bran to make poiee – considered a healthier version of pao by some. This will be baked in the evening and sold till 11 p.m. along with the paos from the afternoon batch. “I’m not sure of the numbers; I never kept track but I think we make around 3,000 loaves of pao and 1,500 poiee a day. We keep the bakery open as long as possible so that we can make sure they are sold,” he adds.

Working seven days a week with only four hours of sleep a day is an exhausting schedule, admits Sebastian who has been doing it for three decades now. The only day off is Good Friday; on Christmas the bakery stays open as people come to bake their family Christmas cakes in the big ovens.

But the Crasto family has found a way around this: “Every four months, we leave the bakery and move to a house in Seraulim [a nearby village]. For the next four months, my cousin takes over while we rest. It’s been that way since my father’s time as he shared the same arrangement with his brother. Without this period of rest, we would not be able to sustain this schedule,” he explains. Each family uses the money they earn for four months to tide them through the next four.

Once he retires, Sebastian is not sure what will happen to the bakery. “It’s very hard work; no one is interested in that anymore. We will leave it to God.”

This story is part of a series on lives under lockdown. The team at PARI Education would like to thank Akshara Pathak-Jadhav and Perrie Subramaniam, professors at St Xavier’s College (Autonomous) Mumbai, for leading this collaboration.

Zara Dias is a second-year student of Mass Communication and Journalism at St. Xavier’s College (Autonomous), Mumbai. She chose to explore the people and processes involved in the making of bread - a staple of the Goan diet - at the local bakery near her home. She says, “Working with PARI Education made me realise how little I question what I see around me, and how important it is to change that. Every visit I made to the bakery for the story was an exercise in sensitive communication, observation and critical thinking.”