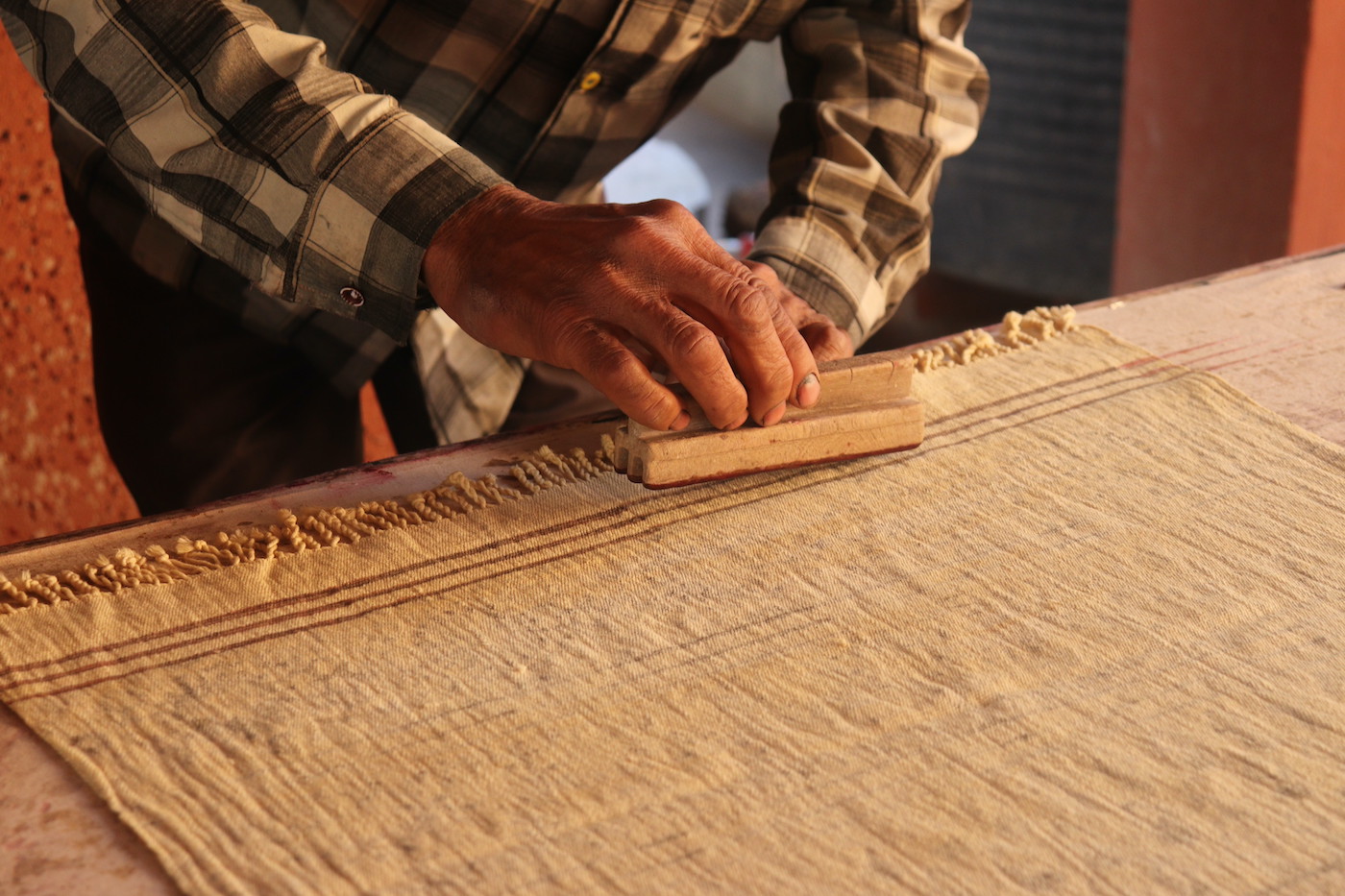 Bent over the work table, his right hand firmly holding a block covered in alum paste, the Bela block artisan is ready to strike on a blank canvas of cloth. His work table is covered with an evenly spread cotton fabric, half-finished block prints, stained blocks and a tray with thick alum paste.

“At this stage in the process, everyone would be sitting together, pressing print on the fabric, talking about ordinary things,” said Mansukh bhai Pitambar Khatri, 55, reminiscing about a time when he was younger. “We had a lot of work then. Whoever was available was put to work – young ones in the family and even neighbours were not spared. As much as the craft belonged to this village [Bela], its people belonged to the craft.”

Bela block-print-making can be recognised by its bold and precise patterns on rustic fabrics, created by alternately washing and dyeing with alum and mud resist application. When Mansukh bhai started learning the craft, there were five families in his Khatri community practising it. “Everyone tried their hand at printing, starting with small pieces of cloth. It felt good to be a part of it,” he said.

Today, Mansukh bhai is a one-man army, single-handedly doing all the printing, washing and dyeing. In his community, he is acknowledged as the sole surviving artisan of this craft. His two sons, aged 22 and 24, are graduates and he is not sure what they will do in the future. He and his family live in Bhuj – around 180 kilometres from the village of Bela where he grew up.

Bela village is in Kachchh’s Rapar block, and was once home to a flourishing block printing trade between Kachchh and the nearby villages of Sindh in Pakistan, then a part of undivided India. “There used to be a lot of business, but after the India-Pakistan border conflicts increased, the trade routes dried up; artisans were forced to abandon their craft,” he said. Special permission is now required from the Border Security Force to even approach the border, he tells us.

The fabrics he currently works on are very different from the rough wool that his father used to print for the herding community of Rabaris. He showed us one such shawl crafted by his father. It was a striking blue with block prints. Kutchi communities of Kanni and Rabari (semi nomadic tribes) and Rajput (a denotified tribe) bought printed fabric from these artisans.

“The traditional Rabari woollen shawl used to be very much in demand before. Now people mostly use shawls found in local markets,” Mansukh bhai said. The patterns are based on traditional Kutchi clothes, such as chaniya and odhni, made in red, white and black for the Rabari and Kanni communities. “It is now coming back in fashion,” he added.

“When I was a child, we had a large Khatri community. But slowly people started leaving this work, the craft and their home as well,” Mansukh bhai says, referring to the migration of many Bela block artisans and their families who couldn’t sustain their livelihoods with the craft. He relates the story of how he and his brother threw sacks of printing blocks into the Saran river because they couldn’t find any use for them. “It was polyester that brought our downfall. It became easier to make faster and cheaper printed fabric with machines,” he added.

Mansukh bhai too left the craft for 35 years in search of a better income. He ended up working in a television repair shop. But a few years ago he took it up again. “My elder brother carried on with the practice on his own. I stepped in to help out when he started having trouble with his foot. I never completely left it and so it was easy to start again two years ago,” he said. His brother passed away a year after he returned.

Mansukh bhai was 10 years old when he began helping out in the family occupation. He would sit beside his older brother who guided and scolded him in equal measure. He remembers that when he was young, men did the printing, while women in the family did the dyeing and washing.

“I started helping out after school from Class 6. I learnt by observing. When I was young, studies weren’t a priority. I stopped going to school and would work in our workshop at home. Everybody helped out and the family also appreciated it.”

Revival of the craft

Bela block printing appears less complex than the Ajrakh-style that also uses resist printing and natural dyes, but it is hard work for just one man. “Alum paste is printed first, then washed and dried in the sun. Good sunlight ensures the colour is fast. The permanent dyeing is done according to the design. It is then washed again and mud paste is printed on the fabric and boiled with iron rust water to get a black colour,” said Mansukh bhai. “I still use our old blocks; some were even carved by my father himself,” he said pointing out the wooden groves in the shapes of clock and peacock.”

Designs for rugs and shawls from buyers are provided to Mansukh bhai who then makes the finished product, sometimes intermingled with his own style. Growing awareness of handmade products, more technical and design support from local organisations is helping Bela block printing’s revival.

“I wasn’t allowed to print in my early learning days. Visiting students mostly want to skim through the craft in hours. They just want to make two-three block marks. One can learn if one is patient, observant and willing to give time,” he signs off.

Samridhi Pandey is doing a masters in Information Arts and Design practices at Srishti Institute of Art, Design and Technology. She is interested in exploring information design in a social context at the grassroot level, combining traditional mediums of artistic expression and emerging technologies. She says, “Collaborating with PARI on the editing process made me realize the sensitivity and care needed for such narratives.”