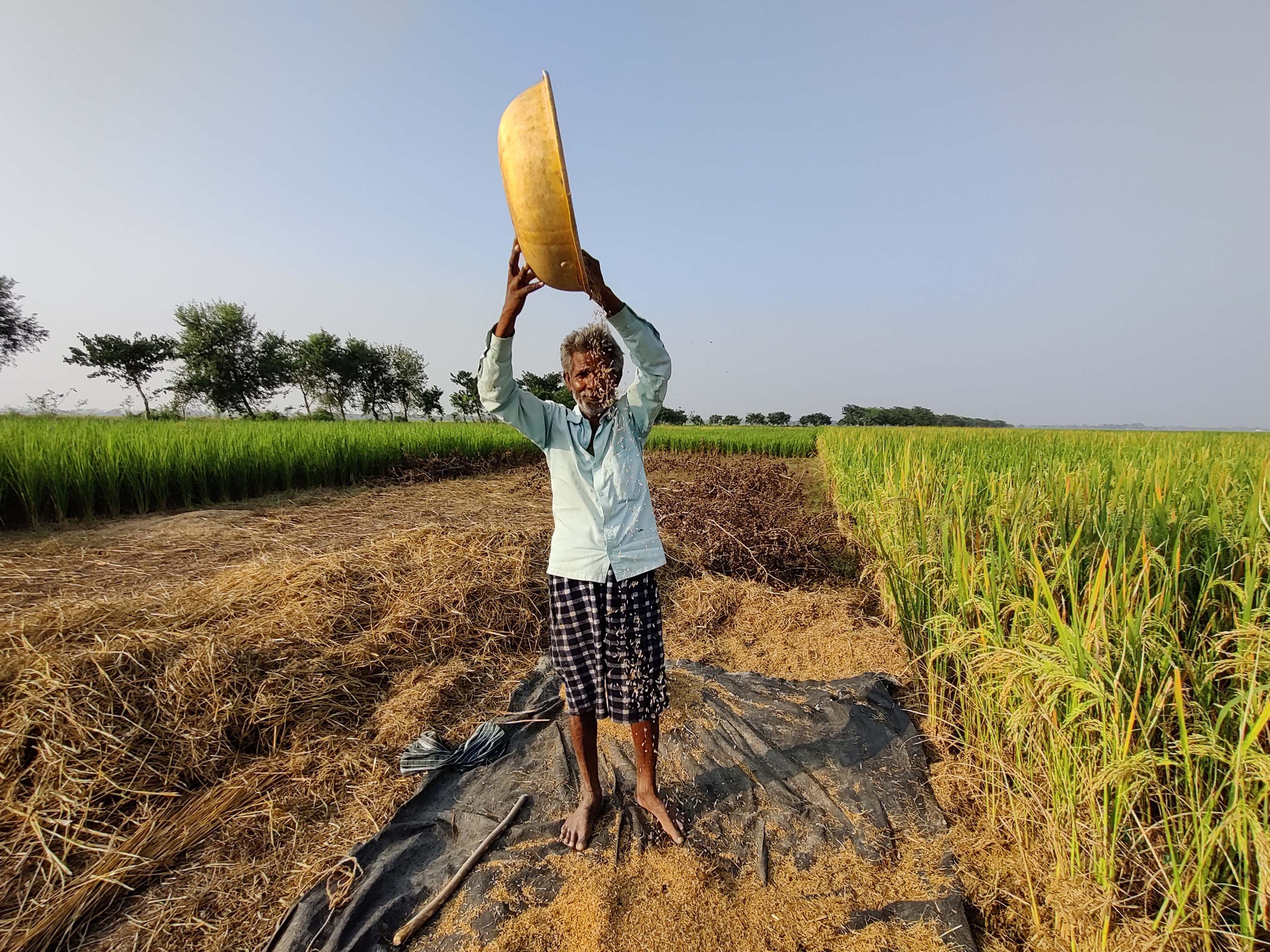 “I have no money, but I work very hard.”

Toofani Rajbhar is an agricultural labourer and goat herder. “Farming hardly pays anything so I do dihadi mazdoori [daily wage labour work] to earn some money,” he said.

The ‘farming’ that Rajbhar of Akhar village is referring to is an informal arrangement followed by many landless folk like him in Ballia district of eastern Uttar Pradesh. He takes a bigha, roughly half an acre of land on rent in an annual tenancy system called lagaan. “Around the time of Holi [in the month of March / April], I take a loan of 14-15 thousand rupees from the baniya at 10 per cent interest rate a month. I can’t get a loan from the bank because I don’t have any property,” he explains. He also has no written proof of the rental agreement, he tells me as he keeps a watchful eye on his six goats grazing nearby.

The loan is used to buy seeds and fertilisers and pay for a tractor to plough the field. When I met Rajbhar in September 2021, in his village in Dubhar block of Ballia district, he was about to harvest his paddy crop. “My entire earning and savings of the year are used up in paying back the loan money and lagaan of eight thousand rupees,” he said. Rajbhar belongs to a community of the same name, listed as Scheduled Caste in Uttar Pradesh.

Lying on the eastern edge of UP, the region of Ballia is separated from the neighbouring state of Bihar by the Ganga river. Agriculture is a major occupation and is carried out by 38 per cent of the population in this district. And many, like Rajbhar, are not land owners, as he says, “We work in the fields throughout the year, but we are not considered farmers since we don’t own the land.”

Having no land and no legal agreements has a ripple effect – he cannot sell in the mandi as he is not recognised as a farmer. “We have to sell it to shopkeepers in the city at half or even less than half the rate in the mandi, sometimes even less or the crop will begin to rot.” In Ballia, prices in the mandi are almost double at Rs. 1,940 per quintal, but he cannot avail of this bounty.

Also in Akhar village, Ramchandar Yadav has taken four bighas of land on lagaan at Rs. 7,000 per bigha. He fears both unseasonal rains and straying nilgai who can destroy a crop in no time. “For the past 8-10 years, rain has had no fixed pattern. It even starts to rain heavily in the winter season. There is also no prediction of the amount of rain. Rain benefits paddy crops in the growing phase, but if it rains once the crop is almost ready, it spoils the yield. Even the soil stops absorbing water because it has already absorbed enough,” said the 60-year-old. He adds how sometimes in winters it rains heavily, and rainfall in the area is no longer predictable.

Yadav said he spends about Rs. 10,000 to plough his four bighas, roughly two acres of land. He hires a tractor and its driver for the job. “I spend around 3,000 rupees for sowing and labourers to harvest and pack paddy into sacks. In return we give them [the workers] a third of the crop they harvest,” he explained.

Sowing work is mostly done by tractors — a factor that has added to the farmers’ expenses. Ramchandar says, “two years ago, for sowing a bigha of paddy I used to pay around 500 rupees. Now I pay 700 rupees for sowing each bigha.” His toal sowing costs add up to Rs. 2,800 rupees a crop, and he says this is likely to rise with the hike in fuel prices.

Inadequate and untimely rainfall puts an added strain on the already beleaguered farmers. “Often our fields are waterlogged due to excess rain. We have to harvest the waterlogged part of the field early to prevent the crop from rotting,” said Ramchander.

Stray cattle and nilgai are a menace to farmers in the area and once the crops begin to come up, farmers guard their fields through till harvest which is done by them; a few hire labourers to help.

What irks tenant farmers like Ramchander is that they are not eligible for the Rs. 2,000 three times a year under the Pradhan Mantri Kisan Samman Nidhi scheme. “The money goes to the landowner. But if the fields are flooded and the crops spoil, we will be the one in ruins, not the landowner [who gets the benefit of the handout},” he points out.

The farmers keep enough paddy to feed their family through the year and sell the rest. “I will harvest around 30 quintals of dhaan [paddy] within a month and I will keep roughly 15 quintals to feed my family” said Ramchandar Yadav, speaking in the month of October.  The paddy will be sold at around Rs. 1,000 to 1,200 a quintal, earning Yadav roughly Rs. 16 to 17,000 rupees – before deducting expenses, “It costs around ten thousand rupees to properly plough the entire field for one harvest.”

With such slim earnings from the lagaan system, both men said they need daily wage work at construction sites to survive. “Our problems have worsened because of the pandemic. I used to get work as a labourer 15-20 days before Covid-19 but now we hardly get any work.” The 20 kilos of wheat and 15 kilos of rice – monthly rations under the Pradhan Mantri Garib Kalyan Anna Yojana (PMGKAY) – helps to feed the family of four – his wife and two children.

The situation of women agricultural labourers is far worse. Women workers do all the cleaning and clearing the ground, transplanting of paddy, harvesting, cleaning and packing of harvest and they get paid Rs. 100-120, half the Rs. 201 per day MNREGA wage rate for both men and women in Uttar Pradesh.

“Since Covid-19, we don’t get work for half the month, and we are stuck at home without any money,” said Usha Devi, 35, an agricultural worker and mother to five daughters, the eldest is Rani Bind who is 13 years old.  Her husband is a construction worker and also struggled to find work. “We were not getting any work due to Covid and barely managed to survive. The schools were also closed, and so my daughter also could not eat at the mid-day meals,” she added.

Parwati Devi, an agricultural worker in her forties believes that since the employers are all men, they pay men more. “No one gives any value to womens’ work,” she said. Parvati is on her way to harvest paddy in a nearby field, two kilometres from her home. She says she will be given a quarter of what she harvests and cleans.

“My father was a farm labourer, I am a farm labourer and my children are also labourers,” says the 81-year-old Manayi Paswan. He lives in a brick and mud house in Akhar village, with five goats that he takes for grazing twice a day. A landless farmer, Paswan has taken a bigha for which he pays Rs. 7,000 as lagaan. “I have four sons and all of them work as labourers for daily wages,” he said.

Even those who own land, don’t seem to be faring better in Ballia. “Being a farmer won’t fill your stomach. If you work as a labourer in a city, you get paid in cash, in hand after the work. But here [as a farmer], we only manage to arrange meals for our families,” said Ramashankar Mishra, 59,  who owns around half an acre of land. Ramashankar has six daughters and one son. Four of his daughters are married and he hopes his son will get a job in a big city.

“A job [in the city] will earn you some money. People are abandoning farming because there is no money for this physically demanding work,” he signs off.

Aryan Pandey is a second year English Honours student at Hindu College, University of Delhi. He learnt about PARI through the lectures of Founder Editor, P. Sainath. Aryan says, "I wanted to do this story and bring out the condition of landless agricultural workers in our country. Reporting for PARI Education made me realise how complex our system is and what actually constitutes the journalism of rural India."