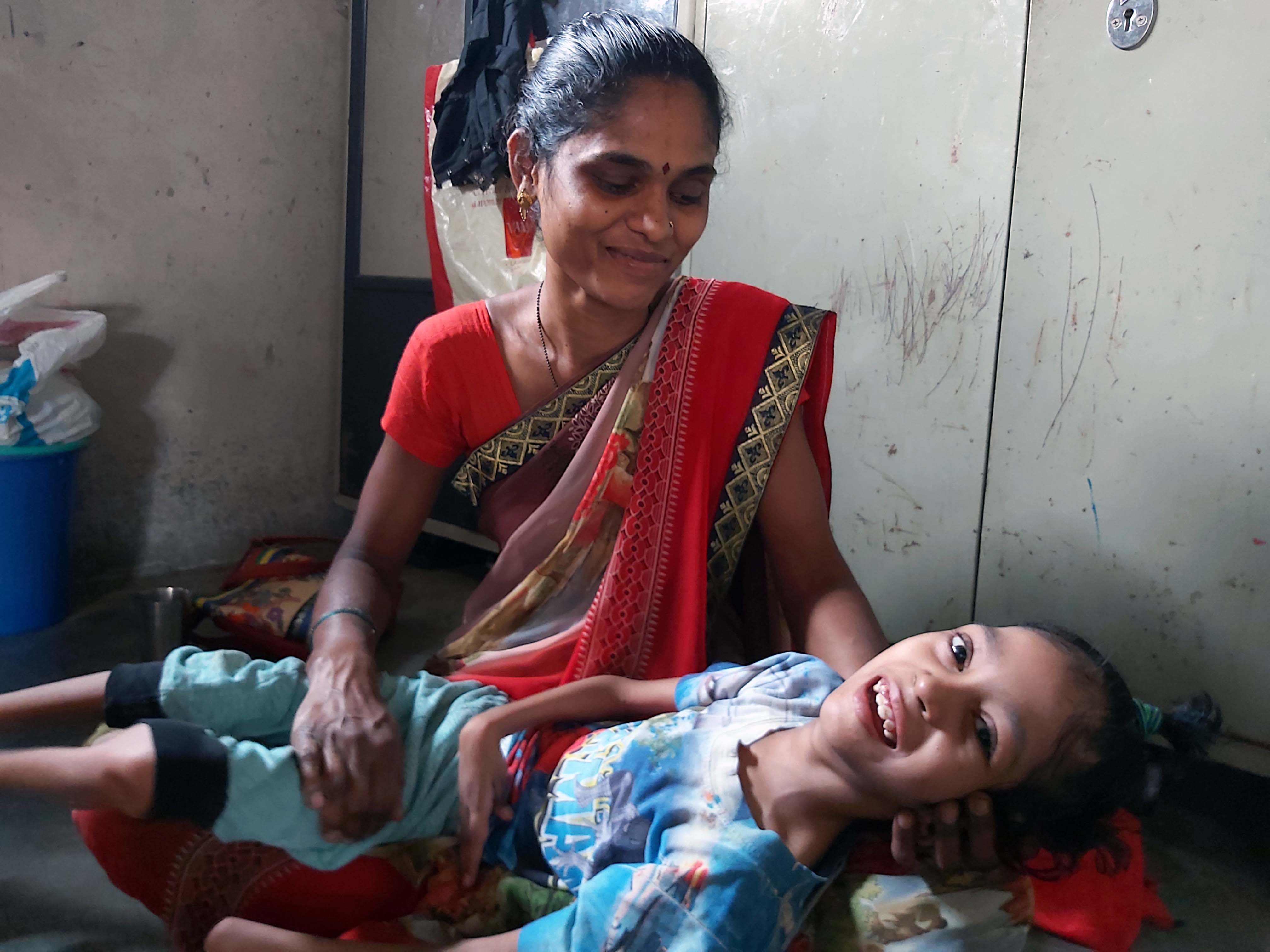 “Lai hushar ahe. She’s very smart. She can’t speak but she understands everything we’re saying,” says Jaya, looking dotingly at her nine-year-old. Hearing her mother’s voice, Laxmi is smiling now and she even breaks into a giggle.

“Wherever I go, everyone is filled with compassion for her, with daya [care] and maya [love]. In a way, I feel proud of my daughter,” says Jaya.

A bright shaft of afternoon sun winks through a slight gap in the single window that is barred with a tin sheet. Two aluminium cupboards are pushed against the cement wall and a gas cylinder, a mixer-grinder, medicines and a rack with utensils are the main objects in the one-room house.

Jaya, a domestic worker, has not had lunch even though it is nearing 3 p.m. and a plate of chopped onions is waiting to be added to the dal on the stove. She first feeds Laxmi bhakri (a thick roti made with bajra flour) that she has crushed in milk. Laxmi can eat only liquid food, and her mother feeds her with a spoon, wiping the dribble from the side of her mouth with cloth on hand.

Jaya’s daughter Laxmi was born with cerebral palsy. “She didn’t cry when she was born. The doctors just said that there was not enough blood supply to her brain and they were giving her medicines for that. They assured me that she would start walking and talking after five years,” says Jaya, clearly remembering the cold December day her daughter was born.

Jaya puts Laxmi down in the bed and continues talking.

When Jaya’s husband Sagar Shinde was alive, the family lived with her in-laws in Annabhau Sathe basti of South Pune. All expenses for Laxmi’s treatment were taken care of by the family. Everything changed when Sagar passed away in 2017 and his parents blamed Jaya for his untimely death. She moved out of her in-laws’ house, taking both Laxmi and Sayli, her older daughter). Laxmi had to be carried up a steep flight of six rickety metal steps – with gaps between each step and no railing to this room at the end of the same basti. Sayli visits her grandparents and spends time with them everyday.

Around that time, three years ago, Jaya became a domestic worker in the high rise apartment complex near her home. She works two shifts – 9 a.m. to 1 p.m. and then an hour in the evening and earns Rs. 5,000 rupees a month. “Aata me majhach karun khate. [I earn my own food and eat it],” is all she is willing to say about the change in her circumstances. What she does share though, is that Laxmi’s physiotherapy has had to be stopped as she cannot afford to miss work and lose wages.

When Jaya was pregnant with Laxmi she began having contractions early – in the seventh month of her pregnancy and her mother-in-law rushed her to the Kamla Nehru government hospital. Worried that the baby may have died in the uterus, an urgent caesarean section (C-section) was performed.

Laxmi was alive but soon diagnosed with cerebral palsy. “Cerebral palsy basically means brain damage. It is a motor disability and so movement is affected and a person’s ability to control their muscles. Patients can have a spectrum of problems right from a mere limp, to the inability to even sit upright,” says neurology expert, Dr. Rahul Kulkarni, Head of the neurology department at Deenanath Mangeshkar Hospital in Pune.

Sitting on her mother’s lap, Laxmi is staring up at the fan spinning in the centre of their one-room house. Laxmi has the most severe type of cerebral palsy — spastic quadriplegia. “Spastic means tightness of muscles, and quad means affecting all four muscles. People with spastic quadriparesis usually cannot walk and likely have other developmental disabilities, such as intellectual disability, seizures, problems related to hearing and speech,” says Dr. Kulkarni.

Unfortunately, this condition cannot be detected while the child is inside the mother’s womb. “I had never seen a child like this before. If I had some experience, maybe I would have been able to do something for her,” says Jaya. Laxmi gained consciousness two days after she was born and was sent to the ICU where she stayed for a month. “I couldn’t eat, couldn’t think, couldn’t do anything else till she came out,” she adds, the memory even now making her shiver.

In India, over 20 lakh children between the ages of 0-6 years are born with disability (Census 2011). The resources, treatment and education required to assimilate into society is not equally available to all, say many reports on the subject.

Both treatment and economic hurdles have been amplified in the continuing Covid-19 pandemic. On March 26, 2020, union Finance Minister, Nirmala Sitharaman announced the Pradhan Mantri Garib Kalyan Package with an outlay of Rs 1.7 lakh crore for the poor, widows and persons with disabilities (divyang) and the elderly. Persons with disabilities are eligible for Rs. 1,000 as a one-time payment, over the next three months. One and a half years later, Jaya and Laxmi still haven’t received a single rupee.

When the scheme was announced, Jaya went to local BJP corporator Mahesh Wable’s office to fill the form, but it resulted in nothing. With the stoppage of work and wages, Jaya says she could really have done with any funds.

In the first three years of her life, Laxmi was carried by Jaya as they walked from hospital to hospital, every 15 days, to undergo check ups and physiotherapy. Climbing the stairs of a public bus was difficult with a child in hand and Jaya said, “the bus zooms off, not waiting for anyone.” So she had to travel by rickshaw – a more expensive option.

The list of hospitals and treatment centres that Jaya and Laxmi have visited are too many to count: the Military Hospital at Aundh, 11 kilometres from home; Sasoon Government Hospital, six kilometres away, and one near the railway station where Laxmi had her first brain MRI (expand), a centre where she stayed for a fortnight and even a private Ayurvedic hospital. “She couldn’t bear it,” says Jaya softly, not wanting Laxmi to hear and relive it again. “For eight days, they rubbed her body with oil. She started crying even if I touched her. But I have to touch her to carry her, right?”

What did make a difference was physiotherapy, but Jaya stopped going two years ago as she was worried she would be sacked if she took so much time off. The physiotherapy was in Navale Hospital around 10 kilometres away, a journey that would take upto an hour and half for the round trip. “I used to take Laxmi thrice a week. I saw children like her who could walk on their own, pick up things with their own hands,” she said.

Around this time, Laxmi had started getting epileptic fits and had to be admitted to the intensive care unit (ICU ) for up to four days when it happened. The fits have stopped now and Jaya has to continue giving Laxmi anti-epileptic drugs, Valparin and Gardenal, for her whole life. They cost a total of around Rs. 200 per month.

Jaya’s older daughter, Sayli is a big support and helps her mother as much as she can, as Jaya says, “Sometimes I feel that I have not given her as much attention. She would cry for me when I had to be in hospitals with Laxmi all the time. I feel that Sayli grew up too quickly without me.”

Sayli, now in Class 7, takes care of her sister when her mother is at work. “I just keep an eye on her. If she starts crying, I make her stop,” Sayli answers like any other older sibling.

To give Laxmi a bath, they both make her sit on a paat (board) in the common bathroom downstairs. Sayli holds her up, while Jaya scrubs her clean with water. She also changes her diapers every four hours. What will happen when she gets her periods? “I’ll manage that too,” says Jaya, matter-of-factly.

Laxmi smiles when she sees familiar faces. She recognises her aunts, uncles, cousins, grandmothers and her favourite relatives are 12-year-old Prem and 14-year-old Gauri, her maushi’s children because they are very affectionate and she loves being swaddled, caressed and held. She plays with all cousins her age and they include her in their game of bhatukali or ghar ghar. Jaya remembers how her father would spend hours playing with her in his lap. When he passed away, Jaya had no way to explain it to Laxmi. “How do you explain death without words? All I could do was hold Laxmi in my lap.”

Laxmi is sensitive and understands things quickly. “Maya keleli kalte, ragavlela kalta [she knows if you love her, knows if you are angry with her],” says her mother, stroking her ponytail that stands upright. “She always wants me to stay beside her, hold her body near mine.”

Jaya can also rely on her sister, sister-in-law and brother to take care of Laxmi when she is away. Her sister Archana is also a domestic worker, her sister-in-law, Mona works at a mall and her brother Ajay, is a driver.

“Sagle jeev lavtat tila [everyone gave their hearts to her],” says Jaya smiling . “Nobody ever asked, ‘How did your child turn out this way?’.”

Aditi Dindorkar is a third year undergraduate student of English and Creative Writing at Ashoka University. She says, “In my attempt to write sensitively about Jaya and Laxmi, I understood how critical attention to detail is while recording and writing; this is what makes each PARI story what it is.”