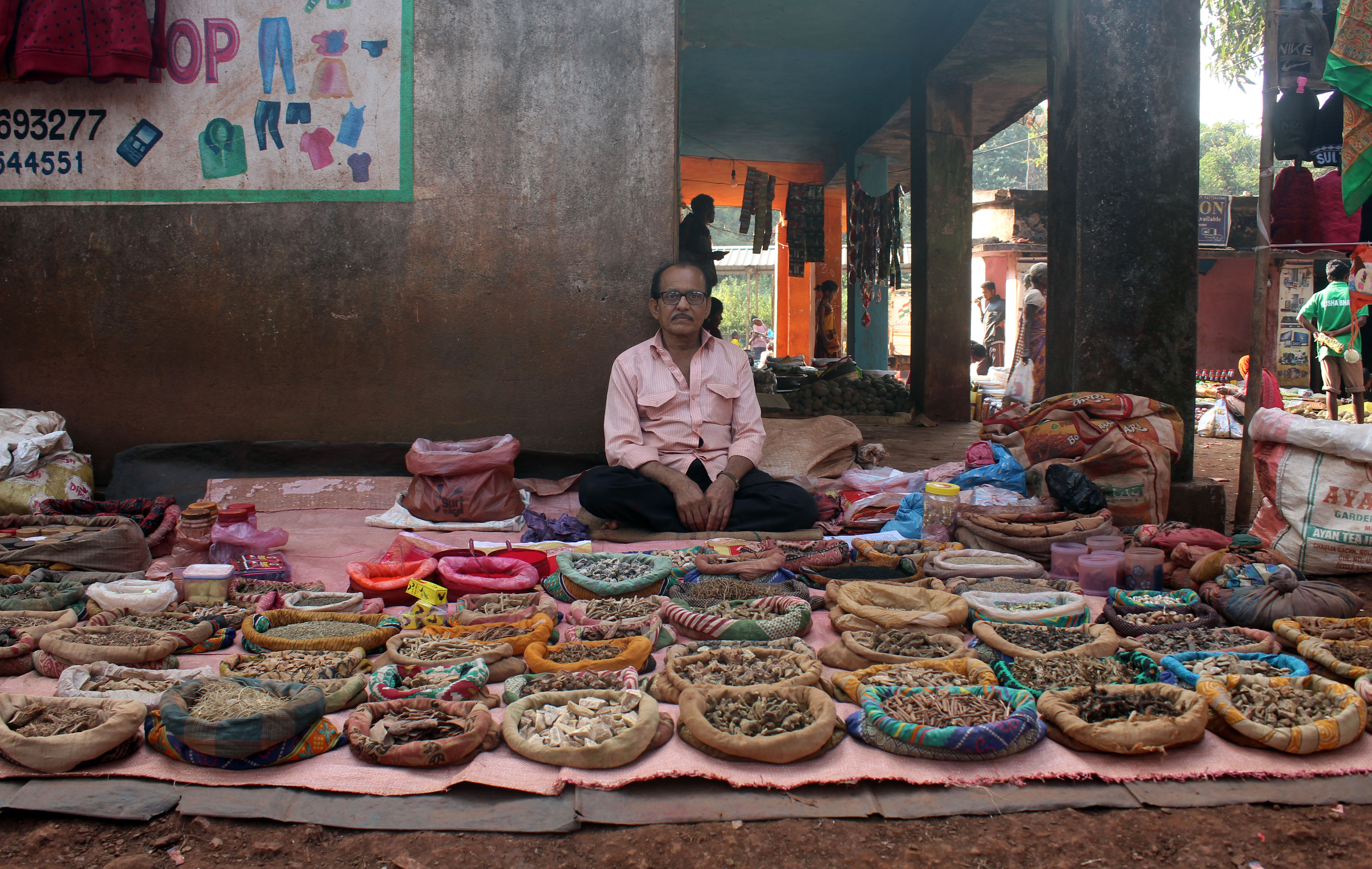 “I am only a vegetable vendor.”

Jai Shankar Tiwari is a little hesitant to talk to us. He’s unsure what he can share with us students about his life.

“I have never been interviewed,” he adds.

Tiwari owns no land and selling vegetables at the haat is his only income. He travels from his home in Rimuli to sell at Jurudi, Koira, Sanindipur and Kalta markets in addition to Kalmanga. He has been doing this for the last 15 years and says he can earn Rs. 1,000 from daily sales at a haat.

“The unevenness of the road sometimes crushes the vegetables I am carrying,” he says of the roughly 60 kilometre journey in his camper van. The damaged vegetables cannot be sold. But still, the draw of many buyers at Kalmanga brings him back with tomatoes, cucumbers, brinjal, cauliflower, cabbage and other vegetables.

Here at Kalmanga haat, people come from over 20 villages. Some from nearby Koida (also spelt Koira) and Ganua, roughly 13-15 km away; others from Joda, 40 km away and Rimuli, a roughly 60 km journey. The haat is held every Tuesday in this village in Koida block of Sundargarh district. People come on bicycles, motorbikes and buses, reaching by 2 p.m. when the market opens.

The 50-60 shops swell to over 70 on festival days. Such as at the beginning of the year, during Makar Sankranti and Magha Parba, celebrated by the Munda Adivasi community. During Thakurani Osha celebrated in November-December by Bhuyan (also spelt Bhuiya) Adivasis and others, sculptures of clay are sold at Kalmanga haat.

A loudspeaker blares out information about repairs for chains, bags, sweaters and more. It’s the voice of Amarnath Sah who repairs chains of all sizes; he charges Rs. 40 to repair a chain. Sah lives in Sukhpali village in Lahunipara block. Originally from Bihar, he moved to Sundargarh district in Odisha 10 years ago.

“I use a mike as I’m old and cannot shout,” the 55-year-old tells us. He also sells stationary at his stall in the market. Talking to us school children, he shares how he dropped out of school in Class 8 and drove a rickshaw for a while. He also did daily wage labour and saved up money to start this business for which he also has a Facebook account. He uses it mainly to keep in touch with his friends back in Bihar.

The vegetables at Jabni Dehury’s stall are all grown by her. The 65-year-old says she uses the money to feed her family. She has  been doing this for the last 20-25 years. “I’m old now so I only come to this market,” she pointed out.

Vegetable vendors say it’s difficult to get green leafy vegetables at Kalmanga. The iron ore and manganese mines in the area, send up clouds of red dust which settle on plants in the vicinity.

Sumati Behera says she is unable to cultivate her land as the mining work in and around her home creates a lot of dust. “I can’t earn money [from selling vegetables] so I do this,” she says, showing us her jhalmuri stall at the haat. She sells this quick snack of puffed rice, roasted gram or peanuts and chopped onions drenched in mustard oil. Sumati also goes to Sanindpur and Barapada haats in Sundargarh and Kendujhar districts to sell the same.

Another vendor, Videshi Patuary, has been selling roots and herbs for more than two decades here. “My father and forefathers all had the same livelihood,” he says. Patuary also goes to Guali and Koida markets to sell his cure for colds, fevers and other medical problems.

In the monsoon, only locals come to shop at Kalmanga haat. The rains make the roads unusable; trucks carrying material from the mines around here often get mired and cause traffic jams. So only those who live within a 5 to 6 km radius, walk, cycle or come on motorcycles.

Manju Munda of the Munda community sells mulika, karadi (made from bamboo) and brooms. Mulika (also called ranu) is a root used in the preparation of handiya (rice beer). When crushed and mixed with water to make a paste, it can be applied to the neck to reduce the pain of a swollen throat.

Radhakanta Giri, 45, is a duck and hen seller from Rimuli. He travels the 60 km journey in a camper van. He must shell out Rs. 100-150 for it and can’t return the same day so stays over in Koida.

He orders tobacco from Jharkhand and Bihar. Customers usually crush the tobacco in their palm with their thumb and mix it with quicklime. Some mix in a few drops of water and chew it.

Bhavan Das has six children and hopes none of them will follow him in what he does. “I don’t want my children to go down the same path as me. I am not proud of what I sell, and I am well aware that it is harmful to one’s health, but I am forced to do this to support my family,” he said. He also urged us not to eat or take any tobacco.

The middle school students who reported this piece are in the learning enhancement programme of non-governmental organisation ASPIRE (a society for promotion of inclusive and relevant education) and the Thousand School Project of Tata Steel Foundation. They did this story as part of a project to learn about their surroundings.

The PARI Education Team would like to extend a heartfelt ‘thank you’ to Lovely Nigam and Smita Agarwal for their help in coordinating this piece.

Surubali Munda, Puja Munda, Almuni Sandil and Saraswati Sulanki are students of Class 5, 7 and 8. They say the interviewing process gave them the confidence to speak to strangers.

Their visit to the market also brought them face-to-face with the garbage and pollution they saw there. And they returned to carry out ‘Project Dustbin’, an attempt to educate and  inform sellers and buyers about the need to keep their surroundings clean. They even returned a week later to check on the progress.

Anushka Ray interning with PARI Education, worked closely with the reporters of this piece.