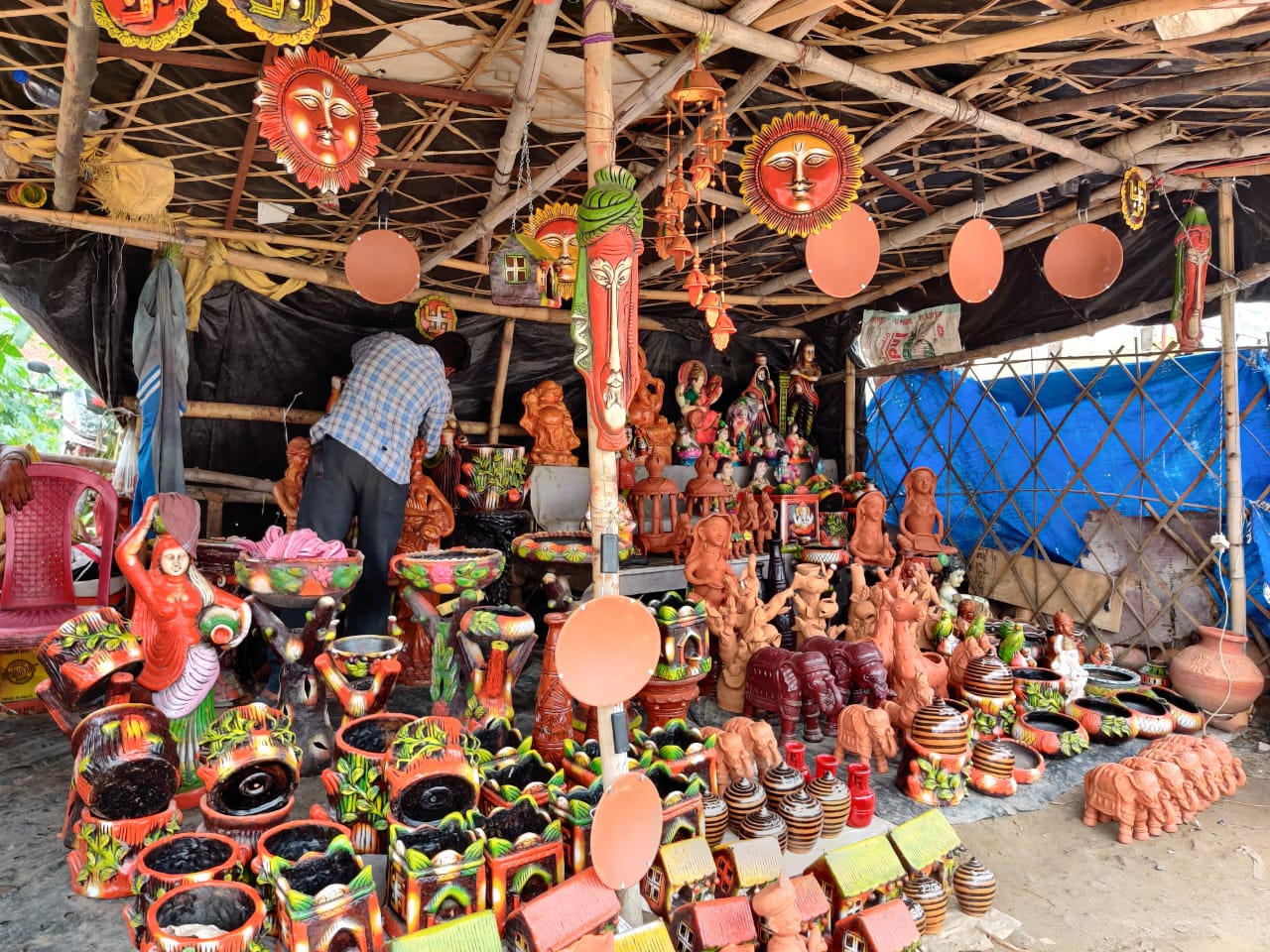 December 1, 2020
Chinhat, Lucknow, Uttar Pradesh
Covid 19, Things we do, Things we make
Diwali is the high season for pottery traders. But slow sales during the lockdown and fears of eviction from their pavement stalls, has set a new low
Student reporter: Garima Sadhwani

“Bhaiya, 700 rupees is too much,” says a customer to pottery trader Sachin Sharma, 23, as she eyes the terracotta pots and brightly coloured pieces lined up in the stall. Sachin tries to convince her to buy at the marked price, but she leaves empty-handed. Arranging the statue back among the other pottery pieces, he says, “I’m not getting as many customers as before, and those who come, bargain even harder. If we don’t reduce the price, people don’t buy. The pandemic has been very harsh.”

Pottery traders like Sachin hoped matters would improve around Diwali when diya sales are high, but the continuing lockdown has dashed their hopes. During Diwali, his family puts up four stalls in different areas of Lucknow, but they saw a very poor turnout. He used to be able to make Rs. 10,000 to 12,000 a month earlier, but now he says he can barely make Rs. 5,000. “I haven’t got back even half the amount I had invested. Rich people didn’t step out of their homes, and those who came were reluctant to spend too much on pottery,” he said when we met after Diwali. “If you buy food, it can feed you six months. But what will they do with this pottery?” he added wryly.

Mohammad Arif, 38, is a pottery trader with a stall in Indira Nagar, about five kilometres away. Usually, all his stock would get sold during Diwali and he would have to order more statues and terracotta pieces. Pointing to a matka (round pot used to store water), he says: “Last year, people would buy this for 300-400 rupees, but this year nothing is selling. A lot of items remain unsold. I had to borrow money to pay my suppliers,” he says, adding, “I could make up to 5,000 rupees on a good day, but now I am able to make only a third of that.”

The Chinhat pottery sellers rely on the annual Lucknow Mahotsava exhibition for sales, but it has been cancelled for 2020 due to the lockdown. The annual 15-day festival of local handicrafts, attracts many customers. An official of Uttar Pradesh’s tourism department who did not want to be named, says, “About 10-15 stalls of Chinhat pottery are put up every year, and about 2-3 lakh people visit the stalls every day. They could earn anything from 10,000-50,000 rupees a day.”

Every year, Sachin and his family would put up stalls at exhibitions in neighbouring cities, such as Agra and Jhansi, and in neighbouring states, such as Jharkhand. However, this year, given the poor sales in Lucknow, they are reluctant to do so. “One can’t completely rely on exhibitions. If I buy space for a stall at an exhibition, and hardly anyone turns up, I’ll have to give the customer the products at whatever price they ask. I can’t come [back] empty-handed after investing money,” Sachin says.

Faizabad Road in Chinhat was once a vibrant hub of pottery shops in central Lucknow, the capital city of Uttar Pradesh. It used to rank among Lucknow’s best-known handicrafts, alongside zari-zardozi, chikkankari and attar. This decorative pottery made of clay or terracotta usually includes statues, dolls, religious idols and more. They are painted or glazed in bright reds, browns and greens, with detailing in lighter colours such as white and orange. “People prefer terracotta statues because they are thick and layered, and don’t break easily. Those who actually understand [and appreciate] terracotta, don’t bargain much,” says Sachin.

The 2018 One District, One Product scheme introduced by the UP government to ‘encourage indigenous and specialised craft’ does not include Lucknow’s Chinhat pottery, but only chikkankari and zari-zardozi crafts.

Chinhat pottery is sold in other parts of the city too, but the lockdown has hit sales everywhere. Dinesh Kumar, a trader in Mawaiya, away from the city centre, says “I’m finding it difficult to sell the stocks I had bought at the beginning of the year. Before the lockdown in March, I used to get 30-40 customers a day, now there are hardly 10 customers.”

Sachin grew up in Chinhat and still lives here with his parents, elder brother and sister-in-law. “The market used to be huge. There used to be stalls from here till that petrol pump,” he says, pointing to a stretch of approximately one kilometre on Faizabad road. “Now there are just a few stalls, spread on either side of a busy road. I don’t know what the future holds, but I just want to make enough to survive,” he says.

Temporary stalls like Sachin’s, are located on the pavement and the owners must pack up and carry all their goods when they leave for the day. The threat of eviction and loss of property is holding back other sellers from setting up shop again here.

Sachin has already moved his make-shift thatch-covered stall once in the past two years, from the opposite side of the road: “Some showrooms there complained [to the municipal corporation] to have our stalls removed. I tried very hard to save my stall but I couldn’t.” He stores his stock in a vacant plot of land behind the stall. “I take care of this plot for someone, so they allow me to keep my stock here. But if they decide to sell or build on it, I’ll have to find another place,” he says.

Behind the stall are cans of paint and mud sculptures. “I paint statues of animals, people and decorative items. I learnt by watching others. Earlier, I’d use only copper and gold colours, now I paint with many more colours,” Sachin says.

The pottery output in Chinhat has declined over the years and now pottery traders buy from nearby Kakori and Gorakhpur in Uttar Pradesh or even further away from Siliguri in Assam.

Ismat-ul-Nisar, 61, also grew up in Chinhat and her family has been making and selling pottery for over 25 years. Her stall is on the opposite side of the road to Sachin’s. A few men in her family are still potters but their output is not enough and so she buys pottery items from Kakori. “My husband Qadir used to work at a porcelain factory in Malhaur [a few kilometres away]. Now he owns a karkhana [warehouse] where we store our products.” At the end of the day, she packs up her stall and takes everything back to the warehouse there in a battery (electric) rickshaw.

“During Diwali we sell many extra products, and it isn’t possible to carry them back and forth. We keep everything here and stay during the nights,” she says. Ismat’s grandchildren Shoaib, Sughra and Shafaz also help her during the busy festive season. With the lockdown and their schools shut, they are here more often.

This summer, Ismat lost about Rs. 3,000 when the authorities confiscated, broke and threw her products away in a move to evict her from the footpath. “My business has been suffering because Lucknow’s Nagar Nigam [city municipal corporation] has been trying to evict us from the pavement,” she says. “The same thing happened to other vendors as well. Many vendors whose stalls were removed won’t come back as the Nagar Nigam is being very strict.”

Fearing loss and eviction, many potters have moved to the outskirts, but Ismat is determined to stay. “We have been doing business here for several years. Customers [used to] come in large numbers because they [could] find a variety of products,” she says.

In the past, pottery products have struggled against mass-produced and durable alternatives. “Three decades ago, people used utensils and crockery made of copper and clay in their homes. Then as stainless steel became cheaper, people started buying it for daily use. That’s when the clay crockery markets started losing business,” says Lalit Sadhwani, a long-time Lucknow food retailer.

Mohammed Arif, Ismat’s son, says: “Our business is going down because we don’t have any facilities. We don’t get chalk easily to make pottery. If we somehow manage to arrange for chalk from other places, the police stops us on the way. We can’t set up our own factories. We don’t even have a permanent place for our stalls. It’s only to earn our bread that we keep returning to the footpath.”

Garima Sadhwani is doing a P.G. Diploma in Print Journalism from the Asian College of Journalism, Chennai. “When I was first assigned the topic of handicrafts, I thought I would write about chikkankari, but research led me to other traditional handicrafts in Lucknow.” She adds: “Pottery might not be the pride of the city anymore, but it is still the livelihood of many families. Telling their stories becomes all the more important, because of the negligence they face from the government and authorities. Working with PARI Education made me realise how many different layers there are to each story. You can't possibly write about the plight of a profession, or of people by meeting them just once. I went back to Chinhat five times to talk to Sachin and Ismat, and each time I came back, it was not just the story, but my understanding of their profession that was enriched too.”