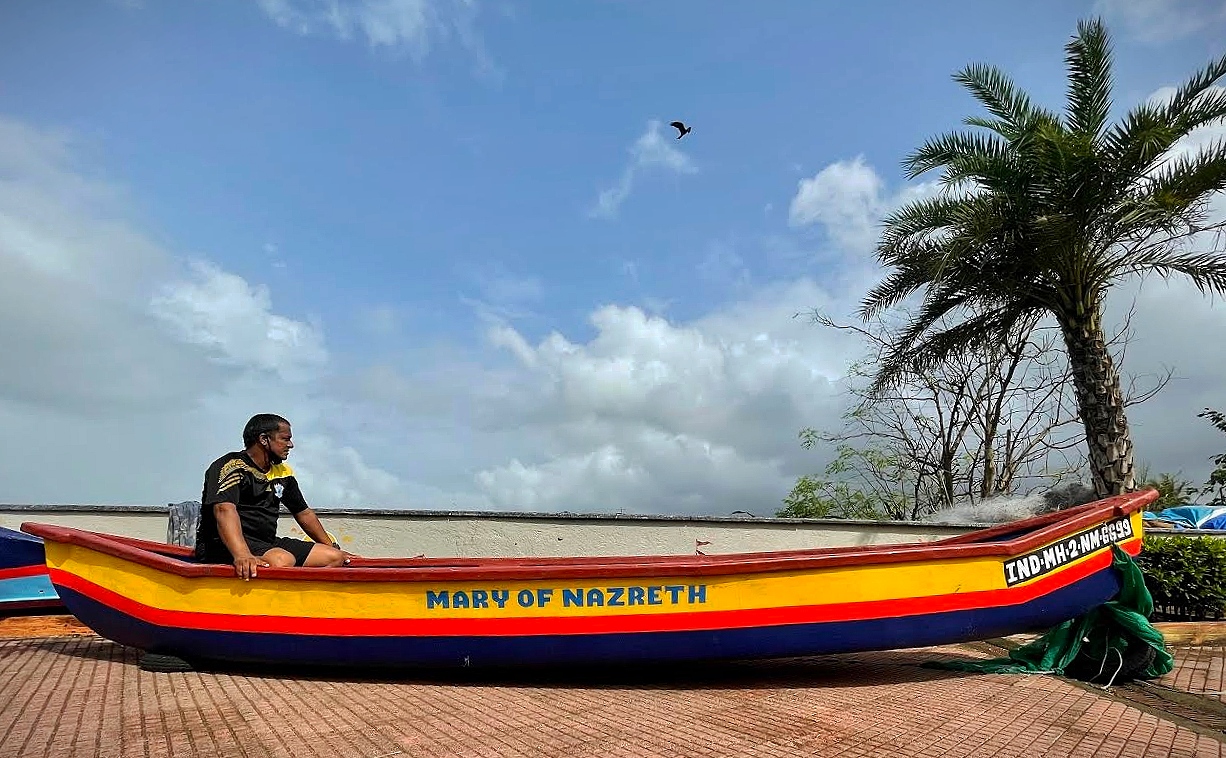 March 8, 2022
Ranwar village, Mumbai Suburban district, Maharashtra
Covid 19, Things we do
A rising football coach, Oniel had to return to fishing during the lockdown. This switch has not been without its challenges
Student reporter: Shristi Murli and Rutuja Gaidhani

Oniel had a set routine before the first lockdown. “On Mondays, Wednesdays and Fridays I would coach at the Bandra Coziem, and the other days I would be at the Islam Gymkhana in Marine Lines, south Mumbai. For more than a decade I did this,” said the 43-year-old football coach Oniel Clarence Kalicharan.

Covid-19 and subsequent lockdowns changed that. The sudden halt in all the physical activities from March 25, 2020 forced him to put his coaching on hold and return to his family’s profession of fishing, to make a living.

“The lockdown left me with no option but to start fishing thrice daily,” says Oniel Clarence Kalicharan when we met him. Shallow waves splash against the walls of his wooden boat named ‘Mary of Nazareth’. It’s anchored on the shore of the Arabian Sea at the Reclamation in Bandra.

Half a dozen football trophies line the loft of his home in the fishermen’s chawl where he lives with his 48-year-old brother, Sanjay in Ranwar village in Mumbai.  It’s a single room with a kitchen and a mini fridge in which they store the fish they catch.

As a young man, Oniel says his passion for football was obvious and when was only 16 years old he started his own women’s football team, ‘Bandra Packers’ in the year 2000. Four years later, unable to support himself as a coach, Oniel got a job at Star Professionals working in the sound department. “It was a lot of work at a low salary. I worked there for four years because I needed the money. Finally, in 2007, I began proper, full-time coaching,” he recalls.

His football and coaching skills got him the job of a coach at the Islam Gymkhana and the Bandra Coziem in Bandra. “It was never hectic and I was happy,” he says referring to his weekly schedule of coaching that earned him Rs. 8,000 – Rs. 9000 a month.

As a teenager, Oniel had juggled jobs to support his family. “I lost my father before I was born; I never saw him,” he said. His mother was a domestic worker, serving 3-4 houses and earning around Rs. 2,000 a month. In Class 6, his mother’s deteriorating health meant that Oniel had to drop out of school and look for a job.

In 1999, at the age of 15, he started working for a friend who was the owner of the Caje Cables. “My friend taught me everything related to sound cables. My salary was 750 rupees a month in the beginning and eventually I started earning two to three thousand a month,” he says of the time before he became a coach.

For the last 20 months, on more fortunate days he catches two to three dozen mullets, dolas, khajri, catfish, ekru, crabs that fetch him Rs 600 – Rs 800 at the Khar Danda market in Khar, Mumbai. Sometimes it could be a mere Rs. 200 – Rs 300. “We can never be sure of our catch. So, the income is always uncertain,” he told us.

The brothers follow what they refer to as the ‘Vahana system of fishing’: when the water in the Arabian Sea recedes, a nylon net is spread and fixed with sticks and stones, creating a circular trap and fish get caught in this trap as the water rises. The nets are removed once the sea recedes.

Oniel and his brother were navigating the lockdown in this way until cyclone Tauktae hit Mumbai in May 2021. “We had previously seen cyclones on the television, but had never experienced one in real life, this was the first time. We tied the boat on both sides and its anchor, and parked it at Mahim Beach near the Reclamation in Bandra. The cyclone broke the ropes and the wind carried the boat towards the rocks. Our boat was severely damaged,” he said.

It’s been eight months now and the brothers are out of work. Oniel has taken up odd jobs like cleaning and painting houses. His coaching work has started but the number of players has reduced considerably and so has his income. “Only 2 or 3 students came for six months. The last two months [July and August] no students came and coaching stopped completely,” he said.

Oniel and his brother have not been able to get any compensation for their damaged boat as their license was not up to date. “Many fishermen are unaware that a boat’s registration number along with valid certificates and insurance papers are necessary to claim any government aid or even insurance for that matter. Documents have an expiry date as well,” pointed out a member (who did not want to be named) of a society of fishermen that Oniel belongs to.

“We did not know that we had to renew the registration number and by the time we got to know it was too late,” said Oniel. “We have been offered help and money by people who know us and the hardships we are facing. Some are giving us dal and chana. How do we fishermen survive if there is no boat?” he asks.

Oniel the coach now refers to himself as a fisherman.

This story is part of a series on lives under lockdown. The team at PARI Education would like to thank Akshara Pathak-Jadhav and Perrie Subramaniam, professors at St Xavier’s College (Autonomous) Mumbai, for leading this collaboration.

Rutuja Gaidhani and Shristi Murli are second-year students of Mass Communication and Journalism at St. Xavier’s College (Autonomous), Mumbai. As part of their college course in collaboration with PARI Education on lives under lockdown, they chose to write about the impact Covid-19 on a community of fishermen in Bandra, Mumbai. "We thought our engagement with PARI would only teach us journalistic writing, but we learned a lot more, especially how to bring out the voices of people in-focus,” Rutuja says. Shristi adds: “We are taught that journalism is about finding the facts - and it is - but it's also about knowing people rather than only finding information for the story. This was an enriching experience in trying to understand life from another person's perspective."