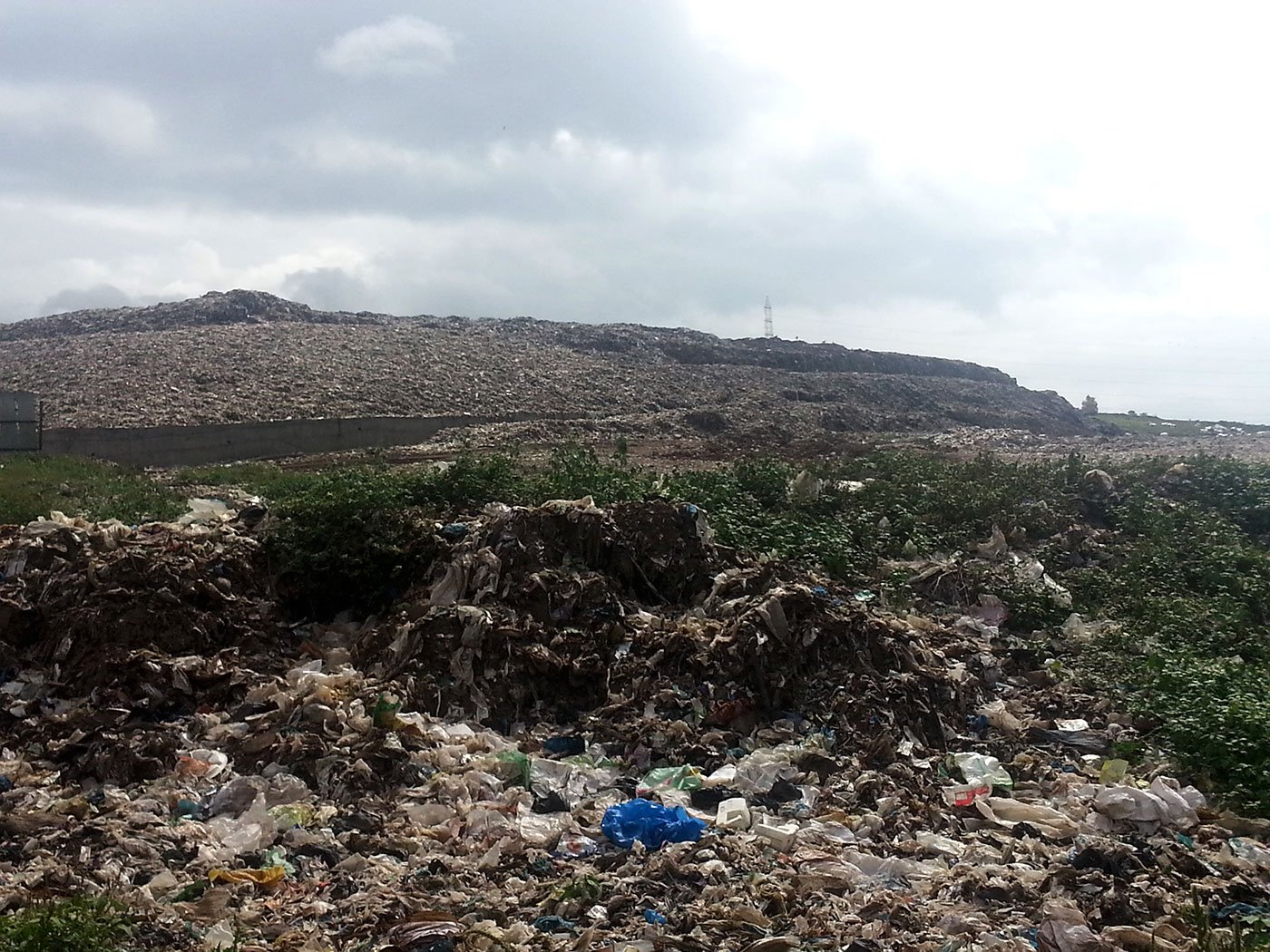 Shailendra Bajre has a grim expression while speaking of his fields. He hasn’t worked on them for more than 15 years. “It’s the garbage depot here – all the toxic waste from it has percolated into the groundwater. The water from the borewell is dirty and we can’t use it to farm because it will spoil the crops and damage the soil,” he says.

The dumpsite that Bajre speaks of is located in his village, Uruli Devachi, around 17 kilometres from Pune. From a distance, the tall mounds of garbage around the village can look like impressive natural hills. But in reality these are heaps of waste piling up in close proximity to shops, schools and homes for more than 30 years.

In 1981, the government of Maharashtra allotted 43 acres of land in Uruli Devachi for the city of Pune to dispose of its waste; another 120 acres were provisioned in 2003 in nearby Phursungi village to handle the city’s unrestrained growing garbage. Until March 2014, the Pune Municipal Corporation (PMC) disposed of around 1,100 tons of Pune’s waste at the two sites. After a prolonged and still-continuing protest by the villagers, the amount was reduced to 500 tons in October 2015.

The reduction has not stopped the air and water from getting increasingly polluted. In 2014, the people in the affected villages, through advocate Asim Sarode, filed a petition with the National Green Tribunal’s (NGT) West Zone Bench. A round of interim directives followed and the final hearing at the NGT is scheduled for August 17.

Since the garbage is untreated, leachate has been seeping into the ground and the groundwater has become unsuitable for farming. Ranjit Raskar, a member of the Phursungi gram panchayat , speaks of the impact of the leachate: “The vegetables in my fields now have a higher lead content. This is very risky and can affect health.”

Partha Biswas, a Pune-based reporter with the Indian Express , who has written extensively about this major environmental issue, says that some of the land has turned barren over the last few years. “The village had fields of maize but most of them have got destroyed due to high levels of mercury and contamination,” he says.

An amended application filed by the petitioners in July 2016 before the NGT includes observations from an inspection done in September 2005 by the Maharashtra Pollution Control Board. It says that the sub-regional officer who conducted the inspection noticed the lack of scientific processing of the garbage, because of which huge heaps of waste have collected. Water percolating from these heaps flows across the Katraj-Saswad bypass road and has contaminated the Kala Odha and Pharsicha Odha, two streams that meet the Mula-Mutha rivers near Manjari village. The toxic waste, the officer observes, endangers the lives of people residing in four gram panchayat areas: Uruli Devachi, Phursungi, Shewalwadi and Manjari, which, he notes, are together home to around 400,000 people.

The contamination has left cultivators like Bajre with no source of clean water to irrigate their fields. Bajre’s income now comes from a small construction business. Many others have been forced to look around for alternative sources of income; some have taken to plumbing, others have become security guards.

“If I use polluted water, it will affect the soil and the produce,” Bajre says. “Even the water in the well has been affected. It has turned dark and oily. It can’t be used anymore. Most of the farmers here are dependent on rainfall. The PMC provides water tankers only for drinking purposes.”

Mahendra Shewale, deputy sarpanch of Uruli Devachi, has eight acres of land on which he grows vegetables, and jowar, bajra and other grains. He uses his well to irrigate his farms but laments that the quantity of produce has gone down. “Until ten years ago, I used to harvest 20 quintals of wheat in a year but now I manage to grow only up to 10-12 quintals annually. The quality of the vegetables I harvest has gone down too,” he says.

The petition before the NGT also speaks of the health impact on the villagers of the unrestrained dumping by the PMC. In Uruli Devachi, the monsoon especially does not spell good news. The heightened odour and fumes from the damp garbage dump travel all over the village, causing a spurt in diseases. Bajre is only one among many who has persistent headaches. There have been a number of dengue cases too.

To compound the already dreadful situation, villagers barely have any access to health care. “The PMC has set up a primary health care centre and the medicines are free of cost,” Bajre says, “but the doctors only visit twice a week.” Balasaheb Bhapkar, who works as a plumber in Uruli Devachi, is upset about the shoddy state of government hospitals. “I spent 75,000 rupees when my wife got dengue. I admitted her to a private hospital. The government hospitals don’t have enough doctors and facilities. If the PMC continues to dump garbage in our village, they should at least make sure that our health expenses are taken care of.”

Besides ill health, the landfill has also led to unexpected social implications, says Shewale. “Not many are willing to marry their daughters into families who live in this village. When I have guests at home, they are reluctant to drink the water I serve them.”

Despite numerous complaints and protests by villagers, the municipal corporation has been excruciatingly slow in finding an alternative dumping site.  “Leaders have come and gone, making false promises,” Bajre says, “but it is us who live here and suffer.” This has forced many people to leave Uruli Devachi and Phursungi and settle in Pune. Oddly though, land prices have boomed in the two villages, where agricultural land is now being sold as non-agricultural plots. Many who cannot afford a house in Pune city are now looking to buy land in these villages. Their proximity to Pune makes them attractive real estate. “And so, agriculture has almost vanished,” says Biswas.

The villagers are now seeking the full closure of the garbage depot. They are hopeful the NGT’s order will shut down the dump site. “When we stopped the PMC’s garbage trucks from entering the village in August 2014, the entire city of Pune suffered because their garbage wasn’t entering our village,” Shewale says. “But their suffering lasted only a few days. How would you like it if someone comes to your house and dumps their garbage there every day?”

Vijayta Lalwani graduated from the Symbiosis Centre for Media and Communication, Pune, in 2016. This article was written as a part of the her internship with PARI in October-November 2015.

This article was originally published on the PARI website on August 10, 2016.