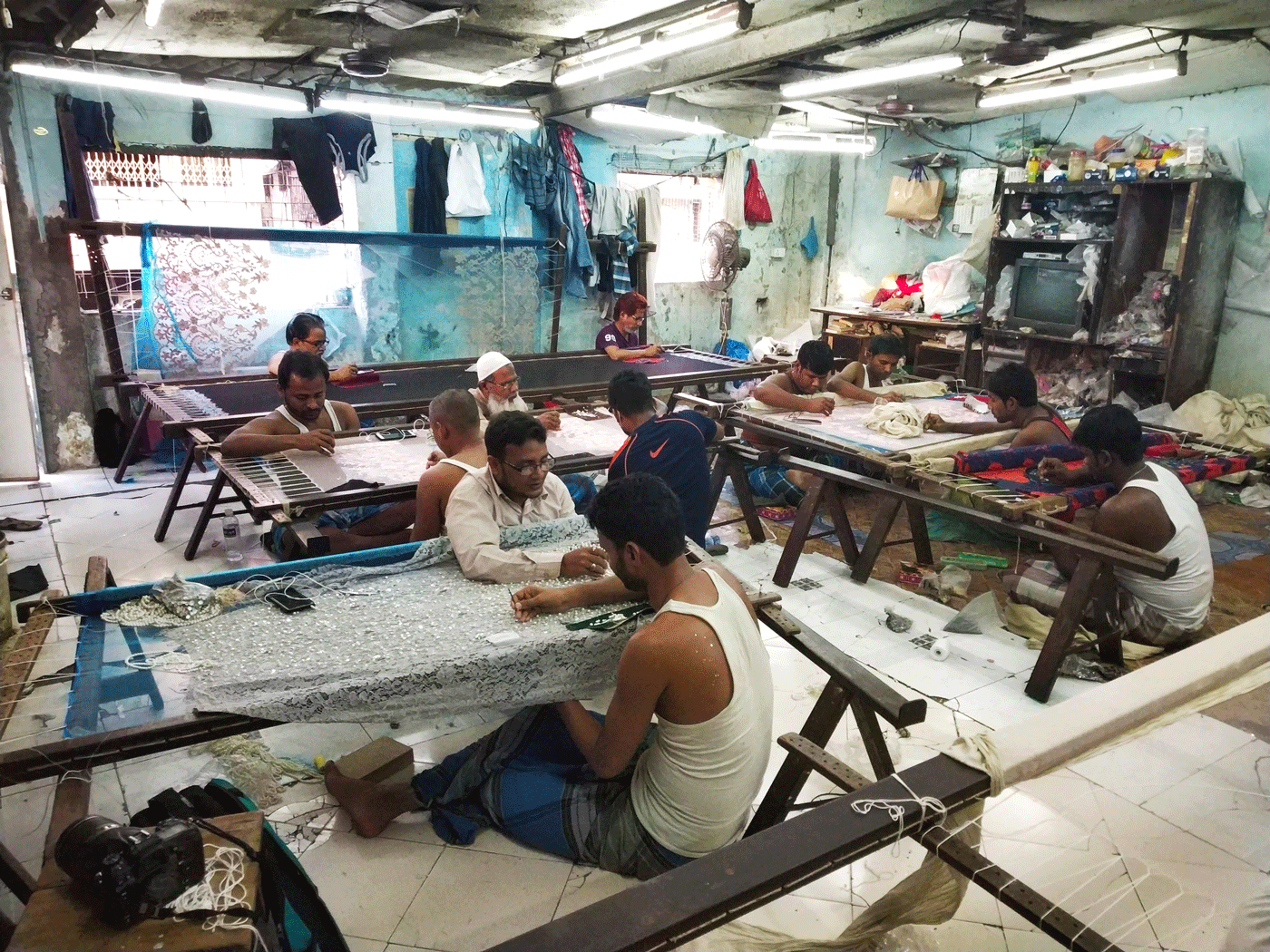 April 2, 2020
Mumbai, Maharashtra
Migrants, Things we do, Things we make
In a small zari workshop in Mahim, Mumbai, Mohammed Shamim has worked for a decade sewing plastic pearls and petals on fabric, to send money home and save enough to sometimes visit his village in Bihar
Student reporter: Urja

Mohammed Shamim is planning to carry aflatoon for his family back home in Kharaj (Dinmanpur) village in Samastipur district of Bihar. “It doesn’t get spoilt during the 36-hour journey, and it’s the best mithai in Mumbai,” he says of the ghee and mawa-based delicacy. It has been six months since Shamim has gone back to Kharaj and he is preparing weeks in advance for the visit. His wife Seema Khatun wants him to bring “a Bambai style suit [salwar kameez],” a hair oil, a shampoo, a face cream and another gift that he is shy to speak of.

Sitting on the floor, Shamim is rapidly weaving plastic leaves and flowers into a netted fabric tied to wooden logs from all sides. He has been working at this workshop – “everyone knows it as Aslambhai ka karkhana” – in Mahim in central Mumbai  for nearly a decade, since he first came to Mumbai for zari work.

In the karkhana, clothes, bags and mattresses are kept on racks in a small side room. Up to 35 workers – most of them are migrants – sit at a time for zari weaving in the 400-square feet main room. Many of them sleep in the same room at night. The ceiling fan is not enough during the summer, so, Shamim says, smiling, “Everyone wants to sleep close to the only pedestal fan in the room.”

Traditionally, zari was made with strands of gold or silver alloy woven into yarn; it now also refers to threading with copper or cheaper alloys, or embellishment with various other materials, including glossy plastic. At the Mahim workshop, the weavers embroider zari with metallic thread too, depending on the orders placed by buyers – usually, stores and  fashion designers.

Shamim, now 40, started his journey toward this small room when he was around 15. He had only studied up to Class 5 in an Urdu-medium school. His grandfather and an uncle took care of the family after his father Mohammed Safik, was diagnosed with kala-azar (an illness caused by the bite of a sandfly), and remained ailing for over a decade. If he had not taken up zari work, Shamim says he too would have been a butcher, like his father.

“Then my mother requested my paternal uncle to find me a job in Delhi, where he was a tailor,” he recalls. “That was in 1994. I cried on the train to Delhi from Samastipur. My uncle offered me mithai but I didn’t want anything except my home at that time. All young boys cry before going to another city to learn zari work.”

In Delhi, Shamim started working as a helper in a refrigerator factory. But an old fracture on his right hand made it difficult for him to carry heavy objects. “The fracture had healed but my hand would still swell up every time I carried weights,” he says, embroidering plastic pearls onto the netted fabric.

So his uncle introduced him to a friend who was a zari weaver and asked him to teach Shamim. During a one-year apprenticeship in Delhi, Shamim was not paid but got food and a space to sleep in the workshop. “The first three months they taught me easy handwork [stitching on the zari]. It took me a year to become good at it,” he recalls. For some years, Shamim worked in several localities of Delhi as a zari weaver. Over time, he matched the speed and precision of other zari artists and started earning Rs. 65 a day.

When a former colleague in a zari workshop in Raghubir Nagar in Delhi, who had shifted to Mumbai, advised Shamim to move here too, he started making plans. In 2009, he came to Mumbai. He was initially terrified of the big city, he says. His acquaintances here had told him there is “taporigiri” (rowdy behaviour) in the city, and outsiders were harassed. “People would say ‘maaro Bihari ko, Bengali ko, Bhaiyya ko’. Now things have changed.”

Shamim and Seema got married when he was 20 and she was 15. Their  son, Mohammed Irfan, 10, and a daughter Mantasa Parveen, 8, study in a government school in Kharaj, their village in Khanpur block of Bihar. The eldest son Mohammed Imran, 16, is writing his Class 10 exams and doesn’t wish to study further. He plans  to work with his grandfather as a butcher.

Shamim does not want him to come to Mumbai for zari work because, he says, it takes a lot of effort for low wages. “I introduced my younger brother to zari and handwork, but he didn’t even continue learning it, neither did my khala’s son [cousin].”  His brother now works in a shop in Gurugram, carrying parcels on a cart for deliveries, and the cousin switched to tailoring. “I don’t want my son to be underpaid and overworked like I am,” Shamim adds. “I want this art to die with me.”

When Shamim turned 30, threading the needle became difficult – despite the 14 tubelights in the Mahim workshop – and his vision became blurred. The eyesight of zari workers usually deteriorates after some years of work. Pointing his needle at his  co-worker Abdul, he playfully says, “He got married a year ago and does not wear glasses, he doesn’t want to look like an old man, as I do.”

Shamim and his co-workers get their tiffin from a woman in the neighbourhood. “But I like Dilli better, Kharaj was closer and the food was more delicious and cheaper,” he says.  The tiffin service costs Rs. 450 for 12 meals over six days. It includes non-vegetarian food twice a week, usually chicken and sometimes buffalo meat. Shamim says his wife cooks much better beef than the meat in his tiffin, it’s not so bland.

On Sundays, a holiday, the workers eat outside, and sometimes Shamim goes to the seaside in Mahim to catch the breeze, or to the nearby Baba Makhdoom Shah dargah. In a few weeks, he will board the cramped general compartment of the Pawan Express to go back to Kharaj (Dinmanpur). The metal roof on his house needs to be replaced with a cemented ceiling, which will require him to stay back for about a month. “Helping my father with khatik work [the butcher’s business] is the best option when I’m on a leave, it keeps the money [between Rs. 100 and Rs. 400 a day] coming in,” he says.

“I can’t afford to get into a new line of work, it will require a year or so to get hold of it. How will my family survive till then in the village?” he asks, before his voice is drowned out by the azaan from a nearby dargah.

Urja was a bachelor's student of Journalism and Mass Communication at the Bansathali Vidyapith, Rajasthan when she did this story. In her final semester, as part of her course, she interned with People's Archive of Rural India in Mumbai for three months. New to the city, she was drawn to migrants like herself and curious about their lives and livelihoods. She met many zari workers and spoke to them at length about their art and craft, their cramped living and working conditions and their strong ties to home. PARI's editors guided her in putting this story together.

This article was originally published on the PARI website March 14, 2019.